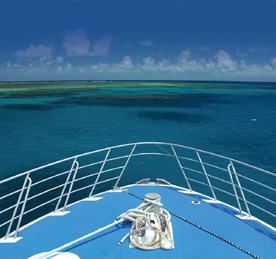 For many people, the appeal of a cruise is the promise of pristine waters and natural landscapes, perhaps even the possibility of glimpsing a pod of dolphins frolicking in the distance. Yet cruise ships have long suffered a reputation for being cavalier about their impact on the very environments they advertise to potential passengers, whether through using dirty fuels or indiscriminately dumping grey water.

It’s the latter that has been making a splash in recent months. In August 2018, a P&O cruise ship spilled 27,000L of food waste and grey water into the Great Barrier Reef Marine Park, potentially damaging an environment that is already on the brink of collapse because of climate change.

Grey water, which is produced by cruise ships at a rate of about 250L per person each day, comes from showers, baths, laundry, dishwashers and galley waste water. It contains nutrients, such as nitrogen and phosphorus; oil and grease; detergent and soap residue; metals, such as copper, lead and mercury; bacteria; pathogens; hair; organic matter, including food particles; suspended solids; bleach; and pesticide residues.

Untreated, its impact on vulnerable ecosystems can lead to shellfish contamination, algal blooms, lowered oxygen levels in the ocean and the introduction of microplastics.

However, while vessel sewage has been regulated internationally since 2003, there are currently no international regulations to prevent the damage that grey water can have on the marine environment and, ultimately, human health.

Certain regions, such as the Great Lakes in the US and protected areas of Svalbard, among others, have local legislation governing grey-water discharge; while the release of pollutants in the Great Barrier Reef Marine Park is an offence under the Protection of the Sea Act. Carnival was required to provide a A$2.1 million ($1.5 million) ‘undertaking’ (fine) following the recent spill.

“Grey water is such an under-reported threat, much more so than oily water, black water and sewage. It overloads the biological make-up of the ecosystem, is being consumed by marine life and is entering the food chain,” he said in a statement following the spill. “If we follow the spirit of Marpol Annex IV, then grey water must be added because it has a far greater environmental and human impact than any other waste water stream.”

Perhaps even more worryingly, some vulnerable regions are lacking effective local grey-water regulations, as WWF Canada highlighted in a 2018 report, which estimated that, if left unregulated, the amount of untreated grey water dumped in Canadian Arctic waters is projected to double by 2035.

It showed that current hot spots of grey-water dumping in the region intersect with important wildlife habitats, such as whale calving areas and migration routes; sensitive benthic areas, the ecological region at the bottom of the ocean; and concentration areas of Arctic char, a cold-water fish native to Arctic and subarctic coastal waters.

Grey water is such an under-reported threat; much more so than oily water, black water and sewage. It overloads the biological make-up of the ecosystem, is being consumed by marine life and is entering the food chain.
Mark Beavis, ACO Marine

“This is not only bad for wildlife but threatens food security in northern communities,” says Melissa Nacke, an Arctic shipping and marine-conservation specialist at WWF Canada.

She goes on to explain that although Canada currently has a zero-discharge regime in the Arctic that prohibits the discharge of any ‘waste’, the lack of a specific definition results in loopholes.

“Firstly, operators can claim that none of the cleaning products used on board meet the definition of ‘waste’ and become exempt from the zero-discharge regulation,” she says. “Secondly, the discharge of treated grey water is prohibited, which does not make environmental sense and discourages ships from treating grey water on board.”

250L per person
The amount of grey water produced by a cruise ship each day.
WWF Canada

There are also several issues that make it difficult or impossible for vessel operators to comply with the zero-discharge regime, according to Nacke.

“In order to comply with regulations, vessels must either offload waste for treatment or have sufficient waste carriage capacity to retain it until leaving the region. Neither of these solutions are feasible. Vessels do not have the carrying capacity to hold large quantities of grey water for extended periods of time, and the infrastructure to treat grey water ashore does not exist in the Arctic,” she says.

The situation is exacerbated by the fact that in neighbouring Alaska, grey water cannot be discharged unless it meets strict requirements concerning levels of suspended solids and faecal coliform. “This means that ships travelling from Alaska to Canada can use Canadian waters as a literal dumping ground,” Nacke explains.

Over the next four years, 28 new cruise ships with the capability of sailing through icy Arctic waters will take to the seas, but Canada’s pollution regulations have not kept up.

A$2.1 million
The fine handed out to Carnival Cruises following a spill of grey water and food waste at the Great Barrier Reef.
Carnival Cruise

“It’s time for Canada to update its regulations to meet the current and projected shipping landscape, and make sure that shipping happens with minimal impact on wildlife and the people who rely on the health of the oceans for food security,” Nacke says.

However, the onus does not only lie with regulators – the cruise industry also needs to take responsibility for its actions, and many operators have, by going above and beyond what is required by the current legislation.

Megan King is a senior vice-president of strategic communications at CLIA, which represents over 95% of global cruise capacity. She says that while cruise ships comprise less than 1% of the world’s commercial vessels, they are at the forefront of developing responsible environmental practices, and technologies that lead the world’s shipping sector in treating and disposing of waste, and reducing air emissions.

At present, 62% of global capacity is served by advanced waste water treatment facilities that are capable of meeting or exceeding IMO requirements, and 100% of new builds will have the same calibre of systems installed.

Much of the cruise industry is also ahead of the game when it comes to reducing harmful emissions, with 60% of global capacity using EGCSs to meet or exceed air emissions requirements, and 48% of newbuild capacity is set to have EGCSs installed.

Operators have a choice of installing open-loop systems, which scrub the SO2 out of the ship’s exhaust gas before discharging it into the ocean, or closed-loop systems, which keep the scrubbed exhaust gas on board until the ship reaches port and can safely dispose of it on land. In addition, more cruise companies are putting in place policies and procedures to reduce their plastic pollution.

Norwegian Cruise Line, for example, will eliminate single-use plastic straws across its fleet of 26 ships, helping the company to get rid of more than 50 million straws every year. Meanwhile Virgin Voyages, which will launch its first cruise ship in 2020, has announced plans to ban single-use plastics; this includes bottled water, condiment packets, shopping bags, food packaging, stirrers and takeaway coffee cups.

Virgin is also working with its partners to develop a technology that can transform waste into energy. “We are committed to having one of the cleanest fleets at sea and to work towards being zero discharge,” said CEO and president Tom McAlpin.

This year, the Baltic Sea will become the first region in the world to completely ban the dumping of untreated sewage for new builds. At present, the IMO’s general regulations stipulate that it can only be discharged 12 nautical miles or further from the shore.

Older ships have until 2021 to meet the more stringent rules, but many are already looking into retrofitting advanced waste water systems that will enable them to comply. According to CLIA, 83% of new builds will have systems installed that meet the tighter standards, although that number drops to 7% for existing capacity. The other option for operators is to hold the untreated sewage on board until it can be discharged at port.

The Baltic is introducing these regulations because it badly needs to; thanks to a combination of poor urban waste water management, and agricultural waste and fertiliser run-off, it’s one of the most polluted seas in the world. Yet grey water is not included.

All told, while progress is being made in the area of waste water management, there’s a long way to go before the cruise industry can truly uphold the promises it’s making to potential passengers of those pristine seas and unadulterated natural landscapes.

King concludes, “Because our ships sail the globe, it is essential that regulations are as uniform as possible and don’t entail complex differences from country to country.”

It seems that there is certainly a compelling argument that grey water requires not only local but international oversight.