For the past 70 years, SKF Marine has been part of the evolution of marine technology. Manufacturing machinery that includes Turbulo oily water separators and Simplex shaft components, the company has seen plenty of creative solutions to technical challenges - as well as the occasional decades-old problem that can only be fixed by some truly out-of-the-box thinking.

Three years ago, SKF Marine's salespeople heard from US cruise operators that their fin stabilisers needed an update. The first stabilisers reduced rolling in rough seas but contributed to drag when they weren't needed. This led to the creation of retractable stabilisers, which fold back into cavities in the hull when they're not in use. It was an elegant solution but it didn't entirely solve the problem at hand.

"The fin stabiliser has a huge opening in the hull of the vessel, and, when you go through the water, you produce a lot of drag," says Christopher Schnäckel, technical director of stabilisers and steering gear for SKF Marine. "And we were [asking], what can we do to close this opening and save fuel?"

It turned out that nothing currently existed to plug this gap in the market. The company's research and development engineers started from scratch to dream up a solution to cover the opening when the fins were retracted.

"One of our strengths is our investment in R&D. We try to solve the problems of the industry," says Schnäckel. "The most important thing was to be sure that the operating of the stabiliser itself would not run a critical damage risk because of the cover. You can imagine that when you damage those sharp blades of steel, it can have a big impact on the operating of the stabiliser."

After three years of development, the result is the SKF Dynamic Stabiliser Cover (DSC), which consists of two inflatable air cushions fitted to the dimensions of the fin box to create a streamlined cover over the opening. The cushions, made of a Kevlar mesh coated with barnacle-resistant neoprene used for amphibious military vehicles, remain inflated during normal operations using the ship's pneumatic system. When it's time to deploy the stabiliser fins, a valve is released and water pressure deflates the cushions.

"We have achieved about 90% drag reduction and in the end it means that the cruise operator will see fuel savings of more than 1%," Schnäckel says. "At the moment, there is no other solution like this on the market."

SKF Marine has worked closely with engineering firm Foreship and a cruise operator partner to assess the DSC on a test vessel to ensure safety and minimise risk. Schnäckel says his team hopes to complete final tests later in 2017 to bring the DSC to market. SKF Marine's current line of stabilisers have been delivered with the DSC installation preparation since the beginning of 2017; the cover will also be able to be retrofitted to existing stabiliser set-ups, including those installed by SKF Marine and by third-party systems.

The fitting process is designed to be inexpensive and fast, using divers to install the cushions rather than a dry-dock process. "There is no risk for the operator," says Schnäckel. "If something goes wrong with the product, you can send your diver to the cushions, cut it out with a knife and it will be fine, and that is one of the biggest advantages of this product. That's a very important thing for our customers in terms of risk and in terms of safety for the passengers."
Schnäckel's team is now looking at further applications for the cushion technology, starting with covering other underwater openings in the hull in order to reduce drag, bring down operational costs and lessen environmental impact. After the success of the company's partnership with a cruise line on the DSC project, SKF Marine is keen to work closely with other operators to solve more of the industry's machinery problems. With the DSC due for release in just a few months, SKF Marine is ready for more innovation. 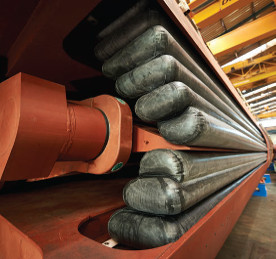 SKF Marine has created an innovative solution to fin stabiliser problems in the cruise industry.