Significant leaps have been made in ship repair and recycling, with the opening of the Mediterranean's biggest dry dock and the dismantling of the Costa Concordia. Both projects were led by San Giorgio del Porto, and its subsidiary Chantier Naval de Marseille now runs the dry dock. Ferdinando Garrè, CEO of the parent company, tells the story.

What challenges did you have to overcome when building the Marseille Fos dry dock?

Ferdinando Garrè: I came to Marseille for the first time 30 years ago, and I was immediately impressed with the size of dry dock ten. It was then that I realised the great potential of the Port of Marseille Fos for our activities. When, 20 years later, the port decided to open the bid for the management of the dock, we saw it as a great opportunity, so we created Chantier Naval de Marseille.

It took us a few years to make dry dock ten operational again; this happened in October 2017, after the Port of Marseille Fos completed much needed repair works. Even with this substantial delay, the inauguration of the biggest dry dock in the Mediterranean represents a key milestone for our company. We have now entered a second phase: the consolidation and strengthening of what is now one of the main hubs for the repair and maintenance of cruise ships and, potentially, all kinds of vessels.

What were your biggest takeaways from the Concordia ship recycling project?

The dismantling and recycling of the Concordia represented one of the most important green-ship recycling projects ever carried out in Europe, having been the first to respond to the environmental and work safety criteria established by new EU regulation. Operations were completed in July 2017, after three years of work from up to 350 operators, who worked approximately one million hours, with more than 78 suppliers. At the end of the project, about 90% of Concordia was recycled, which was more than 53,000t of materials. Together with Fratelli Neri, we used our experience to invest in the Port of Piombino, Tuscany, to establish Piombino Industrie Marittime. We expect that Piombino will become a point of reference for modern, safe and sustainable ship recycling. Moreover, the success of the Concordia project recognises the high value of Italian naval engineering, and demonstrates the importance of ship recycling that respects the environment and the safety of workers.

What other projects were you particularly proud of in 2017?

Seeing Marseille dry dock ten become fully operational was a moment of great pride for San Giorgio del Porto, Chantier Naval de Marseille and for me, personally. The arrival of the first three cruise ships and the performance of the scheduled dry-dock works - including MSC Orchestra's scrubber installation, an AEDG project for Costa Magica and the Solas Project on Costa Pacifica - meant a lot to all of those who have worked hard in the past few years to achieve this important goal.

How do you plan to improve your Genoa facility?

We are looking forward to the tender for the privatisation of the dock authority Ente Bacini, which is expected to take place in 2018. Some steps were already taken by the port authority at the end of 2017 to prepare for the call for tenders. Since then, we have been waiting to learn the details and it is our intention to participate.

Genoa in Italy remains key to our operations, and we hope that the conditions remain favourable for our continued investments going forward.

Things are moving forward to make the new yard, Piombino Industrie Marittime, operational in the coming months. This aims to be the first pole in the Mediterranean with leading standards for ship dismantling and recycling. The new multipurpose shipyard can also accommodate the construction of ship hulls, including cruise ships that measure up to 250m long, thus offering a turnkey solution to those operating in this sector.

We believe in the importance of this project and of green ship recycling activity, and we are working tirelessly to make it happen. Of course, we will need the regulations to be enforced and for ship owners to be willing to invest in environmentally sound ship recycling. 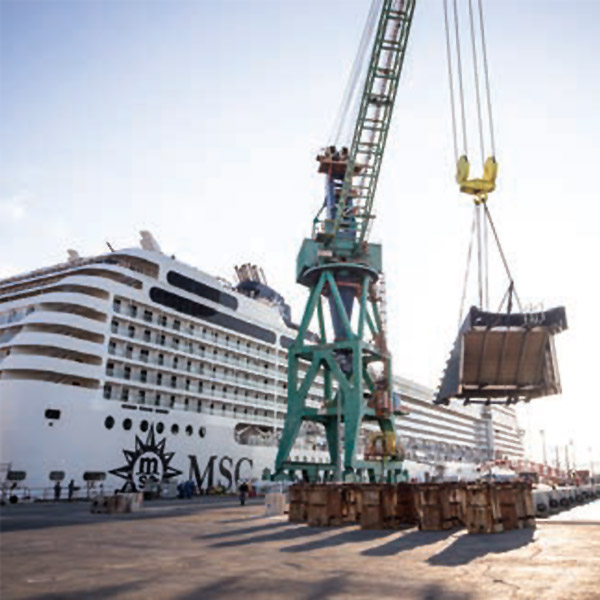 Working on the MSC Orchestra’s scrubber installation was a highlight for both companies.