The repair and refit of a cruise ship is a complex task that requires an ability to combine attention to detail with an eye towards long-term planning. Ramón Lara, commercial manager at Navantia, outlines how the company has evolved from managing construction shipyards in Spain to becoming a major repair and refit contractor for the cruise industry.

When was Navantia founded and where is its traditional base of operations?

Ramón Lara: Cádiz-San Fernando shipyard is a part of Navantia, which is a publicly controlled company that operates a number of repair and new construction shipyards throughout Spain. Our shipyard has been in operation since 1750 and opened the larger-downtown Cádiz repair facility in 1891. Historically, the Cádiz yard was a commercial and naval vessel repair facility that had established a reputation for reliability, particularly with large, complex projects.

Navantia has a well-earned reputation for excellence, complemented by an ability to deliver ships out of the repair yard on time and on budget.

What were the reasons behind the company’s decision to branch out into repairing and refitting cruise ships?

Our sister yard in Ferrol has been a leader in the market for repairing LNG tankers. In 2010, Navantia made a decision to further diversify, based on the strengths and specialisations of the respective yards. It was decided that the Cádiz yard’s focus would become the cruise vessel repair market.

Needless to say, while we were certainly excited, we were also a bit concerned. Up until that time, our customer base was quite diverse and our exposure to cruise vessel projects was actually quite limited. For Navantia, the challenge was to capitalise on our existing capabilities and expertise, and learn how to adapt and apply them to the cruise market.

How does the refit of a cruise vessel differ from other repair operations?

For a ship repair yard, it is important to distinguish between the need for regulatory dockings of cruise vessels versus other revitalisations and refurbishment projects. In truth, we were perhaps a bit naive about the market and the uniqueness afforded by each type of project initially. A large revitalisation project might involve as many as 2,000 workers and subcontractors to be managed, all while working around-theclock shifts over the course of three to five weeks.

Why should customers in the cruise sector choose Navantia to refit their vessels?

This question is simple to answer: Navantia has a wellearned reputation for excellence, complemented by an ability to deliver ships out of the repair yard on time and on budget. Moreover, our yards are located in southern Spain, which has a dry climate, and is therefore conducive to repair operations, and is also well placed to service operators that ply the eastern Atlantic and the Mediterranean.

Lastly, our facilities are unsurpassed in Western Europe. We prize sustainability in our operations, and Navantia’s pivot towards the repair and refit of cruise vessels has allowed us to sustain consistent manning levels and the expertise needed to support diverse year-round activities. 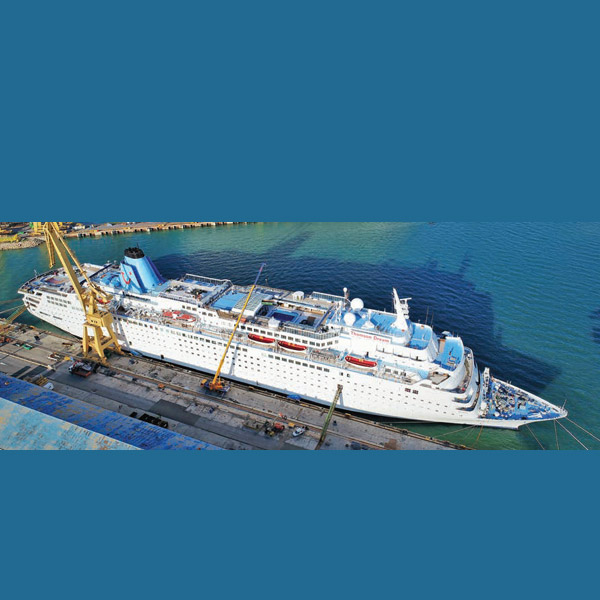 The company’s yard in Cádiz focuses on cruise repairs.