Grand Bahama Shipyard (GBS) will play host to 23 cruise vessels scheduled for dry dock in 2017. During the first half of the year, the shipyard completed work on 17 of these vessels, which are owned and/or operated by major players in the industry. Generally, the scope of works included significant propulsion and technical systems overhauls, hull treatment, accommodation and public space upgrades, and the addition of on-board attraction facilities.

Carnival Cruise Lines dry-docked five vessels to close its 2016−17 season. Each dry-dock project included work such as full hull blasting and the application of silicone coatings, and major technical projects including steel replacement in underwater areas and pipe replacements on multiple systems throughout the vessels. GBS supported the overhaul of thrusters and stabilisers, as well as the fabrication and installation of sea chests that were fitted into hulls to support the requirements of newly installed scrubber systems.

Other major technical projects included the positioning of additional diesel generator modules on four vessels and the installation of cyclo-converters. The latter was a major cooperation project between GBS, ABB and Carnival. On the hotel side, GBS supported the Carnival hotel refurbishment team with interior structural modification works on several vessels, and the construction and installation of the 'Water Works' attraction. Five vessels were docked at GBS: the Ecstasy, Dream, Sensation, Glory and Breeze.

Royal Caribbean Cruise Lines' Grandeur of the Sea received a scrubber system, enhancements to aluminium and steel structures on the upper deck, complete hull blasting and the application of silicone coating. Another noteworthy project undertaken by the shipyard was the building and maintenance of an impressive 1,500m³ complex scaffolding structure to support interior renovations.

Princess Cruise Lines returned with two vessels, the Caribbean Princess and the Pacific Princess. Each ship required the replacement of approximately 11t of steel in structural projects on the hull and upper decks. In addition, a highly skilled team from the GBS hull treatment department undertook the application of the intricate Princess Cruise Lines livery on the bow of each vessel. The Celebrity cruise liner Summit visited in April 2017 for a major Rolls-Royce Mermaid pod overhaul. The GBS team are so well versed and skilled in this work that the vessel was ready to return to operations within seven days of going dry.

Norwegian Cruise Lines (NCL) dry-docked five ships in the first half of 2017. NCL's Sky docked for works that included ultrasonic thickness measurement surveys on pool structures and the replacement of galley equipment. GBS supported Rolls-Royce on the overhaul of controllable pitch propellers and thrusters. The shipyard further assisted by constructing and maintaining complex scaffolding in support of interior renovation projects. There was an extensive works programme for the cruise liners Pearl and Jade that included full blast and application of silicone coatings, the installation of new ballast water treatment system pipe lines, and overhaul of thrusters, stabilisers and Azipod units.

On the world stage, the shipyard leads the way in organising and supporting overhauls of ABB's Azipod and Fixipod propulsion units. Disney Cruise Lines brought its Fantasy liner to GBS for the ship's first class-related dry-docking. Works included an extensive hull treatment and anode replacement programme, and the building and maintenance of a 10,000m³ of complex scaffold stage to support major water park and slide refurbishments. Oceania's Insignia and Regent's Seven Seas Mariner also visited for a quick refit.

The shipyard offers a comprehensive list of services on its website along with technical information for shipowners, operators and superintendents prior to dry dock. 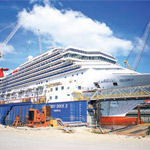