Survitec Group is a global leader in the manufacture, supply, inspection, testing, and maintenance of safety and survival equipment. Headquartered in Birkenhead, the group is home to some of the most reputable brands in the marine industry including RFD, Beaufort, DSB, DBC, SurvitecZodiac, RFD Toyo, Brude and Crewsaver.

With a heritage stretching back over 160 years, Survitec has a reputation for product innovation, technological advancement and quality assurance.

Survitec has pioneered the development of MES for 40 years. Its solutions are safe, reliable and easy to deploy with minimum crew intervention and can evacuate over 800 passengers in less than 30 minutes. This instills a high degree of crew confidence in an emergency. The RFD Marin Ark2 MES has fully enclosed dual helical slide paths with no restrictions to ensure no passenger is exposed to the elements at any time during evacuation. Dual spiral slide paths allow for safe, rapid and controlled decent. A compact design ensures the system installation takes up less space on deck and minimum action makes for simple crew operation.

Survitec Group now wants to combine the benefits of chute evacuation with the advantage of propulsion, a feature that is normally the preserve of a traditional davit-launched lifeboat. It is now actively developing an alternative escape system (AES) for large passenger ships. The new technology is being seen as the natural progression to Survitec's existing range of MES solutions.

Survitec has long been a market leader in commercial lifejacket design. Recent product launches include its new inherently buoyant Crewsaver Premier Compact lifejacket for the cruise and ferry market. This has been designed to comply with amendments to the LSA Code on the testing of lifejackets that comes into force on 1 January 2016. Its streamlined stack-and-stow profile is 42% smaller than the current Premier 2010 and takes up less storage space onboard (17.4L). This makes it easier for a vessel to carry additional lifejackets, readily accessible in public spaces, at muster stations and on deck.

The company also recently launched the Seacrewsader 290N 3D lifejacket, a new twin chamber SOLAS lifejacket aimed at the industrial and commercial marine market. Designed using state-of-the-art Fusion 3D rendering technology, the jacket offers a superior ergonomic fit that is shaped to the wearer's body. A unique feature is the 3D outer cover that can be easily replaced when no longer fit-for-purpose or a change in application is required.

Keeping ahead of new safety regulations

Survitec's direct involvement with the standards bodies, government organisations and various manufacturing associations ensures its personnel have an in-depth understanding of the legislation and standards regulating the cruise industry as well as the trends shaping its future. This feeds into a product development pipeline that is focused on reaching beyond compliance.

Survitec employs 2,000 people across ten manufacturing sites and 50 service centres. Its worldwide network includes an additional 550 distributors and agents. This provides the company with the resources and group-wide capabilities to manage worldwide asset integrity programmes and equipment hire packages. For example, Survitec's Global Hire programme, now in its tenth year of operation, has 7,000 leased life rafts in operation. This global supply and servicing capability extends to over 2,000 ports, including all the world's major ports.

A market leader beyond the marine industry 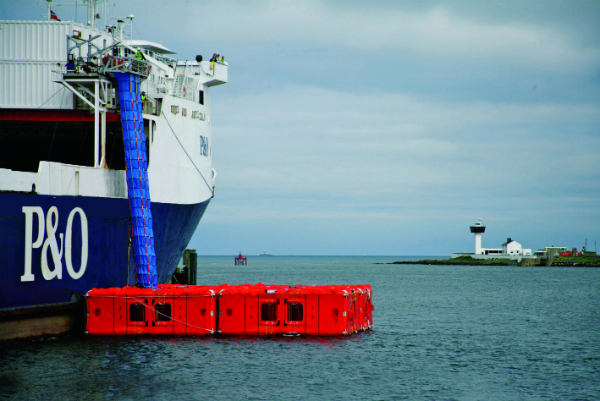 Survitec customers include many leading cruise lines such as P&O.