With three destinations working together to promote the Arabian Gulf to the world's cruise tourists, there's strength in numbers for Cruise Arabia partners Oman, Abu Dhabi and Dubai.

Already among the world's top-three cruise destinations for winter sun, the Arabian Gulf is a place where guaranteed sunshine, calm and warm waters, majestic desert landscapes and futuristic cityscapes meet.

The diversity of the Arabian Peninsula and its complementary destinations and travel experiences - and above all, its potential to grow cruise tourism - has led to a partnership between three of the region's leading tourism authorities.

Cruise Arabia, an initiative of Abu Dhabi Tourism and Culture Authority, Oman Ministry of Tourism and Dubai Cruise Tourism, was founded late last year with the singular aim of growing the cruise tourism sector in the Arabian Gulf.

At home and abroad

Although the present cruise tourist in the Gulf is more than likely to hail from the traditional markets of Europe and North America, the Cruise Arabia partners see their future travellers coming from diverse markets, in particular from the fast-growing middle-classes of China and the Indian subcontinent.

It's a reflection of the location of the Arabian Gulf, which has become the natural crossroads between Europe and Asia, East and West. More than a third of the world's population is within four hours' flight, and a staggering two thirds is within eight hours'.

Buoyed by the growth of the Gulf airlines - and, in particular, Emirates and its ever-expanding route network into the region's home port of Dubai - there is clearly scope for growth. The three agencies are also working closer to home to raise awareness of cruise tourism in a regional audience that is largely unfamiliar with the cruise experience.

Hamad Mohammed bin Mejren, executive director of business tourism at Dubai Tourism, notes: "Typically, around 70% of cruise tourists are from the domestic market. Here in Dubai, and indeed across the Gulf, we're looking at around 2%, with almost all cruise travellers flying in or out of the city.

"In partnership with Oman and Abu Dhabi, we therefore have a very clear strategy of promoting the unique landscapes, experiences, culture and cities within the Arabian Gulf internationally, while raising awareness of cruise tourism in our domestic markets.

"We believe it's a strategy that will serve the cruise industry and our respective tourism economies very well."

The partnership has already started to bear fruit. In March, Royal Caribbean International announced a return to the Gulf for the 2015/16 season with Splendour of the Seas. With her home port in Dubai, the region's leading destination for cruise tourism, she will also be sailing to Abu Dhabi, Muscat and Khasab, which Mejren says is "testament to the strength of our partnership and combined destination offering, which acted as a tangible incentive for Royal Caribbean's return".

Dubai port's proximity to the centre of the city and excellent transportation links means that the attractions of the city are within immediate reach of cruise passengers. Its must-experience attractions include Burj Khalifa, the Palm Jumeirah and the Burj Al Arab, as well as its stunning desert and coastline.

Dubai, Abu Dhabi and Oman together provide a compelling destination experience for cruise travellers. The region boasts city skylines, desert landscapes and beaches; the world's most sophisticated malls contrasted with traditional souks; natural wilderness and adventure experiences; art, culture and heritage; and world-leading hotels and a burgeoning gastronomy scene - all underpinned by the exceptional welcome and hospitality in the region, which stem from its traditional Bedouin culture. 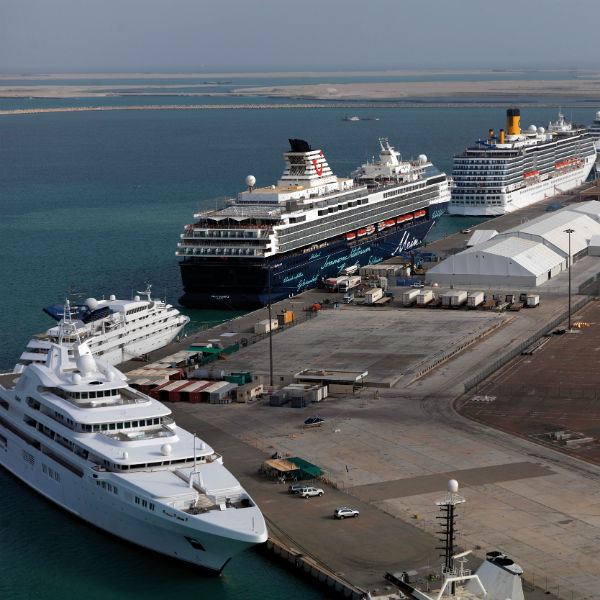 The port of Dubai’s excellent infrastructure and location makes it an ideal berth; the city centre is within easy and convenient reach for passengers.