Rik Hoerée: A lot of the entertainment communication systems today still operate as islands. Each venue has its own system. If there is a broadcast centre onboard, it often has a separate system from those for the entertainment venues, even though the same systems are active in all the venues.

Communication considerably improves when all entertainment venues and broadcast areas are brought together on one platform, allowing a smooth integration of communication. With wireless communication, this is even more of a plus, since it means that users can walk from venue to venue without changing their wireless belt packs.

Riedel brings this philosophy to the next level by seamlessly integrating radios and VoIP SIP into the entertainment and broadcast communication network. This means that devices like onboard phones, radios and wired or wireless belt packs can all talk to each other, dramatically improving onboard communication.

Do you think cruise operators are doing enough to cater for this new communication technology?

When we started talking to people in the cruise business, they realised how much their communication could be improved using Riedel. A lot of the issues described above were simply accepted as a given, because people believed that this was what could realistically be done. Our goal is to change that way of thinking.

What does the MediorNet do and how can it improve a ship's communication network?

MediorNet is our real-time fibre network for video, audio, data and communications. It is able to transport signals, not just point-to-point but as a true network - point-to-multipoint. MediorNet can not only transport signals but also dynamically route them. It features onboard processing such as embedders/de-embedders, frame synchronisers, up/down/cross conversion and quad splits.

The system can either be used as a fibre backbone connecting all the entertainment and broadcast venues of the entire cruise ship, or be set up remotely as mobile stage boxes allowing connection with cameras, mixing consoles, audio I/O, intercom panels and so forth.

How do you save time during the construction phase?

Construction time is continuously under pressure, be it in a newbuild project or a refitting. When installing MediorNet, you will essentially have only one type of multicore fibre-optic cable to be installed for all interlocal cabling, no matter what signals you want to transport between these venues. The fibre-optic cabling is terminated on fibre-patch panels on all locations, where you simply plug in your MediorNet terminal equipment. In addition, MediorNet's wide range of signal interfaces significantly reduces the number of external converters, while its dynamic routing capabilities make external patch panels obsolete. Again, this results in savings for hardware and installation.

Can you give us some background to the company?

The company was founded in 1987 and today employs over 400 people at 11 locations across Europe, Australia, Asia and the Americas. 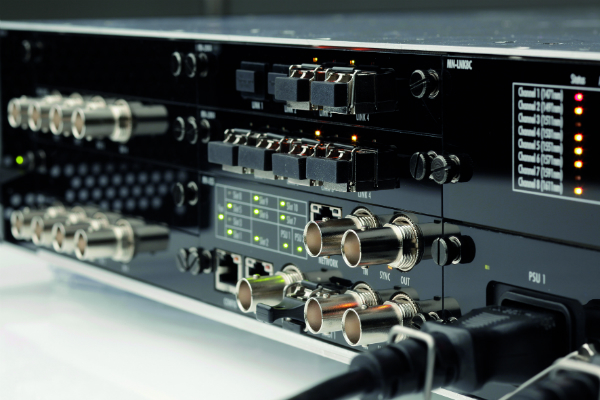