A single cruise liner can have up to 5,000 people on board, and making it fuel, water and waste efficient is a complex and challenging process. "These ships are large floating cities," says Henrik Badin, CEO of Scanship. "Cruise liners need to reduce their refuse and energy profligacy - from a cost perspective and an environmental one. We see this as a unique opportunity for companies like Scanship to work with the industry, not only through selling systems, but offering services too."

Scanship has been working with shipowners on waste management solutions for on-board systems since 1993, so it's a subject that Badin has a lot of expertise in. He describes the present international requirements for discharge overboard as 'minimal'. Nevertheless, attempts to address the issue of maritime pollution have been made, gradually raising public expectations of the sector in the aftermath of regulations like Alaska's 2003 Murkowski Bill. This US law prohibited the dumping of untreated sewage in the state's waters, setting new minimum standards for the discharge of treated sewage and grey water. According to Badin, complying with these provisions has gradually become a standard operating policy for cruise companies, even ones operating outside of the region.

Scanship's hard-won expertise has gradually allowed it to develop an excellent understanding of the various ways to improve a cruise liner's environmental impact.

"I think that the Murkowski standard is now an industry one. From 2003 onwards, most of the new ships being contracted were designed and built with an Alaska-type system in mind," he says. For Scanship, it all led to a big breakthrough in 2002, when it won a contract to retrofit several Norwegian Cruise Line (NCL) ships to meet the new US rules. This went so well that the company was later asked to do the same work on all the remaining vessels belonging to NCL.

In fact, Alaska's Murkowski standard, and the impact of recent special measures to protect the Baltic Sea, have catapulted Scanship into a market-leading position. From 2013 onwards, 50% of all new cruise ships coming out have been equipped with advanced Scanship technologies to meet the new international regulations, according to Badin.

Scanship's hard-won expertise has gradually allowed it to develop an excellent understanding of the various ways to improve a cruise liner's environmental impact. Badin says that for his company, it has been a case of continuous improvement over the years to make ships' systems more efficient, and to reduce their overall energy consumption. This persistence has won the company some high-profile contracts within the cruise industry.

"Virgin Voyages have been looking at what we have been doing, and have seen our efforts to develop carbon capture and waste management technology," Badin says. "It was extremely focused on how to maximise addressing their environmental impact, and was attracted to us because of our UPS - that we were the leaders of clean technology for the cruise industry."

Virgin Voyages first approached Scanship to design the systems for three of the shipowner's new builds in 2016, when the Scanship brand was well established. Within a year, the company was working under contract to provide all three Virgin vessels with a special package for total waste management and advanced wastewater treatment, using the newest technology available.

"Then Virgin Voyages came back to us and said 'We want to sign up to an agreement to help you develop this technology, and then when it is ready to deploy on board, we will take it,'" Badin continues. "Last October, it had a keel laying ceremony in Genoa and invited Scanship, other companies and the local media down to the shipyard. There, it publicly announced that Virgin was going to build a cleaner ship, and that it was going to do that with Scanship and others. It was a very disruptive approach by a shipowner and fantastic promotion for us." 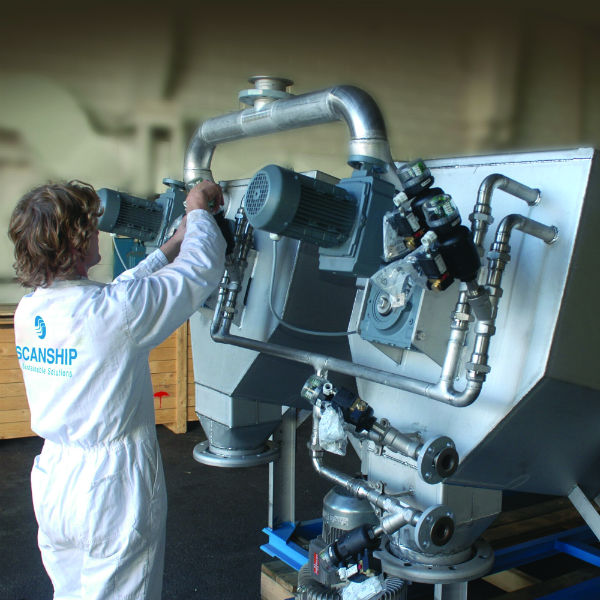 Scanship is committed to minimising the energy consumption of waste-management solutions.