Cruising down under: on the up 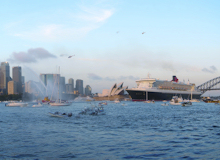 Known the world over for its stunning scenery, unique culture and the cities clustered around its coast, Australia has long been an important destination for around-the-world cruises, but its domestic sector has remained largely underdeveloped. The home-grown P&O Australia has a successful history, but now international cruise operators have turned their eye to what has become one of the industry's hottest markets.

According to the 2011 'Australian Cruise Industry Report' from the International Cruise Council Australasia (ICCA), passenger numbers in Australia have reached a record high, up 34% in 2011 with 623,294 Australians taking a cruise holiday and spending an estimated total of 6.5 million days at sea, an increase of 36% on 2010. This surge in passengers surpassed all other major international markets, with the US and UK seeing rises of 4% and 5%, respectively.

Allure of the Antipodes

With such spectacular growth, it is no wonder the country is attracting major cruise lines and blue-chip vessels, including the annual visit of Cunard Line's Queen Mary 2, as well as Carnival Spirit and Celebrity Solstice. More ships are visiting Australia and are homeporting there; for example, from October 2012, Carnival Spirit will be based in Australia year-round, offering eight to 13-day cruises to the Pacific Islands and New Zealand, while Royal Caribbean's Radiance of the Seas is the newest and largest ship based in the region.

"Passenger numbers in Australia have reached a record high, up 34% in 2011 with 623,294 Australians taking a cruise holiday."

The question is, why now? To some degree, the answer is the economy. While many established markets have been struggling with the precarious state of the global macroeconomic environment, Australia has remained relatively robust.

"There has been no banking crisis in Australia, so the economy is relatively strong," explains Peter Shanks, president and managing director of Cunard Line. "It is a multicultural destination and English-speaking, which is the right language for the international cruise industry. Furthermore, the best parts are on the coast, which makes it an ideal destination."

Queen Mary 2 has included Australia in its worldwide cruises for many years, but is now scheduled to stop for longer in recognition not only of the growing interest among international passengers to visit the country, but also the appeal of cruising to the domestic market. Although Cunard only visits once a year - in February/March - it sees the country as an increasingly important element of its worldwide voyages.

"Australians are great cruisers, and the country has fabulous destinations," says Shanks. "The market is about Australians and, for us, about bringing people to this country, where the cruise business is strong. We are not in the homeport market ourselves, but Queen Mary 2 is an iconic ship and goes to Brisbane, Sydney, Perth and now to even more destinations as part of a 21-day around-Australia voyage.

"From 2013, it will also circumnavigate New Zealand. We take people to Australia, and then we sail Australians around their own country. Going around Australia and New Zealand is a great journey, and we expect 50% of the passengers on that part of the voyage to be Australians."

This view of a blend of local and international passengers is shared by other cruise lines.

"Guests on Australian cruises are a mix of Australian and international visitors," says Gavin Smith, managing director of Royal Caribbean and Celebrity Cruises Australia. "The appeal of the destinations will continue to bring visitors from around the world. Meanwhile, local guests who cruise on Celebrity ships in Australia will no doubt continue to travel with the brand internationally. We believe in the lifetime value of these high-repeat guests."

Despite the fact that some of the more mature cruise markets have seen slower growth because of the state of the world's economy, the cruise market in general has remained relatively healthy on a global level, with bigger ships and new locations crucial to sustaining that momentum.

"The demand for more exotic cruise destinations strengthens the number of international guests who travel from around the world to enjoy Australian cruises," says Smith. "However, a high percentage of guests are local - either from Australia or New Zealand."

"Going around Australia and New Zealand is a great journey, and we expect 50% of the passengers on that part of the voyage to be Australians."

This is supported by ICCA statistics, which show that Australians accounted for 70% of passengers cruising in Australia, New Zealand and the South Pacific, while the number of Australians cruising to New Zealand has surged by 80%.

"Australians love to travel and are extremely enthusiastic about cruising," says Smith. "The factors for this include the deployment of world-class ships to the region for the summer cruising season, the affordability of cruising and the strength of the Australian dollar.

"Additionally, the many and varied ports of Australia and New Zealand continue to attract guests from around the world. These inbound guest volumes contribute to the commercial success of local cruise programmes and make the deployment of modern luxury ships like Celebrity Solstice possible. Australians in large numbers now have an opportunity to experience the quality amenities and activities found on world-class ships deployed to our region, without the need to travel too far from home for the experience."

Celebrity Solstice arrives in Australia following an extremely successful year for Celebrity Century. Solstice is only three years old, and will be one of the most prestigious vessels to be based in the region during the 2012/13 season. The move is led by the line's perception that passengers from around the world are seeking attractive and exotic destinations onboard high-quality cruise ships.

"Australia, New Zealand and the South Pacific offer a wide range of destinations and activities," says Smith. "These include bustling cities with fine dining and fashion, exotic and deserted beaches, and wildlife and nature-based excursions. For Celebrity guests seeking a deeper immersion into local culture, there is, of course, an opportunity to extend their stay either before or after the cruise.

"The number of Australians cruising to New Zealand has surged by 80%."

"With markets overseas becoming increasingly competitive, cruise companies have looked to new regions to expand. We are fortunate that Australians have embraced cruising, and with the deployment of bigger and more amenity-filled ships to the region this year, we believe the growth in this local cruise market will only increase."

Australia's desire to see the market continue its rapid growth is underpinned by an understanding of the economic and social benefits that a cruise ship visit brings to a destination.

With a strong local economy, fascinating and varied destinations, and a dominant position as the gateway to the South Pacific and Asia, Australia is rapidly becoming one of the cruise industry's hottest tickets.