The graveyards of giants 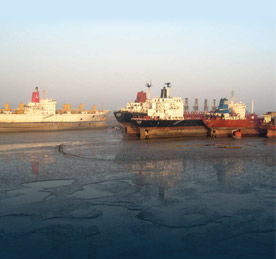 The town of Alang is located along the west coast of India, 50km from Bhavnagar in Gujarat, a sandy stretch of land shaped like a downtrodden shoe. The town is hard to see, almost perpetually obscured from view by a barrage of rusting oil tankers, cargo ships and cruise liners in various stages of disrepair. This humid, oily, malarial graveyard wouldn’t look out of place in a dystopian nightmare. Even so, it has helped turn Alang from what was once a sleepy, poverty-stricken village into the ruthlessly efficient outdoor factory at the centre of India’s £270 million shipbreaking business.

Alang produces 2.5 million tonnes of steel a year for India’s rolling mills, delivered by an army of roughly 40,000 migrant workers who strip down these once-colossal vessels in any one of the 190 ‘plots’ that line the coast. According to data from the NGO Shipbreaking Platform, 744 large commercial ships were sold to scrap yards in 2018, with 253 of these being transferred to Alang. Once beached, everything that can be taken from these ships is stripped in the scrapyards, with larger items such as diesel generators and life jackets sold at local markets. Even the bells from the ships can be heard ringing from Hindu temples across the region.

Peter Knego, a journalist and maritime historian, has been to Alang nine times. He describes it as a “journalist’s worst nightmare and best dream”.

“It’s absolutely fascinating,” he says. “You have this line-up of ships exposed high and dry on this beach where there’s a 25ft tidal variant, so when it’s low tide, you can see the entire form of the ships just sitting in this environment of mud and tiny little workers.”

744
The number of ships scrapped worldwide in 2018. Shipbreaking Platform

The ships, brought from places as far afield as Brazil, are beached during high tide, and hundreds of manual labourers descend as the tide recedes. “You just can’t believe what’s going on around you,” Knego says. “The sound is constant. You hear the cutting of the torches, the yanking of the steel – they take ropes and attach them to the parts of the ship that have been cut and pull at it by hand. The workers around the shore yank pieces of the ship down and when they crash into the beach it makes a huge thud. It’s like a sonic boom.”

For Knego, going to Alang is less a visit than a pilgrimage, a culmination of three decades of passionate research into world-famous cruise liners. Nevertheless, it’s an experience that often evokes mixed feelings. “It's almost a spiritual journey to see these ships,” he says. “A lot of them I've known for 30 years since I was a kid. I’ve been chasing them and reading about them, and actually seeing them in this state of deconstruction is fascinating and very sad, because they are beautiful creations. They’re not like the modern cruise ships, which look like floating blocks of flats; these were hand designed by the greatest architects the world knew at the time.”

“You have this line-up of ships exposed high and dry on this beach where there’s a 25ft tidal variant, so when it’s low tide, you can see the entire form of the ships just sitting in this environment of mud and tiny little workers.”
Peter Knego, maritime historian

Shape up or ship out

While being ignominiously sold for scrap is a sad end for any cruise ship, it’s a gloomy fate that not all ailing cruise liners have to face. Most ships have an estimated lifespan of 30 years, the amount of time it takes for an asset to depreciate to 15% of  its original book value. Even so, this doesn’t mean older ships don’t enjoy a late surge in the twilight of their careers.

For older ships that haven’t become rusting wrecks or dusty museums, staying in the game often requires a process of reallocation, relocation or renovation. Often ships are sent to a different line within the same company or sold to a lower-tier cruise line. Sometimes they are relocated to parts of the globe where ports are too archaic to house modern mega-ships.

Royal Caribbean’s 28-year-old Empress of the Seas sailed with Spanish subsidiary Pullmantur for eight years before being brought back in 2016, just as the Cuban market was opening up. As Knego explains, this renaissance is largely due to Cuba’s lack of modern and spacious maritime infrastructure. “They brought the Empress back because they needed a smaller ship to go to Cuba, because Havana’s harbour isn’t big enough for the more modern ships. So that was a stopgap for this particular ship, which will probably leave the Royal Caribbean fleet as soon  as they can get larger ships in there.”

Then there is the facelift option. In its annual ‘Cruise Lines Outlook’, UBS estimates that by 2020, at least 12% of the global capacity will be at least 25 years old, and nearly 5% will be pushing 30. Significant cosmetic surgery will be required to keep these ailing ships afloat.

As overheads continue to rise on new constructions, affluent cruise lines are overseeing large-scale renovation projects on older vessels. Carnival currently houses 26 ships, nine of which were originally built during 1990–98. Hundreds of millions of dollars have been lavished on these vessels that now feature poolside Guy Fieri burger stands, sushi restaurants and pharmacy-themed mixology bars.

Life in the old girls yet

For Lisa McCabe, Carnival’s senior director of hotel refurbishment, these projects are still worth it. “Some of our older vessels are currently 25 years old, and we’re still investing money in them,” she says. “The ships are still sailing, there’s still a significant market there. Carnival Cruise Lines has a good customer base for first-time cruisers, a lot of them are shorter cruise lengths so there’s a need for them. Guests like our ships for a variety of reasons – often they get introduced to the cruise industry on them; while some enjoy the familiarity of the ship. Some of them prefer them because they’re smaller, while some enjoy the itineraries. It’s a mixture of things really.”

As McCabe says, orchestrating these renovation projects is a complicated business that often involves drastic surgical measures to bring these poorly patients back to full form. “You need to bring them up to standard,” she says. “Whether it is different safety aspects, different USPH aspects, or you might run into systems that need upgrading – whether it’s the piping or the electrics or the air-conditioning system.

“Some of our older vessels are currently 25 years old, and we’re still investing money in them. The ships are still sailing, there’s still a significant market there.”
Lisa McCabe, Carnival

“So you kind of take the opportunity, when you do a large refurbishment, to do more on the technical side to bring the ship up to a newer standard as well as focusing on the decor.”

One example McCabe cites is Carnival Elation, a member of the fleet that received a full-blown makeover in the form of 38 new cabins, and 98 balconies added to pre-existing cabins. This drastic process involved pre-manufacturing sections of steel and reattaching them once the exterior had been stripped back.

“The balcony sections are already made,” she says. “So when the ship pulls in you basically cut out the side of the ship, pull that steel away in big sections and plug in the new section, then weld that and you have kits of balcony units. So for something like that you need to study the weight, structure, manoeuvrability for the captain and anything that can interfere with any of the site lines for the vessel. There are many factors when you do these types of projects that you need to look into.”

While older cruise liners continue to go under the knife and enjoy a new lease of life thereafter, many are uncertain about how they will cope with the ominous spectre of the 2020 environmental regulations. It is still unclear whether companies will invest in the expensive procedures required to bring them up to scratch.

253
The amount of ships scrapped in India last year – the highest in the world.
Shipbreaking Platform

Despite this speculation, Peter Knego believes that the 2020 regulations will not affect older ships as much as some believe. “In general, the trend is when new regulations come in they make the older ships less viable and not worth spending all that money on to keep them going,” he says. “But if the economy holds up, and people are spending money to go on cruises, then they could be fine. Right now, they’re building so many ships that the shipyards are booked for the next three to four years and the old ships are still operating. With Carnival, they’re still keeping the older members of their fleet going, because they’re still filling up the ships. So there’s still hope.”