The devil and the deep blue sea 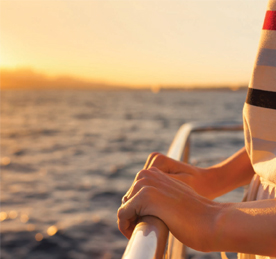 In October 2015, a 15-year-old girl was enjoying the last day of her holiday on board the Carnival Breeze. After visiting the ship’s ‘Teens Only’ lounge, Club O2, she left to get ice cream, only to be violently sexually assaulted by five men. The men allegedly pushed her into an elevator and dragged her into one of their staterooms, where there were no security cameras to record the crime.

The girl’s mother, who filed a lawsuit against Carnival, claimed that the ship lacked “adequate security to protect minor passengers from paedophiles and other sorts of sexual attackers”.

Responding to the claims about security measures, a Carnival spokesperson said, “We strongly disagree with the factual allegations in the complaint and intend to vigorously defend ourselves.”

The young girl’s case, represented by Florida-based maritime lawyers Brais Law, is obviously an unusual incident. And yet it is not an isolated one. According to official figures from the US Department of Transportation, cruise operators reported 76 cases of alleged sexual assault to the FBI in 2017.

The 2018 incidence rate is probably similar; while year-end figures have not yet been released, there were 60 cases reported between January and September. Compare these figures with the total reported number of homicides in 2017 (one), kidnappings (two), assaults with serious bodily injury (13), or theft of more than $10,000 (seven), and the conclusion is hard to miss: sexual assault is by far the most prevalent serious crime at sea.

Of course, the total may not sound too high when you consider the number of passengers who took to the seas (more than 13 million Americans in 2017). By most metrics, cruising appears to be a relatively safe vacation – certainly no more dangerous than, say, walking through a foreign city at night.

It is our opinion that cruise lines will do whatever they can to downplay the number of crimes committed on their ships because those numbers affect their reputation and potential customer base.
Jacqueline Garcell, Lipcon, Margulies, Alsina & Winkelman PA

“Between 2015 and 2017, the sexual assault rate on cruise ships remained substantially lower – more than two thirds lower – than the land rate,” says Dr James Fox, a professor of criminology at Northeastern University, who has consulted for CLIA. “Also, note that the definition of sexual assault used for cruises is much broader than that – forcible rape – used for land. Thus, if anything, the extent to which cruise ships fare better is understated.”

Fox believes that the industry is often unfairly demonised. He says that even following the 2016 change in crime reporting standards, which saw sexual assault cases jump from 13 in 2015 to 62 in 2016, the figures reflect well on the industry.

“Cruise ships remain considerably safer than many other vacation options in terms of sexual assault, as well as other violent crimes,” he remarks.

“Cruise crime figures increased from 2015–16 because of the move to include all reported incidents rather than just those for which the investigation had been completed,” adds Sarah Kennedy, a spokesperson for CLIA. “Even with this shift in approach, the rates of victimisation on board cruise ships remain a small fraction of the counterpart statistic for land.”

All this said, it is probably unwise to focus too intently on crime statistics. If there’s one thing the #MeToo movement has made clear, it’s the sheer number of people who have experienced sexual crimes but never reported them to the police, be it through shame, intimidation, fear of not being believed or other reasons. This means sexual crimes on cruise ships, in line with sexual crimes anywhere, are probably significantly under-reported.

“Crime victims often do not report the incident to the cruise line because they do not feel a sense of security or comfort on the cruise ship,” says Jacqueline Garcell, a maritime attorney at Lipcon, Margulies, Alsina & Winkelman PA, which has represented a number of sexual assault cases on cruise ships. “In addition, because cruise lines are only required to report certain types of crimes, they often reclassify crimes in a manner that will not even require reporting.”

Evidently, sexual assault is a far-reaching and nuanced problem. No industry, however seriously it takes these issues, can afford to rest on its laurels.

“Although cruise lines have improved their rates of reporting sexual assault crimes, there is still a long way to go until the information is widely available and accurate,” says Garcell. “The lack of adequate security on cruise ships is the first change that needs to take place for these incidents to be prevented and, hopefully, for victims to feel comfortable enough to come forward if they are sexually assaulted.”

In contrast to Fox, Garcell believes that cruise ships face certain issues that make them particularly conducive to sex crimes. For one thing, the factors that make for a good vacation – a relaxed atmosphere, free-flowing alcohol and an air of disinhibition – can also create an environment in which boundaries are overstepped. In a number of sexual assault cases on cruise ships, the alleged assailants were drunk and making a nuisance of themselves, underscoring the need for tight security.

“Cruise lines readily acknowledge that a major factor in preventing or reducing incidents on their ships is maintaining a highly visible security presence, with shipboard security constantly patrolling the ship,” says Garcell. “But they don’t implement that strategy. Instead, cruise lines only have a handful of crew members serving as security aboard the entire vessel, and even less than a handful actually on duty at any given time.”

She also thinks that, through virtue of being employed by the cruise industry, security personnel face a conflict of interest.

“In our opinion and experience, they are more concerned with protecting their position and the company they work for than they are with protecting the victim and fully investigating the incident,” she says. “It is our opinion that cruise lines will do whatever they can to downplay the number of crimes committed on their ships because those numbers affect their reputation and potential customer base.”

These are not accusations to take lightly, nor are they points that many cruise lines would be prepared to accept. While it is hard to verify whether security lapses are common – not least because security protocols are rarely made public – all the major cruise lines are adamant that passenger safety is their top concern.

“Cruise lines have every incentive to ensure that any allegation of serious crime is properly reported, and that the alleged victim receives all the care and assistance he or she needs,” says Kennedy. “In the rare instance of a serious crime allegation, existing law requires the immediate reporting of such allegations to the FBI, and imposes very strict civil fines and criminal sanctions for failing to promptly report.”

Clearly, something has gone badly wrong if cruise lines and sexual assault victims are placed in an adversarial relationship. While the occasional lawsuit does happen, there are provisions in place to ensure they are generally on the same side.

Cruise lines have every incentive to ensure that any allegation of serious crime is properly reported, and that the alleged victim receives all the care and assistance he or she needs.”
Sarah Kennedy, CLIA

A right to feel protected

Under the Cruise Vessel Security and Safety Act of 2010, passengers have a legal right to certain protections. They are entitled to medical attention, including a sexual assault forensic exam, along with a written security guide that provides them with essential information.

The charity RAINN (Rape, Abuse & Incest National Network) helped to advocate for this act. It has also developed a set of best-practice standards for organisations, helping them improve the way they respond to sexual assaults. In 2015, Royal Caribbean became the first cruise line to receive certification from the charity.

“The subject of sexual assault prevention presents a challenge for all kinds of organisations, and RAINN’s new standards offer a clear path forward for dealing with the topic,” said Richard Fain, chairman and CEO of Royal Caribbean, upon earning the certification. “We take pride in reaching the standards they set for certification.”

As a condition of CLIA membership, cruise lines must also comply with various policies. These include crime reporting standards and rules for safeguarding children in youth centres.

As Garcell points out, the legal side of the equation can sometimes be more complicated at sea than it is on land. Since many ostensibly US ships sail under foreign flags, jurisdiction can be a mix of federal, local and foreign. However, this should be no impediment to justice.

“It is important that victims retain a law firm practising maritime law specifically, because other lawyers may not be familiar with the relevant maritime rules, or even know they exist,” says Garcell.

Of course, the overwhelming majority of cruise passengers do enjoy the relaxing, safe vacation they set out for. However, even a few incidents of sexual assault are a few too many, and cruise lines need to remain vigilant. Following the #MeToo moment of reckoning, no industry can afford to shy away from the difficult questions.

As Garcell says, “We are confident that more victims will come forward in this post-#MeToo era, especially knowing that the perpetrator can be held responsible, along with those enabling the perpetrator’s actions.”

In search of a fairer industry

A new research project designed to reduce incidences of sexual harassment has been unveiled by the Kalmar Maritime Academy in Sweden. Entitled ‘Practical work environment management for an equal shipping industry’, the scheme will identify and evaluate existing strategies in the shipping industry that discourage discrimination.

“We want to achieve change, in the short term as well as in the long term,” says Cecilia Österman, a senior lecturer in maritime science and one of the project’s principals. “We want to contribute to a safe, effi cient and equal shipping industry, where everyone’s competence and skills are made the most of.”