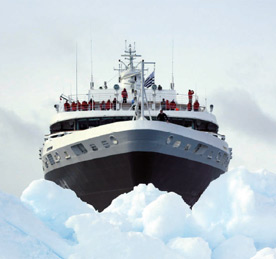 In early July 2018, Ponant unveiled the first ship in its new Explorer class. At 131m long and weighing 9,900gt, Le Lapérouse is a sleekly crafted ship, capable of housing 184 passengers, with a cinema and an infinity pool. In short, a bold statement from the French cruise company, which has traditionally been regarded as an innovative, albeit small-scale, operator.

While competitors such as Lindblad and Quark are arguably more established names – particularly in the US market – Ponant is leading the expansion race, with four new Explorers set to be built by 2019, along with Le Commandant Charcot, the world’s first electric-hybrid polar exploration ship. By 2021, the company will have an impressive 12 ships in its fleet. This expansion is part of a broader trend that has seen several companies announce plans to construct luxury expeditionary ships. Despite making up 1% of the global market, Cruise Industry News reported that 28 specialist expedition ships will be launched by 2022.

Navin Sawhney, Ponant CEO for the Americas, says this demand for luxury expeditions is being fuelled by the emergence of a different kind of consumer; a more informed, eco-conscious customer with, as he puts it, “a strong desire to visit unspoiled regions that could one day disappear”.

“We recognised early on that expeditions didn’t have to be a basic experience,” he says. “People weren’t just looking to travel simply for conspicuous consumption – they were looking for greater meaning. They wanted to gain more knowledge and discover places through the experience of travel. That’s what we started responding to with the launch of Le Boreal flagship, and with the six new Explorer ships that started operating in 2018.”

The launching of Le Boreal in 2010 was a watershed moment for Ponant. Designed by Jean-Philippe Nuel and built at Italy’s Fincantieri shipyard, it was the operator’s first purpose-built ship for luxury expeditions. A small, elegant vessel, Le Boreal is the product of a desire to marry the intrepid with the opulent, nimble and sturdy enough to navigate treacherous waters, but with on-board spa facilities and boutique-style interiors.

The ship was designed to accommodate Ponant’s expanding list of expeditions, which currently covers the Adriatic, Caribbean, Mediterranean, Pacific, and the North and South Poles. Designing luxurious ships that can operate in such diverse conditions is incredibly difficult, according to Sawhney. “We have to make sure the ships are designed to cater for the luxury market, while being capable of traversing the areas you’re going to,” he explains. “You want to make sure you get the design of the ship right so that it delivers great comfort and safety to the guests who are experiencing it.”

One feature he cites with this balance in mind is the reinforced ice-class hull across all explorer ships, allowing them to safely navigate polar regions. “The hulls have to be extra strong, and while these things are pretty standard in the world of shipbuilding, you have to work really hard to get those things right,” says Sawhney.

Initially constructed at the Vard Tulcea yard in Romania, before the finishing touches were added in Vard’s Ålesund shipyard in Norway, Le Lapérouse and Le Champlain are 131m in length and capable of housing 184 passengers each. Both have the sleek, super-yacht look of Ponant’s existing fleet, with elegantly designed staterooms, large windows and spacious lounge areas. An infinity pool, cinema room and ocean-view sauna all feature, while the back of the ship houses a three-tier marina platform serving as a launchpad for water sports and zodiacs. “It’s a very intimate vessel,” Sawhney says. “It’s designed to bring in light from the outside and make our passengers feel as if they’re at one with the destination. The most breathtaking aspect of it is the Blue Eye lounge.”

We recognised early on that expeditions didn’t have to be a basic experience. People weren’t just looking to travel simply for conspicuous consumption – they were looking for greater meaning.

This world-first, state-of-the-art suite sits below the waterline with two portholes resembling a cetacean’s eyes. Integrated digital screens project images from three underwater cameras as hydrophones transmit sea noises to passengers. The hydrophones, designed by contemporary music composer Michel Redolfi, are sensitive enough to pick up the subtlest noises on the ocean floor, while ‘body listening’ sofas vibrate softly to the sounds. A crucial part of the design was the glass itself, which had to be integrated into the hull and strong enough to meet Bureau Veritas standards.

“Building it required a team not just of marine engineers and designers, but sound and lighting engineers,” Sawhney says. “It took two years of design and engineering before we were satisfied that we had got it right. It’s an underwater lounge with an enormous glass window, and that glass needs to meet safety standards, as does the steel surrounding it on the exterior of the hull. Then it also needed to have specific features to enhance the guest experience, such as the hydrophones. It truly is an incredible feat of engineering and design.”

While the Blue Eye gives guests a pristine view of the deep blue, it is carefully lit with diffused lighting so as not to disturb marine life. As Sawhney clarifies, there is a detailed level of eco-conscious design that goes into every Ponant ship, which, given the more eco-conscious consumer it attracts, has become a key selling point.

“For us, sustainability and responsible travel are not new because we enjoy a symbiotic relationship with the sea,” he says. “We depend on the sea and are highly respectful of it. For us, it has always been vital to place the destination at the heart of what we do, and all of our ships are designed to be able to deliver that experience. We want the guests to become part of that destination.”

Energy efficiency was a major consideration for this vessel, with a Rolls Royce variable pitch propeller and ABB electric propulsion technology improving overall efficiency. The set-up involves two shaft lines driven by electric motors with controllable pitch propellers at the end, a measure that “should save 3% fuel annually”, according to Sawhney.

As with Le Boreal and its sister ships, four Wartsila 8L20 engines with eight cylinders have been installed on Le Lapérouse. This time, however, they have been fitted with a selective catalytic-reduction system to reduce nitrogen dioxide in the exhaust gas.

0.1%
The maximum sulphur content of Ponant’s fuel as of 1 Januray 2019 – the first fleet in the industry to adopt the
IMO’s impending regulations.
Ponant

This is part of a wider strategy to anticipate the IMO’s 2020 environmental regulations, as the cruise line switched to fuel with a maximum sulphur content of 0.1% on 1 January. “We are the first fleet in the cruise industry to use low-sulphur fuel one year ahead of regulations,” Sawhney claims. He also points to Le Commandant Charcot, Ponant’s new icebreaker vessel, which will become the world’s first electric-hybrid polar exploration ship when it is released in 2021.

“She is a very special vessel,” Sawhney says. “A new kind of luxurious icebreaker that will embrace sustainability and responsible travel, using liquefied natural gas and electrical-based fuel as opposed to most of today’s polar ships, which are nuclear-powered.”

Le Commandant Charcot will be the first icebreaker to use dual-fuel liquefied natural gas, with low-sulphur fuel oil used in transit and liquefied natural gas used at the poles. The vessel will bunker ship-to-ship in Norway, and two GTT tanks of 4,500m3 will allow it to make a three-week round trip. The vessel uses battery power while stationary, allowing the main engines to be turned off and the vessel to be silent.

“Anyone who cares about the environment knows that the arctic regions are precious, and sustaining their existence is of paramount importance,” he says. “We want to bring people to these regions so they can appreciate their beauty, but we want to do that in an environmentally sensitive way.”

Asked about the future, Sawhney goes back to the past. “Our company was founded by sailors in 1988,” he says. “The founding CEO is still the head CEO. And the essence of the brand is to explore and discover in the spirit of adventure, and we will continuously strive to do that, not just with the 12 ships that we have.”