Cruise weddings: all aboard the love boat

Weddings are becoming big business for the cruise industry, as operators enter an increasingly saturated market. But with legal constraints in place, some ships are having to take difficult measures before they can get brides and grooms onboard. Abi Millar examines the challenges of providing ceremonies at sea.

When Cunard announced that it was to drop its British flag after 171 years, the widespread reaction was bemusement. Founded in 1840, the line bore all the hallmarks of the venerable British institution it was: transatlantic voyages, ships named after queens and branding that traded unabashedly on UK traditions. Thus news that all three ships were to re-register in Bermuda marked a turning point in its history. Once the final vessel made the changeover in December 2011, for the first time Cunard had no UK-flagged ships.

Visually speaking, the change was hard to spot. Since Bermuda is part of UK Overseas Territories, its vessels could still legitimately fly the Red Ensign flag. But with the wording on the stern now reading 'Hamilton', not 'Southampton', the question remained: in what sense could this breach of its Britishness possibly benefit the bottom line?

Amid a hubbub of speculation, Cunard provided a surprising answer. The intention was not to overhaul the image, but rather to introduce a service prohibited under UK law. With its Bermudan registration, all three ships could finally offer captain-officiated wedding ceremonies onboard.

"Most of our competitors were already doing wedding operations, developing increasingly popular and lucrative weddings at sea," explains Andrea Lenihan, spokesperson for Cunard. "They've become a big business for the cruise industry generally."

The cruise ship nuptials market is certainly thriving. Even before Cunard placed its stake, parent company Carnival estimated that 2,200 couples a year would marry onboard its vessels. Princess, meanwhile, saw 5,747 weddings between 2004 and 2011, and the Cruise Lines International Association logged a 60% rise between 2000 and 2010.

From the perspective of a soon-to-wed couple, the attraction is obvious. Cruise ships have long positioned themselves as hotbeds of romance, with 10% of US honeymooners sailing into the sunset via cruise. For couples planning a voyage, it doesn't take much of a leap to hold the ceremony onboard.

"Carnival estimated that 2,200 couples a year would marry onboard its vessels."

"Generally speaking, our couples or their parents are experienced cruisers, but some of their guests have never been exposed to cruises, which makes it a nice way to bring new and future cruisers to our brand," says Nicole Blanco, manager of onboard revenue and concessionaires at Celebrity.

For such a saleable concept, the real surprise is that it took so long to emerge. Not until 1998 did mid-ocean weddings become a reality, when Captain Giuseppe Romano of Grand Princess conducted a ceremony in the first purpose-built chapel on the waves. As with Cunard, the reasons for the delay had to do with regulatory constraints. While Princess also flagged its ships in Hamilton, at the time Bermudan law did not recognise marriages in international waters. Only after sustained persuasion from Princess did the government relent, thus enshrining cruising lore in law.

Grand Princess hosted 58 weddings in its inaugural year, and before long, other players followed. Each had its own strategy for bypassing the legal hurdles, with many confining themselves to shoreside weddings on the day of embarkation or holding them at a destination stop. Few lines were capable of officiating a wedding at sea, with Bermuda and Malta the only two countries with licenses that apply across the board. Celebrity's ships, including the Azamara line, are registered in Malta.

"We have held weddings onboard since 2004, and introduced the programme to meet the interest expressed among our guests," says Blanco. "Destination and cruise weddings, in general, have grown exponentially over the past ten years."

Weddings, on land or sea

These days, most large mass-market cruise ships provide some form of wedding package. Princess, Celebrity, P&O and now Cunard can all do the honours mid-ocean. Disney and Holland America conduct ceremonies at their private islands, while Norwegian Cruise Line marries couples at selected ports.

"Destination weddings continue to grow, and since it's such a unique market, we foresee a continuation of the upward trend," says Blanco. "We plan to stay competitive by giving the same outstanding service that Celebrity's guests have come to expect."

"Onboard weddings can be markedly cheaper than their exorbitant land-bound equivalents."

Considering today's financial climate, this growth is not too hard to understand. With packages averaging out at £2,000, on top of the price of the cruise, onboard weddings can be markedly cheaper than their exorbitant land-bound equivalents. Moreover, there can be little doubt that convenience for the couple is at a premium. All the major packages include dedicated wedding planners, whose job it is to guide couples through the process - operationally speaking, the specific requirements of bridal parties can necessitate a lot of extra hand-holding.

"With every wedding, we have a staff of coordinators onboard who assist with all wedding aspects," says Blanco. "So, we're able to provide our wedding clients with an excellent service, without disrupting the shipboard staff or taking them away from their daily responsibilities."

Such obstacles are easily surmountable in an industry already reliant on a well-honed service. The real challenge has less to do with placating guests, and more to do with setting the company apart from rivals. With the market becoming increasingly saturated, how can a cruise line carve its own niche?

It's certainly a multipronged mission. Part of the answer is offering all the trimmings, with operator after operator attempting to out-amenity the rest. Most provide the full works, including cake, candles, pianist and priority check-in: Celebrity, for example, offers Champagne, chocolate-covered strawberries and rose petals on the wedded couple's pillows.

Equally important is supplying a high degree of customisability, a task made easier once a programme is well established. Princess, with its head start in the market, has the widest range of services available, with three packages and webcam technology for broadcasting the ceremony to friends at home.

For a player like Cunard, however young and untested in the market, this gamut of choices can come later. "We wanted to let the whole programme bed in, and ensure it was running smoothly, before we introduce further options," explains Lenihan.

For now, the extra appeal comes from Cunard's branding: its fame, history, diversity of destinations, the opportunity to marry mid-Atlantic and a honeymoon in New York. Encouragingly, since Cunard's wedding programme began, its onboard demographic has expanded. Known anecdotally for its older, staider, clientele, its cruises have begun to draw attention from a rather different customer base.

"Since Cunard’s wedding programme began, its onboard demographic has expanded."

"The demographic is varied," says Lenihan. "The weddings are attracting those who would typically cruise, but what's really rewarding is that we're reaching out to a new, younger audience, too."

It remains to be seen whether Cunard's Bermuda registration will detract from its quintessentially English credentials. But with weddings becoming ever bigger business for cruise lines, there can be no doubt that this offering is fulfilling significant pent-up demand.

In the meantime, for Anglophile diehards, there is a note of consolation to be struck. The first wedding onboard a Cunard ship took place on 29 April 2012. This was the date of the first anniversary of the UK's Prince William and Kate Middleton, and a sure-fire concession to Britishness after all. 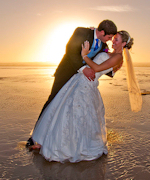 From the perspective of a soon-to-wed couple, the attraction is obvious. Cruise ships have long positioned themselves as hotbeds of romance, with 10% of US honeymooners sailing into the sunset. Image: Rfkphoto
Post to: