Strategic design consultants 20.20 masterminded the project that transformed the Mein Schiff I into TUI’s newest cruise ship, the Marella Explorer. Kevin Paintin, the fi rm’s client director, talks to Grace Allen about creating a strong brand identity with a sense of fun when dealing with the challenges of a refurbishment project.

A hot day by the sea, and you stop to pick up an ice cream from a pretty, retro-styled trolley, its awning decked out in sorbet-coloured stripes. An unconventional touch – you can sit facing the waves on seats modelled on bicycles. Elsewhere, chips and hot dogs are served to people in vividly painted beach huts.

Later, you might head for a drink at the local pub, the Squid and Anchor, which hosts live music, and whisky and gin tastings. But there’s no path down to a beach, and every day the views change – the wine-dark Mediterranean, the honey-coloured buildings of an ancient port town, with walls wreathed in bougainvillea; the lush green hills and soft sand of Antigua or Barbados.

Launched in May 2018 from Palma, Majorca, with glitz, fireworks and a Craig David DJ set, the Marella Explorer is the newest ship in TUI’s Marella line. With ten restaurants, a Champneys spa, numerous bars and cabins complete with terraces and hammocks, the ship is every inch the representation of modern cruising. In a previous life, however, she was the Mein Schiff I, part of German sister line TUI Cruises.

The task of transforming the tired and overwhelmingly beige interior of a liner first launched in 1996 into a ship representative of the modern TUI brand fell to London-based design agency 20.20, which had previously worked on the Marella Discovery and Discovery II. With a background in retail and landbased hospitality design – 20.20 first collaborated with TUI on its holiday design store – and without experience in maritime design, the firm was not an immediately obvious choice for the Marella line. Nevertheless, the colourful and quirky pitch struck a chord with TUI. “It was fresh and different, and I think they were excited by that,” says Kevin Paintin, client director at 20.20. “It just worked.”

Interior design is an art defined by its constraints. Nowhere is this truth more pronounced than aboard a passenger liner, an environment bound by unique technical demands, and with its own particular rules and challenges for space, materials and furnishings.

For 20.20, working in the highly engineered environment of a cruise ship necessitated a steep learning curve. “Coming into it with less experience than some of the more well-known, bigger designers, we had to get up to speed with a lot of technical, detailed information and knowledge on steelworks, flow, safety and everything behind the scenes,” Paintin explains.

Of highest importance in the process was the reinforcement and enhancement of the Marella brand established in 20.20’s design work on the Discovery and Discovery II. Paintin emphasises that a combination of a “home from home” with humour, fun and a touch of the unexpected are at the heart of this. “There’s a reason why we’ve got a pink piano in the lounge on the Explorer”, he says. “There’s a reason why we had llamas in the Discovery.”

While it should be mentioned that the Discovery’s llamas are brightly coloured life-size models, rather than live camelids roaming the decks, this self-aware eccentricity, present in the Marella Explorer, is obvious. “That kind of playful twist is there to help inform the strength of the concept,” Paintin says. “I think the injection of colour and fun, and that attitude from the TUI brand, is exciting and sets them apart,” he adds.

20.20 was also able to strengthen the Marella brand by bringing concepts developed for previous ships, such as the daytime-bites bar Snack Shack, on to the Marella Explorer. With its seating area in the form of brightly painted beach huts, and distinctive packaging, imagery and typography that recalls the charm of British seaside resorts, Snack Shack represents a design concept as fully thought-out and realised as any trendy beach bar.

It was kind of a no-brainer that we wanted to create this incredible bar, which would wrap around the dance floor and look out at the amazing views.

The creation of these mini-brands requires an understanding of the guests who will experience the ship, their interests and needs, and the spaces where they will spend their time. “Once you understand that, you can then design for them,” Paintin says, before adding that 20.20 put significant work into research.

From this point, the design is approached holistically. “From a 20.20 perspective, we have a team of strategists, graphic, interior and digital designers, so we are able to deliver the full experience,” Paintin clarifies. “We all sit in a room with the client, we brainstorm the concept, come up with all the different spaces – what we’re going to do, how we’re going to do it – and then we go through a naming process.” Colour, typeface, imagery and furniture specifications integrate with the structure provided with the ship to produce a harmonious concept.

A refurbishment project requires agility and flexibility, as the design team has to work with an unfamiliar ship where alterations to the structure may not be possible. “That’s the problem with a refurb,” Paintin says. “When you pull it apart – and you might not even have the plans all the time – you find things that you think ‘there’s absolutely no way on earth that we’re going to be able to shift this’.” He insists that 20.20’s approach is to create the dream and then work back from there when issues are encountered, otherwise you “never quite push the concept far enough”.

While some restaurant and entertainment spaces – Snack Shack, the pan-Asian restaurant Kora La, ice cream bar Scoops – were easily transferred into the Marella Explorer, the challenge of refurbishing a ship and working with the existing architecture demanded innovation. While the Discovery boasts a vast, multi storey atrium, which forms the centrepiece for the ship, alternative show-stopping spaces had to be created on the Marella Explorer.

Instead, the stern of the ship featured a space on one of the highest decks resembling an observatory, with floor-toceiling windows providing uninterrupted views of the ocean. This has become Indigo, a bar, casino and nightclub. “We thought, actually, this is one of the key spaces we need to focus on,” Paintin says. “It was kind of a no-brainer that we wanted to create this incredible bar that would wrap around the central dance floor, and you can stand at the bar and look out at the amazing views.”

A little-used area of the ship on the top deck provides the setting for another new development, the Hideout, which Paintin describes as a “jewel in the crown” of the Marella Explorer. With beanbags, games consoles and outdoor hammocks, the space is intended to provide older children and teenagers with a dedicated area that allows a little independence.

Combined with this is a need to think strategically about what aspects to preserve. Seeking to create a clean, sophisticated environment in the main fine-dining restaurant – named Latitude 53 for the location of the ship’s construction – 20.20 retained the brasswork and wooden panelling from the ship’s previous incarnation. Combined with a neutral grey and gold colour palette, pale leather and a sweeping staircase, the restaurant provides a modern echo of the cruise industry’s glamorous art deco past.

It’s about making sure you create relevant experiences that are believable, that customers want to engage in – that feel familiar to them but also different.

The use of colour is a noticeable strategy in 20.20’s work on the Marella Explorer. In the Mediterranean restaurant, touches of green, yellow and orange combine with an alfresco environment – provided by a retractable glass roof – to create a southern European feel; in the Lounge, the quirkiness of the shocking-pink grand piano is offset by purple seating and a colour-changing bar; while Aperitif, a speakeasy-style bar, features vibrant green metro tiles.

The value of colour is most obviously exploited in the Marella Explorer’s showpiece bar, Indigo. “Obviously, in its name it has a very particular colour,” Paintin says, explaining that the bar’s design elements were inspired by the open sea visible through its vast windows and the fractured, triangular shafts of light that reflect into the space.

The carefully designed and modern feel of the ship reflects the guests that 20.20 designed for – informed, savvy cruisegoers who have high expectations of the experiences their holiday will provide. “It’s about making sure you create relevant experiences that are believable and that customers want to engage in – that feel familiar to them but also different,” Paintin says. The Marella Explorer intends to offer a cruise experience that will surprise without feeling gimmicky.

He highlights the role of design in creating an environment in which holidaymakers can experience the best of a cruise. This includes the role played by TUI’s staff, who Paintin describes as “brilliant”.

“Fundamentally, we’ve designed a space that works around the guests and the service team,” he says. “The dialogue with the receptionist, the porter or whoever it might be – the kitchen staff, a waiter – makes memories as strong as the space itself. We’re almost facilitating the experience if anything.”

Paintin was present at the Marella Explorer’s launch, in May, finally able to see the ship hosting the people who were pivotal to her design. “It was amazing to see it in action,” he says. “When you’re in there, and it’s filled with people partying on the dance floor – it just felt perfect.” 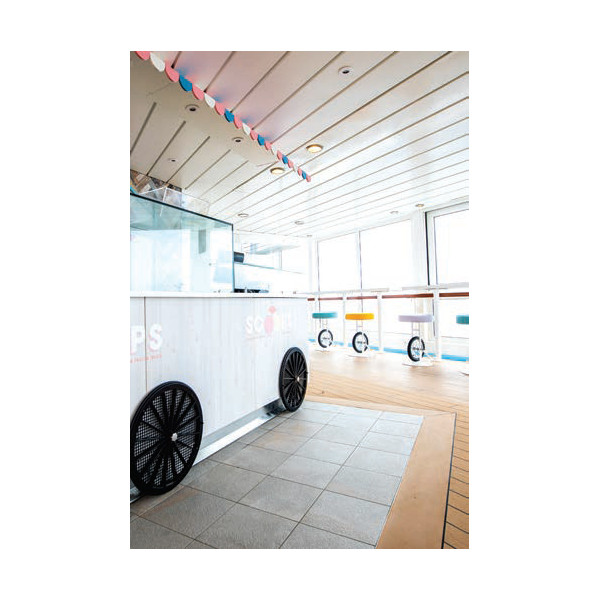 The employment of colour was crucial when designing the Marella Explorer. 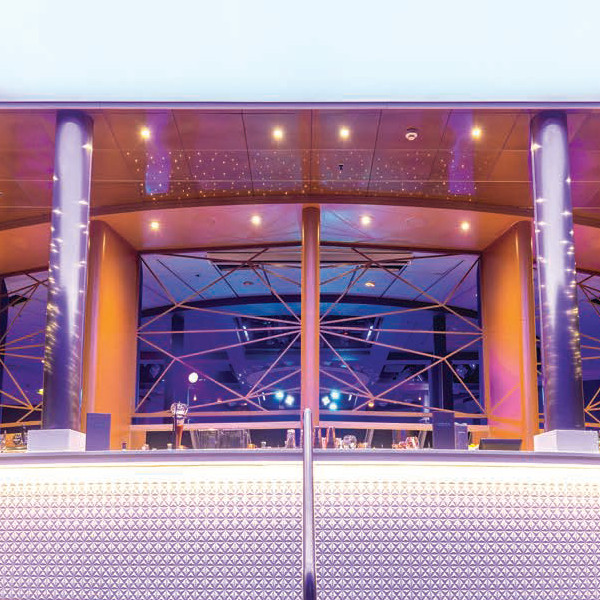 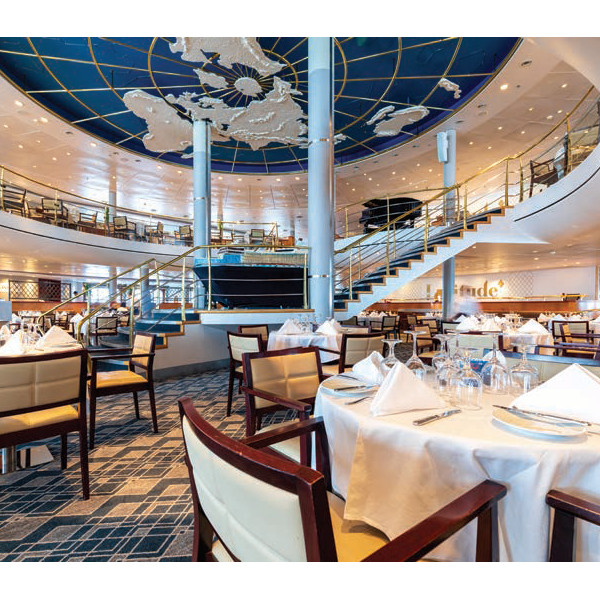 The Marella Explorer boasts ten restaurants, in addition to several bars, to ensure relaxation when aboard.

The Indigo bar, casino and nightclub sits within the stern of the ship and promises amazing views.
Post to: