While the cruise sector is keen to promote its efforts to protect the environment, reports last year from Friends of the Earth and German environmental group Nabu called into question whether more could and should be done. World Cruise Industry Review speaks to campaigners and hears the Cruise Lines International Association’s response to the criticisms in a debate that continues to be incredibly divisive.

While the cruise sector is keen to promote its efforts to protect the environment, reports last year from Friends of the Earth and German environmental group Nabu called into question whether more could and should be done. World Cruise Industry Review speaks to campaigners and hears the Cruise Lines International Association’s response to the criticisms in a debate that continues to be incredibly divisive.

Once again, the cruise industry finds itself under fire over its environmental performance. This time the indicter is German environmental group Nabu, the latest annual report from which has accused cruise lines of showing contempt for the health of their customers.

The paper is nothing short of damning. Ships, it claims, use up to 150t of fuel a day, emitting as much particulate matter as one million cars. Among the 63 ships surveyed, not one operator was deemed to have made any effort in reducing its environmental footprint. Industry bighitters Costa, MSC, Cunard and Royal Caribbean were all given ‘fail’ grades for reneging on prior pledges to clean up their fleets.

“Last year, the sector claimed 23 ships would be operating with soot filters,” says Nabu’s head of environmental policy, Dietmar Oeliger. “The truth is, not a single filter is working at present.” CLIA, the world’s largest cruise industry trade association, has unsurprisingly taken issue with the report, which was released in September.

In an official rebuttal statement, CLIA counters that the Nabu paper “gives rise to incorrect conclusions and misunderstandings”. It has also called into question the consistency of the campaign group’s evaluation methods.

Any improvements are only the requirements of mandatory regulations, most of which the majority of shipowners have lobbied against. – Faig Abbasov, Transport and Environment

“It is striking that, in some individual cases, the positions in the 2016 ranking vary significantly from those in the 2017 ranking, although the ship’s equipment has not changed,” says CLIA. “This is probably reasoned in the fact that the methodology of the ranking changes every year, making the evaluation inconsistent. The reconstruction of the ranking criteria becomes even more difficult as Nabu does not provide a legend for the ranking.”

CLIA also disagrees with Nabu’s comparison to car emissions, which it regards as inappropriate in light of the enormous scale of some passenger ships. “An automobile is a means of transportation for only a few people, that spends most of the time parked,” the association says. “A cruise ship provides transportation, accommodation, catering, entertainment and a whole lot more, and thus is comparable to a small city. Accordingly, in this case, a small city is compared to an automobile. It is quite obvious that this comparison is unreasonable.” While Nabu could not be reached for comment for this article, there are a number of environmental bodies that support its findings. Brussels-based campaign group Transport and Environment (T&E) believes the report simply cements the notion that the growth of the global cruise sector in recent years has come at the expense of a cleaner environment.

“The cruise industry has been prospering in the past two decades, and its impact on human health and environment is disproportionate,”says Faig Abbasov, T&E’s aviation and shipping officer. “The Royal Princess cruise ship can singlehandedly emit as much nitrogen oxide in only 12 hours at port as 435 passenger cars a year in Europe.”

A big part of the problem, claims Abbasov, is that ships, which spend most of their time on the high seas, are able to avoid the kind of public scrutiny afforded to the likes of the automotive sector. As a result, cruise lines are not under any obligation to make the necessary changes. “There is no incentive for shipping to curb pollution on a voluntary basis,” he says. “There is no open public pressure on them. Any improvements are only the requirements of mandatory regulations, most of which the majority of shipowners have lobbied against.”

Last year, environmental group Friends of the Earth produced its own scorecard on the cruise industry’s environmental footprint, the results of which were equally negative. Of the 17 cruise lines assessed – comprising of 171 ships in total – only one operator, Disney, scored an ‘A’ grade. The rest were all ranked at ‘C’ and below.

According to Marcie Keever, the group’s oceans and vessels programme director, cruise operators are performing particularly badly when it comes to transparency. “The industry presents itself as very green – we would dispute that,” she says. “We started grading the lines on transparency a couple of years ago, because they had been working with us for a while. Then they started refusing to provide information, or acknowledge our research, because they don’t like the report card.”

However, Keever admits some cruise lines are doing more than others to make their operations more eco-friendly. She applauds Royal Caribbean’s installation of advanced wastewater treatment system on board the majority of its 24 vessels. Princess, too, comes in for praise for the implementation of shore power connections, which allow its ships to use the local electric power system instead of their diesel engines when docked. However, she says, “they are terrible on oil pollution.

It is precisely this kind of inconsistency that continues to vex environmental groups, Keever believes. “It’s really difficult to match up some of those good intentions with – in some cases – such bad behaviour,” she says. In 2020, cruise lines will be obliged by law to cap sulphur emissions on marine fuels at 0.5%. It’s the least they can do, reckons Abbasov.

“Cruise operators’ business is booming. They have escaped unscathed from the global financial crisis and its impact on shipping – so they can afford to reduce their emissions,” he says. In the near future, Abbasov would like to see cruise operators give their support to a ban on the use of heavy fuel oils in the Arctic, as well as tighter air pollution standards in Europe.

Meanwhile, Keever says operators need to bring new technology to the engine room.“If they don’t already have it, they need to be installing the most advanced sewage treatment technology,” she says. “I’d also like to see more diesel particulate filters.”

However, according to CLIA, there are no ultra-fine particular filters currently on the market befitting of cruise ships. “The fact is that, at present, there are no filters that are fit for operational use in large ships’ engines that could filter out fine particulates from exhaust gases,” the group says.

“For this reason, the cruise industry has adopted various routes in parallel. On the one hand, work is proceeding intensively on developing filter technology; on the other hand, alternative fuels for ships’ engines are increasingly being used, such as liquefied natural gas.”

And so it goes. Amid the crossfire of accusations and counter-accusations, when it comes to the environment, it’s sometimes hard to derive much clarity from either side of the debate.

Are some cruise lines guilty of paying lip service as to their green performance? Or is the research from Nabu lacking in sound science, as CLIA claims? One thing is for certain: discussion over the impact of ships on the environment is not set to die down anytime soon. 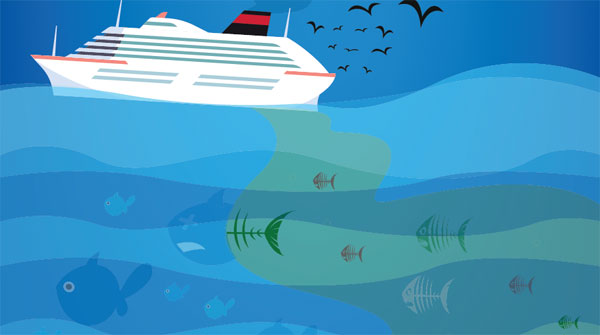 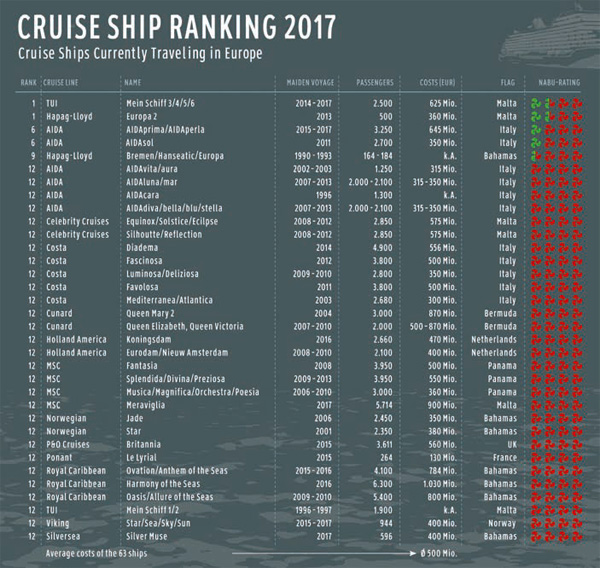 Nabu’s rankings of cruise lines according to environmental criteria.
Post to: