When Regent Seven Seas’ Seven Seas Explorer set sail on its maiden voyage in July, it was hailed as “the most luxurious cruise ship in the world”. With its supersized suites, seven open-seating gourmet restaurants, nine-deck atrium, two-storey theatre and $90,000 horsehair mattress, it is undeniably high-end, but can it truly justify this claim? Abi Millar takes a look at this bold celebration of all things opulent.

The luxury cruise sector is thriving. And with the likes of Crystal, Scenic, Silversea, Ponant and Seabourn all building new ships, the market is expected to see a 53% spike in passenger capacity between 2015 and 2018.

With that in mind, calling your vessel “the most luxurious cruise ship ever built” is bound to raise a few eyebrows. In an industry already replete with exotic itineraries, art-deco opulence and white-glove service, what does it mean for a ship to set a new luxury benchmark? Moreover, is Regent Seven Seas’ new ship, the Seven Seas Explorer, truly a contender for the title – or is this just a particularly audacious piece of marketing?

“If you walk through the vessel, you can see that luxury and timeless elegance abound everywhere,” Del Rio told a sceptical Bloomberg reporter before discussing the quality of sleep you can muster in a $150,000 Savoir No 1 bed.

True enough, the ship is an outlier by most metrics. Its space ratio is one of the best in the cruise industry: it weighs over 55,000t yet carries only 750 guests. A typical ship of this size might host around 1,250. Its guest-to-crew ratio is impressive too, at a low 1.36. So, even before the 2,000lb of lobster and 2,148 bottles of champagne for the ship’s maiden voyage are factored in, Regent Seven Seas has clout behind its claim.

Perhaps the more edifying question is not so much ‘is this ship truly the most luxurious ever?’ – a statement too subjective to properly verify – but ‘what does the highest of high-end luxury look like in 2016?’.

The vessel, which took its maiden voyage on 20 July, is the first new cruise ship for Regent since 2003 and the largest in its fleet, costing $450 million to build. According to Del Rio, the intention was to “shine a light on the brand”. He personally oversaw much of the design, which – despite having been undertaken by three firms – flows almost seamlessly.

Demand for a spot on the ship has been high since the outset, with many of the suites now sold out well into 2017. At a time of economic instability, fares might seem prohibitively high – starting at around $6,000 for a ten-night cruise – but this is unabashedly a ship for the very wealthy.

“The kind of customer we attract is very resilient to economic ups and downs; they’re resilient to the kind of geopolitical events we’ve seen this year,” Del Rio explained. “It’s a great time to launch this vessel and I’m very glad we did.”

These are the sort of passengers who, accustomed to the trappings of luxury in their day-to-day lives, are going to be even more exacting when on vacation. Before the design process got underway, Regent Seven Seas conducted many focus groups, trying to get to the bottom of what this rarefied demographic most desires.

One of the keys to the luxury offering was guests having all their needs met. Regent Seven Seas bills itself as the most inclusive luxury cruise line in the world, with every fare including round-trip business-class air travel (from 2017), cuisine, fine wines, sightseeing excursions and gratuities. For passengers in concierge and higher suites, there’s a pre-cruise luxury hotel package. If they’ve picked the $5,000-a-night Regent suite, they’ll also get a butler for the room, and a limousine and private driver at every port. In effect, this means a mind free of worry; for the duration of the trip, they won’t need to concern themselves with tabulating their spend.

The service it is offering is suitably broad too. Guests can enjoy a Broadway-style production in the two-tiered Constellation Theatre, hear some jazz in the Explorer Lounge, play golf on Deck 12 or unknot their shoulders in the Canyon Ranch SpaClub. Culinary offerings are diverse and well thought through, matched only by the carefully curated spread of entertainment.

Sleep and eat in style

The element that most clearly communicates the for-elite-seafarers-only intent is surely the ship’s design, with the Regent suite commanding the most attention.

“The opulence and elegance of the Regent suite is unmatched in the luxury vacation segment, and it truly epitomises the standard of the entire vessel,” explains Jason Montague, president and COO of Regent Seven Seas Cruises. “With Seven Seas Explorer, we built a ship that far surpasses the current standard for luxury.”

Measuring 4,443ft² – the size of a townhouse – the two-bedroom suite would not be out of place on Park Avenue. Styled in shades of brown, cream and black, it makes judicious use of exotic woods and marble. Moving into the dining room, your eye is drawn to the golden chandelier – perhaps the one obvious touch of ‘bling’ in a suite that otherwise doesn’t need to try too hard.

Of course, the Manhattan comparison only goes so far. It falls flat when you consider the in-room sauna and steam room (a world first at sea), and completely capsizes when you move out to the glass-enclosed ‘vista garden’, which has floor-to-ceiling views of the ocean. Then there is the custom grand piano, designed by Dakota Jackson and the aforementioned $150,000 bed, complete with its $90,000 horse-hair mattress.

The other suites, which fall across ten different category levels, are similarly plush without needing to broadcast it too literally. Spaciousness is key across the board (each averages 138ft² of balcony space), while colour schemes are elegant and decoration is intricate. If the Regent suite resembles Park Avenue, many of the other suites are pure Hamptons, taking their cues from the beachfront estate where the prototypal guest might spend their summers.

These designs are by no means subtle. The ship as a whole contains almost an acre of marble and 158 crystal chandeliers, and twin glass staircases winding up through a nine-deck atrium. There are 2,200 pieces of art on board, including a Picasso, and a 3t, $500,000 bronze sculpture. Yet, its overall aesthetic is far from brash – to draw an analogy with ultra-luxury hotels, it is more European grand dame than Burj Al-Arab.

Much like the suites, the ship’s public areas are luxuriously chic rather than ostentatious. The Meridian Lounge, for instance, is furnished with taupe leather and dark wood accents, the Explorer Lounge has the feel of a country club and the Observation Lounge harks back to the 1920s.

Each of the seven restaurants is based around a single, cohesive concept. The main dining room, Compass Rose, features an airy design motif with cascading blue chandeliers resembling waves. Pacific Rim takes its cues from various Asian cultures, and Prime 7 was inspired by London’s private dining clubs. Meanwhile, the Parisian restaurant, Chartreuse – designed by New York-based design studio ICRAVE – contains art-noveau flourishes, metal latticework screens and a wall of gold-leaf patterning. One of the first invited guests described it as “like dining in a sunset”.

Having sailed from Monte Carlo to Venice, Seven Seas Explorer will remain in Europe for its inaugural season. After that, it will sail to Miami for a season of Caribbean voyages. Regent Seven Sea Cruises is known for eclectic itineraries, with its fleet visiting more than 375 ports around the world. For the wealthy clientele that will climb aboard this ship, after all, luxury is as much experiential as aesthetic: all the Murano glass bowls and Versace place settings in the world would amount to nothing without the added thrill of destination travel.

So, has Del Rio created the most luxurious ship ever built? Whatever you make of the results, you can’t deny the boldness of his intention. 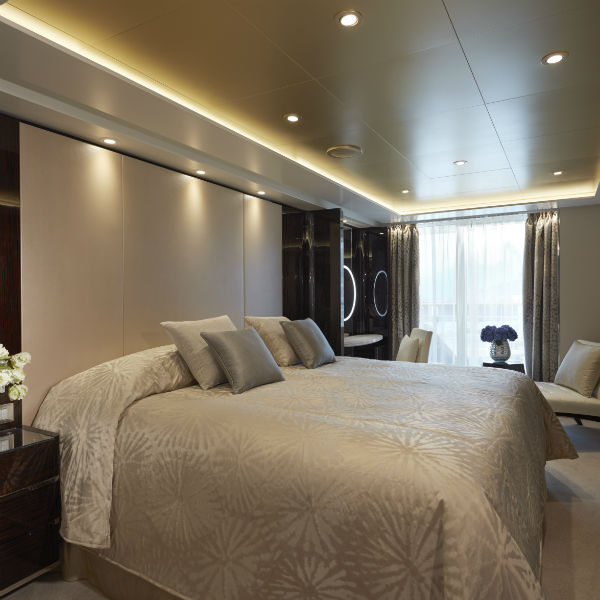 Each luxury suite has a sizeable balcony. 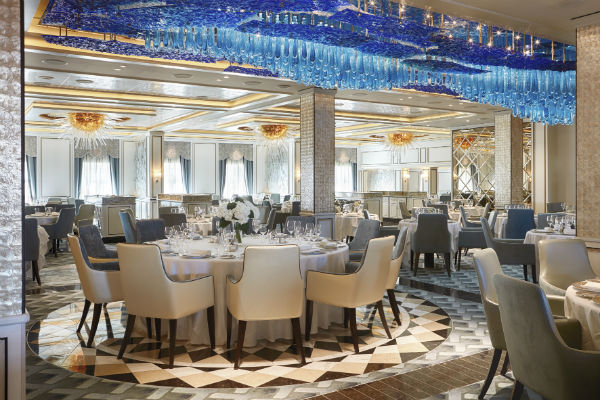 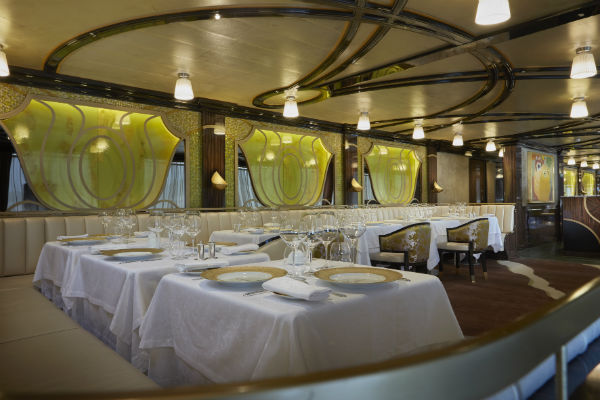 The Parisian restaurant, Chartreuse, was designed by New York studio ICRAVE and described by a guest as “like dining in a sunset”. 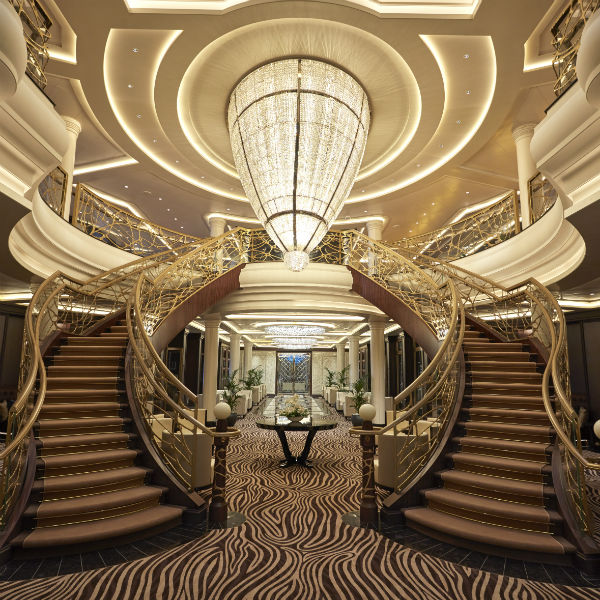 The atrium sets the aesthetic tone of the ship.
Post to: