How instagrammable can a cruise holiday be? That’s the question confronting cruise lines and the passengers they’re looking to attract. With multiple 2018 launches hailed for their Instagram-friendly designs, Tim Gunn turns to Instagrammers, social media managers, and entrepreneurs to find out how important the app might be to promoting and, ultimately, enjoying a cruise.

There’s an arms race at sea. Not the kind that involves cannons, thankfully – that was 100 years ago – but rather those arms that hold smartphones some 2–3ft out in front of faces and, from there, take selfies.

Here’s a quick timeline. In April 2018, shortly after ranking as Seahub’s most hashtagged cruise brand, Royal Caribbean crowed that its new Symphony of the Seas, the largest cruise ship in the world, was also the most Instagrammable. It even appointed an Instagrammer-in-chief, photographer Russ Francis, to help passengers document it. Before the year was out though, some critics began to murmur that the crown rightfully belonged to another. Royal Caribbean’s sister line, Celebrity, had their own claim – Edge, which is captained by Kate McCue, a 65,000-follower Instagram celebrity in her own right. Andwith Virgin Voyages – part-owned by a man with 2.3 million followers – launching the millennial-hungry Scarlet Lady in 2020, the competition is getting fierce.

Too fierce, perhaps; some contestants have already been left in the surf. Pursuing virality in January 2019, Symphony of the Seas passenger Nick Naydev jumped from the ship’s 11th floor into the sea as his friends filmed. Royal Caribbean called the stunt “stupid and reckless” and banned all involved from the company’s ships for life. At the time of writing the clip had more than 330,000 views on Instagram. Naydev later admitted that he “didn’t really think it through”.

If he had, he could have entered to win the cruise line’s ‘Shore Explorer Apprentice-ship’, a chance to join Instagrammer-in-chief Francis on a three-week stint as a dystopian-sounding ‘global experience hunter’, seeking out the best land-based excursions and earning £6,000 in the process. Before entries closed in early March, interested parties were asked to share their favourite travel experience on Instagram, tagging #ShoreExplorer and @RoyalCaribbeanUK. Naydev didn’t tag anything, but the fact that his was a sea-based experience is probably for the best.

In announcing the contest, Royal Caribbean pointed to research suggesting that 63% of millennials claim to get more fulfilment from seeking out experiences than from owning things and 43% would invest in experiences specifically to post about them on Instagram. Not that this is always a straightforwardly calculated decision. Naydev invested the price of an entire holiday into his post, which was captioned ‘full send’, a slang phrase that makes ‘without considering the consequences’ sound like a premeditated branding exercise. Succeeding on Instagram is a subtle art.

First, you need to grasp the fundamentals. Posts on Instagram consist of traditional images, videos or stories (collages of less-posed pictures and short clips that are only visible for 24 hours). As Shilpa Saul, Royal Caribbean UK’s head of PR and social media, explains, the importance of visuals to the cruise industry and Instagram make it “the perfect platform to bring features to life for our audiences”.

Accordingly, her favourite posts “come from guests who have tagged us in an image or video that shows the amazing ‘in the moment’ experience they’re having on board one of our ships or at one of our incredible destinations.”

Part of Francis’s role is helping Royal Caribbean passengers frame and compose such posts. In his view, the best of them have a knack for “showing the unexpected”. He also does just that across a whole fleet of ships and a world of destinations. Royal Caribbean even commissioned him to photograph the Perseid meteor shower from the deck of Explorer of the Seas, a task that required the crew to dim the lights and precisely position the 138,000t vessel just as the cloud cover off Alaska gave way to open sky.

Looking back, the photographer calls it “a crazy shoot”, but is quick to credit the crew for using it as an opportunity “to offer their guests a completely unique experience – explaining and bringing to life the incredible meteor shower for many who would otherwise not have known the significance of the magical spectacle taking place in the sky above them”.

Francis’s anecdote illustrates a lot of what makes Instagram such a valuable tool for cruise brands. Quite simply, a guest who associates the Perseid meteor shower with the Royal Caribbean brand is likely to come back. Equally, any number of Instagram’s one billion monthly users can have their mind changed or their eyes opened by a single cruise-customer’s experience.

That’s where Instagram stories come in. By giving users a chance to see the vast range of day-to-day activities that are available on cruise ships, and allowing them to follow an individual’s experience in something approximating real time, stories can help non-cruisers get acquainted with the concept of spending their time and money on a ship-borne holiday. These posts are all about showing what should be expected.

“There are still so many misconceptions out there,” says Charlotte Humphrey, manager of CLIA’s #ChooseCruiseClub influencer hub. “Services like Instagram stories are definitely the most influential way to debunk them. You can write an article or a blog post but you get a real feel from following someone’s journey in real time.”

For all of her belief in Instagram as a tool to increase the popularity of cruises, Humphrey realises that its impact is hard to measure. “It might not convince someone to book a cruise straight away, or even that same year,” she says. “But subconsciously they would be thinking about going on a cruise holiday because they’ve seen it in the past.”

That said, Royal Caribbean’s statistics show that almost a third (28%) of millennials made the conscious decision to book a holiday or experience after seeing it on Instagram.

For cruise lines, perhaps more than for anyone else, it is important to bear this in mind. “So many people are like, ‘I'm gonna be stuck on board,’” stresses Emma Le Teace, founder of Cruising Isn’t Just for Old People and the CLIA’s reigning cruise blogger of the year. “But things like daily vlogs and cruise videos give them a bit of security. It’s a bit like try before you buy. Cruising can be a bit overwhelming otherwise. People can get very anxious.”

On the other hand, Instagram thrives on anxiety. Saul says that declaring Symphony of the Seas the world’s most Instagrammable ocean-going vessel “played nicely into the growing trend of holiday choices being based on ‘brag rights’.” Like so much great advertising, Instagram is simultaneously about making people feel included and left out.

“We live in a generation of people wanting to be seen in the most amazing locations, experiencing the most amazing things,” explains Francis. “And Instagram enables that.” The press release for the Shore Explorer competition goes further, pointing out that the “‘do it’ rather than ‘own it’ trend is largely being driven by social media”.

Yet the 51% of millennials surveyed by Royal Caribbean who said that they would rather spend their money on memorable experiences than material possessions intuitively understand that the promise of social media is that it allows them to own what they do. By properly enabling Instagram, cruise brands are able to offer passengers the transient experience of holidays and more permanent-feeling digital products: posts.

28%
The percentage of Booking.com customers see travel as a potential opportunity to earn a living as an influencer.
Booking.com

Once you own what you do, it’s not too much of a leap to start selling who you are. According to Booking.com figures, 28% of the service’s customers see travel as a potential opportunity to earn a living as an influencer or travel blogger as opposed to having a traditional full-time job. Put another way, Francis isn’t just a fantastic representative for Royal Caribbean, he’s also a role model for the third of people who pay for holidays so they can do more work. Fittingly, CLIA’s #ChooseCruiseClub is a stripped down version of the service they offer to travel agents.

The idea behind the photogenic designs of ships like Symphony of the Seas and Celebrity Edge is to make passengers double as effective marketing staff. By holidaying on ships like these and availing themselves of the opportunities to take the same unexpected, brag-worthy pictures as everyone else, customers, and millennials in particular, are able to invest in their own brands, ideally increasing the interest in cruise lines in the process.

“The cruise brands that are investing in providing customers with beautiful on-board scenery are giving real value,” reasons Rob Bezdjian, CEO of Zaven Global, which works with Amadeus Cruises to attract millennials with influencer-led river itineraries. “They’re hoping that the clients and customers will be able, by taking pictures, to add real value back.”

Notice the “hoping” there. For Bezdjian, Instagram is a hall of front-facing cameras. To succeed, you need to be able to discern the difference between true and perceived value. A lot of people making a lot of noise about your ships on social media could just as easily bore potential customers as bewitch them.

It bears remembering that Instagram is not the force causing meteor showers, but an eight-and-a-halfyear- old way of sharing pictures of them. Despite the tone of the marketing interest, social media platforms can come and go. During 2015–18, the percentage of US teenagers who said they used Facebook fell from 71% to 51%. Given the negative headlines the platform has spawned over that time, a ship built in 2015 to attract younger cruisers with its Facebook functionality would look absurd today. If anything, it would have been a more expensive way of appealing to the same older cruisers as any other ship.

Over the same time frame, the number of teenagers using Instagram has made almost the exact opposite movement, rising from 52% to 72%, but Bezdjian cautions that this may well be the platform’s peak. “Each new way to advertise is really amazing and awesome and wonderful at first,” he says. “And then people become numb to it. People peddling things on Facebook and Instagram dilutes the platforms.”

Either way, cruise lines are going full-send for Instagram fame. And Royal Caribbean did launch a ship in 2015. It was called Harmony of the Seas. There’s a slide on it called the Ultimate Abyss, the tallest drop at sea. It was so successful that the company installed it on Symphony, too. Looking out of his 11th floor window on that ship, Naydev still thought he could go one better.

In search of a fairer industry 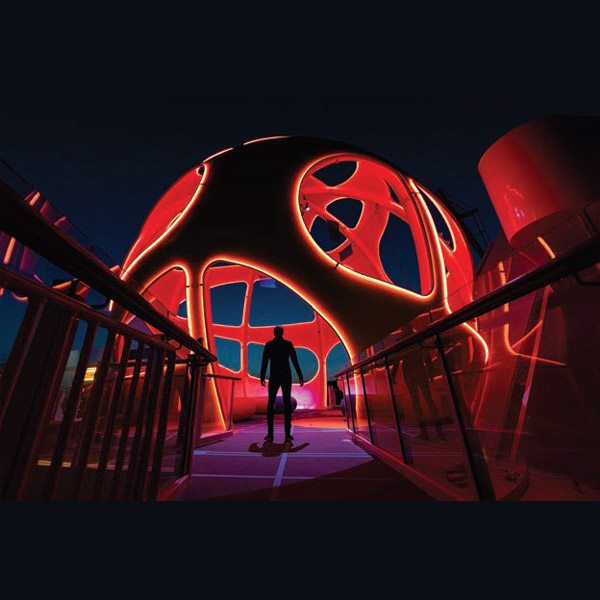 Royal Caribbean’s Independence of the Seas lit up at night, captured by Russ Francis. 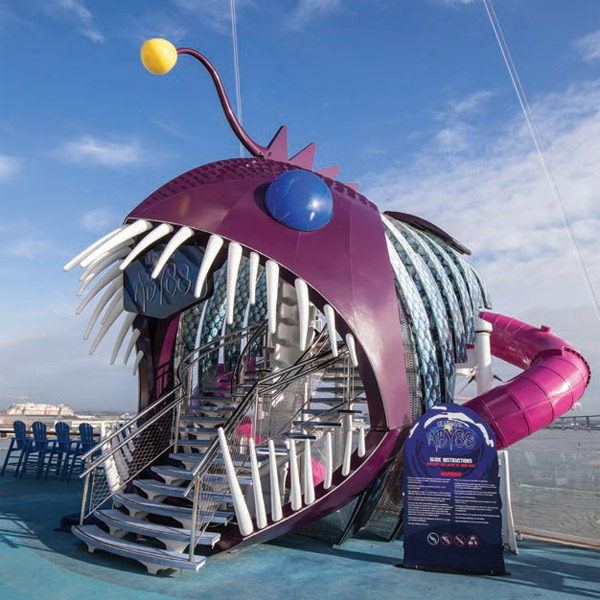 The entrance to the Ultimate Abyss slide aboard Symphony of the Sea. 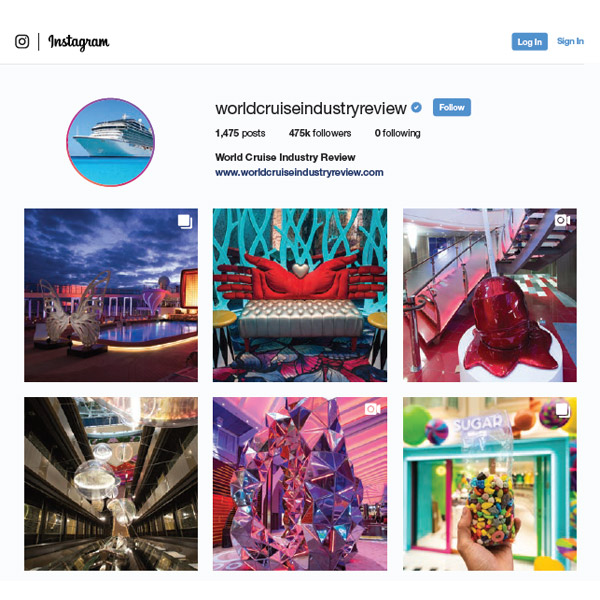