The ship’s come in

Built in Germany and named for the historic Scottish abbey, the Iona will be the largest cruise ship ever built for the UK market. Jim Banks talks to P&O Cruises’ president, Paul Ludlow, about the ship’s facilities and the operator’s wider ambitions to attract younger passengers with the vessel as it goes into service in 2020.

In May 2020, the largest cruise vessel ever built for the UK market is due to set sail from Southampton and head for the Norwegian fjords. After a summer in Scandinavia, it will head south for the winter to the Canaries, Spain and Portugal. Christened the Iona, the vessel represents the dawn of a new era for P&O Cruises.

“We are an island nation, and as the UK’s favourite cruise line it seems very fitting to highlight one of our most notable islands and celebrate the geographic diversity of the UK, especially as we can trace back our roots to the Scottish Isles,” says the president of P&O Cruises, Paul Ludlow, about the vessel’s name. “Iona played a significant part in shaping the history of our nation, and we hope that with this very special name our new ship will shape the future of holidays at sea for generations.”

The vessel will carry a maximum of 6,600 passengers, but its size is far from being its only remarkable feature. P&O’s first new build in five years, Iona is also the greenest cruise ship built for the UK market, powered entirely by 3,620m3 worth of liquefied natural gas (LNG). The gas is pumped from dedicated storage tanks through a heat exchanger, where it is turned into gas and delivered to the engines.

“LNG as the primary source of power reduces exhaust emissions to support our sustainability goals,” explains Ludlow. “Iona will not only be the most environmentally efficient ship in our history, but she will also be the first British cruise ship to be powered by LNG. She paves the way for the future of cruising with zero sulphur and nitrogen emissions, and a significant reduction in carbon.”

The use of LNG inevitably has a big impact on the design and construction of the vessel. Iona has Wartsila LNG engines, which provide electricity for the propulsion system both in ports and on the open sea. P&O Cruises has worked closely with partner Shell and has joined the Society for Gas as a Marine Fuel, as well as other associations, to ensure that it is up to date with best industry practice.

“With any new innovation we need to make sure our crew are all familiar and properly trained to use it,” says Ludlow. “All of Iona’s officers will be able to see how it works on two other ships in the Carnival Corporation fleet that have already been fitted for LNG – Aida Nova and Costa Smeralda. The main focus for fitting LNG to Iona is around a supply chain built into Southampton – we are developing the infrastructure to support LNG and looking at a biweekly supply to refuel Iona and future LNG ships.”

With the right infrastructure in place, refuelling can easily be done within the ship’s normal in-port turnaround time of 8–12 hours. It can also call upon other LNG hubs in Rotterdam and Zeebrugge, as well as facilities on the coast of Norway and in the Baltic Sea.

“LNG is a fossil fuel, and the cleanest and best available,” says Ludlow. “We have chosen it for Iona to make her the most environmentally friendly ship in the cruise market. It contains no sulphur oxides, while nitrous oxides are reduced by more than 80%, and particulates are down to 90%. There is a reduction in carbon content as well, so LNG puts us on the pathway to the low-carbon economy.”

Designed for a new generation

Construction of the €700 million, 180,000t Iona was announced in September 2016 and began the following April. It is taking place at the Meyer Werft Papenburg shipyard in Germany, which has an enviable track record of producing innovative ships with high levels of operational efficiency. Back in June, P&O Cruises celebrated a key stage of construction with a bronze coin from the historic Iona Abbey and a slice of precious green marble from the site placed under the block housing the bow thrusters.

The ship’s central steel block – otherwise known as the mega block – measures some 21.5m in length, 19.4m in width and 9.8m in height. It weighs 461t and was lifted into position using a 600t crane. Now the focus is on the block assembly of the bow and forward part of the ship before this section is welded to the central block.

“Putting a ship of this size together is an amazing feat of engineering, with cabins being produced in a specialist factory, ready to be slotted in as the hull takes shape,” remarks Ludlow.

The construction process will also incorporate novel design aspects, including the SkyDome, an exclusively designed glass dome that will provide a unique space for relaxation in all weathers, as well as a venue for live entertainment.

“The build of any ship is an incredible achievement, but to see one of this size and scope is an extraordinary feat of skilled design and engineering,” says Ludlow. “To view Iona’s SkyDome take shape was literally breath-taking – no other ship in the world has a glass dome of this quality of construction and scale.”

“LNG is a fossil fuel, and the cleanest and best available. We have chosen it for Iona to make her the most environment-friendly ship in the cruise market.”

Such design aspects are part of a strategy to attract younger passengers to P&O Cruises. While cruising is rising in popularity across all age ranges, the line deems it especially important to target the next generation.

“Younger demographics are attracted to the flexibility and choice available on cruises, from discovery to dining,” believes Ludlow. “Millennials have a need for exploration, knowledge, learning and adventures, and cruising offers all of these things. Iona will help challenge the perceptions and misconceptions about cruising that we are tackling head on. She will offer holidays to a whole new contemporary generation who appreciate the intricacies of great design and extraordinary spaces for eating, drinking, dancing and relaxing.”

Iona will feature enhancements to already successful brand signature venues from the existing P&O Cruises fleet, as well as features newly developed for this ship. Along with the SkyDome, these include a three-deck atrium in the heart of the ship. She will also be the first in the fleet to have conservatory mini-suites, which add space to the cabins to create an outside space for the living area.

“With a choice of 30 different venues, many open from early morning until late at night, Iona’s guests will enjoy the widest ever selection of places to eat and drink on a ship built exclusively for the UK cruise holiday market,” says Ludlow. “A new ‘foodie’ market is another exciting development, and The Quays piazza will have a wide range of self-service and takeaway venues with cuisines from all around the world, from Asian street food to American diner classics.

“Entertainment in the SkyDome, which features an impressive roof and a pool with retractable stage, will be the crowning glory on top of Iona, providing a new home for on-board entertainment, along with a ‘hidden’ night club and boutique cinema,” he adds.

The strategy is already showing signs of success. P&O Cruises reports that nearly half of the passengers booked to sail on Iona are under the age of 45.

“We are bringing together 180 years of history and experience to create the next generation of P&O Cruises’ ships,” says Ludlow. “We have a bold and ambitious vision for P&O Cruises to become the UK’s number one holiday choice, and we can only do that by increasing our fleet. Iona will offer all generations of UK guests the holiday of a lifetime on the next generation of P&O Cruises ships. Our signature features in dining and entertainment will be across all our ships, but the space and build of our two new ships allows us to have innovative experiences to create the most memorable holidays.” 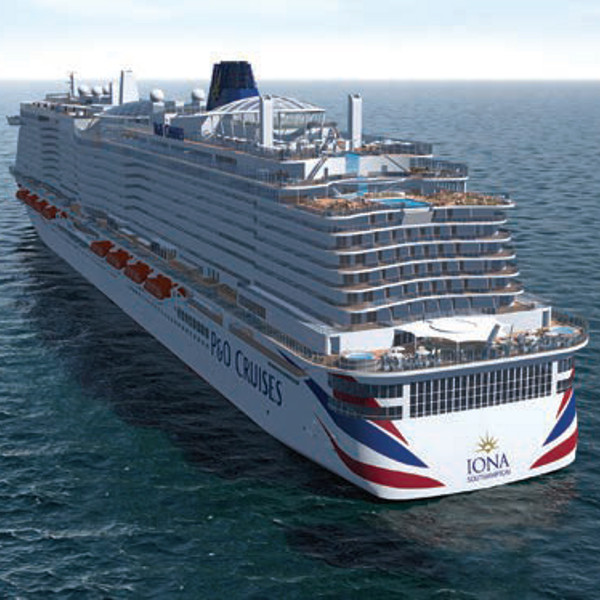 The Iona at sea. 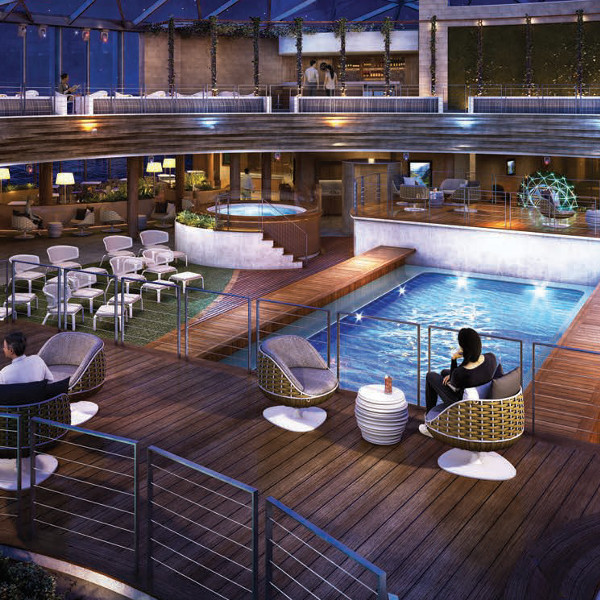 The mezzanine over the swimming pool on board the Iona. 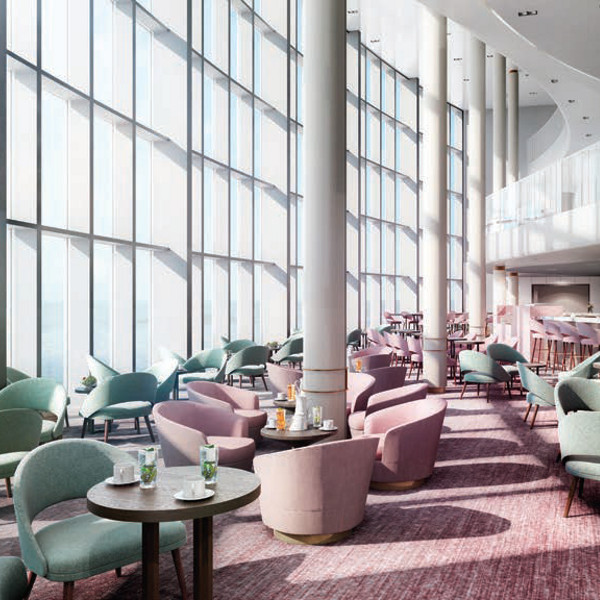 A café on board the Iona 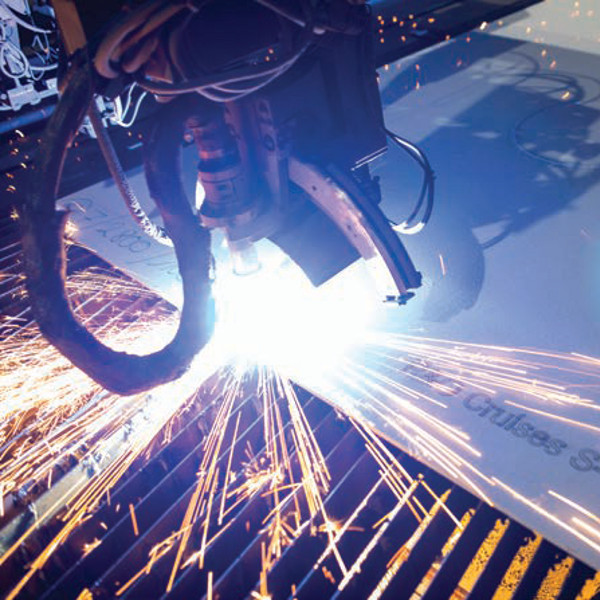