The revolution is here

The project will be gigantic. Beginning in 2019, the entire Celebrity Cruises fleet will be renovated to reflect the design philosophy of Celebrity Edge, the brand’s latest award-winning ship. Fresh from setting the aesthetic agenda for the Edge class, Kelly Hoppen is lending her expertise to this $500 million revitalisation project, the so-called ‘Celebrity Revolution’. Isabel Ellis talks to the renowned British interior designer about applying her signature east-meets-west luxury on the grandest scale.

A revolution can be many things. For some, it signifies a clean and refreshing break with dogma, a step forward long in the asking and short in its execution. For others, the idea of a revolution stretches no further than its literal meaning – a disruptive turning of the circle, wherein the pace and ferocity of change inevitably leads its instigators all the way back to where they started.

A revolution is taking place at Celebrity, albeit in design – barricade makers can rest easy. Across the operator’s fleet, rooms are being reworked and rejuvenated to match the aesthetic of the Celebrity Edge. By 2023 there will be four new Edge-class ships in service, and every other ship in the fleet will have been upgraded and modernised according to their template. At the end of this particular revolution, the line believes guests will have found a new way to connect with the ocean.

Still, neither the size of the budget nor the scale of the project it’s been set aside for truly accounts for the brand’s use of the ‘r’ word. The real difference between renovation and revolution is more principled and personal. Across all of its ships, Celebrity has asked British interior designer Kelly Hoppen, queen of taupe and neutrals, not to mention a world-renowned creator of comfortable, understated luxury spaces, to challenge what she calls the “dated perceptions of cruise holidays”.

“In terms of scale,” says Hoppen, “this is unlike any other design project I have ever completed.” The South African-born designer knows what she’s talking about. Only 16 when she completed her first interior design project, she’s since worked on jets, offices, restaurants, hotels and homes for commercial clients and celebrities ranging from Disney to the Beckhams.

“As with all design projects,” she continues, “there are lessons and skills learned that can be translated into future projects, and this is how I intend to approach the transition from the Celebrity Edge to the forthcoming ships in the series. With each new design, we aim to defy conventions and surpass expectations even further; each one will get better and better.”

Whatever the branding says, an upgrade programme can only change so much. Whereas Kelly Hoppen Interiors were involved in designing nearly every space on Edge and the upcoming Apex (she’s particularly proud of the former’s spa, which celebrates the healing power of crystals), the revolution will confine her team to the exclusive suite-class areas of each ship. Guests there can expect upgraded room layouts and furnishings, as well as access to the new Retreat Sundeck and Retreat Lounge, all of which will exemplify her signature east-meets-west aesthetic.

That’s not to say Hoppen’s influence won’t extend any further; the rest of the brand’s staterooms will also be replacing drapes and garish burgundy accents with clean lines and soft neutral tones. They are being modernised by international hospitality design firm Hirsch Bedner Associates (HBA) to evoke a complementary ‘boutique hotel’ feel.

In the revolution’s promotional videos, which ask, “What if we took our entire fleet to the Edge?”, Hoppen explains that she wanted to create the sort of fleet-wide luxury that she associates with Rolls- Royce – one that can grow with time. On the Retreat Sundeck this means “a chic enclave” of cabanas and seating areas precisely measured for cocktails, conversations and sunsets. At the Retreat Lounge, meanwhile, Hoppen has brought together an eclectic, sophisticated selection of furnishings and decorations to create a calm oasis where Suite-class guests can plan excursions with the concierge service, or just enjoy the exclusive food and entertainment.

Though she had previously designed yacht interiors, Hoppen had never even set foot on a cruise ship when she was contacted by Celebrity. Along with her style and expertise, she brought the brand a chance to rethink its visual identity from a ‘new-to-cruise’ perspective. For her, this meant interrogating the relationship between the excitement of continual sea travel with Celebrity’s emphasis on luxury relaxation.

“I wouldn’t say that there is tension between luxury and adventure,” she says thoughtfully. “I’d say the two concepts share a dynamic that should be explored more through design.” It’s her belief that Celebrity Edge has achieved the perfect balance. “By combining home comforts with luxury interiors on a cruise, guests are free to explore and go on adventures on land, and then come back to a place they can feel totally relaxed and at ease while sailing to the next destination.

“By combining home comforts with luxury interiors on a cruise, guests are free to explore and go on adventures on land, and then come back to a place they can feel totally relaxed.”

“The design in itself is unlike anything you would expect from a cruise,” she continues. “We completely threw out the rulebook and just designed each room as we would any other room on land. The only difference is the logistics as the furniture needs to be fixed in place. The attraction was to change people’s perception of what a cruise was and to make it very luxurious – literally beyond anyone’s expectations.”

Although Hoppen says Celebrity Edge “almost” makes it possible for guests to forget they’re on a ship, it’s also designed to give them a more intimate experience of the ocean than any of its competitors.

Indeed, there’s nothing else like the Magic Carpet, a floating, cantilevered platform that moves up and down between decks on the side of the ship, on either land or sea. Designed by Tom Wright, the architect of the Burj Al’Arab, and furnished by Hoppen, the full bar and entertainment space transitions from an evening dining venue hovering 14 storeys over the ocean at its highest point, to an extension of the main pool deck a notch below, and an outdoor lunch pavilion for the deck-five restaurant Raw. Once it’s made its orange and not particularly neutral way down to deck two, it becomes a special surf-skipping Edge Launches tendering area. And the Magic Carpet isn’t the only aspect of the design that blurs the boundaries between Edge and the water. Far from merely mimicking land-based accommodation, Hoppen’s Infinite Veranda staterooms seamlessly merge terrace and living space, opening the whole room to the sea.

“The inspiration came from the tranquility of the sea, and I designed the rooms to make the most of the incredible views. The idea of creating this luxury, transient world at sea really intrigued me.”

By replacing the traditional structural boundary between inside and out with automated bifold doors, Celebrity was able to make each veranda stateroom 23% larger. Equally, Hoppen and her team installed retractable, multipurpose tables and fold-up vanity mirrors to save on space without compromising on the luxury hotel feel. As she says, “One of the most difficult aspects of designing a ship is maximising storage in order to make the space liveable, without compromising the luxury of movement and space.”

At the same time, Celebrity’s structural innovations gave Hoppen more architectural freedom than many cruise ship designers. “For me, any space always has walls and you just create within them,” she says, “but we worked so closely with [Royal Caribbean vice-president of new-build architectural design] Kelly Gonzalez and her team to make all transitions immaculate.” There’s even a sense in which the technical developments that make Edge so uniquely outward-facing actually gave Hoppen the freedom to think of the accommodations as luxury hotel suites.

$500 million
Cost of the ‘Celebrity Revolution’.

“I wanted to combine modern comfort with the old-school glamour of cruise ships, and to make passengers feel completely relaxed, as if they were on a five-star hotel at sea,” she explains. When designing a hotel, Hoppen takes inspiration from its cultural and geographical context, but she couldn’t pretend that Celebrity Edge didn’t move. “The inspiration came from the tranquillity of the sea, and I designed the rooms to make the most of the incredible views. The idea of creating this luxury, transient world at sea really intrigued me. A cruise is an adventure, and this inspired my decision to create comfortable and liveable interiors that balanced the exhilaration of seafaring.”

Again, marketing campaign notwithstanding, not every ship can redefine the way guests connect with the sea. Still, it is possible to create balanced comfort without taking a revolutionary new approach to ship design. Everyone on the upgraded Celebrity Summit can, for instance, connect to high-speed Wi-Fi or avail themselves of the completely redesigned stateroom en suites; and who in suite class doesn’t want a hot tub on their exclusive sundeck? The little things add up.

“I think it will create a different type of cruise experience, with luxury and relaxation at the core,” says Hoppen. As one of the first guests to travel on Edge, she can speak from experience. “It was one of the most surreal and wonderful experiences I’ve ever had,” she enthuses. “To feel so comfortable halfway around the world at sea, having never experienced a cruise before, was amazing.

“There has been so much positive feedback, which I am so pleased about. When I was on board, people were approaching me every day saying how they didn’t want to leave their staterooms, or how much they enjoyed the spa, and how they felt amazing in the space.

“It’s so satisfying to be able to make guests comfortable on a ship in the middle of the ocean.” 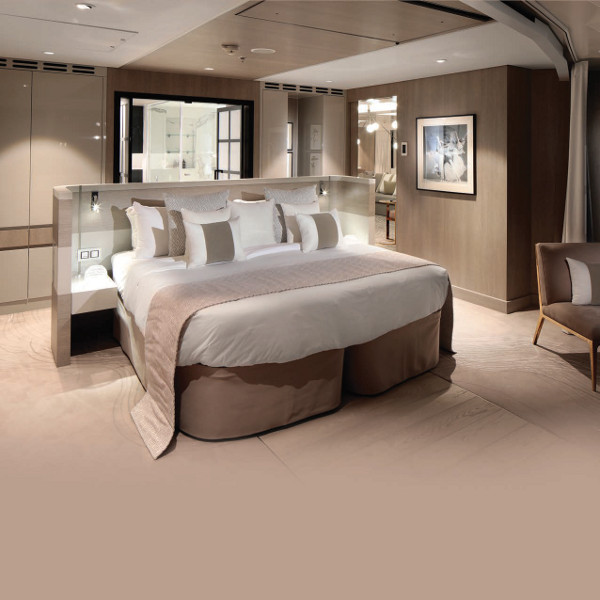 The master bedroom of an Iconic Suite. The Magic Carpet, which travels between floors on the Edge. 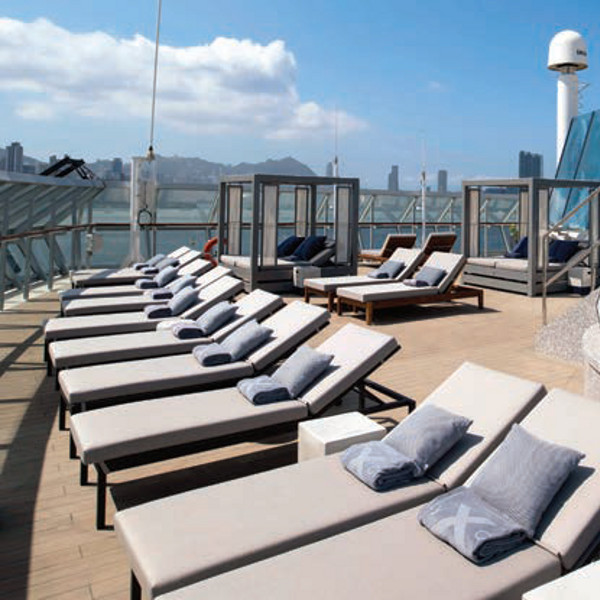 The luxury Retreat Sundeck, where passengers can sip cocktails and relax. The stylish living room area of one of Celebrity Edge’s Royal Suites.
Post to: