A European Commission decision on whether to approve Fincantieri’s merger with Chantiers de l’Atlantique has been delayed, but, whatever the call, it is likely to have a profound impact on cruise shipbuilding on the continent. With uncertainty only further increased by the impact of Covid-19, Adele Berti looks back at the troubled history of this agreement between two of Europe’s three largest yards, and hears from experts on what any decision might mean for the sector at large.

With current clients on the order book including Virgin, Princess, Costa, Silversea and many more, Italian shipbuilder company Fincantieri owns one of the largest and busiest cruise shipyards in the world. In 2018, the company announced a deal to merge with one of its two largest competitors in Europe: France’s Chantiers de l’Atlantique. Given the scale of the proposal, and the relatively small cruise shipbuilding sector, it was perhaps unsurprising that the move quickly entered choppy waters. France, which had originally signed the agreement with Fincantieri, joined by Germany, requested that the European Commission (EC) investigate the deal, leading the EC to open an antitrust investigation in October 2019.

Of particular concern is the potential for establishing a monopoly in European cruise ship construction. Fincantieri and Chantiers de l’Atlantique handle a significant portion of cruise ship orders in Europe and worldwide, with Germany’s Meyer Werft completing the continent’s dominant top three.

According to preliminary conclusions, the latter risks being penalised by the merger, which would reduce the number of leading European shipyards from three to two, and in turn, disrupt the continent’s market dynamics. Despite being a major cause of concern for Germany, France and local trade unions, the deal is nevertheless gaining approval among many stakeholders, who believe it could boost Europe’s international prestige in the face of growing competition from Asian and US shipyards. The fallout from Covid-19 is also starting to be felt, but more in terms of short-term logistics than a broader sense of priorities and outlooks for the European shipbuilding industry over the medium and longer term.

As debates continue both inside and outside the European Parliament, the EC had initially given itself until April 2020 to decide on the deal’s fate. In March, regulators suspended the investigation after Fincantieri missed a deadline for submitting requested information – a failure that EC spokesperson Arianna Podesta, in a briefing to Reuters, said could be put down to the challenging circumstances created by Covid-19. The development has cast new doubt on the deal being formalised, but, whatever the verdict will be, it is likely to reshape the future of the European shipbuilding sector for years to come.

The story starts in 2016, when Chantiers de l’Atlantique – which was then operating as STX France – was put up for sale after its owner, South Korea’s STX Corporation, announced bankruptcy.

“In 2016, the company was initially placed under a receivership,” explains Arnaud Touati, an associate lawyer at Paris-based Hashtag Avocats who specialises in corporate law. “This is a collective procedure that is not yet a liquidation, but rather a way of allowing the company to put itself in the best possible conditions, to help it breathe financially.”

Fincantieri swooped in and agreed a deal to acquire 66.6% of the company for the incredibly low fee of €7.9 million. The French state would retain the remaining third in ownership. This was not enough for the government of the French president, Emmanuel Macron, which blocked the deal and instead proposed a 50/50 partnership. Fincantieri rebuffed the offer, leading to Chantiers de l’Atlantique’s temporary nationalisation, with an 84% stake put under the control of Agence des participations de l’État, the French government shareholding agency.

Fincantieri itself has a similar ownership structure, with the Italian government – in the form of state-run financial management company Fintecna – currently holding over 71% of the company’s share capital.

The French were seemingly less invested in a longterm ownership model. By February 2018, Fincantieri was announcing having reached an agreement to purchase a 50% stake in the company from the state in a deal worth €59.7 million.

As part of the deal, Reuters reported at the time, Paris also agreed to lend a 1% stake to Fincantieri for 12 years, effectively giving it voting rights and access to Chantiers de l’Atlantique’s share dividends. In return, the Italian company made a number of commitments on jobs, governance and intellectual property.

Fast forward more than two years, however, and the deal is still yet to come to fruition. It was first formally brought to the attention of the EC by the German and French governments in January 2019, when they jointly signed a referral to the EU antitrust authority.

“We will carefully assess whether the proposed transaction would negatively affect competition... to the detriment of the millions of Europeans.”
Margarethe Vestager, European Commission

Germany’s motivations are clear, but Paris has not disclosed the reasons behind its U-turn. Touati speculates that the prospect of becoming a minority shareholder in Chantiers de l’Atlantique could have influenced the decision. “If the transaction does take place,” he explains, “it would mean that the French state won’t have more than [a] 41.67% stake [in] Chantiers de l’Atlantique.”

This change would be particularly significant when comparing the two companies’ turnovers in 2018, he explains. “In that year, Chantiers de l’Atlantique registered a turnover of €1.5 billion, while on the other hand, Fincantieri’s turnover was about €5.5 billion.

“This is key information to analyse the financial operation, which at the moment is undergoing extensive review by the EC, and if successful, will make the French state a minority shareholder.”

Regardless of the motives at play, in October 2019, France and Germany’s joint request triggered the EC’s in-depth antitrust investigation. Its findings were initially scheduled for publication in March 2020.

In the aftermath of the first announcement, Commissioner Margrethe Vestager, who oversees competition policy, said, “Demand for cruise ships is booming globally. Chantiers de l’Atlantique and Fincantieri are two global leaders in this sector. This is why we will carefully assess whether the proposed transaction would negatively affect competition in the construction of cruise ships to the detriment of the millions of Europeans taking cruise holidays every year.” Preliminary conclusions have already identified the transaction as unable to meet the turnover thresholds of the EU Merger Regulation, as well as being potentially damaging for a continent that is already struggling with capacity constraints.

“The Commission has identified high barriers to entry in this market, related to the very complex nature of cruise shipbuilding,” an EC statement read. “Cruise shipbuilding requires, in particular, specific infrastructure, established engineering and design capabilities, as well as important project management skills to coordinate hundreds of suppliers and subcontractors all along the construction process.”

The EC also found it unlikely that “a timely and credible entry from other shipbuilders” would counteract the possible negative effects of the transaction, reducing competition in the market for cruise shipbuilding, and leading to “higher prices, less choice and reduced incentives to innovate”.

But this was all back in October 2019 when the sector was booming and order books bulging. Following the devastating effects of Covid-19 on the cruise industry at large, it remains to be seen how far attitudes have changed over the past few months – opinions could be less dogmatic. While Chantiers de l’Atlantique remained silent on the issue, Fincantieri issued a statement prior to the launch of the EC’s investigation. “Fincantieri expresses its firm disapproval of such a decision, if confirmed, particularly in case it was based on the alleged reduction of the European players from three to two,” the Italian shipbuilder said. “Following the transaction, there would still be three cruise shipbuilders in Europe, as opposed to the current four.”

Among the loudest opponents to the deal is French trade union Force Ouvrière, which represents employees at Chantiers de l’Atlantique’s shipyard in Saint-Nazaire, on the west coast of France.

Commenting on the EC’s investigation in October, the union argued that the transaction would make the shipyard lose its authority and governance, with potentially negative consequences on direct employment and subcontracting. “Our yard has the ability to land orders without being backed by a large group, and the ability to finance them at more attractive rates than those enjoyed by Fincantieri,” the statement added.

On the other side of the Alps, however, Italy’s point of view looks radically different. In January this year, a number of Italian MEPs criticised the review, labelling it an obstacle to the development of the European economy. “In the shipbuilding industry, we [Europe] are already losing our lead on almost all fronts,” Massimiliano Salini, a member of the European People’s Party, told the press. “China and South Korea are now ahead of us in fields ranging from submarines to motorboats, but we remain a leader in cruise shipbuilding. This temporary block is weakening us... especially from a manufacturing point of view.”

Echoing his words, Touati believes that creating one or two “European champions” – instead of remaining more locally fragmented – would make the continent more competitive against shipyards from the US and Asia. Some have even gone so far as to say the deal has the potential to create a “naval Airbus”.

“We should have one or two European shipbuilding candidates that are much stronger and more powerful,” Touati claims. “There are shipyards all over Europe, from France to Germany to Belgium and Italy, which being so small, will never try and impose themselves at an international level.

“As a result, I think that the EC is lacking a global vision, and has failed to understand that it should spend more time supporting the formation of these European groups instead of trying to make sure that there are small regional actors that have no market confidence.”

With a decision delayed and the market drained of the confidence it enjoyed just a short while ago, whether the criteria by which such deals are judged has changed remains to be seen. Approved or not, the European shipbuilding industry is likely to look quite different in the months ahead. 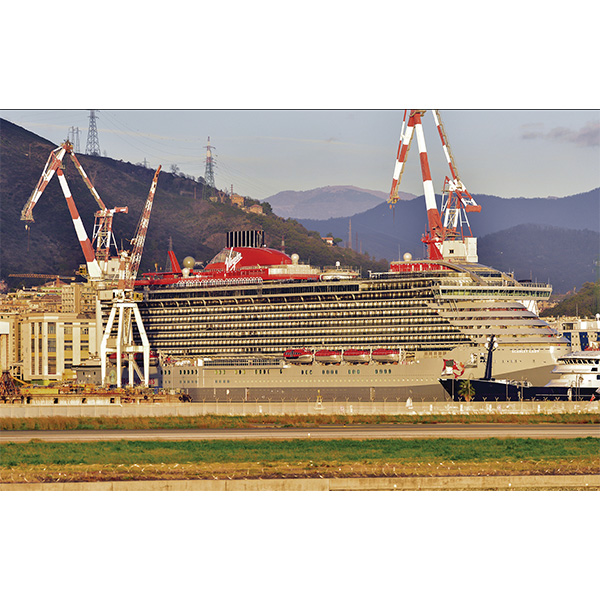 Virgin Voyages’ Scarlet Lady was built by Fincantieri, a world leader in the construction of cruise ships. 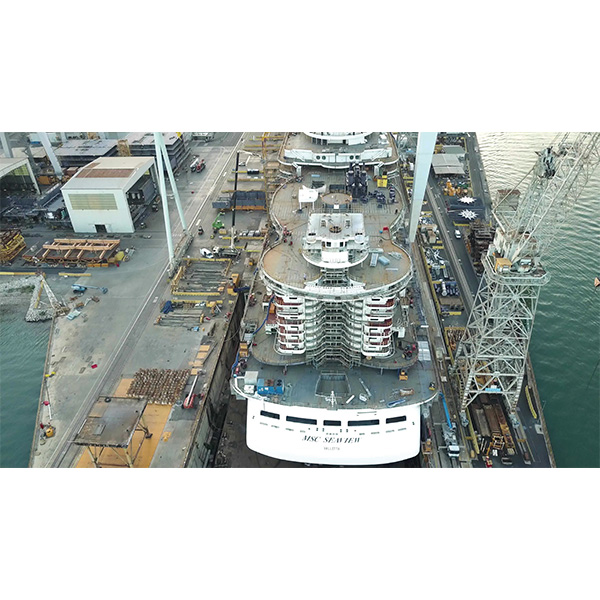 European leadership in cruise shipbuilding is being increasingly threatened by yards in Asia.
Post to: