Rise of the river cruise

Even a global pandemic wouldn’t stop river cruise lines from taking to the waterways of Europe in summer 2020. Elly Earls speaks to Marcus Leskovar, executive vice-president of Amadeus River Cruises, and Rudi Schreiner, co-founder and president of AmaWaterways, to find out how their experiences last year have prepared them to capitalise on pent-up demand from ocean cruisers in the months and years to come.

With its closed-in environments and focus on socialising, cruise travel was perhaps an unexpected industry to endure, even in a limited way, during a global pandemic. And yet the rivers of Europe were far from empty for much of last summer. While the AmaKristina continued to cruise up and down the Danube, 15-vessel river cruise line Amadeus managed to keep half of its fleet in business, with passengers enjoying itineraries that took them along the Rhine, Seine and Danube and into the famous wine regions of southern France.

Of course, it wasn’t entirely business as usual. Stringent new health and safety protocols were quickly conceived and implemented. Amadeus even brought in an epidemiologist to make sure they’d covered all bases, which included more frequent cleaning and disinfection, medical examinations and Covid tests for all members of the crew before a new departure, as well as the removal of any items that could be shared among passengers such as magazines, bar snacks and playing cards.

Meanwhile, AmaWaterways were only using the top two decks of the AmaKristina, as well as limiting the ship’s capacity from 160 to 100, moving the dining tables further apart and installing plexiglass dividers in the lounge. It also introduced pre-boarding health screenings, Covid tests for crew and daily temperature checks for everyone on board. In some ways, river cruise ships were surprisingly well prepared for a respiratory virus. Both lines already had ventilation systems that didn’t circulate air between different areas of the ship and sufficient space for passengers to keep their distance from one another. While guests had to wear masks when they couldn’t properly socially distance, they were able to remove them when sitting down in public areas.

“Looking at passenger feedback, they generally felt that it was a minimal intrusion on their cruise experience,” says Marcus Leskovar, executive vice-president of Amadeus River Cruises. “It still very much felt like a holiday experience; it wasn’t like staying on a floating hospital for a week.”

The biggest difference for passengers was the dining experience. The buffet, a mainstay of any cruise holiday, was out – at least in the traditional sense. It’s not quite the same when a waiter has to pick up your cheese and cold cuts for you. In addition, Amadeus passengers were no longer permitted to table hop and get to know different people each night. They were limited to their assigned seats.

According to Rudi Schreiner, co-founder and president of AmaWaterways, his line had been moving away from the buffet anyway. “We’d always had menus. You didn’t have to go to the buffet either for breakfast or lunch; you could also order off the menu, like you would at an elegant restaurant,” he explains.

The pandemic is set to accelerate that shift. Two Ama ships are currently being remodelled, on which the old buffet arrangements will be replaced with what Schreiner calls “action stations”, as well as more al fresco dining. “It may require more staff in the future, but the focus is going to be more on service,” he explains.

The path back to ‘normality’

For Leskovar, the 2020 season has provided a proof of concept. “We were able to keep all our passengers healthy and safe during our cruises,” he says. And while this is clearly a moving target, depending on factors including the emergence of new variants and the evolution of local travel restrictions, he believes the health and safety protocols developed last year will provide a good baseline for Amadeus to work from when cruise travel does fully resume.

Sensibly, he won’t be drawn into predictions. “I wouldn’t be sitting here if I knew,” he laughs. But he is certain of three things that need to happen first. “At the moment, everything is locked down; you couldn’t operate a hotdog stand,” he says. “The first step is that restrictions need to be lifted in a way where tourism is possible and where you can cross borders.”

Secondly, countries need to reach a certain level of stability, where authorities are not afraid that any spike or mass event will overwhelm the healthcare infrastructure. In other words, a certain percentage of the population need to be vaccinated. “That’s probably going to be achieved at some point this summer,” Leskovar hopes. Finally, there needs to be a clear path for leisure travellers to enter the EU and not immediately have to quarantine. The same goes for when they’re returning home. This could potentially be accomplished through digital vaccine passports, which are due to be rolled out in Estonia at the end of April.

“Will it be the same as it was for the last 20 years? I don’t think so,” Leskovar admits. “It’ll change and we all need to learn to adapt. But those are the steps we need to get moving again and start resuming a ‘normal’ situation.”

Demand is unlikely to be a problem. While summer bookings are predictably thin on the ground – nor are they being encouraged by Amadeus – there is plenty of interest for the latter part of the year, the majority of which comes from bookings that were initially made in 2020.

It’s a similar story for AmaWaterways, with strong bookings from September to December and 2022 looking “absolutely fantastic,” according to Schreiner. Of course, with 95% of their usual clientele coming from North America, this will be highly dependent on travel restrictions and the vaccination effort in the US. “I think we will hopefully get some good months of cruising in 2021, but mainly it will be the year to adapt,” he anticipates. “Then we’ll come back at full speed again in 2022.”

An influx of ocean cruisers

There are several reasons why river cruise lines are likely to be up and running again faster than their oceangoing counterparts. Not only are smaller vessels easier to manage, but also their heating and air conditioning systems don’t tend to cross-ventilate. And, if someone does fall ill with Covid on a river vessel, they can easily be transported to a facility that can properly care for them.

In addition, crew members are generally EU residents, whereas ocean cruise lines often bring in employees from all over the world, which involves navigating many more travel and flight restrictions.

“From the point of view of consumer mentality, perception and confidence, I think passengers will initially feel safer on a river ship, where you have a smaller crowd and more control, and are closer to infrastructure,” Leskovar says. Schreiner believes there will be an influx of ocean cruisers into the river cruising space, with its small but spacious vessels and increasingly high-end feel. “From that side, I think river cruising will boom in the next few years,” he predicts. “I’ve been doing this for 29 years now and when river cruising started, many people thought it was boring, slow and for old people. But once people went on a cruise, they realised how wonderful it is to be able to visit these small towns. It’s developed a lot over the years and ship design has also become much more luxurious.”

He’s referring at least in part to AmaWaterways’ newest vessel, the AmaMagna, which is twice the size of the line’s other ships and only holds about 20 more passengers. “It’s a magnificent experience,” he smiles, adding that from a tour operator perspective, it’s also easier to charter a river vessel than an ocean liner. “An agency can quickly come and charter a ship for 100 or 150 people, and we’re seeing a lot of that.”

Leskovar anticipates a continuation of the trends that were already underway before the pandemic, such as more active cruises and themed programmes focused around wine or food – activities that appeal to the industry’s increasingly youthful clientele. However, he’s cautious in his predictions on when it will get back up to full speed, or indeed when new vessels will be delivered or new itineraries introduced.

“We had plans for new destinations that right now we’re keeping on ice because it’s still unclear how things are going to develop. With shipyards backlogged, we can’t really plan new ships either. The industry will recover, but it’ll take a little longer than all of us hope,” he says.

Leskovar remembers when tourism organisations began to release studies suggesting it would take until 2023 or 2024 for a full recovery. “Initially, I was offended by that,” he laughs. “But the more you look at it, the clearer it becomes that it will take a few years to recover, especially with travellers that have to cross borders or fly long distances. When it comes back, though, it will come back strong.” 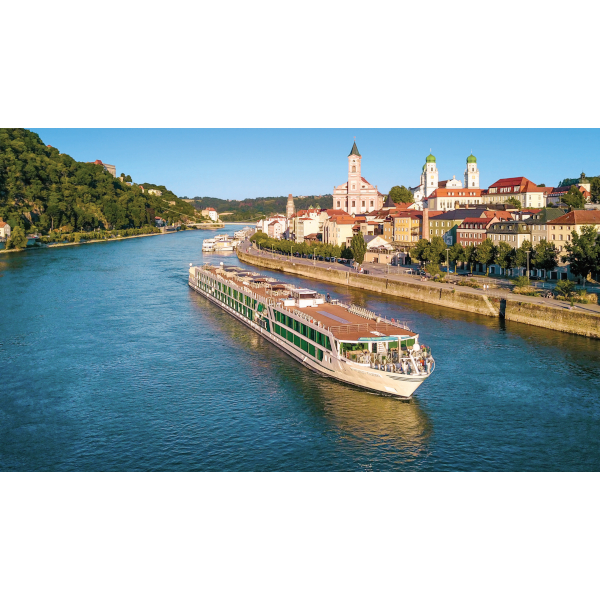 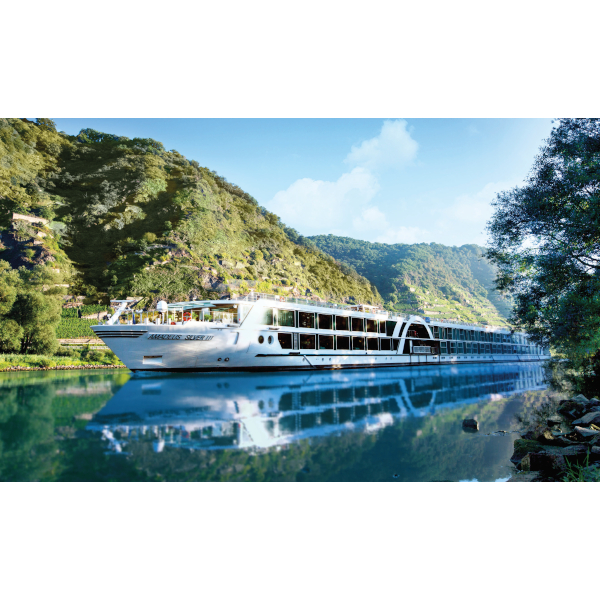 Amadeus operates cruises along the Rhine, Seine and Danube. 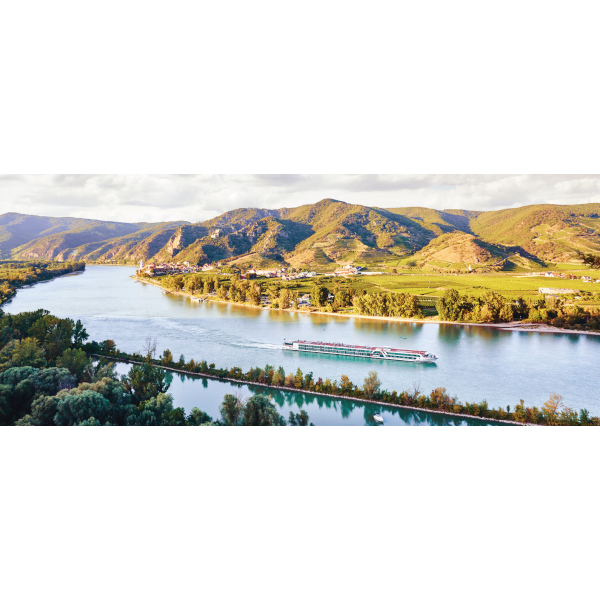 River cruises are likely to be up and running again faster than their oceangoing counterparts.
Post to: