In a global shipbuilding market characterised by uncertainty and overcapacity, shrinking margins, and increasingly stringent safety and environmental regulations, the cost of new-build projects tumbled in 2013 as established shipyards struggled with overcapacity and competed for new orders.

Having peaked in 2008, prices subsequently dipped by 30%, reports Seatrade Insider. Net growth is expected to continue at 5% a year in 2015-17, which equates to only around six to eight new deliveries per annum, and analysts are predicting little new capacity for the period 2014-16.

The most immediate effect of the slump, and the surge in cruise ship new builds that preceded it, has been a marked increase in refurbishment and upgrade projects as cruise operators turn to the retrofit market to revitalise their aging fleets and engage with a new generation of tech-savvy, environmentally aware cruise passengers by breathing new life into familiar brands.

"You simply have too much benchmarking from the new ships to leave the old ships as they are, and that goes for any brand in this industry," confirms Peter Fetten, senior vice-president - corporate ship refits at Carnival Corporation. "You can't have tired 20-year-old ships competing with brand new vessels in the same fleet without drawing attention to the details of the older one.

"When it comes to the megaships, there is no second-hand market. If you sell a ship like this, the competition is immediately there, and they have a major advantage in relation to investment costs. As a result, I think we will see a number of ships - especially the bigger vessels - going straight from a brand to a breaker. Better then to upgrade, even if it that requires substantial investment."

Carnival's recent upgrade project was one of the most ambitious in the history of the industry. The 17-year-old Carnival Destiny entered the Fincantieri shipyard in Italy in April 2013 and emerged two months later as the Carnival Sunshine; in the interim, 3,000 workers demolished much of the old ship and fitted it with all the features of Carnival's Funship 2.0 package, at a cost of $155 million.

"The concept is actually relatively simple," says Fetten. "The vessel becomes outdated and you can either perform simple maintenance or you can take the opportunity to refresh the ship's identity and the brand message, as we did on Carnival Sunshine. That means new dining, entertainment and floor concepts, and on a vessel with anywhere between 1,200-1,500 cabins, that takes time."

Time is a precious commodity in the commercial shipping industry, and for many shipyards around the world - especially those in established markets such as Europe - it is fast running out. Concerns around financing, volatile currency markets, and the inflated price of raw materials and labour have forced many shipbuilding companies to slash new-build prices in an effort to replenish their depleted order books.

At the tail end of 2012, Bloomberg reported that Hyundai Heavy Industries' order backlog was at a five-year low, global orders were at their slowest since 1999 and that the world's largest shipbuilder only had 18 months of work at its yards. The South Korean giant, which employs around 28,500 people, paid the price for not diversifying into the offshore energy sector as rapidly as its rivals.

The upshot for global cruise operators such as Carnival is that fewer and fewer shipyards have either the time or capacity to take on sporadic and costly turnkey retrofit projects, as Fetten explains.

"Shipyards in Europe and the US - and especially our yard in the Bahamas - are always evolving, but, for our purposes, that evolution is not positive because the repair and maintenance yards are getting smaller and smaller, and the managerial capabilities of those yards are reduced since we are not a constant customer," he says.

"We are time-conscious when it comes to refurbishments, as every week a ship is out of service is a week of lost revenue. Unfortunately, the shipyards cannot afford to have 20-40 project managers waiting for us to book a $150-million project and then we don't come back for two years - their business model simply doesn't support that.

"As a result, many of our major revitalisation and retrofit projects are project-managed by our own teams, while the shipyards carry out the baseline work. There are exceptions, such as Fincantieri, which sometimes takes on turnkey jobs, but often projects that have a positive return on investment when completed in a certain time frame become unprofitable if they take too long," he adds.

Like its rival operators, Carnival is looking to identify and develop itineraries in emerging markets such as Asia-Pacific, and South and Central America. Does the company's expanding geographical footprint constitute a challenge when it comes to finding the right refurbishment partners?

"I think we will see a number of ships - especially the bigger vessels - going straight from a brand to a breaker."

"In Australia, we are concerned, because the commercial shipyard in Brisbane shut down and now there is only Sydney available, which makes it pretty difficult," admits Fetten. "The only solution is to carefully manage the dry-docking itineraries and schedule the ship to go to Singapore, where we partner with dedicated project teams at Sembawang Shipyard.

"With smaller ships it is no problem, we can go to Sydney, but with larger vessels we have to go to Singapore, because it is a maritime centre, and the response time and capabilities are there. This is a development that has taken place in the last three to five years; that's how long it can take to get acquainted with certain shipyard groups."

Refits and renovations are no longer simply restricted to cosmetic considerations such as hull cleaning, interior upgrades and new venues. The modern tech-savvy cruise passenger demands a raft of new amenities and services. One example is Royal Caribbean's ongoing ship revitalisation programme, which aims to replicate amenities from its Oasis-class vessels fleet-wide. 2013's most high-profile recipient, Legend of the Seas, re-entered service in early February, complete with updated staterooms and bow-to-stern Wi-Fi following a $50-million refurbishment in Singapore.

Similarly, safety has been propelled to the head of the industry agenda in the wake of the Costa Concordia tragedy in 2012 and a spate of high-profile engine room fires last year, the most notable being aboard the Carnival Triumph in February. In response, the Carnival Cruise Lines subsidiary rolled out an unprecedented $300-million upgrade programme aimed at boosting emergency power capabilities, implementing new fire safety technology and improving the level of operating redundancies - back up technology designed to replicate key engineering systems - across its 24-strong fleet. The company is also investing in leading-edge fire prevention, detection and suppression systems, and installing a second emergency diesel generator on each of its ships that will, if necessary, maintain guest services.

"When it comes to refurbishment, safety enhancements are a priority," says Fetten. "Technical upgrades, depending on whether or not you alter the capacity of the ship, account for 25-40% of the project costs and the public-facing refurbishments between 55-75%. For example, advances in safety and bridge automation technology are not immediately obvious during revitalisation programmes, but a lot of these upgrades are going on."

In addition to safety legislation, environmental restrictions on emissions from cruise ships have been tightened. The most recent amendments to the International Maritime Organisation's (IMO) 'MARPOL Annex VI' regulations will compel cruise lines to change to a fuel with a sulphur content of no more than 0.1% for operations in designated emission-control areas.

By 2020, all cruise ships must burn fuel with a sulphur limit of 0.5%, regardless of where in the world they are operating, and considerable investment is required to bring sulphur levels down from the current standard of 1%. Fetten points to the Sunshine as an example of Carnival's commitment to developing sustainable vessels capable of complying with increasingly stringent legislation.

"Carnival Sunshine has undergone a lot of environmental upgrades, including implementing a plan to produce our own reliable water supply," says Fetten. "We have developed groundbreaking 'scrubber' technology, and we are installing scrubbers on many of our ships throughout the Carnival family to comply with the EPA and IMO rules governing low-sulphur fuels and related emissions that come into force in 2015.

"We are also installing new chillers to enhance the efficiency and reduce the CO2 footprint of our air-conditioning systems, the biggest consumers of energy. So there are numerous initiatives, such as this, that are introduced at times like these when the ship is out of service for some time."

The precipitous drop in the cost of new builds across the globe has coincided with increased demand for upgrade and refurbishment projects as shipyards chase new business and cruise operators look to upgrade aging fleets, revitalise brand and comply with safety and environmental regulations.

Against this backdrop, does Fetten think that the cruise ship refurbishment and upgrade market will remain buoyant at the expense of new builds?

"From the new-build side, everything runs in relation to branding - every brand has their own ideas and growth projections - but more important are brand enhancements," he says. "A ship that was designed or built 15-18 years ago may not be part of the philosophy today, so of course every brand would like to adjust that ship to a new brand-vision for a reasonable amount of money.

"Here's my wish - that shipyards in Europe could take on bigger turnkey jobs, because then we wouldn't need to do so many refurbishment projects in a given year. These projects tend to have a minimum preparation time of 12-18 months, and if you occupy up to 20 project managers on each project, you simply can't do a hundred of them each year, which we might need to do. When you consider the average age of some of our ships, then you can see how much work we have in front of us." 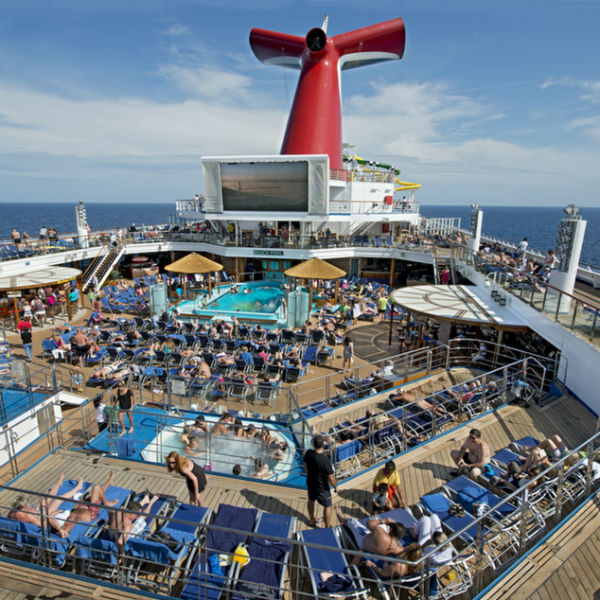 The lido on board Carnival Sunshine. 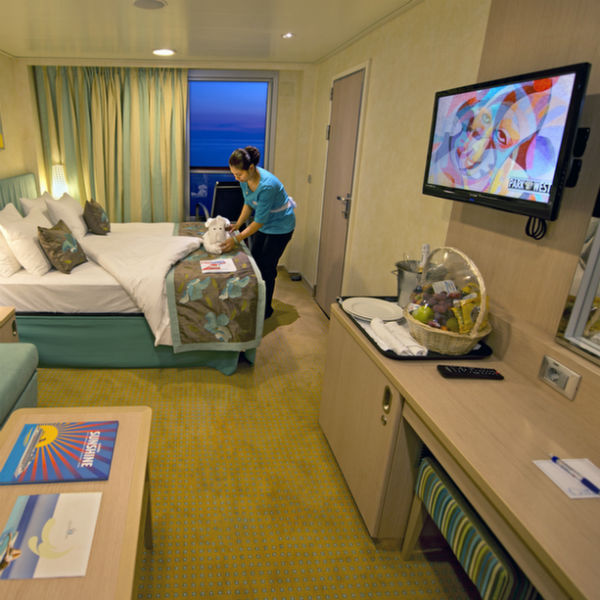 With more tech-savvy customers, even cabins need to be considered for upgrades.
Post to: