The launch of the world’s first hybrid electric–powered expedition ship, MS Roald Amundsen, by Hurtigruten in 2019 ushered in a new era for the industry. A fire and explosion on board the Norwegian ferry Ytterøyningen in October of that year, however, raised questions about the safety of energy storage systems. As the market for marine batteries expands, Jim Banks talks to Andreas Ullrich from Bureau Veritas, DNV GL’s Arnstein Eknes and Hans Eiving Siewers about how hybrid solutions and concerns about safety will shape the future.

In 2019, the cruise industry took a great step forward with the launch of the expedition cruise ship MS Roald Amundsen by Norwegian cruise line Hurtigruten. The vessel, which would be the first hybrid electric vessel to traverse the North-West Passage, would become a beacon for the industry’s move towards hybrid propulsion systems.

The batteries working in support of the vessel’s engines would result in greener and more efficient journeys, reducing emissions by up to 20%.

Indeed, she would set a precedent in the summer of 2019, when she became the world’s first cruise ship to sail purely on battery power.

“Hybrid and battery power is music to the ears of the environmentally conscious public and it further supports green development,” notes Hans Eiving Siewers, head of the passenger ships division at DNV GL. “The branding impact is significant,” adds Arnstein Eknes, who leads DNV GL’s Special Ships group. “It is attractive to be on a high-tech vessel. Hybrid enables you to use fuel more efficiently, so fuel costs decrease, emissions decrease and less maintenance is required in the engine area. But batteries are costly to install, so you need a good balance sheet.”

The technology was making inroads in the automotive and ferry markets, but the launch of the Roald Amundsen brought it into the cruise market for the first time, spurring interest among other operators and the companies developing marine battery technology.

“In our view, any newly delivered hybrid and/or fully electric powered cruise or ro-ro passenger ship has a significant impact on the development of this technology,” says Andreas Ullrich, who leads the passenger ship and ferry sector at testing, inspection and certification services provider Bureau Veritas. “It clearly shows the commitment of all stakeholders in this industry to invest in this technology and, by doing so, to drive future development.”

“I believe all ships in the future will have a battery connected to the on-board power system,” says Eknes. “In cars, the role of the battery has expanded to make life easier for the engine. In the marine sector, everyone is assessing how to use batteries, which allows quieter and more efficient operations.”

The rising tide of hybrid technology

The hybrid and electric portion of the marine industry market will undoubtedly grow in years to come. Some estimates suggest annual growth of almost 50% between 2020 and 2025. New vessel designs will increasingly incorporate battery capacity and there is a growing trend among shipowners for retrofitting vessels with batteries and electric motors to improve the overall efficiency of propulsion systems or, in the cruise sector, to handle peak energy demand from guest activities.

“Local regulations will also play a role,” notes Siewers. “In Norway, there is a move to have zero emissions in the fjords, so we may see vessels using a big battery pack to access certain destinations.” The availability of battery power, the cost – including installation and maintenance – and the weight of the batteries themselves will all influence investment decisions. The signs, however, are positive, as in recent years there have been huge improvements in both battery technology and energy storage systems in terms of power, weight, cost, reliability and safety. Regulation, may, however, be the most potent factor, particularly as it focuses increasingly on factors such as environmental performance.

“Especially in the ferry segment, we see a clear trend towards hybrid and/or battery-driven ships, mostly on short routes,” Ullrich remarks. “Good examples are the two ferries delivered earlier this year by Damen SY to BC Ferries in British Columbia, with more under construction, and the cruise vessel for Ponant under construction at Vard Norway. She will be the first LNG hybrid cruise ship going beyond current environmental regulations.”

Ponant’s new vessel, Le Commandant Charcot, is scheduled to enter service in early 2021. Using a propulsion system fuelled by liquified natural gas (LNG), it could open up previously uncharted regions of the Arctic, with the line intending it to be the first passenger ship to reach the North Pole.

“Global and local environmental regulations clearly foster clean energy usage,” Ullrich continues. “By using electric hybrid propulsion, harmful emissions will be reduced or, in the case of fully electric vessels, eliminated as long as green energy is used for charging.”

As with any technology, the batteries used in cruise ships and ferries have some limitations. There is always a ceiling on the level of available power, though this is constantly rising, and operators will always want the charging time for batteries or energy storage systems (ESS) to be shorter.

“One solution might be to install decentralised ESS in several parts of the ship, so that at least the hotel load can be covered,” says Ullrich. “In order to see a large cruise ship powered by batteries or ESS, the available power will need to increase significantly and battery lifetime will need to increase, while weight and price will need to reduce. Overall, the key is a proper power management system.”

Turning the spotlight on safety

So far, the story of hybrid propulsion in the cruise industry has been one of anticipation, excitement and adventure into uncharted territory. In October 2019, however, attention turned to the most important of all priorities – safety – due to a fire and explosion on board the hybrid-powered Norwegian ferry Ytterøyningen. Though the cause was initially unclear, it later emerged that a fire has broken out in the vessel’s battery compartment. The initial fire was brought under control quickly with relatively little harm to passengers. The following morning, however, a powerful explosion occurred in the battery compartment.

Several theories have been put forward about the cause of the explosion, though all are still speculation rather than fact. Whatever the cause of the fire and however minimal the danger to human life, the incident does merit close attention and an in-depth assessment of safety issues arising from the battery technology that will be a fundamental part of the industry’s move towards a low-carbon future.

“The fire is a good reminder that all technologies can fail,” says Eknes. “We need to regulate and mitigate the risks as best we can. The fire showed the risks and highlighted the importance of monitoring what can go wrong. It also showed that a diesel fire and lithium fire behave differently, so you need to train people in how to cool the fire and stop it propagating.”

“Batteries can, in very rare circumstances, produce explosive gases and catch fire,” adds Siewers. “It is a new technology and we need to understand the risks. The rules for batteries are constantly being updated and developments in the technology, such as solid-state batteries, would improve safety, and that development is being led by the automotive and tech industries.”

The automotive sector is further along in the journey towards an electric future and, although the lithium ion batteries that power electric vehicles are not risk-free, they are widely seen as safer than their conventional counterparts. For example, electric car manufacturer Tesla suggests that petrol cars are 11 times more likely to be involved in a fire than electric cars.

The Ytterøyningen fire will focus minds on potential safety risks, which could ensure not only a safer future for electric and hybrid propulsion in the cruise and ferry industry, but also a more successful one. Every lesson learned is a step forward in the development of the fundamental technology, and the journey to replace conventional propulsion will be a long, slow and steady one.

“Development will depend heavily on the advance of technology, reliability and cost,” says Ullrich. “In my view, conventional engines will be used on large cruise ships for a long time using alternative fuels or they will be combined with batteries, fuel cells, sails, wind rotors or other technologies yet to be developed.”

Reduction in emissions from the hybrid electric batteries working in the Roald Amundsen’s engines.
Hurtigruten

The potential annual growth of the hybrid and electric portion of the marine industry market between 2020 and 2025. Research and Markets 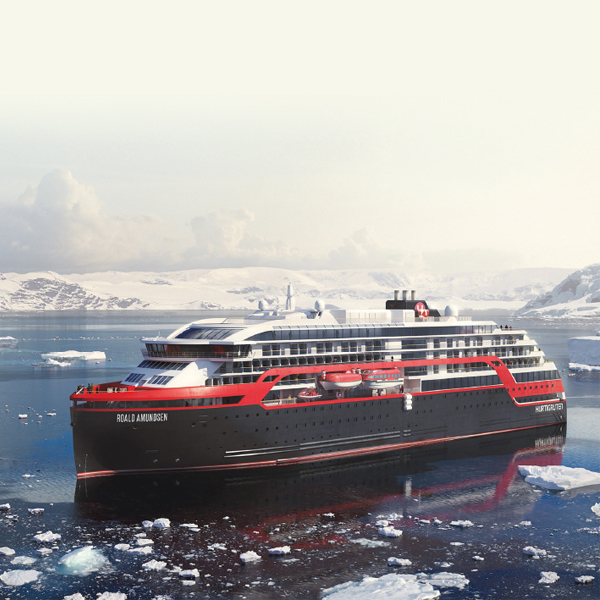 The Roald Amundsen, launched by Hurtigruten in 2019, was the first hybrid electricpowered vessel in the cruise industry. Image Credit: Hurtigruten 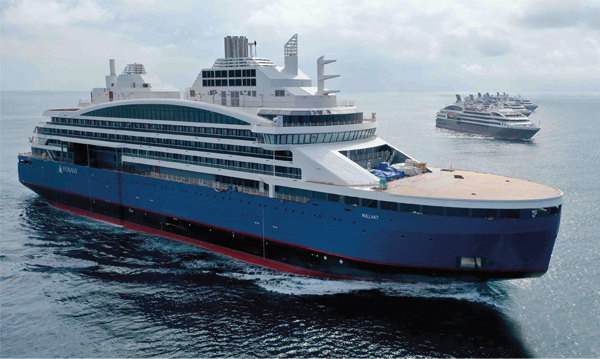 Popant’s Le Commandant Charcot uses a propulsion system powered by LNG, and is intended to be the first passenger ship to reach the North Pole. Image Credit: Popant
Post to: