Pearl of the Mediterranean: the new AIDA cruise ship

After a protracted construction period, AIDA Cruises’ new ship, AIDAperla, is finally on the water. Boasting a new dual-fuel engine room, slender hull and foil-covered domes, the vessel was worth the wait, as Christian Schönrock, the group’s director of new builds, tells Ross Davies.

“Size creates space, and space creates individuality,” says Christian Schönrock, director of new builds at AIDA Cruises. He’s speaking to World Cruise Industry Review over the phone from his office in Germany. It’s an epigram that neatly encapsulates the design and construction of the latest addition to AIDA’s growing fleet of vessels, AIDAperla.

Christened in June 2017, AIDAperla is the Costa-owned brand’s 12th ship, following the introduction of sister vessel AIDAprima last year. Its impressive measurements include 125,000 gross tonnage, a length of 300.0m and width of 37.6m. The ship’s total capacity encompasses 3,300 passengers and 900 crew members.

As is often the case with builds of such size, AIDAperla’s origins can be traced back some way – almost a decade, in fact. “It really goes back to 2009, when we were starting to think about the future of cruising, and what the future of AIDA would look like,” says Schönrock. “I know everyone always talks about design starting from a blank canvas but, in this instance, it really was the case. It’s taken a while, but we put everything underneath the microscope and developed a completely new concept.”

A fundamental feature of the ‘future of cruising’ was – and still is – efficient fuel consumption and minimising environmental impact. AIDAperla has dual fuel engines, including a liquefied natural gas (LNG) option that can be provided portside. On the vessel’s introductory tour through the Mediterranean in June 2017 ahead of its christening in Palma de Mallorca, AIDAperla was supplied with LNG in Barcelona, where AIDA has struck a deal with the port authority to use its fuel facilities. At the time of writing, the cruise line is said to be in discussions with other ports in the region for similar arrangements, as it looks to dial down its emissions.

“We are one of the first groups to gravitate towards LNG, but there is no tank on board to store the fuel. So it has to be fed from the outside,” says Schönrock. In 2011, AIDA’s dual-fuel AIDAsol was the first vessel to use LNG, although only in port. Another notable green feature of the engine room is the incorporation of the Mitsubishi air lubrication system. The system covers the underside of the vessel with a carpet of fine air bubbles. These help to reduce the friction between the hull and water, saving energy and reducing fuel consumption by 7%, according to AIDA’s estimates. “We are the first commercial ship to have this air lubrication system installed,” says Schönrock. “It works very well.”

Both AIDAperla and AIDAprima were built by Mitsubishi Heavy Industries at its shipyard in Nagasaki, Japan. AIDA and Mitsubishi share a history dating back to the last decade, when the Japanese group took orders in 2004 from P&O Princess Cruises – AIDA’s previous owner before its acquisition by Carnival Group – for the Diamond Princess and Sapphire Princess. When it came to tender responses for AIDAperla’s construction, Mitsubishi was first in line, says Schönrock, forking out $650 million in 2011 for the privilege.

“The team at Mitsubishi is not new to shipbuilding – or to us, for that matter – so the team took part in a lot of bidding processes to get the project,” he says. “It was a good fit for Mitsubishi, because, as an owner, we were able to give a clear idea of what we wanted. The company fought really hard to work with us.”

But the building process was not without its problems. Due to delays at the shipyard, completion of both AIDAprima and AIDAperla was a year overdue – taking three years in total from start to finish. Such was the holdup that in 2016, Mitsubishi CEO Shunichi Miyanaga was obliged to issue a galling public statement revealing the group had struggled with cost overruns and accrued losses exceeding $1.7 billion.

According to Schönrock, Mitsubishi drastically misjudged the job in hand: giving life to an entirely new prototype. This caused the planning process to overrun, and from there the group was forced to play catch-up.

“This ship was a real prototype with demanding specifications,” he says. “The shipyard underestimated the complexity of what was a super-modern project, and also underestimated the amount of time needed to develop the basic design for such a ship.

“Also, during construction, they realised that while they had done good jobs in the past, this was a real challenge. The experience of building a ship ten years ago doesn’t really compare to building a ship these days. It’s more complex. They weren’t ready.”

While the delay was “not ideal”, AIDA has ended up with “a really great product”, Schönrock says of the ship, which finally arrived in European waters in May 2017.

In the engine room, AIDAperla makes use of a diesel-electric propulsion system, integrating three Caterpillar M 43 C diesel units and a Caterpillar M 46 DF dual-fuel marine engine. The ship can travel at speeds of up to 21.5kt.

“For all the technical systems, the focus is on energy efficiency,” explains Schönrock. “So all systems are operated with frequency-controlled electric motors. We have analysis and support systems in order to better measure our consumption. For the air conditioning, we went through each and every system with Novenco, and discussed how we could improve them.”

AIDAperla is also conspicuous for its slender hull, which includes a perpendicular 261m-long bow. The hull was developed by Carnival, Mitsubishi and the Hamburg Shipbuilding Research Institute.

The ship’s design was undertaken by Partner Ship Design (PSD). Operating out of Hamburg, Germany, and run by senior partners Kai Bunge and Siegfried Schindler, PSD has worked with AIDA for over a decade on other vessels, so “instinctively knew exactly what we were after”, according to Schönrock.

“I’d say the whole ship is an architectural innovation,” Schönrock says. “Right from the beginning, we’ve focused on having a close relationship with our architects, as we do with all our partners and clients. We developed ideas from scratch, really, directly together with Kai and Siegfried. So from the beginning, we were discussing with them the idea of optimising space. For this, we took inspiration from our current fleet, but we made a lot of changes.”

Schönrock cites the example of the public deck, situated amidships, and the introduction of more balcony cabins – AIDAperla has 1,643 cabins in total, spread over 18 decks. There’s an upper deck with several enclosed areas, as well as two pool areas covered by foil domes, allowing passengers the opportunity to take a dip in colder weather.

“With the upper deck, we have really created an outer landscape, alternating between indoors and outdoors,” says Schönrock. “Using foil domes instead of glass for the pool areas is also a world first. The flexibility of foil is also fantastic – you can create completely different rooms.”

It might have taken a little longer than hoped for AIDAperla to get past the drawing board at Mitsubishi’s shipyard. But with the new build having taken its maiden tour of the western Mediterranean, it appears to have been worth the wait.

“It’s taken a lot to design and to develop this product,” says Schönrock. “But we are very proud that it is working as we expected. It’s one thing designing something but it’s another thing for it to operate and work well. And, best of all, the passengers appreciate it.” 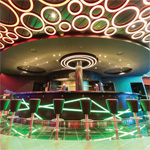 inside one of AIDAperla’s bars. 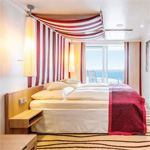 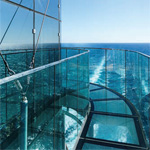 The ship features glass walkways suspended over the ocean. 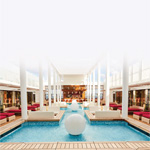 The AIDAperla is the latest addition to AIDA Cruises’ fleet of ships. 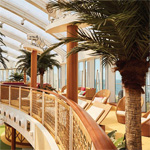 The tropical pool lounge is under a glass dome. 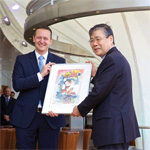 Representatives from Mitsubishi handed over the ship to AIDA executives in April 2017.
Post to: