The Caribbean is the epicentre of the global cruise industry, with the region predicted to host over a third of all ships in 2019. That’s despite the high-profile natural disasters that struck some islands in 2017. As strong as the recovery has been, some signs point to a far less rosy future. Tim Gunn assesses the region’s ability to continue its ongoing boom.

Ask any seaweed connoisseur – there’s nothing like sargassum. Once thought to spawn in Atlantis, certain variants – those that crisscross the Sargasso Sea like a silly string nervous system – can live and reproduce without ever coming into contact with the sea floor. Sailors feared the Bermuda Triangle was colonised by deadly, ship-devouring banks of the stuff, but the webs that do exist are actually teeming ecosystems; places where dolphins play, turtles mature and camouflaged sargassum fish wriggle along underwater grapevines.

There was a time when the wandering lives of S. natans and S. fluitans didn’t often stretch beyond their eponymous portion of the North Atlantic, held there by the same spiral of currents that blithely spun the local garbage patch.

These solid, beach-hugging clouds, which release noxious hydrogen sulphide gas as they decompose on shore, have rolled in from January to September almost every year since, destroying everything from computers to catamarans in the process. Last year was the worst yet. Doctors in Martinique reported more than 8,000 cases of acute exposure, three of which ended up in intensive care; as far west as Solidaridad, Mexico, the mayor-elect estimated that the algae had dragged tourism down to 65% of 2017 levels; Barbados was moved to declare a national emergency.

Scientists have traced the rogue sargassum to waters off Brazil, but no-one knows why it’s spawning there. And while Caribbean islands are clearly feeling the impact, it’s hard to tell how that translates to the companies that weave itineraries between them.

In 2015, Sir Hilary Beckles, vice-chancellor of the University of the West Indies, called the deluge “an international crisis” and “the greatest single threat to the Caribbean economy”. The cruise industry is yet to mention it.

Presently, that silence seems to be working. According to the 2019 ‘Cruise Industry News Annual Report’, the Caribbean market is forecast to welcome another 500,000 passengers in 2019, compared to 2018, taking the overall number past 10 million – more than any other destination. As it is already the largest, most developed cruise destination on the planet, this only translates to a 5% increase, but as Ryan Skeete, acting director of research at the Caribbean Tourism Organisation (CTO), says, “Evidence suggests that Caribbean tourism is on the upswing.”

St Lucia’s northern Cas-en-Bas beach is not, however. Ten years ago, it was Amy Winehouse’s favourite place in the world. “Being in England for her was like being in jail,” Marjorie Lambert, the local restaurateur dubbed the singer’s ‘Caribbean mum’ told the St Lucia Star. “In St Lucia, she was free, happy; kissing and hugging everyone.”

The year she died, the sargassum came. Fewer and fewer holidaymakers visited Cas-en-Bas. After four years of employing heavy machinery to keep the area relatively clear, the beachside Cotton Bay resort closed. The windswept destination was left more reliant on cruise tourism than ever. Unfortunately, cruise ships don’t visit the Caribbean for its seaweed piles. The horse-riding and buggy excursions that used to centre on Cas-en-Bas beach now follow harder, hotter routes that keep the sargassum out of sight.

“Before the seaweed, everyone would come to enjoy the beach atmosphere, but now visiting locals and tourists barely stick around for more than a few minutes,” Lambert recently said. “There are days when nothing comes in. But we still have to pay our bills. It’s not easy.”

Even without its wall of dead weeds, Cas-en-Bas looks very different from the place Amy Winehouse left. Cotton Bay’s tractors have been replaced by a few workmen with shovels and bin bags. It’s less destructive, but without the right tools and training, each vain scoop of seaweed brings a bit more sand with it. The beach itself is beginning to disappear.

To Cuban writer Antonio Benítez-Rojo, the Caribbean has “neither a boundary nor a centre”. It’s the one place where an English singer could feel like she was finding her family for the first time, inexplicable Brazilian flora could choke off thousands of livelihoods and the population of some islands could more than double as people temporarily disembark ships during peak cruise season. As globalisation’s nursery, the Caribbean has its own definition of local. It’s always been a good fit for the cruise industry.

500,000
passengers The predicted increase in passenger numbers to the Caribbean in 2019.
Cruise Industry News Annual Report

This connection was perhaps never more in evidence than in the aftermath of the 2017 hurricane season. Four months after Puerto Rico was rocked by Hurricanes Irma and Maria, its tourism industry had made a remarkable recovery. Florida-Caribbean Cruise Association (FCCA) president Michelle Paige credited it to the collaborative work of the FCCA, its member lines and government bodies in “assisting the destination and its people in a time of need – serving as a true testament of our partnership and a model for future recovery efforts”.

It’s a far cry from the industry’s response to the Haitian earthquake of 2010, when Royal Caribbean was lambasted for continuing cruises to Labadee, a private island just 60 miles from the wrecked port and mass graves of Port-au-Prince.

You could have no hurricanes for many years, but if there’s a recession it’s not going to matter that much.
C Patrick Scholes, SunTrust Robinson

Indeed, in the aftermath of the hurricanes, Royal Caribbean worked with the government of the US Virgin Islands to rapidly repair and reopen the devastated Magens Bay, one of the most popular beaches on St Thomas. Whereas eight years earlier the company had donated deckchairs and sunloungers in a misguided effort to protect its brand, at Magens Bay it commissioned an artwork that used wood torn up by the storms to celebrate St Thomas’ history and ability to overcome adversity. That proved prescient. By the fourth quarter of 2018, the US Virgin Islands and other severely hurricane-damaged areas were registering triple-digit increases in tourist visits over previous months, according to CTO figures.

For all that positivity, it’s worth noting that cruise lines largely kept to the same script on both occasions. Royal Caribbean vice-chairman Peter Goldstein was scorned in 2011 for writing, “People enjoying themselves is what we do; people enjoying themselves in Labadee helps with relief”. In 2018, Carnival CEO Arnold Donald faced no pushback for stating that cruising was a “catalyst for an entire island’s recovery”, before highlighting the operator’s pride at how quickly its service returned to normal.

Of course, the earthquake and hurricanes were different events in different places, but it’s clear that the way the cruise industry has intertwined with the wider Caribbean system in the past decade has helped to make its arguments more relevant.

80%
The amount of the Bahamas that would be underwater if global temperatures increased by just 2°C – in line with the 2015 Paris Climate Agreement.

C Patrick Scholes, a Wall Street analyst specialising in the leisure sector at SunTrust Robinson, does not see that trend reversing. “I think the islands and the cruise lines have to stay entwined,” he says. “Over the years, we’ve seen them become more entwined because there are simply more cruise ships out there. It’s rare that you ever hear an island say, ‘We don’t want any more.’”

If this arrangement helps Caribbean islands recover from storms that start in the Atlantic, it leaves them more exposed to those coming the other way. In Scholes’ view, the economic health of US consumers is far and away the most important variable impacting cruise tourism in the region. He points to the fact that the most destructive season on record only resulted in a total drop in Caribbean tourism of 2.3%, meaningfully less than the 3–4% observers had feared. “You could have no hurricanes for many years,” Scholes explains, “but if there’s a recession it’s not going to matter that much.”

CTO’s Skeete puts it aptly, the “significant headwinds” he fears are those that might be blown by Brexit and the trade war between the US and China, not the seasonal storms that change a few weeks’ itineraries.

Going further, Scholes believes that hurricanes can’t damage the cruise industry as much as PR missteps and customer dissatisfaction. There’s good news on that front. “The cruise lines have definitely gained a lot of favourability in consumers’ minds over the past five years,” he says. “They just need to keep doing that.” The best way for brands to weather any coming economic storms is to deliver “a positive experience – a positive memory – at good value”. At the moment, that means avoiding the seaweed.

However it might look to the world’s media, one of the most consistent ways operators can delight passengers is by taking them to private islands. Royal Caribbean and MSC Cruises will be opening new ones in the Bahamas this year, hoping to make the most of the country’s proximity to Florida, which already helps it account for a massive 17.1% of the region’s total visits in 2017. At present, 75% of foreign visitors to the Bahamas arrive on cruise ships, but according to some estimates they contribute as little as 11% of tourist spending. In a bid to change that, the government recently entered into negotiations with Global Ports Holdings for a $250 million publicprivate redevelopment of Nassau’s main cruise port terminal. No Bahamian will deny that the port area, subject of numerous travel advisories, has little to recommend it to cruise visitors, but nor will they miss the irony of huge multinationals investing in different parts of the country so that it can compete, essentially, against itself.

Only months before, St Lucian Prime Minister Allen Chastanet reminded cruise executives at the FCCA conference in Puerto Rico that though they may be consistently breaking records, their state partners were struggling with the cost of keeping up. That’s not to cast them as powerless – the Nassau port redevelopment aims to support Bahamian investors with a new funding model that also ensures the country retains a controlling stake. Similarly, the tourism ministry recently opted to discontinue cruise subsidies and redirect funds to fostering cultural experiences that can’t be replicated on private islands.

Even so, Chastanet also noted that the 2015 Paris Climate Agreement goal to limit climate change to an average global temperature increase of 2°C would leave 80% of the Bahamas underwater. “What can we do to build the resilience to make sure we’ll be around – and you have a destination to sell?” he asked.

Reflecting on the past hurricane season in a 2018 media call, Goldstein said, “As leaders, we have a social responsibility to assist with the fabric of the community in the Caribbean. That recognition existed before, but a year ago, it was amplified and augmented; there is a recognition of how important we are to each other.”

This will be tested by the environmental challenges ahead. The hurricanes and the sargassum are just a foreshadowing of what’s to come. No amount of industry growth will keep the seas from rising. 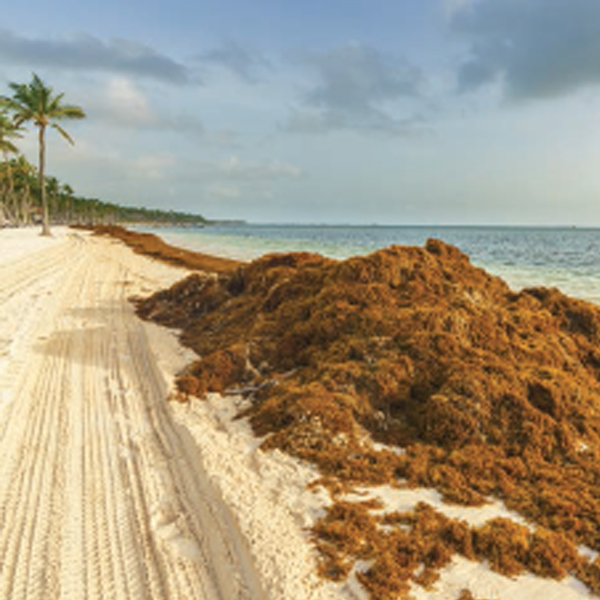 Sargassum seaweeds washed up on the coast of the Dominican Republic. 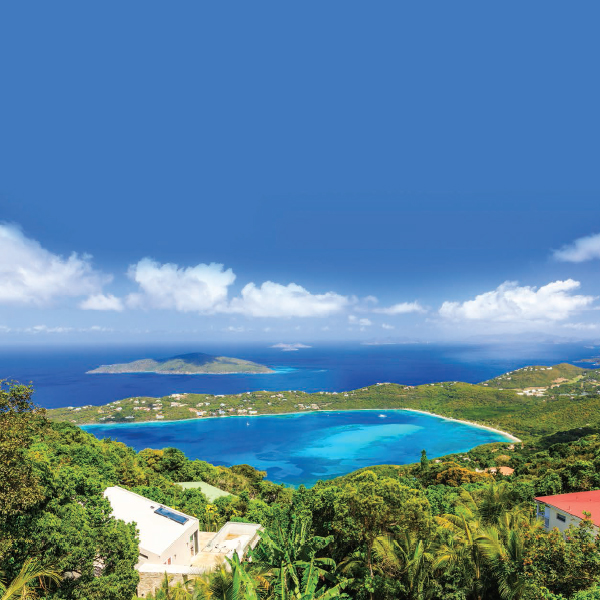 Magens Bay, on St Thomas, which Royal Caribbean helped to repair after it was devastated by hurricanes. 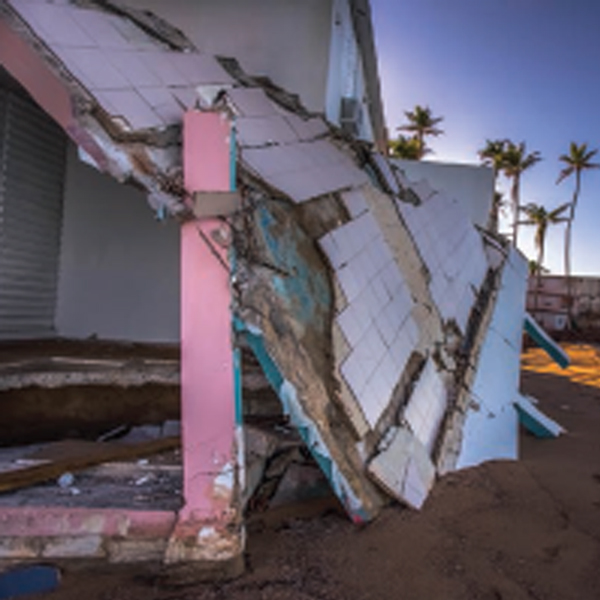 Below: A collapsed beach house in Puerto Rico after it was hit by Hurricane Maria.
Post to: