For the past few years, the slogan of the industry seems to have been ‘a cruise for everyone’: bigger ships, more activities and diversified brands present guests with a variety of choices at every step. Meanwhile, those passengers are becoming used to an online world in which there is no need to choose. Tracked via cookies, ‘likes’ and account histories, they operate increasingly in an optimised domain: search engines predict their questions, browsers remember their credit cards and stores already know what they’re after. So why can’t a cruise – billed as ultimate relaxation – do the same?

Optimising cruising on an individual level was the goal of Carnival Corporation as it developed the One Cruise Experience Access Network (Ocean) platform, announced at CES 2017 in January and slated to make its debut on Regal Princess in November 2017. The platform includes original media content and an expanded itinerary, but the standout feature is the wearable Ocean Medallion and its accompanying Ocean Compass software, developed by chief customer experience officer John Padgett, and vice-president of design and technology Michael Jungen. About the size of a quarter and weighing 1.8oz, the silvery Medallion’s most obvious draw is that it doesn’t need to be tapped on a sensor. Its near-field communication (NFC) and Bluetooth low-energy (BLE) technology can unlock a cabin or pay for a purchase just by coming within range of one of the 650 readers and 7,000 sensors installed throughout the ship. In Padgett’s opinion, this defines the attitude behind the entire endeavour.

“The most valuable thing in the world to all guests is time. The ultimate experience is something that requires nothing of the guest,” he explains. “Maybe to some people, eliminating that action is small, but to us, it’s about the philosophy of committing to the ultimate in guest experience.”

The Medallions are waterproof, engraved with each guest’s name, ship and sailing date, and can be worn on a keychain, necklace or wristband. They will be complimentary for every guest booking a cruise on a Medallion-enabled ship. For the moment, that means Princess ships fitted with the necessary sensors, readers, interactive portals and Wi-Fi upgrades. According to Carnival, Princess president Jan Swartz was the first to raise her hand, but the Ocean platform will eventually be rolled out to all its brands.

Up close and personal

The potential of wearable technology to replace the NFC card system has been identified before, most notably in Royal Caribbean’s WOW Bands, with RFIDenabled wristbands that function as room keys and payment cards. After an initial complimentary release, these now incur a charge of $4.95 to all except suite guests. Padgett and Jungen, in their previous roles, created the similar but more advanced MagicBand system for Walt Disney Parks and Resorts, which ultimately caught the eye of Carnival CEO Arnold Donald.

The WOW Bands were linked to payment and basic ID information, but that was all. The Medallions, however, connect to detailed guest profiles through the Ocean Compass software. Guests can log in before departure to enter their payment details, basic personal information and a photo of their passport, as well as their preferences for food, activities and shore excursions. This lets them skip the queue and board the ship as soon as they arrive – though they will still be greeted face-to-face by crew with Compass-enabled handheld devices. Once done, they are deemed ‘Ocean ready’ for all subsequent Medallion-class cruises.

Based on passengers’ profiles, Compass will suggest things to do and ways to improve their experience through the Compass app on their own devices or the ship’s 4,000 interactive portals. Passengers can use these to make the standard reservations and purchases as well as navigate through the ship, locate their children and find photos of themselves taken by official photographers to share on social media. Food or drinks may be ordered ahead of time to be served anywhere. Compass connects to online casino games, and allows guests to tune in to live shows from their staterooms to be greeted with a shout-out from the stage.

The more they do, the more the system learns about them and the more personalised their experience. The crew’s handheld devices interface with the Medallions so they can greet each guest by name and cater to their preferences without having to ask, as well as easily find guests to deliver their food and beverage orders.

Not about big data

“We believe that you elevate the guest experience by doing two things,” says Padgett of the philosophy behind the product. “First, increase the personalisation of the experience, so the experiences individuals are consuming are very meaningful and thus highly valued. And second, eliminate all the friction that it takes to consume that experience, basically, simplifying consumption so that more experiences can be consumed.”

It’s a similar approach to that used successfully at Disney. The MagicBand system asks what guests want to do and then provides them with an optimised path through the park: no more queuing for hours to ride Space Mountain. It allows them to order at restaurants ahead of time, sit anywhere they like and have the food find them. Just like Walt Disney World, a large cruise ship can be overwhelming, and there lies a barrier to the perfect holiday. But – so goes the thinking – if you get to know your guest as an individual, find out their personal ‘pain points’ and what they really want to spend their money on, the result is better value for all involved.

As Padgett declared in January 2017 during the CES presentation, however, “this is not about big data”. The intelligence gathered by each Medallion will be used only for the guest it belongs to, invested directly into improving that guest’s vacation. For him, segmentation is a kind of stereotyping: falling short of providing an individually personalised experience.

“What businesses do is take big data, analyse it and then at some point in the future, provide, some kind of change to the operation based on that data. To me, that’s not guest-centric,” he reflects.

With all this sharing of information, privacy is a natural concern. While the Medallions transmit only a string of encrypted digits, Padgett is quick to affirm that the system has been built from the start to comply with EU regulations, current and upcoming alike: “Our guests will have the ability to have us forget.”

As for real-world privacy, the guest location feature only works in settings fitted with Carnival’s sensors: that is, on board ships and in specially outfitted terminals. Only children are obliged to let their parents see where they are; adults travelling together can choose whether or not to display their locations to one another.

“The Medallion does not track; it’s not just a mini GPS,” Padgett explains. “It allows us, in experiential settings in which we’re delivering service to you, to identify you in those settings.” Anyone still harbouring suspicions will be able to opt out and use the standard NFC card system.

By removing the need to physically pay for anything, Carnival hopes to turn transactions into effortless human interactions, with every one of the thousands of passengers feeling like they are among friends and getting better value out of their cruise without significant extra effort from passengerfacing crew. The crew, in turn, will be freed up to focus on guest engagement, no longer needing to spend their time processing transactions, gathering guest information and managing queues at embarkation. And, of course, a passenger who isn’t stuck in a queue is a passenger free to spend their time and money elsewhere on the ship.

It is worth noting that Ocean Compass puts the onus on the guest to provide the system with the right information. Carnival’s promotional images make sure to show a grey-haired couple marvelling as they type their credit card details into a laptop, but it raises the question of whether they risk contradicting their ‘guest-centric’ philosophy by alienating senior travellers – a demographic that has often proved reluctant to engage with new gadgets.

Padgett is confident that most passengers will see it as a net positive, adding that the Medallion is designed to “enhance human interaction” rather than being the focal point of the passenger experience.

However seamless it is intended to be, new technology has a way of making itself known during the teething phase. Early guests on Royal Caribbean’s Quantum of the Seas encountered frozen apps, misplaced luggage and wristband glitches. While no system is flawless on its first outing, Padgett says he has tapped into his experience at Disney to design a product that can handle the demands of large-scale deployment: “The mindset of durability and resilience in the engineering development is fundamental.”

To fit out a ship with such innovations required a fair amount of inventive thinking in itself. Regal Princess got its overhaul in a speedy 12-day dry dock in Palermo, Italy at the end of 2016. Along with sensors and readers, 72 miles of cable and thousands of interactive portals were installed, as well as extra Wi-Fi access points. Caribbean Princess and Royal Princess will be given the same treatment in March and April 2017, although their systems won’t go live until early 2018. In November 2017, Regal Princess will sail from Port Everglades, Florida, where Padgett’s team is working to integrate the Ocean platform into the terminal.

“The design, engineering, development, manufacturing, testing and installation was all thought about holistically, at the very beginning,” says Padgett. “Every element was created to be installed efficiently, with high reliability, and to be serviced in an extremely simplistic way that would also be quick.”

The system is currently undergoing crew-only testing on Regal Princess, as well as at Carnival’s Experience and Innovation Centre in Doral, Florida. Padgett and his team have created a simulated cruise experience, from airport transfer to prefabricated Princess cabins, where testers can perform walkthroughs. On Regal Princess itself, redundant data centres and networks are ready to back up the main system but, if Ocean Compass is ever out of action, the Medallions will work the same way as a standard NFC card.

There’s no doubt that this represents a leap in the development of wearable technology for customer service, but it’s also a change in perspective for the customer experience. Amid a tyranny of choice, we see the beginnings of a zoomed-in approach – from big picture to the details and quirks of an individual personality. 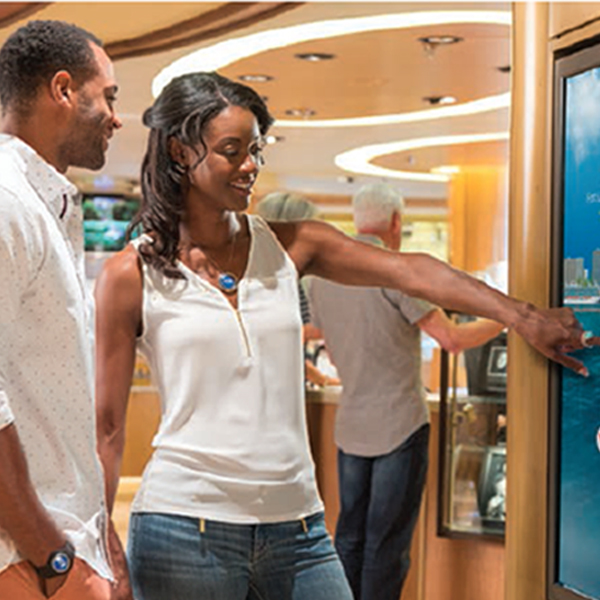 In addition to the Compass app, guests will be able to interact with informative portals throughout the ship 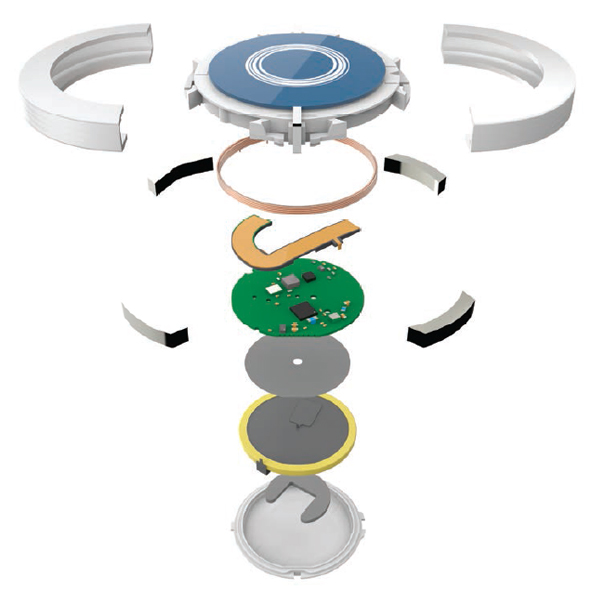 The Medallions to be provided to travellers are waterproof and secure, and will hold passengers’ names and sailing dates. 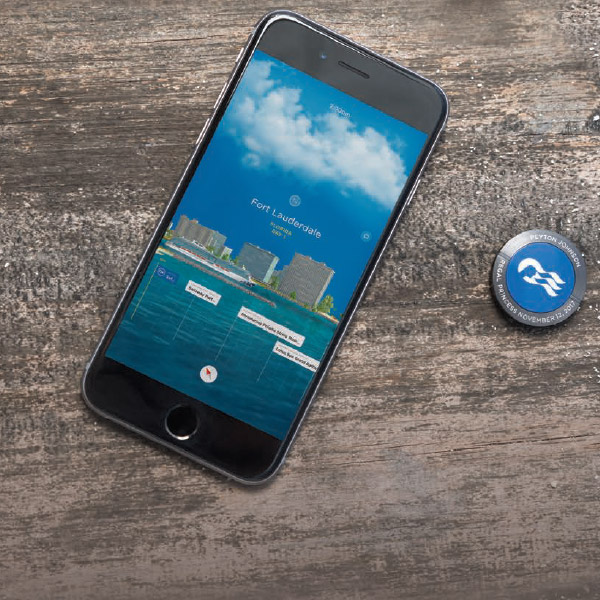 The wearable Ocean Medallion and Ocean Compass app from Carnival Corporation.
Post to: