Jewels of the Levant

Riven by terror attacks and economic instability in recent years, the Eastern Mediterranean is once again being viewed optimistically by cruise operators. Bradford Keen speaks with Justin Poulsen, vice-president for strategic pricing and itinerary planning at Silversea, and Chris Theophilides, CEO at Celestyal Cruises, about why interest in the region is reviving.

Let’s put the consequences of terror into context. In 2016, the same year in which attacks in Turkey sent many of the cruise operators to neighbouring shores, more people were killed individually by cardiovascular disease, cancer, diabetes, drowning, meningitis, and exposure to cold and heat than terrorism, according to the Institute of Health Metrics and Evaluation.

The difference is that hijacked lorries colliding with pedestrians, suicide bombs detonating in market places and rampaging gunmen are all enormously shocking, even if they do not claim as many lives.

The spectacle evokes fear, which is why Istanbul was stripped from many operators’ itineraries in the aftermath of terror attacks in 2015–16, as were ports in Tunisia and Egypt, which have also suffered from violence and uncertainty. Israel remains constrained by milder yet persistent travel cautions.

Terror threats contributed to the decline in the Eastern Mediterranean cruise market, but other geopolitical factors were at play too. In Lesbos, for example, after clashes broke out during the recent migrant crisis, some operators dropped the destination from their itineraries or diverted ships to alternative ports.

Fortunately, these responses are no longer required. Despite all its recent troubles, the Eastern Mediterranean cruise market is back on the rise. According to CLIA, destinations across the region were leading the boom in global passenger numbers, with an 8% climb from 2016.

Despite increased travellers, operators are keenly aware of the need to promote the Eastern Mediterranean’s best qualities, the better to drive home the message that the countries along its littoral provide some of the best waters for cruising.

Silversea employed the services of photographer Steve McCurry, best known for shooting the green-eyed Afghan girl on the cover of National Geographic. Training his lens on the sights of the Eastern Mediterranean, McCurry has helped Silversea show the “authentic beauty” of the region, says Justin Poulsen, vice-president, strategic pricing and itinerary planning at the company.

Indeed, the region remains on many travellers’ bucket lists, says Chris Theophilides, CEO at Celestyal Cruises. And while some destinations struggled during the three-year period of uncertainty, others were more resilient.

“Historically, the Eastern Mediterranean has suffered many times through crisis and decline due to geopolitical tensions, but the demand has always returned,” Theophilides says. “We strongly believe in the potential of this area, and that is the reason we operate here.

“Cruising, in particular, has been hardest hit due to the connectivity and access it provides to multiple destinations in the region. Now that geopolitical tensions in key highlight ports are gradually subsiding, cruising in the Eastern Mediterranean has a great opportunity to rebound.”

“Greece will truly leverage the opportunities the cruise industry can provide once it improves its port facilities, upgrades its services and draws the attention of investors to the value of investing in Greece.”
Chris Theophilides

While the past few years have been disconcerting, it would be wrong to think of the whole region as having suffered, Theophilides says, noting that some areas “have actually thrived”.

“Greece is enjoying its fifth year of recordbreaking tourism arrivals,” Theophilides explains. The country hosted 33 million visitors in 2018 and earned praise from the UN’s World Trade Organisation for being a tourism success story and an example for other countries to follow.

“The region’s earlier-than-expected rebound was helped by Greece’s consistent performance as a destination of global appeal, keeping cruising in the area alive until Turkey is reinstated as a viable cruise destination,” says Theophilides. Cyprus has also excelled, reaching its own record-breaking number of visitors.

But Greece and Cyprus cannot take all the credit. Theophilides lists the gradual reinclusion of Israel and Egypt in niche itineraries as playing an important role too. These routes can deliver “a fuller experience of the Eastern Mediterranean’s unique diversity”, the chief executive argues.

With greater geopolitical and financial stability, travellers are eager to visit the region. Celestyal has launched its ‘3 Continents’ and ‘Eclectic Aegean’ itineraries taking in Turkish, Egyptian, Cypriot and Israeli ports, as well as the more popular destinations in Greece.

“These facilities are the first exposure guests have to a destination and act as the interface between shipboard and landside experiences,” Poulsen explains. “It’s important that ports understand that differentiating the experience and creating the ability to customise for different types of cruise passengers is key, and I think we are seeing that in the Eastern Med.”

Piraeus will include four hotels – three five-star and one four-star – in the area along with a new cruise terminal and shopping centres across 40,000m2 of land.

Further east, Limassol in Cyprus also harbours aspirations of excellence with its new passenger terminal, capable of accommodating the largest cruise vessels. Its position is its power, offering travellers a gateway from the Suez Canal into the Mediterranean. According to Marella Cruises, of the TUI Group, it will launch 13 new destinations departing from Limassol port in 2019–20.

These developments are no doubt a welcome reprieve for many operating in the region, as the current infrastructure is inadequate, Theophilides says.

“Piraeus and Limassol are on the right track. But with only two ports, you cannot develop the cruising potential and dynamic of the area,” he argues. “For example, the ports at most of the Greek islands do not have adequate infrastructure to properly host cruise vessels – especially the new-generation cruise ships with a capacity of more than 3,500 passengers.

“Greece will truly leverage the opportunities the cruise industry can provide once it improves its port facilities, upgrades its services and draws the attention of investors to the value of investing in Greece.”

While some destinations are focusing on upgrading infrastructure, others are taking a different approach to entice operators. Since 2018, the Turkish Government has offered operators with ships carrying more than 100 passengers $25–45 per passenger, depending on the season, to ensure Turkey makes it onto their itineraries.

Theophilides applauds the plan as a starting point to motivate cruise operators, but says the decision ultimately lies more with passengers. “If someone is truly sceptical about security or instability, this will not affect their final decision. It will, however, accelerate the resurgence of a destination once the concerns subside.”

Better, perhaps, is to pay those operators that bring repeated business to the region, Theophilides says. Or other initiatives could be more effective, such as operators, tourism boards and local authorities working together on cooperative marketing campaigns to boost tourism, particularly with a focus on reopening destinations that have struggled in the wake of geopolitical instability.

“Our first and foremost concern is the safety of our guests, crew and vessel; there is no financial variable that can move the needle in this regard.”
Justin Poulsen

But Poulsen dismisses the incentive as inadequate for Silversea’s purposes. “Our first and foremost concern is the safety of our guests, crew and vessel; there is no financial variable that can move the needle in this regard,” he says.

“We are driven entirely by trends in consumer behaviour and meeting a market demand. If there is a market pull for itineraries with Turkish ports, we will see this reflected in our performance metrics and adjust accordingly. Due to the small size of our ships and higher yields, the financial incentive is immaterial.”

The period of uncertainty is coming to a close with increased geopolitical and economic stability, but the cyclical trends of tourism and the cruise market, as well as internal pressures such as overcapacity, always exert influence over operators, Poulsen notes. But he remains confident about the region, which was “always bound for a healthy return”.

33 million
The number of visitors Greece hosted in 2018 – a record.
Greek Government

Theophilides agrees, citing increased requests and bookings as clear evidence that the good days have returned. The area is just too warm and welcoming, and its cultures and histories too rich, for travellers to stay away for too long. 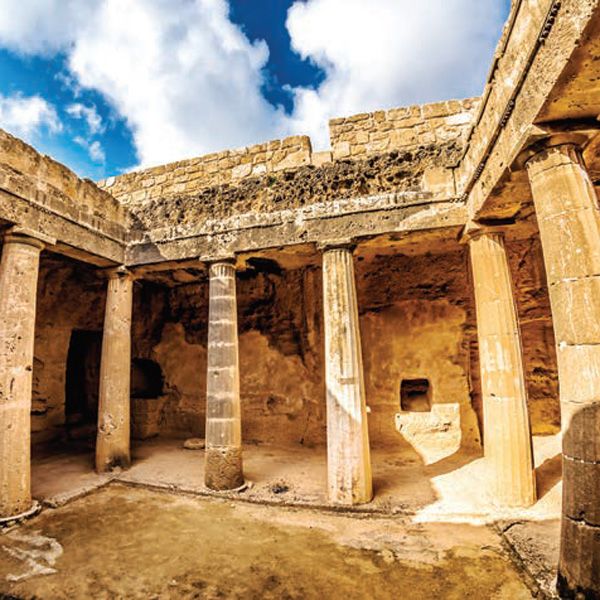 Ancient ruins in the city of Paphos, Cyprus. 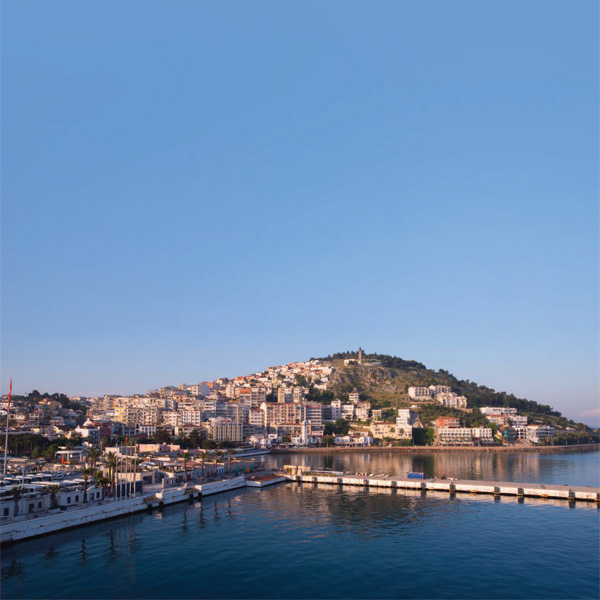 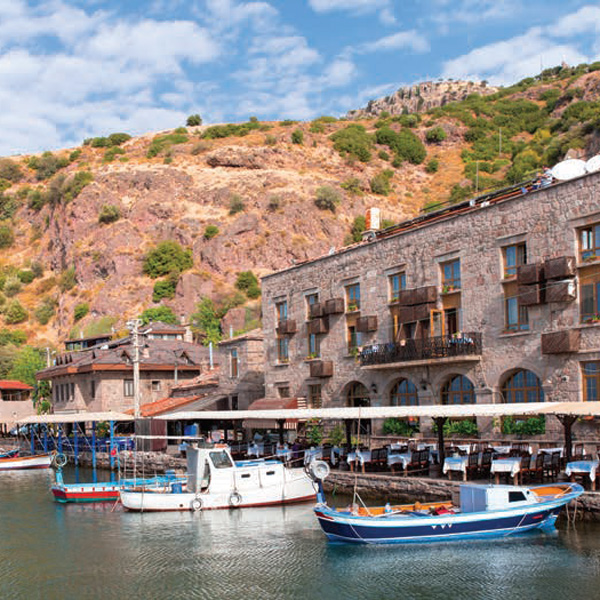 The beautiful Turkish coastal town of Assos, a cruise passenger's dream.
Post to: