Beginning the year with bulging order sheets, the lockdown has forced shipbuilders to shutter their yards, delaying some new build and refurbishment programmes, and stopping others in their tracks. Francesca Walker-Stevens investigates how they are adapting to this new reality, and how quickly deliveries can be expected to come back on track after the global economy finally reopens.

Bernard Meyer has never seen a bigger crisis in his 50 years in the industry. The owner of Germany’s largest shipbuilder foresees a dramatic fall in orders over the next three years, and believes it will be at least a decade before operations can return to their previous peak.

And to think a few months ago it was all going so well. Even back in those heady days of January, executives and pundits were frantically proclaiming 2020 as an ‘exceptional’ year for cruise shipbuilding, and industry journalists were pumping out articles about the most glamorous ships. While the rest of the European shipbuilding sector witnessed a downtick in demand, cruise orders were booming.

And why not? From wealthy baby boomers eager to try expedition cruises to the ever-growing appetites of affluent East Asian holidaymakers, 2020 really was on track to be the biggest ever for cruise new builds across the world – a record 25 vessels were due to get the champagne bottle treatment by this Christmas. As with so much else this year, things didn’t quite go to plan. Even in an industry floored by Covid-19, you get the sense that shipbuilders have floundered more than most. Over a dozen ships have already seen their launches postponed or their refurbishments delayed, as workers remain at home and dry docks stay empty.

And even if a vaccine is found and the world emerges blinking into the sunlight, it is by no means clear that shipbuilders will be able to pick up their tools and go right back to normal. Already, industry experts are muttering darkly of a recovery that stumbles on for decades, of shipbuilders needing government bailouts, and of the worst catastrophe since the 1973 oil crisis. 2020 is unlike anything even the canniest shipbuilders could possibly have imagined.

Due to leave its dry dock in Vigo, Spain, sometime this year, the Evrima was supposed to ‘usher in a new way of luxury travel’. For once, this feels like more than mere marketing fluff – from its silhouette to its facilities, this Ritz-Carlton superyacht really was remarkable. Designed to host 298 guests across 149 suites – with each passenger paying $4,900 a voyage for the privilege – the Evrima was unashamedly and exclusively aimed at the richest people on earth. For example, apart from a restaurant led by a Michelin-starred chef, Ritz- Carlton also promised guests a specialised bar where they could sip cognac and puff on cigars.

If the Evrima feels particularly luxurious, it was far from alone in terms of imminent new deliveries. Shipbuilders across Europe were, until recently anyway, putting the finishing touches on a veritable armada of cruise vessels. Glance back at the order list for 2020, indeed, and one of the most striking observations is its range. Near Trieste, for example, the venerable Fincantieri was hard at work on the Enchanted Princess, a colossal 330m ship for Princess Cruises, due to host over 3,500 passengers. At the Portuguese port of Viana do Castelo, WestSea Viana Shipyard was nearly done with the 9,300t, 200-passenger World Voyager, an expedition ship ordered by Mystic Cruises. Handsome sailing ships too, like the Star Clipper, built by Croatian company Brodosplit, were due to set off this year.

Hindsight is a hell of a thing. Earlier this year, CLIA executive Andy Harmer predicted that “the cruise industry has certainly cemented its role as a mainstream holiday choice over recent years, with more than 32 million guests expected to sail globally this year [2020]”. The explosion of new ships spoke to the general confidence of the cruise industry pre-pandemic, and signalled the sheer number of opportunities available to operators. Now, as the industry instead tries to rebuild its reputation and address critical media reports, such ambition has been interpreted in some quarters as hubris.

But this was, until a matter of months ago, a bullish sector preparing to embark on a new chapter of growth and evolution, getting ready to welcome more sophisticated passengers from more varied demographics – and not just one-percenters in floating palaces like Evrima. As Carolyn Spender Brown of Cruise Media put it back in January, “Young baby boomers want to be as comfortable as they are at home when they’re on the ship. And when they’re off the ship, they want to be on the edge.” Fair enough: how else to explain the 10 new expedition ships meant to sail in 2020? At the other end of the spectrum, wealthy Chinese visitors were another boon, with half a dozen ships destined for the Far East.

27%
The percentage by which, at its worst, STX Europe’s stock fell by compared with before its prepandemic figure.
Trading View

A good way of appreciating how rapidly cruise shipbuilding has collapsed over the past few months is examining the archives of industry journalism. Even in February, journalists were still penning articles with titles like ‘A look at the new Emerald Azzurra’, and ‘117 new cruise ships on forward-looking order book’. Skip forward a few pages, though, and the stories quickly get gloomier; phrases like ‘suspending operations’ and ‘shipbuilder warns of lay-off’ appearing with worrying frequency. And by the end of March, with the lockdown dragging on, the global economy tumbling and the cruise industry paralysed, the full extent of the catastrophe was impossible to ignore.

While knowledge of the extent of the impact on future order books is limited, Covid-19 is already having an impact on all ships with maiden voyages planned for 2020. The Evrima was one of the first victims. Ritz-Carlton announced that passengers would only be able to savour their Hennessys in April 2021 at the earliest.

That is just the start. Several vessels due to be finished this year have been delayed thanks to shuttered shipyards, including the Enchanted Princess and the Iona – which, at 184,000t, is the biggest ship P&O Cruises has ever commissioned. At the same time, many older ships are suffering too, as shipyards limit or cancel work refits.

Allure of the Seas, a Royal Caribbean vessel, was due to enter dry dock for a 58-day, $165 million refurbishment in the middle of March. As of right now, the project is postponed indefinitely, with suggestions that Allure might only receive basic maintenance work as opposed to a complete makeover. Explorer of the Seas, another Royal Caribbean ship, is in a similar position.

Nor are ships that managed to sneak out before the pandemic spread truly safe either. Though Scarlet Lady, star of Richard Branson’s new Virgin Voyages operator, toured UK ports to great fanfare in February, press events in New York and Miami were hastily cancelled as the virus spread. A special voyage that was due to start on 15 July – marking Branson’s 70th birthday – has been purged from Virgin websites.

And though Scarlet Lady does still, at time of writing, have trips scheduled from August, they too remain shrouded in uncertainty.

More to the point, if all this devastates cruise ships and their employees, it also hurts the shipyards that service them. In mid-March, Meyer Turku furloughed some staff – lay-offs that became permanent by the end of April after bosses decided that plans to build two ships a year were no longer sustainable. And if the Finnish builder has particularly struggled, counterparts across the continent tell similar tales. Fincantieri and Chantiers de l’Atlantique both reopened in April, but are operating at reduced capacity. A decision regarding whether to approve their merger has also been postponed. STX Europe saw its stock fall by as much as 27% on its prepandemic high.

When the ships are down

When the world eventually reopens, and cruise ships once again sail out from port, shipyards will not be expecting an immediate return to the halcyon days of December 2019, unbroken if not unbruised – as those redundancies in Finland seem to demonstrate. Operators are already cancelling future builds if they can, and postponing them where they must, with one customer bluntly telling Meyer Werft that they would be happy if they emerged from the crisis with just their existing fleet of liners intact.

To make matters worse, it seems likely that as operators adapt to a new environment, they will look to pinch pennies, with an emphasis on retrofitting existing fleets, rather than finding the considerable capital needed for building new ships from scratch. It goes without saying that this would be dreadful news for Europe’s shipyards, especially given the ever-increasing capacity and capability among their Chinese peers. It is an existential dilemma that industry bosses are not insensitive to either. “If the EU fails to adopt tailormade sectoral policies and financial support,” warned Kjersti Kleven, chairperson at SEA Europe, “Europe risks [losing] its strategic maritime technology sector to Asia.”

Governments, for their part, have replied in kind, with several European countries announcing that cruise operators would be allowed to defer debt repayments – throwing a desperately needed lifeline to shipbuilders down the supply chain.

All the same, it seems reasonable to agree with Meyer that the Covid-19 emergency is “completely different” to previous crises, including 9/11 and the 2008 financial crash. For all that though, he struck an optimistic tone when addressing staff at his Papenburg yard in April. “We need to have a lot of new ideas,” he said, emphasising the flexibility of private companies like his over state-owned shipyards. “I am sure we will make it.” Hopefully so, but the fight to come will make those boom days seem like a half-remembered fairy tale. 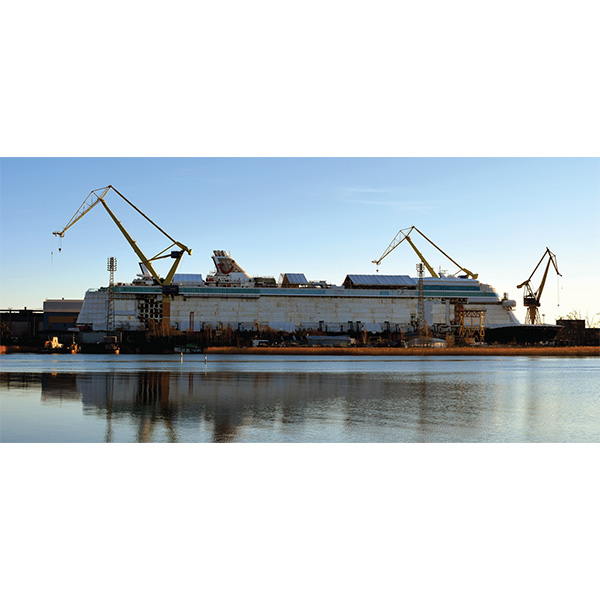 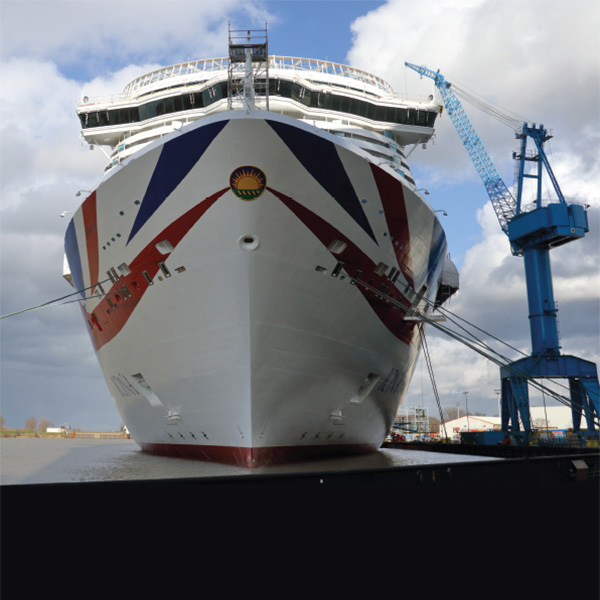 The Iona, P&O’s largest-ever ship, remains dry docked in Germany where it was built.
Post to: