If the cap fits

Last year, the IMO agreed to cap sulphur emissions from all ships. With less than a year to go before the enforcement of the new rules, Jim Banks talks to Tom Strang from Carnival and Dr Lucy Gilliam from Transport & Environment about the implications of the new regulations and whether the industry is prepared.

January 2020 will mark a big change in the shipping industry as a whole, including the cruise sector, when new IMO regulations come into force capping sulphur oxide (SOx) emissions at 0.5%. This means newer ships will need to burn cleaner fuel, while older ships may have to be fitted with scrubber systems to capture harmful emissions.

Airborne emissions – including SOx and particulate matter – are eventually deposited in the sea and on land, where they are a factor in causing acid rain and impacting upon air quality in coastal regions. The new rules will require all ships to reduce their emissions by lowering the permissible sulphur content of fuel from 3.5% sulphur to 0.5%, unless another technology is used to capture emissions. As a benchmark, the current limit for marine fuels is 3,500 times higher than for diesel in European road vehicles.

“It is important to have global goals and regulations,” says Dr Lucy Gilliam about the IMO’s new rules. Heading up the aviation and shipping division at sustainability campaign group Transport & Environment, she believes that the new rules were a long time coming. “The EU went first with sulphur, and we need that kind of regional action, as well as global rules. Meeting the new sulphur cap will make a large difference to human and ecological health.

“Shipping, especially in ports and along coastlines, is a major source of emissions and, in Europe, the majority of emissions are within 50km of the coast, rather than out on the high seas, so they are a significant contributor to overall air pollution,” says Gilliam. “In the Mediterranean Sea, for example, we can see concentrations of SOx and nitrogen oxide (NOx) by satellite. We looked at ferries crossing between Dover and Calais, and we found that one ferry can produce SOx emissions equivalent to 400,000 cars.”

Emissions are an issue on which authorities have shown they will take action. Last year, the captain of a P&O cruise ship found to be burning fuel with excessive sulphur levels was fined €100,000 in a Marseille court. This raises the question of whether the cruise industry fully understands the regulations or has taken steps to address their implications.

“In the Mediterranean Sea, for example, we can see concentrations of SOx and NOx by satellite. We looked at ferries crossing between Dover and Calais, and we found that one ferry can produce SOx emissions equivalent to 400,000 cars.”
Dr Lucy Gilliam

“The cruise industry is prepared, not only from Carnival’s perspective, but also from that of other organisations in which I sit,” says Tom Strang, senior vice-president for maritime affairs at Carnival. “Over the years, we have already been exposed to emission control areas (ECAs) in the US, the North Sea and the Baltic, for example, and because a lot of our activity is already taking place inside ECAs, we have had to be better prepared than some other areas of industry.”

0.5%
The permissible sulphur content of fuel after the IMO’s 2020 cap.
IMO

The options for cruise companies seeking to meet the new cap are threefold: switch to low-sulphur fuel oils (LSFOs), invest in ships that can burn liquefied natural gas (LNG) or install exhaust gas cleaning systems (EGCSs). The concern about LSFOs is that the supply chain will not meet the industry’s needs.

“There may be some challenges with the availability of different fuels in different locations, but we are ready for that,” says Strang. “There are challenges from the supply side, but everyone believes that there will be sufficient fuel available in the major bunkers, though it could be more challenging in other locations. But we are confident that we have the correct plan to ensure we have the right fuels in the places we need them.”

“Oil refineries have responded to the need to make cleaner fuels available, ready for the switch in January,” says Gilliam. “In the regions with the heaviest shipping flows, companies cannot get away with cheating, as there are robust enforcement measures being developed for dense areas of traffic, like sniffers and satellite monitoring to deter cheating.”

The IMO decided to bring in an SOx cap partly because its regulations also allow older ships to be fitted with EGCSs and continue to burn highsulphur fuel oil (HSFO). EGCSs, or in Carnival’s terms advanced air quality systems (AAQSs), are usually referred to as scrubber systems. Open-loop scrubbers capture emissions and discharge them into the sea, while closed-loop systems store them for later disposal.

“The global sulphur cap is clearly a major change, but certainly within Carnival we are well prepared for that,” says Strang. “We are on the way to having our fleet fully installed with AAQSs. If you look at the different fuel options, the 0.5% cap introduces a new type of fuel to the maritime sector as a whole, and you have to be prepared for that. You can use AAQSs or you could switch to LNG, as we are doing in some of our new builds.”

Scrubbers can remove more than 98% of SOx from a ship’s exhaust, resulting in emissions lower than those of marine gas oil. Some ports, however, have their own rules – Singapore followed ports in Germany and Belgium by outlawing open-loop systems.

“It is entirely equivalent from an emissions perspective to what you would get from using low-sulphur fuel,” notes Strang. “Carnival has committed heavily to AAQSs, which are all open-loop and are in compliance with the IMO regulations. Some ports with sensitive ecologies have restricted the use of open-loop EGCSs where they believe there could be a detrimental impact. We have worked closely with them to address any concerns they might have.”

Currently, over 60% of Carnival’s vessels are fitted with scrubbers, while 11 new-build ships will use dual-fuel LNG. The company has also installed equipment to monitor the compliance parameters for exhaust emissions and EGCSs wash water, and claims it has built up a data record that shows it is well within the requirements of all exhaust emissions and wash water regulations, as well as all major water discharge standards.

The IMO wash water discharge criteria sets strict limits for a set of measured parameters to prevent harmful pollutants that may be found in the exhaust gas from ending up in the sea. Scrubbers are permitted as a way to meet the requirements of the cap, though they have come in for criticism as a way of dodging the issue.

“Scrubbers just discharge pollutants into the water directly, so if you are investing heavily in scrubbers to burn dirty HSFO, then you are not looking to the future,” remarks Gilliam. “Cruise companies make billions in profits, so they could invest it in future-proofing their ships.

Understandably, many in the industry feel that they are doing just that, while also taking a rational view of compliance with existing standards.

“This needs to be based on science and not, as often seems to be the case, on an emotional argument that is based around doing nothing. We are looking at what can be done to reduce air emissions, which seem to be a cause of more concern in many locations. We believe in AAQS technology, and we are committed to using it because we believe it is beneficial to the air environment and has negligible impact on the marine environment,” notes Strang.

400,000 cars
The equivalent SOx emission that one ferry can produce crossing from Dover to Calais.
Transport & Environment

Building for the future

Carnival would reasonably argue that it is investing in the future. It has led the industry in the use of LNG, which is known as the world's cleanest-burning fossil fuel, and has several new ships on order that will use it. The company is also studying fuel cells as a way of powering its vessels in the future. Its commitment to new builds that will use LNG has already borne fruit, the first – the AIDAnova – was delivered at the end of 2018 and is now operating in the Canary Islands and Madeira.

“Across the industry, more ships are being ordered that will be ready for LNG or will fully operate using LNG. There are projects around the world that promote the use of LNG as the best and cleanest fossil fuel available.”
Tom Strang

“Across the industry, more ships are being ordered that will be ready for LNG or will fully operate using LNG. There are projects around the world that promote the use of LNG as the best and cleanest fossil fuel available that meets or exceeds all of the current regulatory requirements. The future is bright in that regard,” explains Strang.

With the industry now making one big step forward in emissions control, it must look forward to the next target, though it should have plenty of time as the IMO has pushed back potential measures to reduce greenhouse gases until 2023. Environmental campaigners, however, will keep their eyes focused on the impact shipping has on vulnerable ecosystems.

“Black carbon, particulates and CO2 in the Arctic are speeding up ice melt and raising global temperatures, and in the past few years shipping in that region has risen by 300%, so we are trying to ban the worst fuel,” says Gilliam.

With the IMO committed to cutting total greenhouse gas emissions from shipping by at least 50% by 2050, the industry and environmental lobby will have to work hard to find common ground. 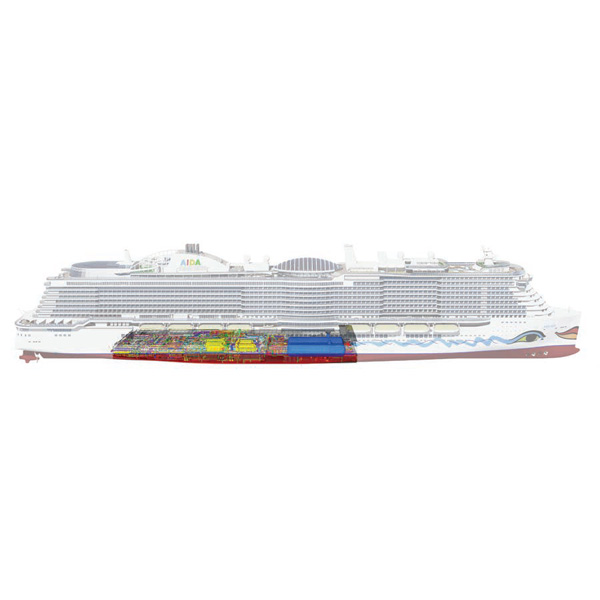 Where LNG is stored on the AIDAnova. 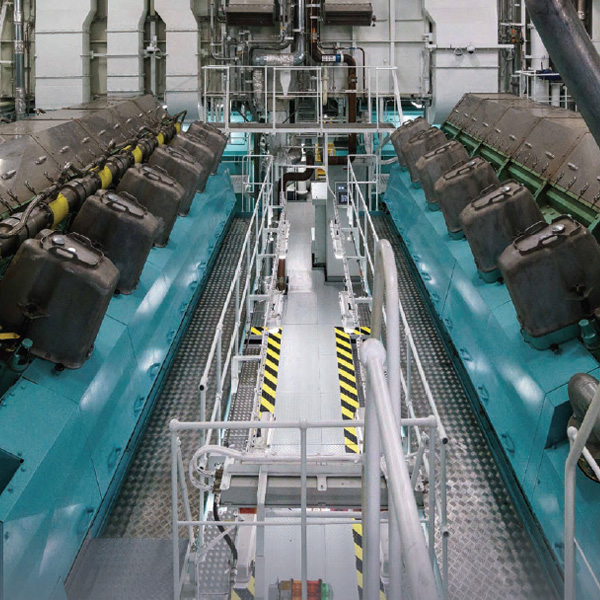 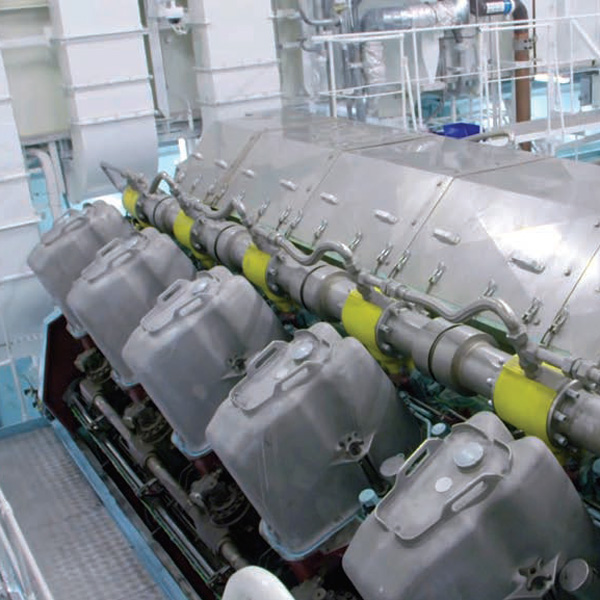