The launch of hybrid cruise vessels, which run on a mixture of conventional fuels and battery power, have long been talked about as a turning point for the industry. Now, the talk is over and the reality is here. Jim Banks looks at the hybrid vessels coming into operation and considers their impact in the years to come.

Hybrid cars have become a familiar presence on our roads. Now, ferries and cruise ships are adopting similar technology – on a much larger scale – and ushering in a new era of low-emission vessels that could represent a paradigm shift in the industry. Combining fossil fuels and electric power, these vessels represent a big step towards cleaner and greener cruising.

The idea for ships running on electric power is at least a century old, but only in recent years has it become a tangible reality for commercial vessels. This new found opportunity has been driven, in part, by refinements in technology and by the growing awareness of sustainability and pollution as concerns among the travelling public. Regulation, however, has been the real catalyst.

Hybrid ferries and cruise ships, after all, emit vastly reduced amounts of nitrogen (NOx) and sulphur (SOx) compounds into the atmosphere. Given that the International Maritime Organization (IMO)’s global sulphur cap for the shipping industry comes into force in 2020, requiring ships to burn fuel oil with a sulphur content of no more than 0.5%, it is perhaps unsurprising that operators have been fixed on the broader issues of emissions.

The ferry industry has led the way in showing that traditional bunker fuel could eventually be a thing of the past. In the UK, routes around the Hebrides are now served by a diesel-electric hybrid vessel operated by CalMac Ferries. M/V Copenhagen operates two hybrid ferries, and Scandlines replaced a diesel engine with a 2.6MWh battery in four vessels in 2015.

In the cruise industry meanwhile, Hurtigruten was the first cruise line to grasp the opportunities offered by a switch to hybrid engines. Used to taking passengers down the scenic western and northern Norwegian coasts, as well as offering a range of expedition cruises in the Arctic Circle, it has built ships that can operate on full electric propulsion for up to 30 minutes, which could reduce fuel consumption by up to 20% and reduce CO2 emissions by as much as 6,400t a year.

Hurtigruten recently made history with the launch of the Roald Amundsen, the world’s first hybridpowered cruise ship, in Tromsø, Norway. This summer, the 530-passenger vessel, named after the famed Norwegian polar explorer, welcomed its first passengers. Built in the Kleven Yards and with a gross tonnage of 20,889, the 140m vessel is the first to rely purely on battery power for part of its journey, during which time it burns no fuel and creates no emissions. The battery, however, is not idle even when traditional fuel is powering the engines.

With the engines running, the battery packs can be called in to enable ‘peak shaving’, which means the batteries are backing up the engine power to help reduce CO2 emissions even when the ship is not running fully on electric power.

This is not the only step the operator is taking to control emissions and run a greener fleet. Hurtigruten is also intending to implement an upgrade on the main engines of many of its existing ships, which will run on liquefied natural gas (LNG) instead of diesel power, as well as having hybrid battery systems installed.

The color of cruise

Designed by Fosen Yard, the Color Hybrid is another vessel that will bring hybrid technology centre stage in the cruise industry. When launched, it will be larger than the Roald Amundsen, coming in at 160m, and will be able to carry up to 2,000 passengers and 500 cars. What’s more, the Color Hybrid will be the world’s largest plug-in hybrid cruise ship, and, like the Amundsen, it will be able to switch entirely to battery power for parts of its journey.

The new vessel, which is scheduled to operate on the crossing between Sandefjord in Norway and Strømstad in Sweden from January 2020, is currently under construction at the Ulstein shipyard. Its 4.7MWh battery pack will enable it to travel 3.2nm using only electric power. Furthermore, this battery will be charged in Sandefjord during its overnight stay, and all of the electricity for the charging process will be generated from renewable sources.

“Ulstein Verft has delivered more than 300 vessels throughout the past century, so when Color Line wanted to expand its fleet with an innovative vessel, we were happy to be awarded the contract and to be chosen as a partner for this project,” says Lene Trude Solheim, director of organisation and communication at Ulstein Group. “Building such a complex vessel challenges both our organisation and all our subsuppliers. The demand for co-ordination and logistics is quite extreme.”

The ‘Ulstein hybrid propulsion concept’ that powers the Color Hybrid is a combination of dieselmechanical and diesel-electric systems that purports to be more economical than conventional dieselelectric systems, as it combines higher efficiency and better performance at high loads with improved fuel consumption at low loads. The concept requires 65t of batteries to be incorporated into the vessel, distributed in two separate engine compartments.

65t
Weight of batteries on board the Color Hybrid.
Ulstein Verft

In what is called the ‘father-and-son’ configuration, propulsion is provided by two large and two small engines – half the traditional eight engines – and the two smaller engines can be used to recharge the ship’s batteries. As well as charging overnight using power from the Sandefjord power facility, the vessel will also be able to recharge at other Norwegian ports – including Oslo, Kristiansand and Larvik – or by using the on-board generators.

The construction process of such an innovative vessel certainly offers key lessons for the future.

“There are always things to learn and to do better next time,” remarks Solheim. “Positioning ourselves into new segments is difficult and challenging, but we have managed to construct an advanced and complex vessel within a very short time. We look forward to seeing the vessel sailing and to be able to please passengers travelling on it.”

Hurtigruten and Color Line are far from the only lines investing in hybrid technology. In December 2017, cruise operator Ponant announced the first ever hybrid cruise icebreaker. Set to launch in Spring 2021, Le Commandant-Charcot will be a luxury polar exploration vessel that uses a hybrid propulsion system combining LNG and electric generators to minimise its environmental impact on the sensitive ecosystem of the Arctic. Unlike other hybrid cruise ships, it is an icebreaker, so will also be able to travel through fractures in the ice on frozen seas.

Hybrid vessels are undoubtedly here to stay, and if the regulatory environment puts further pressure on the environmental performance of the shipping industry then it may well become the standard propulsion technology for the cruise industry in the years to come. In fact, to get an idea of what the future might hold, it may be useful to look again at the ferry industry, which now has its eye on fully electric vessels.

The Ampere, which went into service as far back as 2015, was the world’s first fully electric ferry. Built by Norwegian shipyard Fjellstrand for the Norled ferry company, it makes 34 trips each day between Lavik and Oppedal. It has vastly reduced NOx and CO2 emissions, and cut the level of noise pollution. The EU’s E-ferry project is now pushing forward the design, construction and demonstration of a fully electric-powered green ferry.

“Positioning ourselves into new segments is difficult and challenging, but we have managed to construct an advanced and complex vessel within a very short time. We look forward to seeing the vessel sailing .”
Lene Trude Solheim, Ulstein Group

There is still a long way to go before fully electric technology will make its way into the cruise industry. For now, cruise operators are firmly focused on the use of LNG as an alternative fuel and the incorporation of hybrid systems to enable short periods of fully electric propulsion. Both will have a substantial positive impact on the industry’s environmental credentials, pleasing regulators and passengers alike.

34
Trips the Ampere, a fully electric ferry, makes each day between Lavik and Oppedal, in Norway.
Norled

It pays to remember, however, that the hybrid vessels that are now firmly a feature of the cruise business were once thought of as a pipe dream – something that would only manifest far in the future. That future has now arrived, so the next dream will be of fully electric vessels, just as it was as far back as the early 20th century. 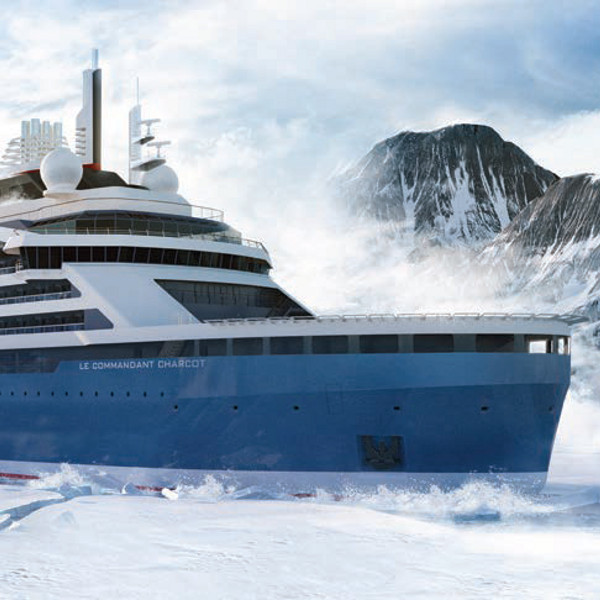 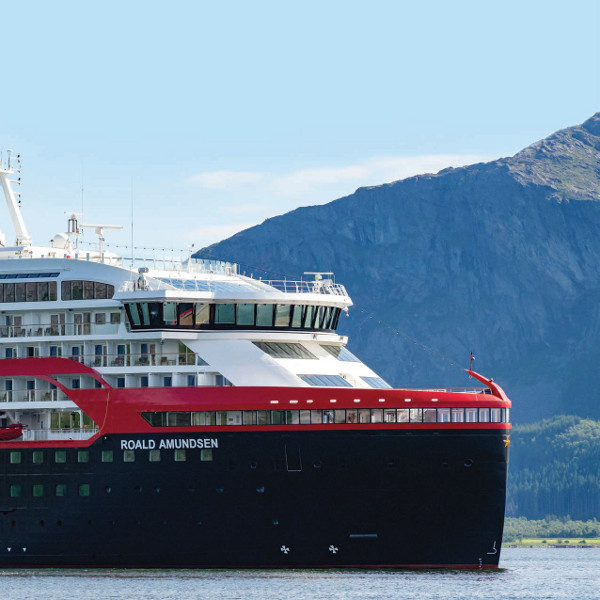 The hybrid vessel Roald Amundsen can operate on full electric propulsion for 30 minutes. 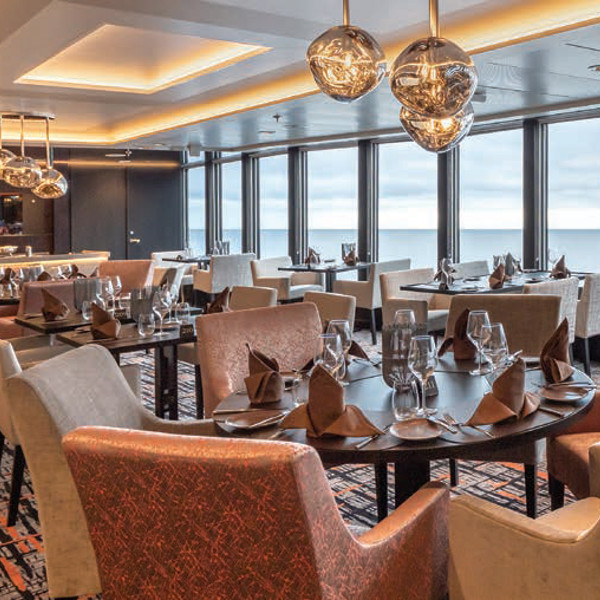