As craft beer rapidly gains popularity, what efforts is the cruise industry making to modernise the drinking tastes of its guests and keep pace with shoreside trends? Sophie Peacock speaks to Wes Cort at Norwegian Cruise Line about the company’s efforts to get ahead of the competition.

From Mumbai to Munich to Montreal, in the past few years, craft beer has emerged as a global phenomenon.

It's a trend that cruise operators have been quick to notice, with brands big and small making more stringent efforts to cater for the discerning beer drinker. Carnival Cruise Line launched Carnival Vista with a working brewery on board where passengers can pour their own microbrews at tabletop taps; Norwegian Cruise Line's Escape was launched with the District Brewhouse, the result of a partnership with Miami-based Wynwood Brewing Company, and offers 24 rotating beers on tap; and the Royal Caribbean's Quantum of the Seas and Anthem of the Seas gives new life to the gastropub with Michaels Genuine Pub featuring almost 20 craft beers available.

It has even got to the point where cruise brands are marking historic events with the launch of bespoke commemorative tipples, after Princess introduced an exclusive craft IPA fleetwide as part of its 50th anniversary celebrations.

"We know our guests love distinct experiences and authentic flavours," Jonathan Wilson, Princess Cruises' vice-president of food and beverage services, observed at the launch. "The Seawitch West Coast IPA not only commemorates our milestone anniversary but it is also meant to inspire our guests to celebrate their sea journeys with Princess."

Using a celebration of tradition and longevity is a persuasive way to market new directions to a dedicated customer base, but the cruise industry is not traditionally thought of as being dictated to by the tastes of the younger generation. According to a CLIA report from 2014 surveying the demographic profile of the North American cruise market, the average age of a cruise passenger is 49; a similar analysis from The Brewers Association finds that craft beer is increasingly being drunk by young women between the ages of 21 and 34.

"Craft beer certainly started with a boutique presence but now it's essentially mainstream," says Wes Cort, director of restaurant and beverage development and operations at Norwegian Cruise Line. "And it continues to move forward while the rest of beer goes backwards."

So are cruise companies jumping on the craft beer bandwagon in an effort to attract younger passengers? Or are they aiming to encourage more adventurous and modern tastes among the current reliable demographic? The majority of emerging trends in the food and beverage markets at the moment are geared towards millennials, a fact of which Cort accepts, but does not see as a deterrent.

"They desire different taste profiles and they're willing to experiment," he explains. "But I can tell you that, for our guests who cruise with us, the demographic is a little broader, because they want to expand their experiences. They see that we offer plenty of food and beverage venues, restaurants, bars and lounges, which we provide some very cutting-edge products, and they want to experiment. Mum and dad want to have what the kids are having, or they're excited to see that we carry craft beers that they see back home and want to try them for the first time."

As it grows, the craft beer movement strives for a continual increase in quality and uniqueness of flavours; as the industry becomes more adventurous so do its customers. "The reason for us to bring craft beer to Norwegian is that this agenda is entirely in line with what we're doing across all parts of our business; improving the quality of our products," says Cort.

Furthermore, due to the increasing popularity of craft beer being sold in local bars and specialist breweries, beer-savvy cruise guests are already demanding and expecting to see the same products on offer when they go on vacation.

"That is one of the things that really surprised me when we launched the District Brewhouse on board Escape; how excited our guests were when they came on board to see we had 24 beers on tap and another 54 brands in bottles," says Cort. "We used to have a lot of domestic draught beer on tap - Budweiser, Bud Light, Coors Light - which we don't have any more. There are a few brands that are in demand and so we still carry them in bottles - they actually remain the most popular beers, just not so on draught. And craft beer you really need to have available on draught."

"As it grows, the craft beer movement strives for a continual increase in quality and uniqueness of flavours; as the industry becomes more adventurous, so do its customers."

Bars that reach for a sense of shoreside authenticity and evoke a local aesthetic, such as the Royal Caribbean's Dog and Badger Pub on Independence of the Seas, are certainly comforting for guests looking to enjoy recognisable beer brands, but creating a modern and stylish atmosphere is also fundamental for selling and introducing new products. With Escape, Norwegian endeavoured to conjure a bar environment for the craft beer on sale, the direction being to create surroundings that were far from generic or commercial; just like the new varieties of beer on sale.

"With the District Brewhouse, we wanted to create a warehouse-type environment and the designers executed that," says Cort. "But it wasn't just about making it look like a craft beer hall, we knew we needed other elements to make it successful, so we implemented a lot of interactive events for guests, high-quality entertainment, and it became the place everybody ends up at the end of the night - not only our guests but also the other entertainers, just to enjoy the atmosphere.

The art of the craft

When they travel, passengers expect to different ports that the ship carries a range of products from or in keeping with that area. The bespoke nature of craft beer is obviously well suited for this, as Cort concurs, "For example, on Pride of America we carried a full line of beers for Hawaii; while we were in Alaska over the mid-year, three of our ships carried beers from an Alaskan brewery. We also do some expensive programming with the Norwegian Dawn during the mid-year when she sails out of Boston with Boston Beers."

According to Cort, Norwegian Cruise Line made the decision going forward to aim to be the leader in providing a great beverage programme, not just in the cruise industry but in hospitality as a whole. "You can't have a great beverage programme without great beer and you can't have great beer without having craft beer," he explains. "And it's not only about having the products, but also the right equipment. So when we launch new ships, as we did with the Norwegian Escape and added craft beer to the on-board District Brewhouse they are fully up to date; as part of our new Norwegian Edge programme, we're investing in upgrading all our systems to be able to provide draught beer with state-of-the-art equipment."

As an increasing number of drinks manufacturers begin to branch out into craft beer, the market for collaborations with cruise companies grows. For Norwegian, the goal is to align the brands with a multitude of beer companies of all sizes. "So when we talk to our partners at Coors for example, we say 'okay, we're going to carry your mainline products but we're also interested in what you have within craft beer'," explains Cort; "We really partner with everyone for craft beer."

Though more expensive for guests to purchase than main brand beers, craft beer is not waning in popularity. "The raw product is pricier, but also logistically it's more expensive to handle," says Cort.

"Nearly all craft beer is non-pasteurised, meaning that it doesn't have a really long shelf life, at most 90 days, and they have to be refrigerated all the time. But guests understand that and are willing to pay for it."

With companies such as Norwegian aiming to maintain the success of craft beer in the cruise industry, a game plan to secure this is surely essential.

"There's a couple of things in the works for future ships, some of which are going to be really cool, so we're also working to improve the draft beer equipment so we can accept more craft beer on board," says Cort. "We're making a $400-million investment in our products, and a big part of that is food and beverage, and so it is a lot to do with craft and draught beer. We'll probably also be doing more events related to beer; just as we deal with wine and have wine makers on board and do wine dinners, we'll be doing all the same things with beer."

Whether the prevalence of craft beer will carry the popularity of cruise holidays to younger generations is perhaps a tenuous suggestion. However, its success is sure to capture the attention and tastebuds of those already on board with taking their vacations at sea. 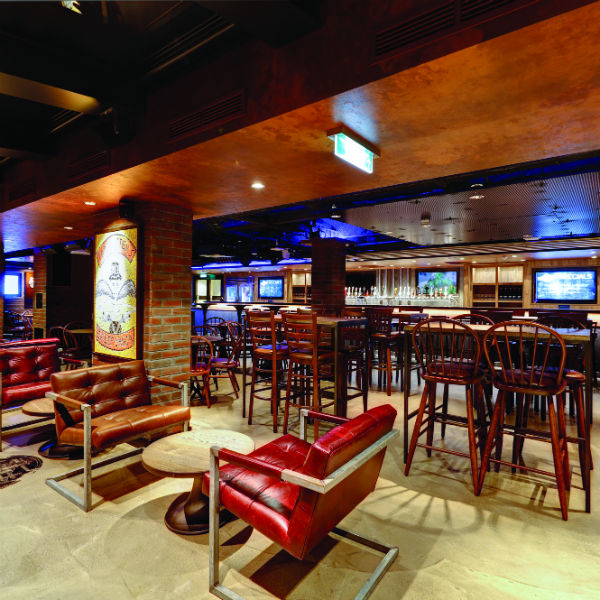 The District Brewhouse on board Norwegian Escape. 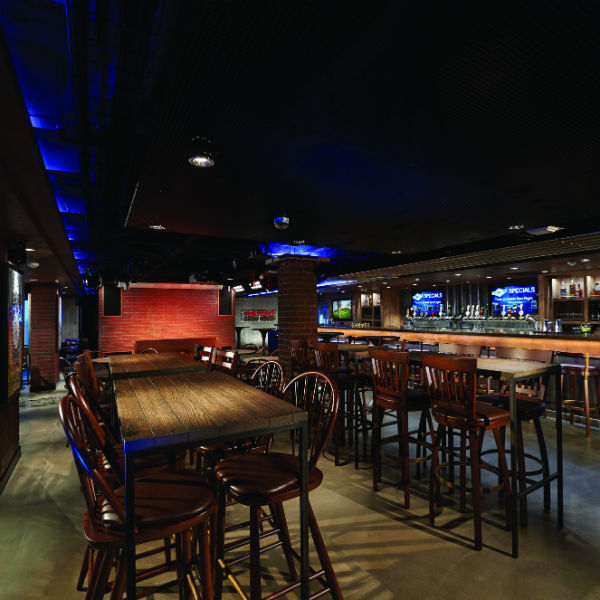 It isn’t just millennials that enjoy craft beer as a wide range of cruise passengers is showing a preference for it. 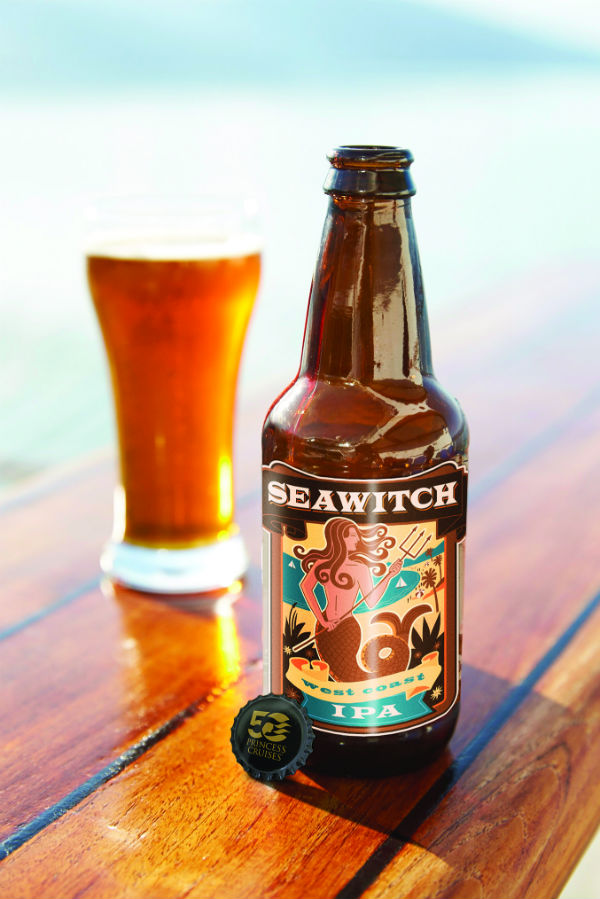 The Seawitch West Coast IPA commemorates a milestone anniversary for Princess.
Post to: