Scheduled to take delivery of two very different prototype vessels later this year, including the largest ship ever built for a European cruise line, MSC Cruises is in the midst of unprecedented fleet expansion. World Cruise Industry Review takes a look at the operator’s heaving orders book and what this could mean for its international standing.

Not even steady rainfall over the Italian Gulf of Trieste could dampen the spirits of delegates assembled at the Fincantieri Shipyard in Monfalcone at the beginning of February. Some had come from as far as the Port of Miami to witness the official launch of the first stage of construction of MSC Seaview. In keeping with an old Venetian seafaring tradition, the occasion was marked by a coin ceremony, with coppers welded to the keel of the new vessel as a symbol of good luck.

Observing proceedings, Giuseppe Bono, CEO of Fincactieri, heaped praise on his workforce and expressed a desire for the shipyard to work with MSC Cruises again in the not-too-distant future.

When built, MSC Seaview will be the sister ship to MSC Seaside – which launches this December in Miami – and the second ship belonging to the Switzerland-headquartered operator’s new Seaside class. Together, they will be the largest ships ever built in Italy.

Fincactieri, now the largest shipbuilder in Europe, has been a notable beneficiary of MSC’s current investment programme in newbuilds. Of the €9 billion set aside for the construction of new vessels, €2.5 billion has been spent so far on these two ships presently residing in its dock.

The fourth-largest cruise company in the world, MSC can’t be said to lack ambition. MSC Seaview – which will sail its first season beginning June 2018 with an itinerary including Genoa, Marseille and Barcelona – will measure an impressive 160,000GRT and have a capacity of 5,179 passengers.

MSC Seaside, which debuts in the Caribbean in December 2017, will also incorporate a set of well-appointed features including a glass skywalk over the back of the ship and a large aqua-park, making up the highest ratio of outdoor space at sea. Notably, Miami will be MSC Seaside’s homeport for its first year, as the line looks to break further ground in the US – a market in which MSC has a rather small share compared with its European operations.

In a recent interview, MSC Cruises executive chairman Pierfrancesco Vago confirmed that his company was ready to make steps in the US and take on the monopoly currently held by Royal Caribbean International, Carnival Cruises and Norwegian Cruise Line.

"The new MSC Cruises World-class prototype will feature a record-breaking futuristically conceived design that will make the ship a truly unique place to be at sea, while maximising the open-air space available to guests."

“We are ready to come in great force to the North American market… and we wanted to have something that would really differentiate the brand,” he explained. “We designed this ship with Miami in mind.”

Speaking at the coin ceremony, Vago also described the Seaside class as a “game-changing prototype” that underpinned “the next phase of our global growth as the world’s largest privately owned cruise line”.

MSC’s plan is to add 11 ships to the fleet over the next decade, almost doubling the total number from 12 to 23 through to 2026. The operator is aiming to nearly triple its passenger numbers from two million to over five million across the same period.

Seaside is one of four classes of ship under construction. Also on the books are the Meraviglia class, which will be large enough to accommodate 5,700 passengers, and the Meraviglia Plus class, pencilled in for completion in 2020–2022, with a capacity of 6,297 guests.

When MSC takes delivery of the first Meraviglia vessel in June this year, it will be in possession of the largest ship ever built for a European cruise line. By passenger capacity, the class will be the second biggest in the world, after Royal Caribbean’s Oasis and Allure of the Seas. Demand for the first Meraviglia ship, which is currently undergoing finishing touches at STX France and will begin cruising in the Mediterranean this summer, is already encouraging, says Vago.

“MSC Meraviglia is currently our most booked ship in this region and represents 20% of our volume for 2017,” he says, adding that the Mediterranean has experienced a 30% increase in guests year on year.

Last year, MSC also signed a letter of intent with STX France to deliver four World-class ships, the first of which is set for delivery in 2022 with a second scheduled for 2024. Firm orders are yet to be signed, but the Brittany-based shipbuilder is expected to deliver a further two vessels in 2025 and 2026.

“It is a reflection of our constant commitment to innovation, as we will partner with STX France to design, yet again, a completely new prototype – already the sixth in our history,” Vago comments, reflecting upon the signing. “In fact, in yet another industry first, the new MSC Cruises World-class prototype will feature – among other highly innovative elements – a record-breaking futuristically conceived design that will make the ship a truly unique place to be at sea, while maximising the open-air space available to guests.”

MSC’s bulging order book underscores the organic growth curve the company is presently on, states Vago, and this doesn’t just include newbuilds. In 2015, the operator also gave its custom to Fincantieri to stretch four of its existing Lirica-class vessels.

As part of the €200-million Renaissance programme, Lirica, Opera, Armonia and Sinfonia – four of operator’s oldest vessels – have been cut in half and extended in the centre to increase their size. This allows the addition of new balconies, the renovation of common areas and the creation of more public spaces in general.

The stretching process takes just under two months per ship, according to Vago: “It takes about ten weeks once the ship moves into dry dock. The mid-ship sections are prebuilt and moved into place by trolleys, and then welded into place, which is not unlike welding on a newbuild.

“Meanwhile, subcontractors are ready to move on to the ship with furnishings and interior construction. It is all about coordination and planning. This operation has never been done before in dry dock, but if anyone can do it safely and successfully, it’s Fincantieri.”

Europe’s largest shipbuilders will be looking to capitalise on MSC’s well-publicised growth mode. When asked last year why most European cruise vessels are still built in Europe, Vago rhapsodised on the continent’s shipbuilding tradition.

“The European yards have years of engineering experience building luxury ships for the cruise industry – experience that is unsurpassed anywhere else in the world,” he said. “While bulker and container ships are all about assembling steel and design to maximise payloads, cruise ships are about elegance and memorable passenger experiences.

"Whether it is engines, navigational equipment, lighting or furniture, the European yards have a competitive edge that does not exist in the US or Asia at this time."

“Another factor that gives European yards an edge is the infrastructure of subcontractors that can meet the demanding schedules and requirements of shipowners. Whether it is engines, navigational equipment, lighting or furniture, the European yards have a competitive edge that does not exist in the US or Asia at this time.”

MSC Cruises’ latest orders are testament to a company that has come a long way since it first entered the cruise industry – in its current incarnation, in 1995. In its first ten years, the group was heavily dependent on financial support from its parent cargo-shipping line, Mediterranean Shipping Company, before its first newbuild, MSC Lirica, came along in 2003.

Then, the Lirica measured 56,000GRT with a passenger capacity of 1,500. Today, MSC’s sights are set on considerably larger vessels – and ambitions.

The 5,700-passenger MSC Meraviglia will become the largest cruise ship afloat in terms of passenger capacity when it launches in June 2017, and the biggest ship ever built by a European-based cruise line.

Under construction at Fincantieri, identical sister ship MSC Bellissima is also on order from STX France, scheduled for delivery in June 2019. Two more ships – dubbed Meraviglia Plus – will have an even greater passenger capacity of 6,300, and are slated to launch in October 2019 and September 2020.

The ships are designed for efficiency, with scrubber technology to neutralise carbon dioxide emissions. The ships will also be water-emission free. 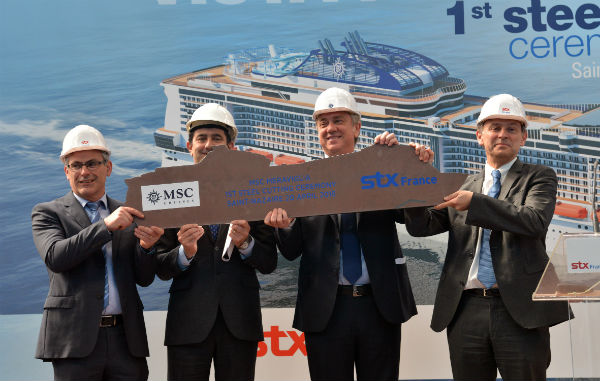 MSC Cruises sees the first steel for its Vista megaships cut at a steel-cutting ceremony at Saint-Nazaire, France, 2015. 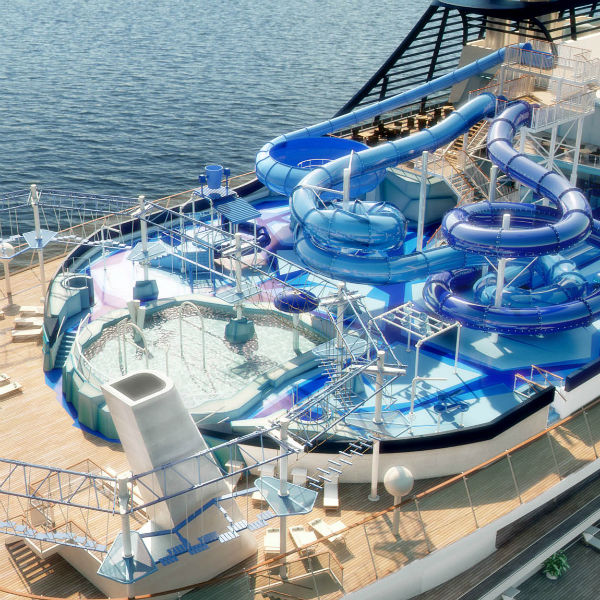 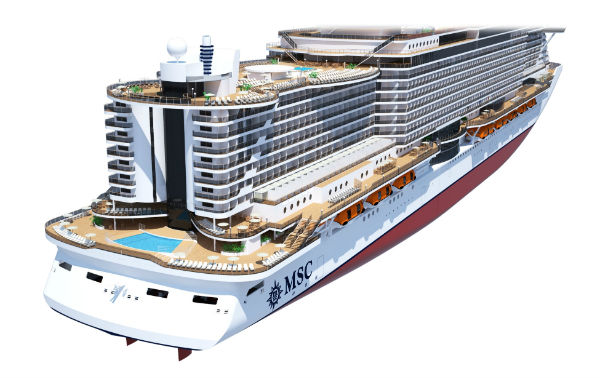 MSC’s Seaside class is thought to be the next step in innovative cruise ship design.
Post to: