A new agreement between GE Power and Fincantieri will see the two companies co-develop an emission control solution to reduce air pollution from cruise ships. Colin Castle examines how the new shipboard pollutant-removal system might work.

What do one of the world’s biggest shipbuilders and one of its most well-known energy companies have in common? Not a great deal, on the surface at least. But with an agreement signed in June 2017, Fincantieri and GE Italy now have a mutual goal: helping the maritime and cruise industry – long plagued by the difficulties of running a trillion-dollar business while staying environmentally friendly – cut its emissions.

First mooted in a memorandum of understanding signed in September 2016, the agreement commits the two companies to developing a new shipboard pollutant-removal system to help reduce pollution in the maritime business. It was a first-of-its-kind plan, according to Fincantieri CEO Giuseppe Bono. “In fact, no shipbuilder before had ever established a partnership to reduce emissions with a system manufacturer that is among the leaders in the area in which it operates,” he says. Bono is keen to stress the collaborative and long-term nature of the agreement. “This strategy, having cutting-edge research and innovation at its forefront, will allow us to further raise the bar of technology to the benefit of the cruise market,” he says.

Fuel-cleaning technology of the sort GE and Fincantieri are planning to develop is already common on many cruise ships. Carnival recently announced that it had spent $400 million installing new exhaust-gas- cleaning systems (EGCS) on 60 ships across its brands. The EGCS cleans the vessel’s fuel, reducing sulphur compounds and particulate matter – generally a more low-cost approach than replacing it with something different.

It’s no secret that the cruise industry has long had difficulty reining in the high emissions that some of the world’s largest passenger ships inevitably create. June’s agreement could be an important step forward in protecting the environment and human health. With the rapid growth of the business, as well as the vessels used by the major players, keeping fuel clean is crucial.

With the rapid growth of the business, as well s the vessels used by the major players, keeping fuel clean is crucial.

A November 2016 report from Naturschutzbund Deutschland (NABU), a German non-governmental organisation focused on conservation, painted a troubling picture of the environmental impact of the European cruise industry.

NABU argued that ships produced 3,500 times more emissions than land-based vehicles – and regulations weren’t keeping up. “The shipping sector is lagging far behind what’s going on land,” says NABU researcher Daniel Rieger. “Air pollution from ships is damaging global climate and human health.” NABU’s research was controversial. Many in the cruise industry argue that the group, which ranks brands on a scoreboard, defines environmental damage in very narrow terms, and say that the cruise businesses are not sufficiently consulted – or that their often billiondollar efforts are not given a fair hearing.

Much of the blame, Rieger argues, lies not with the industry, exactly, but with the regulators at the International Maritime Organisation (IMO) and their maximum permitted sulphur emissions for global shipping. In much of the world, he says, vehicles on land are not allowed to emit more than 10ppm of sulphur, or 0.001%. The cruise industry, however, has a much more lenient limit of 3.5%, and he does not see that changing anytime soon. “The IMO works so slowly that we have to wait at least ten or 20 years more until effective regulation will be in place,” Rieger says.

But change might come quicker than he expects. One stated goal from the GE Italy and Fincantieri plan is to be compliant with new regulations from the IMO. That’s certainly an ambitious timeframe for compliance. By 2020, the IMO says, shipping will need to significantly reduce the sulphur content of its fuel oil as part of the industry’s commitments under the international convention for the prevention of pollution from ships (MARPOL). “The reductions in sulphur oxide emissions resulting from the lower global sulphur limit are expected to have a significant beneficial impact on the environment and on human health, particularly that of people living in port cities and coastal communities beyond the existing emission control areas,” IMO secretary-general Kitack Lim has said.

The deadline was originally going to be set at 2025, to ensure that enough compliant fuel oil would be available. According to the IMO, there are two ways that ships can meet the new requirements. One way is to use low-sulphur compliant fuel oil. The second way is scrubbers, the organisation said in its announcement of the new rules, “An increasing number of ships are also using gas as a fuel, as it leads to negligible sulphur oxide emissions when ignited. Ships may also meet the emission requirements by using approved equivalent methods, such as exhaust gas cleaning systems or ‘scrubbers’, which ‘clean’ the emissions before they are released into the atmosphere.” With the shipboard pollutant-removal system, GE and Fincantieri are opting for the latter. The new limit is 0.5% m/m (mass by mass) – a significant reduction from the current rate of 3.5% m/m – but if one partnership is able to combine the complex technical needs of the new generation of ships with engineering and low-emissions energy know-how, it would be this one. GE Italy CEO Sandro De Poli says the June agreement made sense in the context of the companies’ history of collaboration in research and development.

The shipping sector is lagging far behind what’s going on on land. Air pollution from ships is damaging global climate and human health.

“To develop the shipboard pollutant-removal system, we will combine Fincantieri expertise and GE’s deep domain experience in air quality technologies for the reduction of pollutants in different fields, such as power, aluminium, iron and steel,” he says.

According to Fincantieri – which brings extensive experience in installing new scrubber technology to the table – the bulk of its work will be assessing how to reach these new low-emission goals while keeping costs down. “Fincantieri is actively committed to improving the quality of its products and will define the necessary technical requirements to design an emission control system for a vessel, including constraints and improvements to develop a competitive product,” the company said in a press release at the time of the agreement. “GE Power, with one of the most comprehensive portfolios to treat all main industrial pollutants for power and industry applications, and 80 years of experience in environmental control solutions, will define the features that are necessary for an emission control system, to help meet the target performances.” But what kind of difference will the GE-Fincantieri deal make, and might others follow suit? Marcie Keever is the legal director, and oceans and vessels programme director, at Friends of the Earth, and she insists that improving the quality of the fuel used by ships must be only the first step. “We are supportive of efforts to clean up ship fuel but believe that cruise ships are able to, and should take advantage of, available cleaner fuel,” she says.

Scrubbing, Keever argues, isn’t the best option: she suggests a marine diesel/distillate, which will be compliant with the 2020 requirements and reduce the risk of a spill of heavy fuel oil. “Even better, we believe cruise ships should be installing diesel particulate filters in order to clean up their emissions even further and be more protective of public health,” she argues.

For now, Fincantieri and GE Italy say it’s simply too early to go into great detail about the agreement. They are keeping their cards close to their chests and letting the promotional literature do most of the talking. But with three years to go, they’ll be working fast: the two companies hope that the new solution will even have a wider application in addition to reducing operational costs for clients. “While the system is being developed for cruise vessels, it is intended that it should be appropriate for all vessels using heavy fuel,” one Fincantieri representative told a trade magazine.

It’s hard to work out exactly what effect this might have on the industry as a whole. Fincantieri’s list of cruise clients reads like a who’s who of big name cruising brands: from Disney to Viking, Cunard and Carnival, the famous shipyard’s new know-how will be used on countless new vessels as of 2020. The Italian company likes to say that one in three cruise passengers travel on ships built at its facilities. If that means more customers travel on low-emissions vessels, the June agreement could have a major impact. 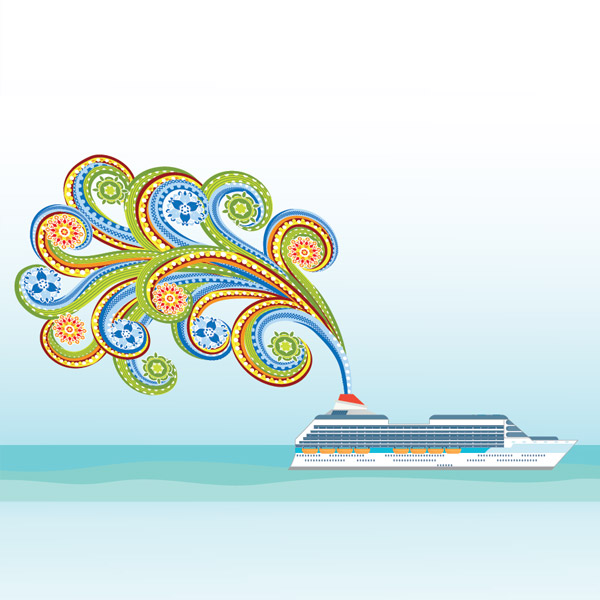 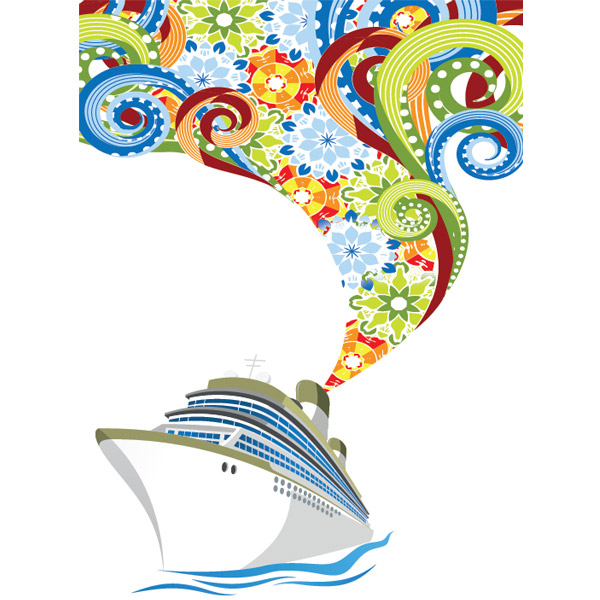 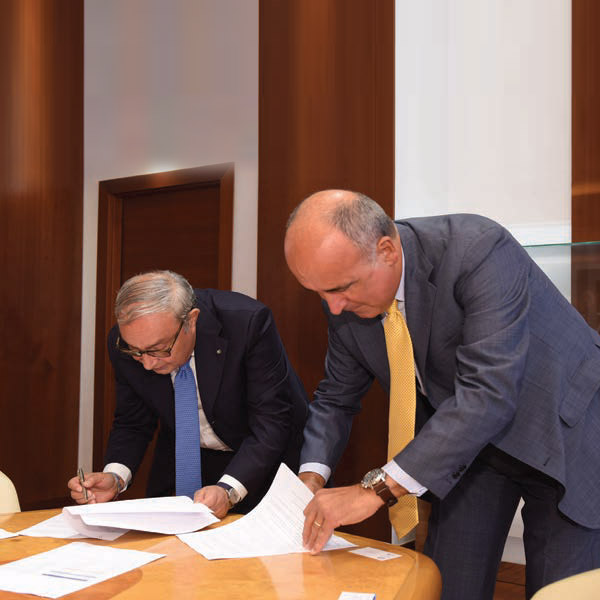 The memorandum of understanding to build the pollutant-removal system was signed by Giuseppe Bono, CEO of Fincantieri and Sandro de Poli, CEO of GE Italy.
Post to: