While significant challenges remain and alterations to operating models are required, how well positioned is river cruising, a sector that was booming pre-lockdown, to start building once again on previous successes? Will Moffitt speaks to Rudi Schreiner, co-founder of AmaWaterways, about resuming operations in the age of Covid-19, potential lessons for the sector’s seafaring cousins and the changes being made to ensure momentum is maintained.

As the early morning light streams into his kitchen in Westlake Village, California, Rudi Schreiner is speaking about two themes that have been doing the rounds of late: survival and travel. Fortunately, neither of us has used the dreaded ‘C word’ just yet.

In fact, the river cruise veteran and co-founder of AmaWaterways is telling me about his youthful wonderings that took him to Eastern Nepal as a gung-ho 20-year-old where he lived alongside the mountain-dwelling Limbu tribe and his 15-month excursion through the Amazon to conduct anthropological field research.

Both trips stood him in good stead for a successful career in the travel industry, particularly the latter, which instilled in him a love of seeing exotic cultures and locales by boat. It was there in the mosquito-ridden jungles of South America that Schreiner learned to build his first vessel: a raft constructed from scratch that was durable enough to last seven months cruising through the Peruvian section of the snaking river.

“We had boxes of machetes, we had six shotguns, we had thousands of fishing hooks and fishing lines, we had a lot of jewellery and stuff to trade. It was a fantastic trip,” Schreiner says. “I came back and I thought, ‘Well, I want to get into travel’.”

Get into travel he certainly did, founding Student Travel International in Los Angeles in 1982, which carved out a niche selling packaged student tours from the US to Europe, before working for Uniworld in the ’90s, developing routes and itineraries around the Baltic states as the Yugoslavian conflict intensified.

Soon after, the Main-Danube Canal opened, uniting the continent’s main arteries together, opening up 2,200 miles of river and the cities and towns along its banks to curious tourists. Schreiner could see the birth pangs of what would gradually become a burgeoning form of river travel, even if he didn’t always know quite where the actual boat was headed.

“There was a small European market prior to the canal. You had ships on the Danube and ships on the Rhine […] but it was short-distance cruises,” Schreiner says, laughing at an early attempt to design a 14-night Uniworld cruise from Budapest to Amsterdam. “I had no idea how much time it would take to go up river, downriver, navigate the locks. I had the whole river scheme taped up to a wall in my office.”

River cruising has come a long way since those early days of Baltic expansion, growing at a steady pace alongside its seafaring counterparts as a penchant for smaller ships and more educational experiences in intimate settings have turned it into a profitable niche. It has also become more luxurious and intrepid. Wealthier passengers can now cruise down the Ganges in five-star style, tour the Mekong with world-renowned chefs, or stop off for cognac-blending sessions in the French town of the same name.

Schreiner’s own company, AmaWaterways, which he co-founded in 2002, now delivers cruises in Europe, Asia and Africa and is one of a dozen or so global river cruise companies that had been growing steadily until Covid-19 had other plans.

Since the virus began spreading virulently in late February and early March, AmaWaterways has been kicked into what Schreiner describes as “survival mode”. Itineraries have been cancelled, staff in North America and London are working from home, those in Switzerland are essentially furloughed. Only one ship in the company’s 24-strong fleet is in operation.

Despite the severe disruption Covid-19 has caused, Schreiner remains confident and upbeat, arguing that amid the short-term financial setbacks the current circumstances could be beneficial to river cruising in the long-run, increasing the demand for small-scale excursions with fewer numbers of passengers on-board.

“We’ll get over the whole thing. The question is when, and I think river cruising will come out as a big winner because of this small environment, because of the nature of it,” Schreiner says. “You’re always moving through one country, and you’re always close to shore. If there’s any kind of incident, you can get off the boat very quickly.”

“We’ll get over the whole thing. The question is when, and I think river cruising will come out as a big winner because of this small environment, because of the nature of it.” While it’s too early to tell, it could be that the nature of river cruises puts them in an easier position to recover from the social and financial wounds inflicted by the pandemic. Most sail in one or two countries, lessening the impact of quarantine laws on business. Meanwhile, journeys are invariably shorter and swifter than their larger seafaring counterparts with far less passengers on board.

Early signs suggest this to be true. After all, with a majority of the world’s global fleet in warm lay-up it is via rivers that many of the first excursions since the pandemic have been made, as ocean-goers watch with keen interest to see how single or dual-country cruises fare in these testing circumstances.

Trendsetters in a trouble time

While it was the MSC Grandiosa that garnered most of the headlines when it left the Italian port of Genoa midway through August as the first ‘major cruise ship’ to sail in almost five months, it was not the first.

That accolade belonged to Nicko Cruises, which set sail at the turn of the month as 110 German passengers embarked on an 11-day Passau to Düsseldorf cruise, on the Rhine and Danube, albeit at reduced capacity to allow for social distancing, with strict safety and hygiene protocols on board. These included daily temperature checks, compulsory maskwearing in corridors and no pool, spa or gym access.

In Europe, others have followed suit, including Amadeus, A-Rosa and CroisiEurope, but Viking Cruises has suspended operations until later this year arguing that as things stand passenger safety cannot be guaranteed.

“Viking is a very different company today from when we started in 1997 with four river ships,” said chairman Torstein Hagen. “But one thing has not changed in the past two decades. Since Viking’s very first day, our commitment to the safety and welfare of all those on board our vessels and to our mission has never wavered.” “It’s an experiment in how to deal with the situation. You have to wear a mask when you move around the ship. We have plastic shields in the lounge, which you can barely see. So far everything seems to be working well.” Despite suspending other itineraries for the time being, AmaWaterways is experimenting; embracing this new form of cruising via the AmaKristina, which resumed operations on 5 July with two five-night itineraries from the Rhine to Amsterdam and Antwerp, the latter to Strasbourg.

Capacity – ordinarily at 150 passengers – is down to 100. Masks are compulsory for crew members at all times, while passengers are required to wear them in the restaurant and lounge areas. Daily temperature checks are conducted on both, while fan coil air-conditioning systems are specifically located in individual rooms to eliminate recirculation in cabins and public spaces.

“It’s an experiment in how to deal with the situation,” Schreiner says. “You have to wear a mask when you move around the ship. We have plastic shields in the lounge, which you can barely see. So far everything seems to be working well.”

The world on lockdown

Of course, with US citizens currently banned from entering EU countries, the European cruise market has taken a significant hit. With 85% of passengers based in North America, AmaWaterways has – for the time being – lost its main client base.

“We are still hoping that maybe towards the end of the year we get a few cruises in on the American market. But in general, [we] have written off the season already. We’ll start up again, mid-March next year,” Schreiner says.

Instead he points to the record number of bookings that have been taken for the 2021 and 2022 seasons, insisting that June was the company’s strongest month for new bookings ever recorded.

As with so many other sections of the travel industry, the river cruise market will mostly have to ride it out. However, it is also banking on capitalising on that renewed surge of interest, while at the same time navigating the pitfalls of cruising in the age of Covid.

In this new domain of 24/7 screening and sanitiser, failure to keep protocol will not only be financially destructive, but damaging to reputations in the long run as promises to keep customers safe must be met to win back the trust of clients old and new.

For Schreiner, it seems that cynicism has been helpful in the long run. As the river cruising market went from strength to strength, he was preparing for some kind of major disruptive event. Just not this one.

He cites instances from his early time at Uniworld when bridges were bombed in Croatia, cutting off the lower Danube to the upper Danube, and issues with terrorism and hijacking. Disruption is inevitable, he says. It just needs to be properly accounted for.

“Recently, my biggest fear has been that there would be such low water that we wouldn’t be able to cruise,” he explains. “So, I was preparing for a season without cruising, just not due to a virus.”

With the search to develop a vaccine ongoing, staff furloughed and most itineraries cancelled for now, this particular segment of the market will have to bide its time and hope that early attempts to cruise in an age of Covid-19 are successful. Schreiner remains wholeheartedly optimistic.

“I think river cruising really has a very, very bright future. The question is, how long will it take before we have a vaccine and so on. Either way, we will get through it. Even if we have to wait until 2021 […] we’ll stick to it and we’ll make it through.”

Current passenger capacity of the AmaKristina, down from 150 in order to provide safer conditions for those on board. AmaWaterways 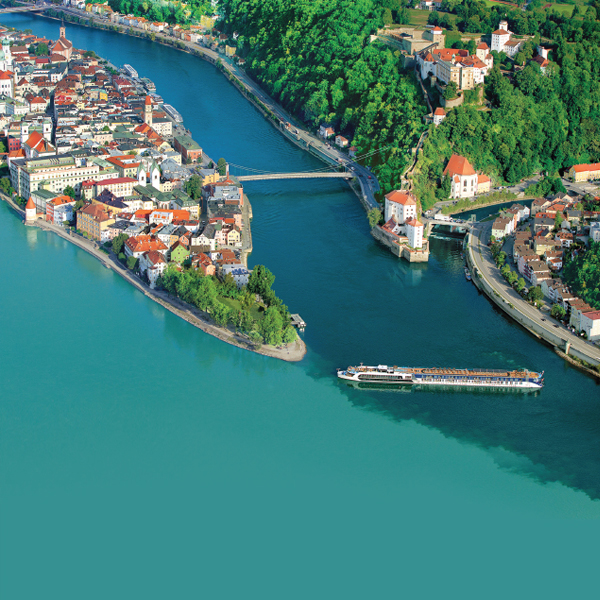 The AmaPrima travelling on the Danube in Vilshofen an der Donau, Germany. Image Credit: AmaWaterways

Upon resuming operations on 5 July 2020, AmaWaterway's AmaKristina reduced its passenger capacity, along with implementing a number of other anti-Covid measures. Image Credit: AmaWaterways 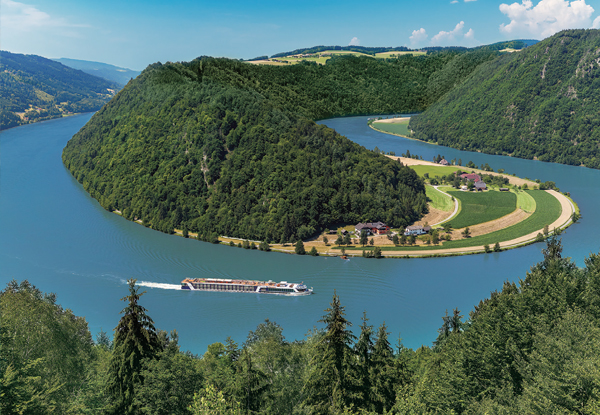 The Danube, a popular river cruise path ever since the Main-Danube Canal was completed in the ’90s. Image Credit: AmaWaterways
Post to: