Sailing to the biodiversity paradise that is the Galápagos archipelago is fraught with environmental dangers. Fortunately, Silversea is responding with a new green vessel that it hopes will allay those concerns and boost responsible tourism to the islands. Abi Millar talks to Fernando Delgado, vicepresident at Silversea, about the capabilities of the Silver Origin.

In 1835, a young naturalist named Charles Darwin set sail for the Galapágos Islands, an archipelago of volcanic islands 600 miles off the coast of Ecuador. His ship, the HMS Beagle, was homeward-bound after three years traversing South America.

“I am very anxious to see the Galápagos Islands – I think both the geology and zoology will not fail in being very interesting,” he wrote in a letter to his sister Catherine. He wasn’t wrong. The geology was singularly dramatic – rocky, arid and pitted with craters – while the climate was cool for an equatorial region. It was the wildlife, however, that really caught Darwin’s attention. He noted that every island was a “world within itself”, each playing host to different species. For instance, there were about 15 species of finch-like birds, which had different beaks adapted to different food sources.

“One might really fancy that from an original paucity of birds in this archipelago, one species had been taken and modified for different ends,” he wrote.

Darwin’s observations were to lay the groundwork for his theory of natural selection. Nearly two centuries later, the islands are indelibly associated with his name, with today’s visitors similarly excited to play naturalist. Here, they can see iguanas, sea lions and 500lb tortoises, to name a few.

For many of these visitors, the obvious means to see the islands is by boat, ideally aboard a cruise ship. This is not a new trend – the first such vessel arrived in 1934, and week-long cruises were being advertised by 1968. However, the tourism boom is a relatively recent phenomenon. The islands now welcome over 200,000 visitors a year, with ship-based tourism accounting for 75,000 of them.

One of the main operators here is Silversea, which launched the luxury expedition vessel Silver Galapagos in 2013 (it had previously belonged to Renaissance Cruises and then Conodros Cruises). Next year, that ship will be replaced by the even more luxurious Silver Origin, Silversea’s first destination-specific ship and purportedly one of the greenest cruise ships ever created.

“Compared with the Silver Galapagos, Silver Origin will have more advanced equipment and will be more energy efficient. It will be the most elegant ship to ever sail the Galápagos Archipelago.”

“Guests will enjoy a truly immersive experience in the Galápagos, forging a deep connection with the destination through both ship-based and onshore experiences,” explains Fernando Delgado, vicepresident at Silversea. “From the ship’s interior design to the content consumed on board, the cuisine served in the restaurants and the suites’ immersive qualities, many aspects of the cruising experience have been tailored to this unique archipelago.”

The new vessel, due to launch in summer 2020, is intended to allay concerns about what tourism is doing to the islands. Part of what makes the Galapágos Islands so special, after all, is their lack of human despoilment. The first settlers didn’t arrive until the 1800s, meaning its many endogenous species evolved in isolation.

2007–10
The years that the Galápagos Islands were on the list of World Heritage sites in danger, with concerns around pollution, fuel spills and poaching.
World Heritage

Unfortunately, over the years the islands’ status as a biodiversity paradise has come under threat. Tourism numbers are climbing, the resident population is growing 8% year-on -year and nonnative species have disrupted the delicate ecosystem.

Take goats – a surprisingly destructive adversary. First introduced by explorers and pirates, the Galápagos’s feral goat population grew rapidly, stripping the islands of vegetation. This meant less food for the native giant tortoises, the population of which had plummeted to 15,000 by the 1990s.

Following Project Isabela, which culled the goats, the situation has started to turn around. The main islands are now free of goats, pigs and donkeys, and vegetation levels are being restored. There have also been conservation efforts in place for years – 97% of the land mass is protected as a national park, and human settlements are restricted to specifically zoned areas.

However, this does not make the ecosystem any less vulnerable. Between 2007–10, the Galápagos Islands were on the list of World Heritage sites in danger, with concerns around pollution, fuel spills and poaching.

And with wear and tear increasing, a number of organisations are pursuing conservation projects.

As Delgado explains, the cruise industry is expected to follow tight regulations to minimise its impact on the environment.

“Silversea unlocks immersive travel experiences for guests with utmost respect for the destination, adhering to the strict rules set out by the Galápagos National Park at all times,” he says. “It is well proved that ships enable tourists to visit protected environments with low impact, with zero discharge of untreated waters and any other waste. Silversea is experienced in working in fragile environments and the cruise line’s procedures include the adoption of stringent protocols.”

He adds that the cruise line works hard to enrich the local environment. For example, it participates in certain conversation projects, financially contributes to relevant causes and places a strong emphasis on education. “We do this through the knowledge of local expedition experts and various educational programmes for the Galápagos’s residents,” he says. “All excursions from the ship are carried out under the supervision of local guides, who are authorised by the National Park authorities, ensuring that strict rules are adhered to.”

Guest-focused education is important. While there is no suggestion that Silversea guests have ever caused problems to the islands, there have been numerous reports over the years of bad tourist behaviour (think taking selfies with giant tortoises, collecting animal bone souvenirs or simply littering). Although conservation efforts are second nature for Galápagos residents, the same might not be said for certain visitors.

“Silversea is experienced in working in fragile environments and the cruise line’s procedures include the adoption of stringent protocols.”

While on board Silver Origin, guests will receive daily lectures and briefings, helping them further their understanding of the destination. With the highest crew-to-guest ratio (1:1.16) and the highest ratio of qualified guides per guest (1:10) in the Galápagos, personalised service will be paramount – and so too will environmental stewardship.

Before excursions, guests can socialise at the basecamp lounge and learn more about what they’re about to see. They can also visit the ship library, which will include the most extensive destination-focused collection Silversea has ever offered on one ship.

“Basecamp will be among Silver Origin’s most innovative spaces,” explains Delgado. “Connecting with the ship’s Zodiac embarkation area to represent the synergy between destination and ship, it will host educational activities, through which guests will be able to interact with the on-board expedition team to learn more about the rare wildlife, amazing landscapes and the captivating history of the Galápagos Islands, before and after experiencing these attractions first-hand.”

200,000
The number of visitors to the Galápagos Islands each year.
Galápagos National Park Directorate

The immersive nature of the voyage will extend to the cuisine, which will include local ingredients prepared by Ecuadorian chefs. Meanwhile, the interior spaces will take their cues from the Galápagos landscape, with regionally sourced materials, bright motifs and muted tones.

It is perhaps the ship’s technological underpinnings, however, that will play the biggest role in minimising damage. A small vessel, hosting just 100 passengers, Silver Origin is set to support feature systems and solutions especially designed for the Galápagos.

“With the environment in mind, the ship will feature a dynamic positioning system, which will be used when the ship is positioned over delicate seabed ecosystems to prevent the anchor from causing damage to the seabed,” says Delgado. The Silver Origin also “has an advanced waste water treatment plan, which will allow the vessel to discharge while in designated areas – fully compliant with the most stringent regulations. The ship will also meet the highest standards of energy efficiency in the segment.”

This is one of the areas in which Silver Origin has the edge over its predecessor. While Silver Galapagos has not exactly fared badly – it scooped the top spot in four categories at the 2019 Cruise Critic’s Cruisers’ Choice Awards – Silver Origin bills itself as more ecofriendly and aesthetically pleasing than anything that’s come before.

“Compared with the Silver Galapagos, Silver Origin will have more advanced equipment and will be more energy efficient,” explains Delgado. “It will be the most elegant ship to ever sail the Galápagos archipelago. Among various other enhancements and a first for Silversea, selected suite categories will incorporate an ocean-view bathtub, as well as an ocean-view shower that is accessible from the balcony for guests’ convenience and comfort.”

There are also a number of features in place which, while not Galápagos-specific, are eco-conscious in a more general sense. For instance, every suite will include a freshwater purification system that will convert seawater into drinking water, and each guest will be gifted a metallic reusable bottle (helping reduce the use of plastic on board).

“Silver Origin’s bathroom amenities will include bottles of 100% recycled plastic and 100% biodegradable products,” adds Delgado. “Once the bottles have been used, they will be sent back to the vendor who will recycle them. Reef-safe sunblock will also be available on the ship.”

Of course, for any tourism operator in the Galápagos, there is a certain paradox inherent to their mission – tourists want to see the islands precisely because they’re so unsullied by tourists. Silver Origin will aim to reconcile this dilemma, showing guests what Darwin saw without leaving any damage in its wake. 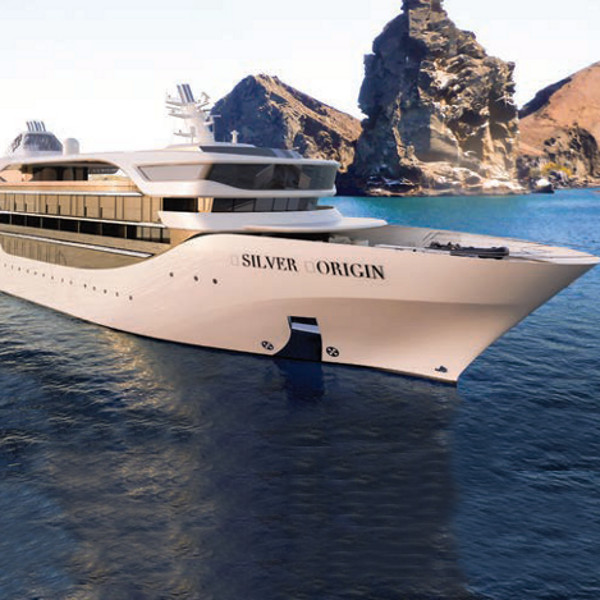 Silver Origin will have the highest crew-to-guest and qualified guides-per-guest ratio in the Galápagos. 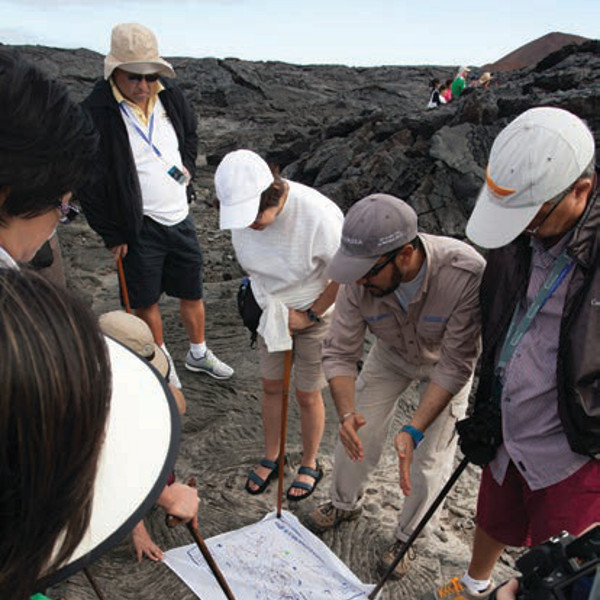 Excursions from the ship are carried out under the supervision of local guides. 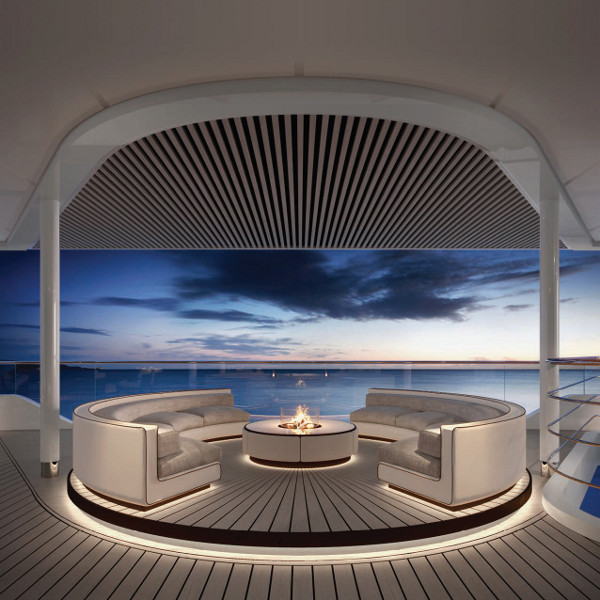 On board the chic, luxurious surrounds of Silversea’s Silver Origin.
Post to: