Entrance to China – inside Norwegian Joy

With its launch date looming, Norwegian Joy will be the latest instalment in Norwegian Cruise Line’s Breakaway Plus class, but the first to be tailored specifically for the growing Chinese market. How much of a design departure does this demand and how different is the finished product? World Cruise Industry Review investigates.

In line with the rise of its middle-class society and attendant disposable personal income, China is embracing cruising more than ever before. Recent figures published by CLIA bear witness to this: in 2015, the country’s cruise sector topped a million passengers – up from roughly 700,000 in 2014, making it the world’s fastest-growing major source market.

“We certainly expected to see record-breaking growth, but we are astonished at the rate,” CLIA president and CEO Cindy D’Aoust told ship-technology.com in October.

Unsurprisingly, some of the world’s largest cruise operators have sought to gain a foothold in this lucrative market. Last year, Royal Caribbean announced that its Ovation of the Seas would homeport in China, while MSC is set to deploy a second ship in China from May 2018.

Carnival Corporation, too, is looking to get in on the act, having last year signed a deal with Fincantieri and the China State Shipbuilding Corporation (CSSC) to build two new cruise ships at Shanghai Waigaoqiao Shipbuilding, the first of which could arrive in 2022. The agreement comes just a year after Carnival joined forces with CSSC and the China Investment Corporation to create a multiship domestic cruise brand in the Chinese market.

Not to be outdone, Norwegian Cruise Line is presently adding the finishing touches to Norwegian Joy – the group’s new €700-million vessel and the first to be designed with Chinese passengers in mind. The ship, which will join Norwegian Escape as the second vessel belonging to Norwegian’s Breakaway Plus class, is being built by German shipyard Meyer Werft. Weighing in with a gross tonnage of 163,000t, and a length and width of 325.9×41.4m, the vessel is scheduled to enter service in March.

Norwegian Joy will be based in Shanghai and Tianjin. The Chinese link is evident from afar; Chinese artist Tan Ping has designed the artwork to be featured on the ship’s hull, serving to underscore Norwegian’s commitment to the Chinese market.

A painter, printmaker and educator, Tan Ping straddles the worlds of art and design. His abstract paintings and copper-plate etchings are in the collections of such renowned museums as The National Art Museum of China; Portland Art Museum, US; Ludwig Museum, Germany; and The Shanghai Art Museum. He enjoys the distinction of having led and directed a team of designers from the Central Academy of Fine Arts to complete the 2008 Beijing Olympic Games Image and Landscape Design Project.

The rising phoenix for cruise

Tan Ping’s subject for Norwegian Joy is the phoenix, an iconic mythical bird believed to reign supreme over all birds of the world. It is a ubiquitous motif in Chinese art and can be found throughout the centuries in paintings, silk brocades and architectural flourishes.

"Chinese guests will discover an unmatched quality of service, cuisine, entertainment and retail experience on board Norwegian Joy. It is simply not available in the Chinese market today."

“The phoenix symbolises beauty and good luck in Chinese culture, and Norwegian Joy will bridge the West and the East to bring Chinese people’s best wish to the world, and everyone in her path,” the artist explains. It is just one element of a concerted effort to connect with a burgeoning demographic.

“Norwegian Joy has characteristics that are authentic to Norwegian Cruise Line and yet distinctively Chinese in all of its sensibility,” says del Rio. “With this new ship, Norwegian will unquestionably offer our Chinese guests a superior product, and introduce a new standard of innovation and excellence into the marketplace, with an unrivalled level of customisation for the Chinese consumer. It will perfectly suit what modern Chinese travellers value from an upscale cruise experience.”

“Chinese guests will discover an unmatched quality of service, cuisine, entertainment and retail experience on board Norwegian Joy. It is simply not available in the Chinese market today,” adds David Herrera, Norwegian’s senior vice-president and managing director for China.

The question is: just how different might this cruise experience be? With a capacity of 3,900 guests, Norwegian Joy will feature an exclusive, luxury complex, the Haven, which can only be accessed with a personalised key, and comes with a personal butler service, priority access to entertainment and dining, an enclosed courtyard, an observation deck offering a 180° view, gourmet canapés and premium beverages, and 74 suites.

A new accommodation category, the first at sea concierge level, will also be available aboard the vessel. Concierge staterooms will feature larger balcony rooms with en-suite amenities and a private bar, as well as a dedicated concierge service. Other accommodation will include minisuite, balcony, ocean view and interior staterooms.

A number of gastronomic options will cater to the Chinese clientele, including Shanghai’s Noodle Bar and Grand Tea Room, which offers high-end Chinese loose-leaf teas. The top deck will provide a two-level competitive racetrack – the first ever to be featured on a cruise ship. The venue will also offer an open-air laser-tag course.

The ship will provide a high-speed Wi-Fi connection and the fleet’s largest retail area, which will feature duty-free shops and high-end international brands – including Cartier, Omega, Bvlgari, Salvatore Ferragamo and Versace – in a bid to attract spendthrift holidaymakers. According to McKinsey & Company, Chinese consumers buy more luxury products than those in any other country, representing over a third of global sales.

In order to tailor the above to the mores of Chinese guests, Norwegian has partnered with local groups to further its grasp of Chinese culture. This led to the operator’s decision to go by a different name in the country, Nuò Wéi Zh?n, which translates as ‘promising, exclusive and authentic’.

To bolster its presence in the country, Norwegian has opened offices in Beijing, Shanghai and Hong Kong; they will support the group’s three brands, Norwegian Cruise Line, Oceania Cruises and Regent Seven Seas Cruises.

“Our China offices house a dedicated leadership team uniquely focused on ensuring the success of our local travel-agent partners, which is crucial to the success of our expansion in what will soon be the world’s second largest cruise market,” says del Rio.

“These offices will provide sales and marketing support to our travel partners whose customers wish to sail not only on our new China-based ship, but also on any of the incredible voyages around the world, offered across our portfolio of brands.”

In November, Norwegian also announced the appointment of ‘Mandopop’ star Wang Leehom as brand ambassador and ‘godfather’ of Norwegian Joy. Wang’s role will include a number of special appearances, including the traditional role of christening Norwegian Joy at the ship’s inauguration ceremony this summer, as well as other event appearances in the future.

"
"Sustainable sourcing is one of those incremental things that can add up and ultimately save a couple of percent per life source."

“As a Chinese star with a high international profile, connecting East and West through music and movies, Wang is the perfect godfather for Norwegian Joy,” del Rio says of the engagement.

Construction of the vessel, originally named ‘Norwegian Bliss’ but changed on account of the Chinese translation of “bliss” having negative connotations, began in September 2015. It has not been without its hiccups, however.

In September, a fire broke out on the ship. While no injuries were reported, Meyer Werft, on first inspection, estimated damages of €50,000. The following month saw another conflagration on its deck, although the Papenburg-based shipbuilder said completion of the ship was still on target.

In the interim, reports have surfaced that Norwegian Joy will visit Dubai on her repositioning cruise to China. Other ports of call on her maiden cruise, are, at the time of writing, unconfirmed.

Norwegian has not been short of accolades in recent years in the Caribbean and European markets, where it was last year voted the leading cruise line for the eighth consecutive year at the World Travel Awards. As it launches its new cruise offering, it will surely be hoping to add China to its list of successes in the coming years. 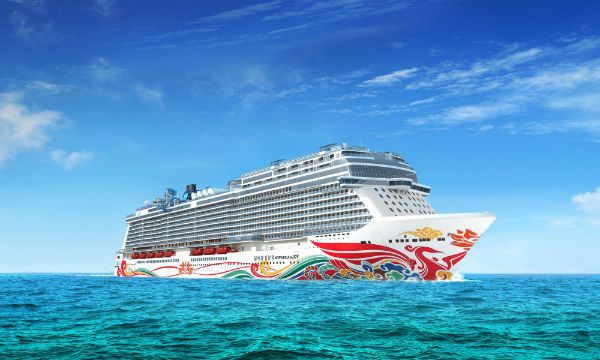