Initiatives like facial recognition check-in and personalised muster set Royal Caribbean’s approach to digital apart, but can its commitment to transforming the fundamentals survive perhaps the biggest crisis the industry has ever faced? Isabel Ellis asks Jay Schneider, the company’s senior vice-president for digital, how new smart technology can really be used to create lasting value.

A holiday is a fragile thing. With borders closing, airlines collapsing and ships around the world in quarantine at the time of writing, that’s more apparent than ever. Over the past weeks and months, the gradual, indifferent advance of COVID-19 has torn away the trips some families have spent years saving to make possible, while the unlucky ones have found themselves locked in cabins rationing handwash in the hope they’re not afflicted by anything more than homesickness.

Thankfully, it’s usually far more mundane matters that disrupt holidays. A key gets lost just when the lines at guest services are at their longest. There are pages of forms to fill out to get children into kids’ clubs, or in booking an excursion. Worst of all, some travellers have to give one of their precious days over to the often laborious process of simply boarding a ship.

“We heard from guests that they didn’t feel like they were on vacation until day two as a result of everything that we put them through,” admits Jay Schneider, senior vice-president for digital at Royal Caribbean. “That’s everything from the arrival experience – lines in the terminal, filling out paper, waiting to board – and then you’ve got this massive cruise ship that you have to go understand and learn. Then, right as you start to get comfy with a drink in your hand, we rip you out of the experience and throw you into a muster drill and move you about several times before you can get back to your day.”

Those issues have existed long enough to feel as much like cruise characteristics as bugs. The resolutely analogue muster drill might not seem like it falls under the head of digital’s remit, but, having already reduced check-in times from an average of 60–90 minutes to less than 10 with facialrecognition boarding, Schneider is leading Royal Caribbean’s campaign to fix the first day’s other big pain point. Personalised muster, as the company recently patented it, allows individuals and travelling groups to go through health and safety protocols at their own pace and convenience.

Compared with typical ‘mass’ muster procedures, the new programme breaks up the drill’s various components to make them feel like less of a stress or interruption. Guests can consult in-app and on- TV video guides on how to act in an emergency and use life jackets (staff are available for those who need extra support), while the task of locating and assembling at the relevant muster point can be completed at any time before the ship leaves port.

“I really believe that we’re thinking differently than the rest of the industry,” Schneider explains. “For me, customer service, customer experience transformation isn’t just kind of giving you an additive wearable to experience our product. It’s actually removing the pain from the experience and making it better.”

The word he uses is vacation, but Schneider has a sense of it as something holy for its own sake.

The sabbath doesn’t need new selling points. For him, technology can bring guests the most value by “keeping them out of lines and keeping them on vacation”. The disruptors are coming for disruptions.

Shock to the system

Or they were. Now, with the industry currently experiencing the greatest disruption it has ever known, initiatives like Schneider’s need to prove their worth. With the historic crashes in Carnival, Royal Caribbean and Norwegian stock prices through February and March, it’s clear that Covid- 19 has changed the calculation. Citizens of those companies’ great source markets are getting used to ‘hunkering down’ and ‘sheltering in place’, foregoing all but the most essential activities beyond the walls of their homes. As a purveyor of consumer-discretionary experiences that bring the US very little in the way of taxes, the industry can’t necessarily rely on the prospect of government bailouts getting it through.

Groups and individuals of all descriptions are currently having to make rapid decisions about what can and cannot be sacrificed. The same process has kept ships afloat during storms for as long as the two have met. With such ancient logic at work, digital initiatives look like the first and easiest cuts for cruise businesses, particularly when they neither decisively change the cruise experience for customers nor save money on staffing.

But you still need to get back to land once the storm is over. As similar technologies prove their worth in helping us map, respond to and live through the virus, whether in the form of capacitysaving telemedicine, contact-limiting remote working programmes or the data sharing capabilities by which everything is being coordinated, it’s equally clear that this is not the time to undervalue even the buzziest of big-tech buzzwords.

In that light, the cruise sector isn’t far behind healthcare in terms of how much it stands to benefit from digital transformation. It comes with his job title, but Schneider has a point when he emphasises the degree to which the industry is defined by data.

“For me, customer service, customer experience transformation isn’t just kind of giving you an additive wearable to experience our product. It’s actually removing the pain from the experience and making it better.”

“It’s the beauty of working on a cruise ship,” he explains. “We’re a hotel company, a food and beverage company, an entertainment company, a gaming company and a supply chain company. We’re all of that wrapped into one, plus our guests are with us 24/7, and our crew are with us 24/7. We were always data-rich, but we didn’t always leverage that data to improve both the guest and crew experience.”

In 2020, however, registering children for a kids’ club on either Celebrity or Royal Caribbean vessels no longer requires guests to fill out reams of paperwork. Instead, parents simply tap a card or use the cruise app. “We already know who’s in your cabin, we know who your kids are and we know who you are, so you don’t have to refill that information,” explains Schneider. “All we’re collecting from you now is the absolute minimum that we need.” Similarly, the company is testing a work application that collates information on guests’ bookings for their stateroom attendants, allowing them to schedule cleaning and cabin turndowns when they know it won’t cause any problems. “The cruise industry has done a really good job of creating lines and hassles over the past couple of decades,” says Schneider ruefully. “We’re trying to figure out how to remove them.”

There are plenty of examples for how not to do that. When Royal Caribbean first investigated the possibility of using facial recognition technology to expedite the check-in process in 2016–17, the best comparisons were at airports. London Heathrow was one of the leaders, but its solution wasn’t quite what Schneider was looking for. “You basically go into this cattle chute, the door shuts, you put your face into the machine and it either lights up green or red,” he explains. “That’s the absolute worst thing we could possibly implement because it doesn’t feel like you’re going on vacation – it feels like you’re having a colonoscopy.”

Another illustrative comparison with the Royal Caribbean approach is the use of ‘intelligent chat bots’ by brands looking to cut costs on providing customer support. One of Schneider’s favourite examples is used by Domino’s Pizza. “If you get the wrong pizza and you chat with a chat bot to say, ‘I’ve got a problem with my order’, it tells you to call the store,” he explains. “Then when you ask for the store’s number, it tells you to call the store. You’re stuck in this cycle of unhelpfulness.”

Rather than using automation to cut costs and corners, which, in the long run, is as likely to harm a company as help it, Schneider emphasises investing in technology that reinforces Royal Caribbean’s core offering as a hospitality provider.

“We didn’t want to introduce more speed bumps,” he continues. “It’s about rethinking the process, the interaction between people, the flow of people and leveraging technology to smooth that out. We didn’t want to remove our employees from that experience.”

It’s this focus on the fundamentals of hospitality that Schneider believes turns digital innovation into hard value for cruise businesses, alchemising investments into positive economic outcomes. Furthermore, cutting back digital spending as consumers of all ages embrace remote working and video communications technologies more wholeheartedly than ever before might create costly shortfalls in the future.

Sure enough, some of Royal Caribbean’s best results have come from its facial recognition check-in terminals, which have dramatically reduced queue times, even for those who don’t opt in to use them. “We talk about our experience being better,” thrills Schneider, “but where it really makes a difference is that the terminals that have our streamlined, friction-free expedited arrival experience are the highest-performing terminals we’ve ever seen from a satisfaction standpoint. So, you know, if you remove friction and truly transform the customer experience, you see the impact in data.”

He can’t yet point to the same weight of data for personalised muster, but Schneider also believes that the tests Royal Caribbean was able to run on Symphony of the Seas before sailings were suspended, showed that the approach was more effective, as well as less disruptive. He quotes feedback like, “I’ve sailed on 30 different ships, not just yours, and this is the first time I finally understood what to do in case of an emergency”.

As impressive as all that might be, Schneider was actually most surprised by the success of Royal Caribbean’s own chat bot. Last summer, despite his scepticism, a test on Allure of the Seas allowed app users to ask the ship itself informational questions. “We literally toggled the feature on,” he says, “and unprompted, unpromoted, 20% of guests engaged with it, which floored us. We expected 1–3%.”

That original bot was only able to answer around 75% of queries, but having partnered with Microsoft on a new platform, Schneider is confident of reaching 90–95% on the next trial, with the remainder answered by ‘human-in-the-loop’ attendants. That test began on Allure of the Seas shortly before sailings were suspended. Symphony of the Seas was supposed to host the next personalised muster test a few days later.

Schneider calls this a “test, adjust and scale approach”, with different initiatives trialled on different ships before being extended across class, brand and fleet, an “expanding universe”. As markets and horizons shrink, his job now is to protect that momentum. 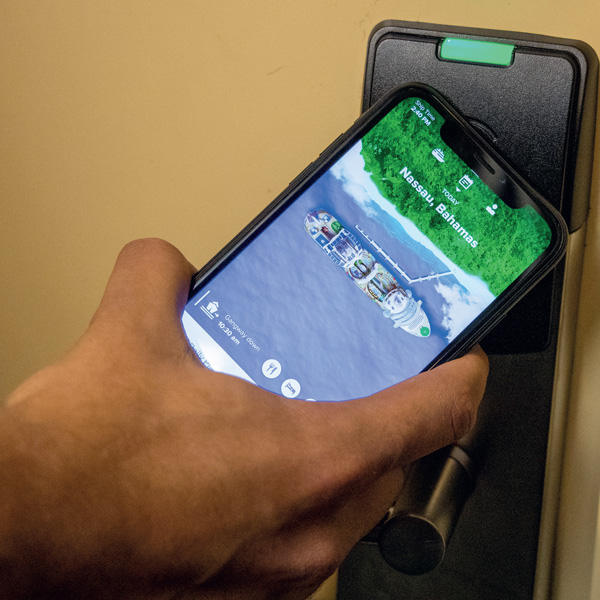 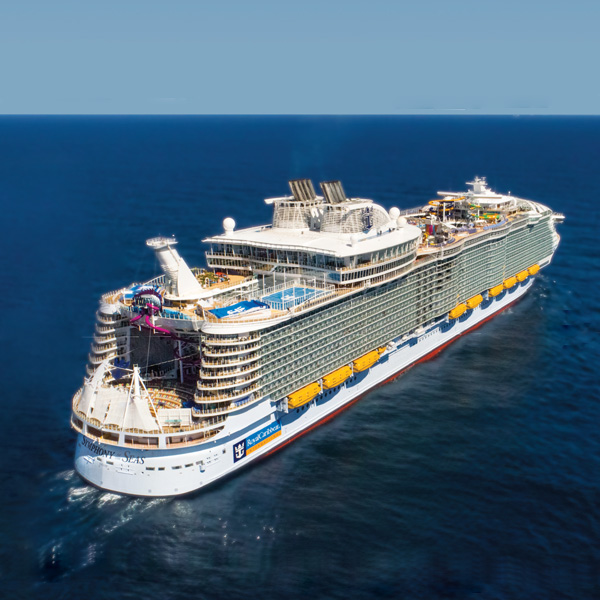