Over the past three years, Celebrity Cruises has shaken up its entertainment offering. CEO Lisa Lutoff-Perlo and associate vice-president of entertainment Becky Thomson-Foley discuss what the changes have meant for the brand, and explain how the new Edge class of ships is poised to create still more industry disruption.

When Celebrity Cruises’ latest ship, Celebrity Edge, sets sail next year, it will represent a real watershed moment for the brand. Long positioned as a forward-thinking cruise line – its tagline is ‘Modern Luxury Lives Here’ – Celebrity has undergone major changes since 2014, when CEO Lisa Lutoff-Perlo took the helm.

Already, she has overseen the refurbishment of several ships, launched a new global branding campaign and appointed the industry’s first American female ship’s captain, Kate McCue of Celebrity Summit. However, it is through the new ship that Lutoff-Perlo’s vision will be realised in full.

“Although I have been with our company for over 32 years, I don’t believe that things should stay the same – if they do, you are actually going backwards,” says Lutoff- Perlo, who has served in a number of roles over more than three decades across the Royal Caribbean stable. “No one wants to take their vacations on brands that are standing still, so I think our industry is ripe for smart disruption.”

The first of five ships in the new Edge class, Celebrity Edge has been billed as ‘revolutionary on every level’. It will feature designs by Kelly Hoppen and Tom Wright, villas with private plunge pools, and ‘Infinite Veranda’ staterooms that seamlessly merge balconies and living areas.

But the ship’s disruptive potential arguably becomes most obvious when you look at the guest experience. In a bid to cast a wider net to attract cruise ship passengers, Celebrity Edge will offer services and amenities unlike any that have come before.

“Celebrity Edge amplifies our modern luxury brand in a very powerful way,” says Lutoff-Perlo. “We have raised the bar for the cruise industry and are enticing those who have never been on a cruise before to fall in love with, and book, Celebrity.”

Before assuming her current role, Lutoff-Perlo was executive vice-president of Royal Caribbean International. Here, she oversaw the development of the Quantum class, which was notable for its multiple industry firsts. These included a 300ft-high observation pod and a skydiving simulator.

These features might seem like a risk in what is, after all, a relatively conservative industry. At a time when other cruise lines are still boasting of their classic décor and white-glove service, the wind tunnel and ripcord may start to look like one innovation too many. Lutoff-Perlo, however, was credited with helping the brand court a new customer demographic. With a median age of 42 – considerably younger than the industry average – the typical Royal Caribbean passenger is not expecting formality and silver service.

It’s an approach she has carried with her to Celebrity, which, in a bid to attract ‘affluent adventurers’, has overhauled its entire entertainment offering. “There’s nothing left of our programme from three and a half years ago – Lisa has enabled us to completely disrupt everything we did,” says Becky Thomson-Foley, associate vice-president of entertainment at Celebrity. “Over the past three years, we’ve stopped focusing on ‘dinner and a show’, ‘dinner and a show’, which is what Celebrity used to do in the past. We’ve looked at how we make the entertainment happen all around you.”

Thomson-Foley is loath to discuss Celebrity’s passengers in terms of age or demographic profile, preferring to talk about lifestyle and mindset. Their defining characteristic, she says, is that they are looking for something different from the norm. This has informed her own approach to programming: rather than taking her cues from other cruise lines, she sought inspiration from entertainment trends that are popular on shore.

I’m very proud that when you step onto one of our ships you don’t hear the Electric Slide, you don’t see line-dance classes, you don’t just get afternoon trivia – it’s a lot more meaningful and in-depth.

“I went across all the key entertainment areas, particularly New York, Las Vegas and London, to see what affluent, adventure-seeking people are going after,” she says. “What I realised was [that] the guests of Celebrity aren’t looking for a top-hat-and-tails show. They want depth, purpose, meaning and enrichment behind everything they experience on board our ship, and that has to cross over into entertainment. Maybe our guests are doing archery or bocce or muted meditation or a silent disco.”

This is not to say the nightly show – long a mainstay of cruise ship programming – has been phased out altogether. Instead, it has been rejigged. Over the past few years, Celebrity has stripped away all its existing productions and replaced them with new ones, opening a record-breaking 18 shows in 18 months. Each one was created in-house, with scenery, choreography, costumes and staging designed from scratch.

Then there are the experiences happening elsewhere on the ships, ranging from jazz parties to destination speakers. “I’m very proud that when you step onto one of our ships you don’t hear the Electric Slide, you don’t see line-dance classes, you don’t just get afternoon trivia – it’s a lot more meaningful and in-depth, and it really matches who our guests are,” says Thompson-Foley. “Until four years ago, we hadn’t won an award in entertainment and we now have 12, so our guests are starting to see it too.”

Like the brand’s other vessels, Celebrity Edge will take a holistic view of entertainment, treating it as inseparable from the overall guest experience. From Lutoff-Perlo’s perspective, it was important that the designers and the entertainment team weren’t working in separate bubbles.

“One of the things Lisa has done is to ensure that the operations team, entertainment, F&B and housekeeping have all been part of the design process,” says Thomson-Foley. “Instead of the design team creating something, and bringing us in afterwards, we’ve actually worked alongside each other. That’s what makes us different – it’s a completely cohesive space and experience that blends beautifully together.”

This approach is perhaps best typified by Eden, a three-deck lounge with café, restaurant and bar. Purportedly evolving from ‘chillful to playful to sinful’ over the course of the day, the space will play host to sitar players, aerialists, cooking demos and didgeridoo beatboxers among others. Its design, by Scott Butler of Wilson Butler Architects, is based around the Fibonacci sequence, with a spiraling walkway giving rise to a choreographed succession of experiences.

“Eden is performance art,” says Thomson-Foley. “It’s a little bit brave, it’s non-traditional theatre, it’s multisensory. We’ve always been a culinary brand, so how wonderful that entertainment now works alongside culinary, not just in designing food or performance for the spaces, but in delivering that to our guests in a unique way.”

The ship will also feature a resort deck that includes an adults-only pool and rooftop garden, and an ingenious venue dubbed the ‘Magic Carpet’. This is a cantilevered platform that slides between decks, and will change location from restaurant to poolside lounge to embarkation point, depending on where it lands.

“The resort deck and the Magic Carpet are particularly exciting for me, because these aspects enable our guests to view and engage with the land and sea in a way that has never been possible before,” says Lutoff-Perlo. “The outward-facing guiding principle of designing Celebrity Edge really comes through in these areas.”

Essentially, what this means is that the sea is on display as much as possible. Eden, for instance, features floor-to-ceiling windows, and the Infinite Veranda staterooms can be expanded right to the water’s edge. This instills a sense of theatre, quite apart from the ship’s entertainment offering.

As Thomson-Foley explains, the look, feel and function of the ship can’t really be considered in isolation. When she meets with potential entertainment partners, she gives them a test, showing them not a designated entertainment venue, but the ship’s largest suite.

“The reason I do that is that I know immediately whether they’re the kind of person we want to work with,” she says. “If they’re not interested, I know they’re only focused on creating a cruise ship show, but if they’re blown away I know they have an eye for designing entertainment, not just producing it.”

The guests of Celebrity aren’t looking for a tophat- and-tails show. They want depth, purpose, meaning and enrichment behind everything they experience on board our ship.

With over a year to go until its maiden voyage, Celebrity Edge is still in its early stages of development, and there are many features yet to be revealed. That said, excitement is already mounting. Malala Yousafzai, whom Lutoff-Perlo calls an “honest to god hero”, has been named as the ship’s godmother, and bookings have been open since March.

“I am a strong believer that brands need a purpose, and ours at Celebrity Cruises is to open up the world for all who encounter our brand,” says Lutoff-Perlo. “In one sentence, my vision for Celebrity Cruises is purposeful, inclusive, inspirational, and transformational – all done by leading from the front. We will do that, and more, with Celebrity Edge launching December 2018.” 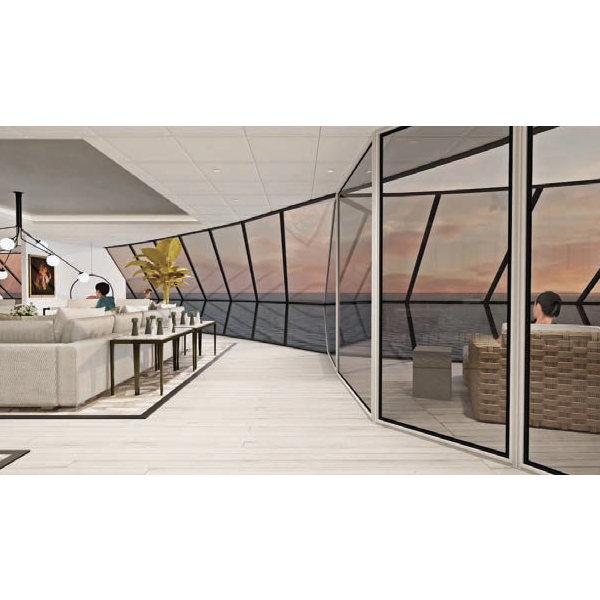 ‘Infnite Verandas’ and other design touches aim to give Celebrity Edge’s passengers a closer sense of the sea and the sky while on board the ship. 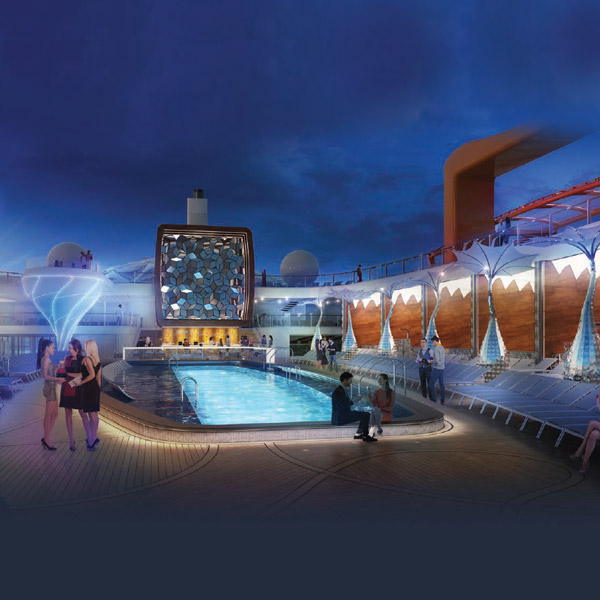 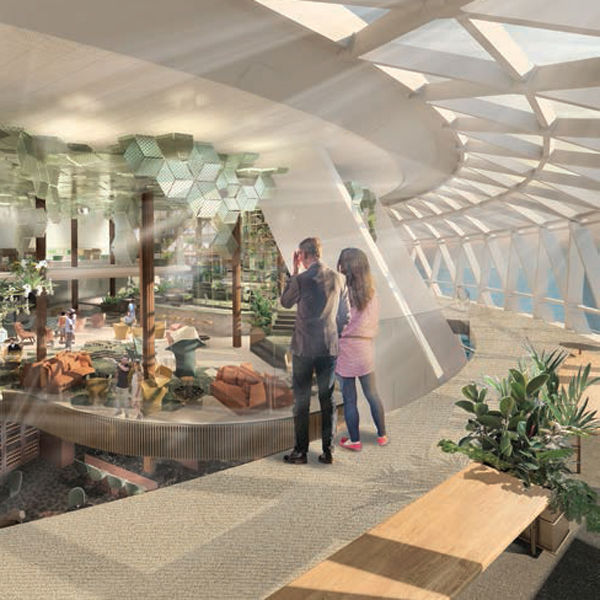 The ship is designed to offer guests a feast for the senses. 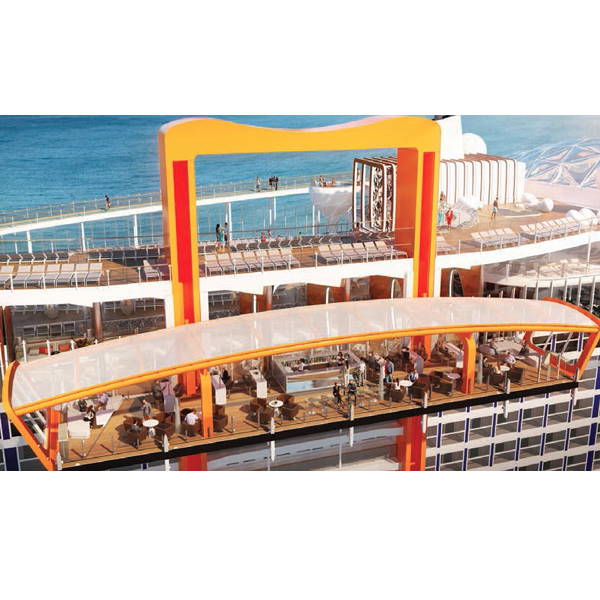 The ‘Magic Carpet’ is a movable platform that can slide from deck to deck.
Post to: