Specialist shipbuilders feeling the squeeze from struggling oil prices have begun expanding into the cruise sector, but what services are they offering? How difficult a transition might it be? And should established yards have cause for concern? World Cruise Industry Review speaks to experts from across the industry to find out.

As elements of the shipbuilding community reliant on the offshore oil and gas sectors continue to deal with a depressed market – caused by falling energy prices and overcapacity, mainly due to vessel construction in Asia – a number of players have found themselves fighting for survival.

The past decade has demanded many shifts in strategy, kicking off with the fallout from the 2008 global financial crisis, where a severe drop in oil prices, driven by a financial downturn on a scale not witnessed in the West since the Great Depression, led to a major decrease in offshore vessel orders. While many companies were able to continue operating as oil prices recovered and fast-growing economies helped drive growth, the collapse in oil prices that started in 2014 has been far more challenging to overcome, resulting in idle ships and thousands of job losses. An OECD report notes that 7,300 jobs were lost in Norwegian shipping companies alone in 2015, and, according to Clarksons Research, the global order book shrank by 25% in 2016.

With a decrease in fresh orders, many offshore shipbuilding companies are using their expertise to break into other sectors and a number of those have not failed to notice just how well the cruise sector is doing right now. With a core market in offshore support, subsea vessels, and specialised solutions for the offshore oil and gas industry, Fincantieri subsidiary VARD took the plunge and started to develop products for the cruise sector in 2015.

In February 2016, the company publicly announced its new diversification strategy in the areas of energy (specialised vessels for oil and gas, and emerging offshore energy industries), seafood (vessels for the fisheries and aquaculture industries), security (vessels for securing and monitoring the seas), and, most intriguingly, adventure (luxury cruise expedition vessels for polar and exotic environments). Cruising was suddenly a core component of the overall business model.

“The need to diversify arose from the downturn in our core market for offshore vessels,” acknowledges Holger Dilling, executive vice-president for investor relations and business development, Asia, at VARD, which designs and builds its specialist vessels across nine locations in Norway, Romania, Brazil and Vietnam. “Exploration cruise vessels are a market niche that is currently experiencing a boom, which fits well with VARD’s experience and capabilities to design and build technologically advanced, high-end, highly customised ships, in the size class approximately between 100 and 200m.”

Initially, at least, this diversification strategy, looks to be succeeding. Despite an ongoing lack of new orders from the offshore industry, VARD’s order intake for 2016 was its highest in three years. At the end of 2016, the order book showed a year-on-year increase of 12 vessels and, overall, was worth $16.15 billion, up from the 2015 figure of $13.06 billion.

Dilling explains that VARD’s new orders include six firm contracts for the design and construction of exploration cruise vessels. These include four from French luxury cruise company Ponant, announced in March 2016, and two from TUI/Hapag- Lloyd Cruises, announced in May 2016. And the orders continue to come in. This September, the company announced a contract for the design and construction of one cruise vessel for Coral Expeditions of Australia. The vessel is specially designed for small-ship expedition cruises to remote and exotic destinations in the Asia-Pacific region, and measures a total length of 93.5m, with a beam of 17.2m and a guest accommodation capacity of 120. True to the Coral Expeditions business concept, the ship environment is geared for daily shore expeditions, lectures and briefings. Delivery is scheduled from Vard Vung Tau in Vietnam in the first quarter of 2019.

With expedition itineraries thriving in the cruise industry from Alaska to Australasia, demand for basic and luxury smaller vessels that can navigate far-flung waters has continued to increase over the past few years. And the more niche shipbuilders are particularly well positioned to draw upon previous experience to build them.

Travelling by ship can be the best mode of transport to reach some of the more intimate and adventurous destinations, such as Antarctica, Myanmar and the Arctic.

“Travelling by ship can be the best mode of transport to reach some of the more intimate and adventurous destinations, such as Antarctica, Myanmar and the Arctic – and cruise lines are using this fact to tap in to new audiences,” says Adam Coulter, UK managing editor of Cruise Critic, the world’s largest online cruise resource.

Each of the four ‘ice class’ expedition ships for Ponant are 131m long, can accommodate 180 passengers in 92 cabins and include a range of luxury facilities. They will almost double Ponant’s fleet when they are delivered in 2019. The vessels for Hapag-Lloyd Cruises are designed for cruises in the Arctic and Antarctica, as well as tropical destinations such as the Amazon. They are 138m long, can accommodate 240 passengers and include a water sports marina, modern spa and fitness areas.

“This project is fully in line with our diversification strategy to enter the expedition cruise market, realizing synergies and increased cooperation with our majority owner, Fincantieri,” says Roy Reite, CEO and executive director of VARD.

But this goes well beyond leveraging a relationship with Fincantieri, one of the undisputed giants of cruise shipbuilding, and Reite is certainly not alone among his peers when it comes to diversifying strategy. Renowned for its X-Bow hull design, which eliminates slamming from head seas and improves on-board comfort, Ulstein is another offshore shipbuilding expert that has already demonstrated a strong commitment to enter this booming sector.

“Based on our nearly 100 years of maritime experience, with experience gained, in particular, from offshore vessels in recent decades, Ulstein Group wishes to expand into new segments where we have not yet made our mark, such as exploring, cruising and patrolling,” says Tore Ulstein, deputy CEO of Ulstein Group, who adds that there is a growing desire to explore and cruise the seas.

“Exploring, cruising and patrolling are three different segments that can all be developed on the basis of our offshore experience,” he adds. “They all belong to the same design family and can share cross-conceptual graphical elements, such as vertical windows on parts of the bridge, accumulation and storage of renewable energy, and alternative materials.”

Ulstein Group first presented illustrations of cruise ship designs based on the X-Bow hull-line design around two years ago and recently presented a portfolio of X-Bow and conventional vessel designs ranging from 100 to 185m in length. The company currently has a new-build order book consisting of large passenger ferries, yachts and vessels operating in the renewables sector, as well as an upgrade to expedition cruise vessel the Sea Adventurer, owned by Adventurers Partner and operated by Quark Expeditions. This will include renovations to the ship’s interior, technical upgrades, such as the replacement of main engines and gears, as well as the addition of new passenger cabins.

Ulstein has also committed to providing a design and equipment package for the construction of four expedition cruise vessels to SunStone Ships, a Florida-based passenger vessel tonnage provider, and China Merchants Industry Holdings. There is an option for a further six vessels that also sees Finnish contractor Makinen responsible for cabin assembly and all interior spaces. These vessels will feature the X-Bow hull design, patented by Ulstein, that aims to reduce fuel costs, improve safety and make life on board more comfortable for passengers, especially in rough seas.

Exploring, cruising and patrolling are three different segments that can all be developed on the basis of our offshore experience.

“For generations, we have delivered ship designs to service oil and gas installations in the world’s harshest sea areas, and the knowledge of how the weather can impact the vessel is of great value when developing designs and solutions for the cruise industry,” explains Trond Skodjevåg Bø of Ulstein Verft. “The X-Bow hull cuts through the waves and, with a soft entry into the sea, the slamming will be eliminated. This means that the abrupt stops, noise and vibrations that can be experienced on other types of vessels are minimised and negligible on these vessels.”

While a large number of shipbuilders continue to battle the storm from the oil and gas industry downturn, it is widely believed that the price of oil has recovered from its lowest point. Whether we will ever see a return to pre-2014 levels, however, is far less clear and the industry is divided on the timing of the market’s upturn. Those diversifying into new areas, such as expedition vessels in the cruise industry, are far more likely to experience calmer waters and growth in their order books in the meantime, but this should not be seen as a temporary measure while all parties await a return to the status quo. “The market for this type of vessel is still very active, so there are likely to be more opportunities going forward,” concludes Dilling.

With new ship orders in the cruise sector at an all-time high, and demand for a more niche expedition cruise experience, requiring smaller, specialist vessels, showing no sign of abating, these relatively new arrivals within the sector look set to stick around for some time to come. 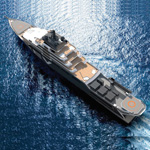 A research vessel design from VARD. 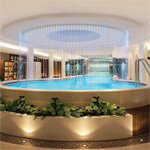 An interior design for a spa from YSADesign. 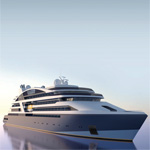 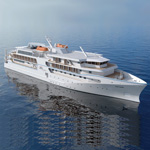 One of the designs for Coral Expeditions by shipbuilder VARD.
Post to: