As the tides turn, things we never expected to see have come about in the wake of Covid-19, with noted rivals Royal Caribbean and Norwegian Cruise Line Holdings teaming up to combat the pandemic’s effects on their operations. Gary King explores how this unprecedented event is upturning industry norms, the actions cruise lines are taking to respond to this invisible threat and what post-pandemic cruising could look like.

Throughout history, whether in the midst of catastrophe or with its ghostly spectre lurking on the horizon, important figures have come together in the form of conferences and summits to tackle global crises. These meetings between powerful nations, corporations and individuals have shaped fate and fortune: giving rise to treaties, geographical shifts, economic bounties, and political and commercial allegiances. Recent months have seen these gatherings held in government offices, company boardrooms and via Zoom, as the threat of Covid-19 has brought fierce political and commercial rivals under one socially distanced roof to discuss how best to adapt to a virus few saw coming, and fewer still anticipated quite how drastically it would reshape daily life.

In July, the cruise industry had its own ‘Potsdam’, as Royal Caribbean Group and Norwegian Cruise Line Holdings joined forces to develop the enhanced cruise health and safety standards in response to the global pandemic. The Healthy Sail Panel saw CEOs, former political advisers, heads of international humanitarian organisations, esteemed medical professionals and world-renowned epidemiologists cluster together – but not too closely – to discuss how cruise lines can best facilitate an environment that is safe for passengers and staff to work in.

The move is perhaps the most public example of a broader trend across the industry, as cruise lines – big and small – seek scientific and medical expertise to help protect passengers and staff from this invisible threat. With efforts to create a vaccine still ongoing and epidemiologists disagreeing on how best to avoid infection, doing just that is no small feat.

“We know that the public health issues that must be addressed are complex, and in some areas, tackling them will require novel approaches,” said Scott Gottlieb, former commissioner of the US Food and Drug Administration (FDA) and co-chairman of the Healthy Sail committee in a public statement. “Our goal in assembling this team of leading experts was to develop best practices that can improve safety and provide a roadmap for reducing the risks of Covid-19.”

A time for action

It goes without saying that the need to safeguard operations is now a matter of life and death for the global cruise industry, as causalities were sustained aboard vessels in February and March. Diamond Princess, quarantined off the coast of Japan, was the first to become infected and, according to data from Johns Hopkins University, 14 out of the 712 infected on board the vessel died. Meanwhile, a sister ship, Grand Princess, stationed off California, had 78 passengers testing positive for Covid-19. For the US health agency, such incidents – among others – were enough to trigger a ban on all cruise lines sailing around US waters.

With a 338-strong global fleet of ships docked, the cruise industry as a whole is working flat out to adapt to the virus, developing strict hygiene and safety guidelines so that operations can be resumed. Doing so will require strict protocols to protect a loyal clientele of vulnerable elderly passengers while at the same time remaining flexible enough to accommodate younger passengers and families.

Naturally, the default intention for many is to get things back up and running as soon as possible, albeit not quite as they once were. After all, as chief executive of Norwegian Cruise Lines, Frank Del Rio, has noted, maintaining the confidence of passengers on-board is “going to be a constant effort for a long, long time”.

Speaking during a Travel Weekly webcast, Del Rio claimed the cruise line was “going to deploy the gamut”. “We’re going to throw the kitchen sink at this,” he said. “This virus evolves and we’re learning a lot of things every day so we want to make sure that we have every single base covered.” Invariably, not all cruise lines have decided how best to approach such a complex problem and industry body Cruise Lines International Association (CLIA) is yet to release its own set of guidelines to that effect at the time of writing. Nevertheless, a gentle investigation of some of the more transparent forms of restructuring carry some clues as to what cruising in an age of Covid might look like.

Norwegian’s new fleet-wide ‘Sail Safe’ policy indicates that passengers can expect medical-grade air filters, regular temperature checks and social distancing. Vessel capacity will be significantly reduced to ensure social distancing can be maintained, a pattern that will be replicated across the industry with ships capped at less than 60% passenger capacity. The staple self-service buffet will make way for good old-fashioned table service. Others might consider that too risky, eradicating any form of interaction and opting instead for a digitised menu service, enabling guests to order food and drink from their mobile phones.

In a similar vein to hotels and airports, digital experimentation looks set to redefine the guest experience even before vessels have left port. Hong Kong-based Genting Cruise Lines, a subsidiary of the Malaysian Genting Group, is one of multiple operators toying with the prospect of remote checkins to reduce queuing before vessels set sail.

Once check-in is complete, passengers will be met by a barrage of screening checks, with doctors’ notes required for elderly passengers. Passengers and crew due to sail on Ponant, Paul Gauguin and Nicko Cruises will need to complete health questionnaires before being allowed to board. Staggered boarding will be mandatory, as will mask wearing in public spaces.

If airports are anything to go by, the decision to use temperature checks will be contentious, with most health professionals agreeing that such measures only detect a minority of Covid sufferers. Researchers at the European Centre for Disease Prevention and Control, for instance, concluded that approximately 75% of passengers travelling during the Covid-19 incubation period by aircraft from Chinese cities would not be detected by thermal screening, predominantly because a significant number of those infected are asymptomatic. Given that thermal scanning offers little or no detection for asymptomatic travellers it remains to be seen how cruise ships can assure passengers and staff that they have adequate systems in place to prevent similar outbreaks.

Tackling this mutating threat is already influencing cruise ship design as operators limit spaces traditionally used for entertainment and instead seek to expand medical facilities, making way for a greater influx of doctors, nurses and medical staff on-board. This has already led to collaborations between naval architects and interior designers, seeking to reimagine how flows of travellers can move freely and safely on board cruise vessels while expanding medical facilities on board can be blocked off from the rest of the ship.

While some dining spaces will invariably expand to facilitate enhanced social distancing measures, many will be rearranged to ensure that all passengers are 1–2m away from each other with additional safety measures thrown in. European luxury river cruise line company AmaWaterways, one of the few cruise lines operating during the pandemic, is using glass shields in dining areas to protect passengers . Of course, with theatre and cinema capacity significantly reduced and no stops at ports and shore excursions, a seminal challenge will be not only keeping guests’ safe but sufficiently entertained. While staff roles will invariably change as those on board are trained in new protocols and taught how to deploy personal protective equipment (PPE) effectively, perhaps no role will be revitalised as much as the cleaner. While in the past cleaning staff have been seen as necessary but largely inconspicuous, stricter hygiene standards and rigorous cleaning procedures will become not only essential to the health of those on board, but a major selling point for passengers.

Genting Cruise Lines will need its cleaning staff on the ball at all times, with stringent sanitation protocols that include a twice-daily wipe down of passenger cabins and hallways, while elevators are disinfected every two hours. Some cleaners may even be replaced by robots to alleviate personal interaction. Hong Kong International Airport, for example, is using autonomous robots to kill microbes with rays of ultraviolet light.

With only a tiny fraction of the global cruise industry back in operation, it remains to be seen how successfully operators will be at nullifying the threat of Covid-19. So far success has been mixed.

MSC Cruises completed a seven-day cruise that began in the Italian port of Genoa and successfully snaked around the Mediterranean with no infections to speak of. A second voyage on 23 August saw one passenger denied access after testing positive for Covid-19 via both an antigen and molecular test. After resuming operations to the arctic in early August 2020, Hurtigruten discovered around 41 crew members and passengers aboard its MS Roald Amundsen vessel tested positive for coronavirus. Four crew members were admitted to hospital and further expeditions have been cancelled.

As CEO Daniel Skjeldam admitted, having protocols in place is only half the battle. “The preliminary examination of what happened on MS Roald Amundsen has uncovered several deviations from our procedures. That’s not good enough,” Skjeldam acknowledged in a statement following the incident.

The latter incident stands as an important lesson going forward. Ultimately, if cruise lines operating in these unprecedented times are going to be successful and win back the trust of their passengers, they will have to have pragmatic protocols in place to safeguard their operations from infection and see them through with utter efficiency.

Infected passengers on board the Diamond Princess died from Covid-19.
John Hopkins University 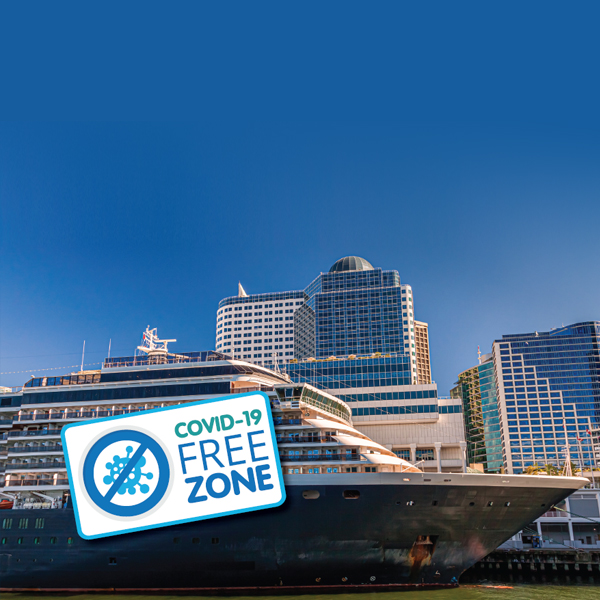 Enduring a global pandemic, cruise lines are looking for ways to provide a safe environment for passengers and staff when operations resume. Image Credit: Tomas Nevesely/Marlen Kenbayev/Shutterstock.com
Post to: