Cleaning up its act

Alternative fuels such as liquefied natural gas have received ample publicity of late, touted as a surefire way of cutting greenhouse gas emissions and making cruise travel more eco-friendly. One possibility is hydrogen, with the first commercial shipping vessels run on liquid hydrogen expected in the next few years. But what are the implications of this new technology, and how can it help us reach the goal of zero-emission shipping? Abi Millar talks to Jogchum Bruinsma, application manager for maritime at Nedstack, about the clean-energy solutions being developed for the cruise industry.

The cruise industry is on a mission to improve its sustainability credentials. Marine transport emits nearly one billion tonnes of CO2 each year and is responsible for 2.5% of global greenhouse gas emissions. Increasingly, regulators are beginning to take a hardline stance on pollution. Following on from IMO 2020, the International Maritime Organisation regulation that capped the amount of sulphur permitted in ships’ fuel oil, the sector is under pressure to do more. The IMO wants to cut international shipping emissions by at least 50% by 2050 compared with 2008 levels, while the EU is calling for zero-carbon ships by 2030.

A raft of different fuel options – not just liquefied natural gas (LNG), but also ammonia, methanol and biofuels – are being considered as alternatives to diesel. One leading contender is hydrogen. As the thinking goes, a hydrogen fuel cell could be placed on the ship along with batteries, enabling the vessel to sail long distances while generating zero emissions. Although there would be challenges to surmount, not least in the form of cost and manufacturing capacity, this would in principle be an extremely clean solution. It would represent a breakthrough in green shipping.

“The fuel cell is nothing more than a membrane technology, where you have hydrogen on one side of the membrane and oxygen on the other,” points out Jogchum Bruinsma, application manager for maritime at Nedstack. “What happens is the hydrogen splits into a proton and electron, and the proton can go through the membrane but the electron cannot. The electrons create a current and that is used to power the vessel. On the other side of the membrane, the hydrogen combines with oxygen to produce pure water.”

The push for hydrogen

Last year, a group of Norwegian companies said they were looking to build such a ship. The vessel, which is owned by Havila, will be fitted with a 3.2MW hydrogen fuel cell designed by Norwegian Electric Systems (NES). This will take the form of an on-board tank, filled with 3.2 tonnes of liquid hydrogen, with batteries for additional energy storage. NES said the vessel would be “the most advanced clean coastal cruise ship in the world”.

Elsewhere in Scandinavia, Danish shipping company DFDS hopes to deliver a 100% hydrogen-powered ferry by 2027. This ferry will use a mammoth 23MW fuel cell system, far larger than what’s available today, and will be developed by a consortium of companies with possible support from the EU Innovation Fund. While there is some way to go before these ships set sail, it is heartening to note that hydrogen-based solutions are being considered seriously. Engineers have been experimenting with hydrogen as an energy source for decades, while the first fuel cells were invented as early as 1839. But it’s only recently that there has been a political will to move away from fossil fuels.

“Nothing is easier than just burning a fuel that comes out of the ground,” points out Bruinsma. “Although Nasa has been working with hydrogen in rocket science for many years, it’s a gas and it’s hard to store. You need to compress it or liquefy it, and then you have to go through some kind of process to convert it into electrical energy. The fossil fuel market, by contrast, is just about converting a fuel that is widely available, easily transportable and easily stored.”

In recent decades, it has become apparent that continuing to burn fossil fuels at our present rate will have severe ecological consequences. Those implications aside, oil prices have fluctuated dramatically, with high prices during the 2008 financial crisis driving demand for other options.

And while the movement away from oil has not been linear, we could cite the 2015 Paris Agreement as the moment the trajectory became clear. “Following the Paris Agreement, there was this overall thought that we need to do something about our CO2 emissions. That’s where hydrogen comes in,” says Bruinsma.

In 2016, Germany unveiled the world’s first hydrogen-powered train, which was followed a few years later by the Hydroflex train in the UK and early plans for a ‘hydrail’ in the US. The shipping sector has also turned to hydrogen, with a number of zeroemission pilot projects under way.

“Following some demo projects over the past few years, hydrogen-powered ships are coming quite soon,” says Bruinsma. “So, this year [and] next year, we’ll be seeing the first vessels operating on commercial routes with hydrogen.”

The real problem with hydrogen is that it is only as green as its production process. Although the gas is plentiful, it does not exist in a pure form in nature, and has to be separated out from other materials. Much of the hydrogen in use today is created from methane, releasing greenhouse gases during production. Greener extraction methods (such as electrolysis from water, powered by renewable energy) remain uncommon and expensive. If green hydrogen is to take off as a shipping fuel, producers will invariably need to invest in its production. This will require a push on both sides, as the customers will first need to demonstrate that the demand is there.

“Liquid hydrogen is not available in large quantities at the moment,” says Bruinsma. “There are currently three plants in Europe producing liquefied hydrogen, but they are producing the exact amount that clients request. It will take a while to scale up.”

There are other potential issues too. Hydrogen systems are highly flammable, raising safety concerns, and storing it as a liquid takes up a lot of space that could otherwise be used for cargo.

“If you look at the smaller expedition vessels, it might be a very feasible solution, because you only need limited power,” says Bruinsma. “However, the amount of hydrogen fuel you’d require to deliver 50MW all day long would be a challenge.”

The cost issue is perhaps the easiest one to solve, in the sense that the fuel cells themselves are cheap to maintain once they’re installed.

“Yes, the capex is more expensive, but probably your return on investment from a maintenance point of view is much lower,” says Bruinsma. “If you look at public opinion and people’s eagerness to pay a bit more for zero-emission fuel, I think we’ll solve the capex issue.”

In terms of storage, there are various techniques in development, which would involve storing hydrogen in powder or paste form. Researchers in Dresden recently created a substance called ‘Powerpaste’, which is based on solid magnesium hydride and decomposes into hydrogen under very high temperatures. This could be used in small vehicles. Meanwhile a UK company, Steamology, is developing steam-powered hydrogen electricity,with a highly compact steam generator based on compressed hydrogen and oxygen gas.

If the availability and storage issues can be overcome, the benefits of hydrogen could be significant. As well as being a zero-emission technology, the fuel cells generate pure water as a waste product, which ships could use on board in their drinking water system. They also generate heat, which could be used to warm the vessel. And since there’s no combustion involved, the fuel cell reactor is completely silent.

As a result, Bruinsma thinks that we are likely to see more developments in the pipeline. “Two years ago, nobody was looking at hydrogen and maritime, but now we’re two years down the road and everybody’s talking about how we’re going to solve this puzzle,” he says. “It starts with large investments in electrolysers, creating clean, green hydrogen that you can then liquefy. So that is coming up. I think the first investments are planned, or more than plans.”

Bruinsma thinks inland shipping, which requires less fuel overall, could be a good prime mover. The same applies to shorter-range vessels. However, he doesn’t think this will translate into a rapid shift towards hydrogen fuel.

“We won’t be retrofitting every ship towards hydrogen, because it’s not feasible to have that amount available,” he says. “You’ll have some early adopters who want to make hydrogen happen. But there’ll be some who say, OK, well, we’ll go with LNG for the next few years and wait it out. There will be ships that will be sailing on ammonia or methanol, because that suits their business better. I would also say there’s room for electric batteries – if you can fuel your ship entirely with batteries, don’t bother thinking about something else.”

This mix is likely to persist for some time to come. The next few years look set to be a transitional, experimental period, in which different shipping companies try different fuels and work out for themselves which suits their purposes.

“There’s so much going on at the moment that it’s very hard to predict, and it really depends on who you’re asking,” says Bruinsma. “We’re still in that sort of chaos, looking at alternatives. And probably in five to ten years’ time we’ll be able to pinpoint this and say, well, these are the clear winners.” 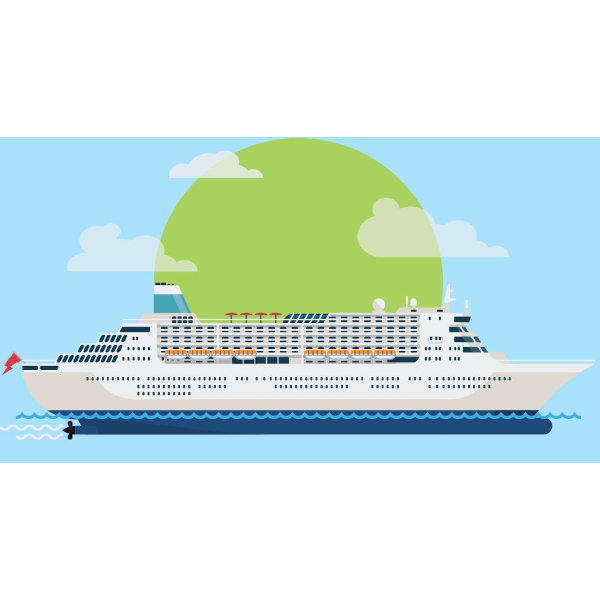 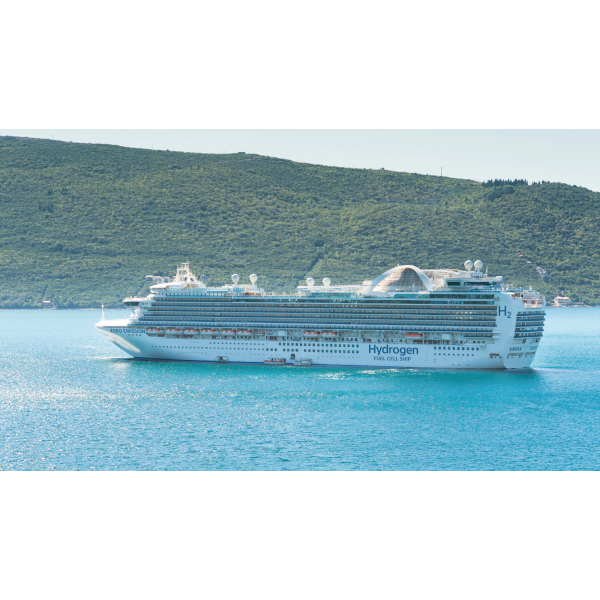 The recent political will to move away from fossil fuels has accelerated research into hydrogen-based solutions.
Post to: