Appointed to the presidency of CLIA earlier this year, Kelly Craighead has won plaudits from industry insiders for her efforts to publicise the positive economic impact of the cruise sector, and realign relations with ports and destinations across Europe. Greg Noone sits down with cruising’s champion to discuss the emerging opportunities and challenges for operators, ports and the travel segment at large.

We begin by sailing down the coast of Maine in the company of Micah Philbrook, a local lobster trawlerman. We hear the waves breaking against the bow of the small fishing boat and the crackle of a message on the shortwave radio of his boat, the Claire Elizabeth. “I’ve lived in Maine my whole life, and my family’s been lobstering for probably over 100 years,” Philbrook tells us, as we cut to him and another crew member hauling another full trap up from the seabed and onto the deck.

As we learn about Philbrook’s life and the lengthy hours he spends upon his boat, the overall message of the film remains unclear – until we see a white passenger liner steering into port. “Cruising in Maine, it definitely helps,” explains the lobsterman. “It brings a lot of extra tourists to Maine and kind of promotes the whole lobstering brand.”

This mini-documentary is just one of many released under the auspices of the #WeAreCruise campaign, kick-started last April. It’s the brainchild of Kelly Craighead, who has been eager to promote the economic benefits of the cruise industry to the communities it visits since her appointment in January as chief executive and president of the Cruise Lines International Association (CLIA).

“How do we tell the story of the economic impact of cruise, the kind of people-to-people power of cruise?” asks Craighead. It’s a rhetorical question. “What I’m seeing, as I kind of settle into this job after all of seven months, is that being able to tell that story of economic impact and transformational travel and good stewardship of our cruise line leaders will be how we spend our time over the next 12–18 months, at least.”

It’s a sign – among others – that Craighead is adopting a more activist posture as president and CEO than her predecessors, underscored by her rigorous travel schedule meeting operators and other industry stakeholders. Her ambitions for CLIA and the wider sector are simple but profound.

“What is the opportunity for the association?” says Craighead, again rhetorically. “What are the aspirations of our members? And how can I align our activities to really make sure that we’re meeting and exceeding those goals?”

Craighead’s route into travel came by way of Washington politics. After a short period as a sales manager, in 1993 she joined the Clinton administration as a deputy assistant to the president. Leaving the White House after eight years of service advising on domestic and international policy, Craighead briefly worked on K Street, advising start-ups on communications and capital formation issues.

“I did quite a bit of consulting work for international organisations, like the World Travel & Tourism Council,” she recalls, a period when she began to obtain “an understanding of destination stewardship, crisis planning – some of the megatrends that are influencing travel and tourism around the world.”

76.9 million
Tourists arriving in the US in 2017, the last year of Craighead’s tenure as deputy assistant secretary for travel and tourism.
US Government

Most of all, Craighead formed a keen insight into what she considered to be the immense value of partnerships between public and private sector bodies, having worked on both sides of that divide. Again, she describes what she learned using simple rhetorical questions, a crutch one suspects is a legacy of her former role advising President Clinton.

“How do we have constructive public-private partnerships?” she asks. “How do we work to serve and lift up our members in meaningful ways as the industry grows each year? How do we scale an operation like CLIA so that we’re really meeting the needs of our members?”

There is also the small possibility that Craighead is genuinely asking herself these questions. When I ask her what a typical day is like for her as CLIA’s president and CEO, she admits that she’s still learning on the job. From the outset, Craighead says she made sure to “really invest quite a bit of time making sure that I was speaking with every single one of our cruise line members”, and acquiring a feel for the organisation itself, spread as it is across five continents.

“What is the opportunity for the association? What are the aspirations of our members? And how can I align our activities to really make sure that we’re meeting and exceeding those goals?”

An eye for marketing

The #WeAreCruise campaign, though, seems like vintage Craighead. After a time leading a philanthropic organisation, she joined the US Department of Commerce as its deputy assistant secretary for travel and tourism in 2014. Craighead left her role three years later having helped spur the biggest influx of tourists into the US – some 76.9 million visitors – in its history.

“By virtue of serving as, essentially, the de facto tourism minister for the US, I really was exposed to the larger global and tourism community,” explains Craighead. It was during this period that she was first introduced to the opportunities created for the travel industry by the cruise sector. “Now that I’m on this side and focus specifically on cruise, it’s even more dynamic and exciting than I originally thought.”

The goose that lays the golden egg

One of the most important takeaways for Craighead in her first few months at CLIA has been the important leadership role the cruise industry plays in travel and tourism dialogues taking place around the world. Emphasising the positive outcomes these relationships bring to local communities is what the #WeAreCruise campaign is all about. However, Craighead fully recognises that the industry does need to do more to alleviate specific concerns among residents in certain destinations about the more detrimental side effects cruising can bring.

A case in point is the recent agreement reached between the cruise industry, through CLIA, and municipal authorities in Dubrovnik. Known to most visitors for its appearance in the HBO series Game of Thrones – as the city of King’s Landing – the Croatian port is famous for its blanket of terracotta roofs ringed by high medieval walls. Its attraction as a holiday destination did not escape the cruise industry, which regularly disgorges thousands of visitors into Dubrovnik throughout the summer months.

“We have just formalised an agreement with the city of Dubrovnik and the cruise industry, through CLIA, that I think could be a great model of cooperation and participation going forward.”

One can, however, have too much of a good thing. Dubrovnik is estimated to have welcomed some 1.27 million tourists last year, prompting concerns that the city was getting overcrowded, its population being only 42,000. After his election in 2017, Mayor Mato Frankovic made an example of cruise operators by first staggering ship arrival and departure times and then capping the maximum number of vessels allowed to visit the port every day to just two.

“We are ready to lose some money, but we will have a better quality of life for citizens and tourists,” Frankovic told The Dubrovnik Times.

The Croatian city isn’t alone in feeling overwhelmed. In Palma, on the Spanish island of Mallorca, over 11,000 locals have signed a petition to limit ship visits to one per day. In Venice, meanwhile, the city’s port authority has appealed to other popular cruise destinations, including Barcelona, Hamburg and Amsterdam, to band together and demand operators make their vessels “compatible with our structures and the environment”. This problem was underscored for many of its residents in June, when the MSC Opera injured five people when it crashed into a wharf just outside the Italian city.

Craighead understands what a delicate moment this is for the industry, hoping to continue the industry’s success in Europe but have it remain mindful of its impact on the communities it comes into closest contact with.

Shortly before our interview, the CLIA president returned from Dubrovnik, where she signed a memorandum of understanding (MOU) with Frankovic. Both parties intend to create a dedicated working group the membership of which will comprise representatives of international travel companies and local citizens, as well as confirming the previous cap on ship numbers.

“We have just formalised an agreement with the city of Dubrovnik and the cruise industry, through CLIA, that I think could be a great model of cooperation and participation going forward,” explains Craighead, who hopes that the MOU will lead to a closer collaboration with the city in the longer term. This, she believes, will allow the sector to “engage at the local level, to be able to kind of work in support and vision for how visitors respect the city”.

Craighead also had the added advantage of heading out to Croatia after she’d met city authorities in Juneau, Alaska, where, she says, “there’s a really strong existing public-private partnership with the cruise industry”. The CLIA president most definitely sees the potential in building similar relationships between the industry and municipalities, where problems are engaged in a collaborative way rather than left to crackle and explode in a torrent of acrimony.

“To be able to share some of the best practices that they’ve put in place in Juneau with Dubrovnik and other cities, I think, is a value-added role that CLIA can play,” Craighead argues, although she concedes that it’s one possible approach to solve problems rather than a silver bullet for all of them.

Make sure the message is clear

“I know that cruise, because it is so visible in some of these cities, is an easy target for some,” she says. “I think ensuring, again, that we’re telling the good story that we have around environmental responsibility and stewardship is really critical.”

Craighead is confident that she – and the industry as a whole – can rise to the challenge. “I’m excited by my appointment and the ability to work with these incredibly impressive cruise line leaders, and the whole breadth and depth of the cruise community,” she says. “Being able to tell their story, not only about the economic impact that they have, but also the kind of human interest and the value-added role that cruise plays, are the things that are motivating to me, and that will guide our work in the coming weeks, months and years.” 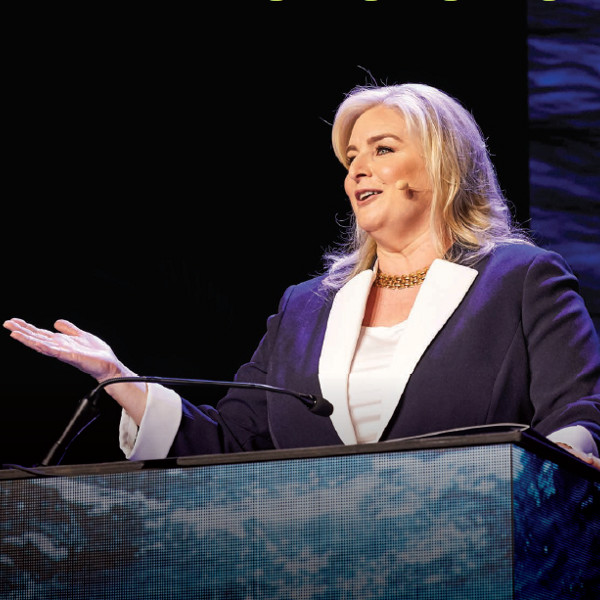