With three ships on order and the power of a global brand at its disposal, Virgin Voyages is being positioned as a genuine disruptor to cruising’s status quo. Phin Foster meets president and CEO Tom McAplin to discuss the lessons learned from his love of the start-up experience, his plans to appeal to untapped market segments and the creation of a corporate culture that is unafraid to do things a little differently.

Revealing that you’ve “never fancied going on a cruise ship” might seem an odd way to unveil the sector’s biggest new brand in more than 20 years, but Sir Richard Branson has built his business empire through a willingness to do things a little differently.

At the Faena Hotel Miami Beach in October, the British billionaire appeared on stage dressed as a cabana boy, bearing towels and a bottle of bubbly, to announce the rebranding of his embryonic operator – from Virgin Cruises to Virgin Voyages – and confirm the signing of a contract with Fincantieri for three 2,700 passengers ships at an estimated cost of €2 billion, the first of which will be delivered in 2020,

“I’ve never fancied going on a cruise ship,” Branson told the assembled dignitaries and media throng. “But I do fancy going on a voyage.”

It’s already shaping up to be quite a trip and the man tasked with taking the tiller is under no illusions about its scale. Tom McAlpin stood alongside his boss on stage in Miami and, while he may not have generated quite as many headlines, he undoubtedly carries his own cache of star power within the industry.

McAplin, Virgin Voyages’ president and CEO, came on board in 2014, but with keel laying for the brand’s first vessel scheduled for March, he knows that his tenure is about to enter its next phase.

“I like to say ‘ship’s getting real’,” he reveals with a chuckle when we speak in February. “We’ve been building towards this for some time and now we’re talking about a matter of three years from operation. It’s generating a lot of excitement throughout the team.”

It’s a team McAlpin has had to build from scratch and that now stands at around 40 people in the Miami headquarters. New arrivals on the cruise scene are notable for their scarcity, and there are few precedents to draw on, but, fortunately, the CEO has chartered similar waters before. He joined Disney Cruises as part of the founding management team in 1995 as vice-president of finance, business development and shoreside travel operations. During the creation of the line, he was responsible for planning the first two ships and negotiating contracts for Castaway Cay. McAlpin would ultimately serve 14 years at Disney, his last five in the role of president, before departing in 2009.

His next role would be president and CEO of residential cruise ship The World, but the Disney experience had clearly created an itch McAlpin still craved to scratch.

“I had many conversations with the board at The World where I told them, ‘I love what I’m doing, this is a great organisation to be associated with – and one of the only things that could ever tempt me away is a start-up,’” he reveals. “Being part of the opening team at Disney and enjoying the success was so inspiring and provided the feather in my career cap. The excitement and pride that comes with being part of a start-up is hard to describe. I used to be CEO of The World, but now I feel as though I’ve got the best job in the world.”

Experienced and in the lead

This background means that when McAlpin speaks of the journey so far and the challenges that lie in wait, it comes from a place of experience and authority that few else have visited. It also demands quite different skills to those required of his contemporaries at more traditional cruise operators.

“My role has had to evolve tremendously and will continue to do so,” he confirms. “This is not like an existing line, where you can take people and concepts from elsewhere in your fleet and simply translate across; where policy and procedures, and the way you do business are already well established. We’re building something here from scratch and it’s the big bang theory: in a single moment, we’ll go from nothing to an operational business.

“It involves putting a lot of infrastructure in place and that’s why you haven’t seen many start-ups in this space. The sheer amount of capital involved – not to mention branding issues – creates real barriers to entry.”

While McAlpin and his team are tasked with building that infrastructure, he acknowledges that there are also inherent advantages of not being forced to build upon legacy systems or policies. He also raises the concept of ‘legacy consumers’ – those used to a certain experience and resistant to change. And he certainly does not have to tackle branding from a standing start. Much like Disney, Virgin enjoys a global recognition factor and carries with it certain expectations and guarantees.

Another parallel is a degree of niche appeal; this is a brand that speaks to a specific segment and it is there that Virgin Voyages has identified its target market. Many within that group, like Branson, may not have considered a cruise vacation before, but the arrival of Virgin on the scene may lend the idea a certain legitimacy and appeal.

“We’re looking to be a boutique player, and that means you can focus on a smaller group and create a differentiated product, boasting attributes you can talk about with real specificity,” McAlpin explains. “When you look at what the brand stands for, it’s about innovation, doing things uniquely and having a bit of fun while we’re at it – not taking ourselves too seriously. The question then becomes: how do you take all of that and turn it into tangible, differentiated experiences?

“That accounts for a lot of the work that we’ve done up to this point. I’m not at liberty talk about those things just yet, but the ships and programming will look very different to what’s already out there.”

It is statements like this that have marked Virgin Voyages as a potential disruptor within what has traditionally been something of a placid operational landscape. From Airbnb to Uber, disruptor brands are synonymous with challenging the status quo and threatening establishment players, but McAplin insists that Virgin’s arrival should not be interpreted as an inherent criticism of what has gone before.

“When we talk about being disruptors, we’re not saying the industry is bad – frankly, it’s quite the opposite; one of the main reasons we’re here is that it has such high satisfaction levels,” he says. “However, as the sector has grown, much of that growth has been founded upon appealing to broader segments of the population. Companies are out there trying to entice families, teens, young adults, couples, baby boomers, seniors and everyone in between.

“We see an opportunity is in providing a target audience with something that they’re not getting elsewhere. We’re going to be a premium product and want to appeal to ‘the young at heart’; people who would like to do something off the beaten path, have a little flexibility, have a good time, and enjoy dining and entertainment in a way you would in an urban environment. It’s a segment that is more about lifestyle and outlook than age.”

It is a demographic that is increasingly targeted by landside hotels amid a flurry of lifestyle brand launches: international, independent, sociable, design-focused guests looking for personalised experiences that speak to their values and outlooks. One wonders, however, what proportion of this group would ever consider a cruise vacation.

“There are a lot of existing cruisers that will come on board a Virgin voyage,” McAlpin replies. “They currently enjoy the experience, but don’t necessarily get every element they’re looking for. But this will also appeal to a segment for whom cruising evokes something for their parents’ or grand-parents’ generation. Virgin, much like what Disney did, will give them the opportunity to try something new.”

As Fincantieri prepares to commence construction on the debut vessel that will put this theory to the ultimate test, McAlpin continues to build a framework and corporate crew that will ultimately drive it to success or failure. Typically, he is not going down the traditional route, instead striving to find a balance between cruise stalwarts, Virgin brand evangelists and industry outsiders. Like every other element of the project, he says, it all started with “a blank piece of paper”.

“We clearly need a contingent versed in the building and operating ship, as well as all the regulatory, technical and safety aspects associated with that,” he says. “They know what the realities are, what we can do with a ship and exactly how far we can push things. But we also make sure these people have a mindset that questions the status quo and do not do things just because it’s the way they’ve always been done.

“I want them asking, ‘Where can we do things differently?’ It’s about creating differentiation in everything we do – not for the sake of it, but because we want to create something new.

“Those people, alongside colleagues who truly understand what Virgin stands for, and others from outside Virgin and the cruise industry – you’ll see some great examples when we announce our design partners – provide real diversity, with each group pushing the other while also creating checks and balances.”

McAlpin is in danger of sounding almost revolutionary and one wonders what cruise’s established players must be thinking about such brash pronouncements. The CEO acknowledges that such talk will likely garner attention, but also insists that success for Virgin should equate to success for all.

“Their eyes are open because there’s been so much hype and discussion about us as a disruptor, but I don’t think they should see us as a threat,” he insists. “We’re a small player within the context of the wider industry and our arrival is ultimately a good thing: it validates the success of the industry as a whole and crates more awareness about cruising in general.

“We’re not a CLIA member yet, but we will be, absolutely. One thing we can all benefit from is working together and creating synergies. Branson is a great believer in leaving a lasting, positive impact on the world, and there’s always been an emphasis across his companies to make that an intrinsic part of corporate culture. The industry already does a lot in this regard, but it’s an attitude we can bring to the table. We’ll benefit from them and I hope that they can benefit from us, too.”

We may have to wait another couple of years to see Sir Richard Branson board a cruise ship but, in the meantime, you can be sure that his travelling companion will be doing a lot more than merely treading water. It may look as though things are headed in the right direction, but this voyage still has some way to go. 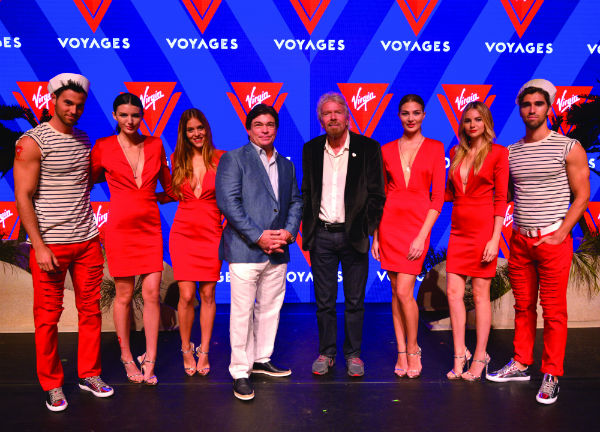 Virgin Voyages will attempt to bridge the gap between traditional cruising and the modern market. 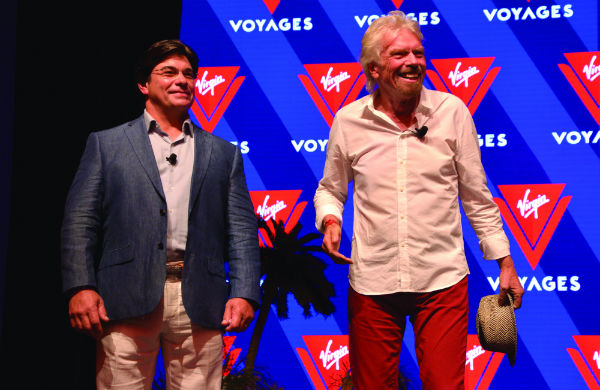 Tom McAplin and Sir Richard Branson take to the stage to reveal new plans for Virgin Voyages.
Post to: