Received wisdom indicates that the smaller the ship, the greater the intimacy and luxury afforded to guests. But perhaps that equation is no longer such a sure thing, in light of the inauguration of Seabourn Encore at the start of 2017. Able to house 600 guests, it is Seabourn Cruise Line’s largest vessel to date, and even left the brand’s president Richard Meadows close to speechless at its launch.

“I had no doubt that the ship would be stunning, but, wow!” he exclaimed at its launch. This is the kind of amplification befitting of a decorative christening ceremony – which is precisely what Encore, the fourth ultra-luxury vessel to join the Seabourn fleet, received.

Acclaimed soprano Sarah Brightman was at hand to smash a bottle of champagne against the hull of the ship pier-side in Singapore on 7 January, after which an assortment of local musicians and cultural acts – including lion dancers and stilt walkers – entertained guests.

Dignitaries present at the opening included CEO of Singapore Tourism Board Lionel Yeo, who referred to Encore as Seabourn’s “crown jewel”.

“It is also testament to the growing appeal of South-East Asia as the destination of choice for discerning travellers,” explains Yeo. “We are confident that Seabourn’s guests will enjoy experiencing the rich and diverse offering of the region, and we look forward to welcoming more of Carnival Corporation’s [Seabourn’s parent company] ships to Singapore.”

“Seabourn Encore marks a major step forward in terms of growth for our company,” added Meadows. “This ship is stunningly beautiful, and I know that guests are going to be absolutely captivated as they step aboard and see it first hand.”

Following the gala event, Encore departed on its inaugural voyage – a ten-day ‘Gems of the Java Sea’ cruise, bound for Indonesia. According to Seabourn, the trip was sold out in two days on the back of popular demand. Rewind a little more than month and the vessel is docked at Fincantieri of Italy’s shipyard in Marghera, Venice, receiving its final touches.

Fincantieri, one of the world’s bestknown shipbuilders, has a long-standing relationship with Carnival, having built 59 ships for the Miami-based operator since 1990. Another seven ships are currently filed in the order book.

Encore – the first completed of two new all-suite vessels ordered for the company – is unprecedented for the brand in terms of its size. It is roughly 26% larger than Seabourn’s trio of Odyssey-class vessels, and can hold about 34% more passengers on account of double occupancy.

The rationale behind the bigger ship dates back to the launch of the brand’s three existing Odyssey-class vessels – unveiled between 2009 and 2011 – which, at the time, increased the size of its ships to 450 guests. It was “a move very well received by our repeat cruisers”, according to Meadows, and sowed the seeds for Seabourn to return to the shipyard with an even larger-scale blueprint.

“Those ships delivered so well with the new venues and the extra space that when we looked at how to grow, we decided to build a similar ship with an extra deck to accommodate more guests and suites, and an expanded dining experience,” the CEO explains.

According to Fincantieri – which signed a letter of intent with Seabourn for the construction in October 2013 – one of Encore’s most distinctive features relates to its engine room. Fuel consumption, it says, is “significantly reduced” due to the optimisation of the ship’s hydrodynamics. “It will be built using the very latest technologies, the standards of which will exceed the requirements of the relevant legislation,” promised the shipyard in 2016.

It’s a promise that has been kept. Encore incorporates an assortment of Wärtsilä propulsion, electrical and automation solutions, including Wärtsilä Nacos Platinum and Wärtsilä Valmatic Platinum systems. The Finnish group – which put pen to paper to supply Seabourn with its systems in December 2015 – has also delivered consoles for the vessel’s bridge and engine control room, including a video wall, a tank level and flood detection system, and a valve remote control.

In addition, there are four thruster drives for the bow and stern, four diesel alternators, four AC motors for the thrusters, two dedicated 6.6kV switchboards for highvoltage distribution, and four transformers for low-voltage mains supply.

“Modern cruise vessels are highly complex, with unique operational requirements,” explains Maik Stoevhase, Wärtsilä’s director of automation, navigation and control. “We are, therefore, extremely pleased to have been chosen once again to provide our state-of-the-art systems for an important cruise-vessel operator.”

More manifest to guests will be Encore’s well-appointed amenities.

While all of its cabins are suites with balconies, walk-in wardrobes, bathrooms with marble sinks, and separate baths and showers, passengers can also avail themselves of communal spaces, such as the Seabourn Square, the liner’s signature social hub, where guests are encouraged to convene and relax.

Also on offer is the Retreat, a new area at the top of the all-balcony ship, comprising 16 private cabanas that can be taken up for a fee of $249 a couple on port day and $349 when the ship is at sea.

Spa and Wellness with Dr Andrew Weil is also available in partnership with The Onboard Spa by Steiner, offering guests a holistic spa and wellness experience.

Seabourn has also undertaken new partner programmes such as The Grill, an evening-only restaurant devised by US chef Thomas Keller, and Sushi, the first Japanese restaurant to feature on a Seabourn ship.

The ship’s interior is the brainchild of internationally renowned hospitality designer Adam D Tihany, whose selfidentified chief remit was to make Encore “feel more like a luxury yacht”.

Tihany – whose CV credits include Mandarin Oriental Hyde Park hotel in London and the Boscolo Exedra Roma – will also oversee design of the second of Seabourn’s new ultra-luxury vessels, Ovation. This ship, which is currently under construction at Fincantieri, is scheduled to launch in early 2018.

“He knows the minds of luxury consumers, and has sailed with us to see how the guests interact with each other and the ship,” said Meadows of the designer in 2016. “He has designed the space with the senses of the guests in mind.

“The ship will feel like a super-yacht with clean lines, high-gloss wood and sleek modern style – a very current look – and little changes will open up the on-board space. Adam has done an incredible job of moving us along in the design process.”

At the time of writing, Encore has just completed a 16-day voyage around the Great Barrier Reef and Australia’s Gold Coast. She is now set to complete a return leg of the ‘Gems of the Java Sea’ cruise back to Singapore. From there, the ship will proceed on a two-week ‘Jewels of India and Arabia’ cruise to Dubai, followed by a 19-day ‘Arabian Gems and Holy Land voyage’, before completing her winter season in Athens on 5 May.

The subsequent summer itinerary takes the ship to the Mediterranean, with tours of Greece, Italy and Spain. The summer tour is pencilled to finish in Barcelona on 13 September.

Counter to such high expectations, however, not all has gone entirely to plan. Despite claiming a sellout for the inaugural tour, a recent report by the Telegraph said passengers have commented that the Retreat area “had barely been used”.

Then, on 20 February, Encore encountered difficulties in the Port of Nimaru, New Zealand, after coming loose from its moorings and colliding with another vessel. The collision, however, does not appear to have impacted on the vessel’s itinerary.

Bumps – figurative and literal – aside, Seabourn will still be confident that Encore, in the words of Richard Meadows, can issue “the start of a new era of ultra-luxury cruising”. 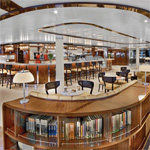 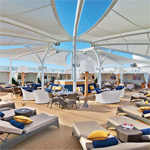 On-board communal spaces such as the Retreat offer guests space to relax and enjoy the ‘all-balcony’ ship. 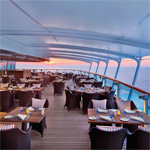 The Colonnade on board Seabourn Encore. 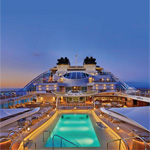 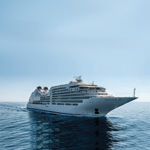 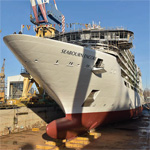 Seabourn’s Encore, under construction at Fincantieri, Italy.
Post to: