Back on the menu

As with everything else in the cruise industry, the grand dining experiences passengers once salivated over have been put on hold. But given how important food and drink has traditionally been to life at sea, how can operators adapt in a world of social distancing? Andrea Valentino talks to figures across the industry to understand the challenges that Covid-19 poses for cruise F&B – and what changes guests might expect when they finally enter the dining room again.

In May 2000, as the new millennium dawned, Norwegian Cruise Line changed cruise hospitality forever. Finally abandoning old stereotypes of formal dinners at seven-on-the-dot, served by po-faced men in penguin suits, the operator unveiled a more relaxed approach. Known as ‘freestyle cruising’, it promised that passengers could eat where they wanted, when they wanted. Friday night filet mignons were out; chocolate cake for breakfast and fried eggs at midnight were very much in.

Over the intervening two decades, what Norwegian started has been taken up by practically every cruise operator on earth. Food and drink is now a fundamental part of the cruise experience, with operators eager to offer sophisticated gourmet ‘concepts’ to ever-younger passengers. If nothing else, this is reflected in the statistics. On the biggest vessels, like Royal Caribbean’s Symphony of the Seas, guests gobble up 20,000lb of potatoes every week and 3,200 slices of pizza an hour. And with ships now boasting dozens of restaurants, some with 1,000-person buffets, the industry seemed to be moving inexorably towards more choice, more excess.

Though huge uncertainties remain about the future of the cruise industry in its current guise, one point is certain: behaviours are going to change. With social distancing the order of the day, after all, how can any responsible operator keep the old buffets going?

Not that the situation is totally hopeless. From extra cleaning to staggered meals, industry insiders are already working to keep dining safe in the age of coronavirus. And who knows – perhaps the upheaval of the pandemic is exactly the jolt the industry needs, two decades on from Norwegian’s revolution? Don’t eat until you’re sick

Kathy Casey knows a thing or two about cruise hospitality. An enthusiastic passenger herself, she’s also worked in the industry as a consultant and menu developer for a quarter of a century. To put it another way, Casey has seen both sides of the galley door – and is keen to emphasise just how important hygiene is to the running of a ship’s culinary operation. “They take it very seriously,” says Casey, owner of Food Studios-Liquid Kitchen, an international food, beverage and concept development company. “It’s so clean in the back of house on the ships, more than any other type of food and beverage sector I've ever seen.”

“They take it very seriously. It’s so clean in the back-of-house on the ships, more than any other type of food and beverage sector I’ve ever seen.”
Kathy Casey, Food Studios-Liquid Kitchen

Her point is echoed by operators themselves. “The safety and well-being of our guests and crew has always been our top priority,” says Fabio Scaglione, the F&B strategy director at Celebrity Cruises. “All our safety and food health protocols are executed with the highest level of sanitation.” None of this is very surprising if you’ve followed industry health scares over recent years. Even before Covid-19, norovirus and other illnesses have sometimes ravaged passengers, crews, balance sheets and stock prices; illnesses quickly hopping from person to person in crowded dining rooms and narrow passageways. In January 2019, for example, 475 passengers on board Oasis of the Seas became sick when a norovirus outbreak began. More broadly, gastrointestinal infections have caused chaos everywhere from a Norwegian tour of the Caribbean to a P&O trip in the Baltic.

Of course, coronavirus has the potential to be far more dangerous than a bout of norovirus – but the fact remains that crew are obviously conscious about keeping food areas clean. All the same, you get the sense that the post-Covid environment could spark special challenges. For her part, Casey suggests that controlling passengers themselves will be especially tough, noting, “The cruise lines are going to have to put in very strict guidelines, and hopefully people follow them.” Then there’s the question of coronavirus itself. Unlike norovirus, after all, it spreads through the air in droplets, meaning even the cleanest of hands can’t contain its movement.

It’s no surprise, then, that operators have been so busy preparing for whenever trips restart. Though they’ve been reluctant to give too many concrete details, Thomas Trevethan, Silversea’s corporate director of food and beverage, speaks for many of his colleagues when he says that “our team is working hard to devise protocols to protect the health and safety of our guests and crew as a top priority”. Among other things, Trevethan describes the panindustry Healthy Sail Panel, which composed of 11 health industry experts and is working on everything from temperature screenings to social distancing. At Celebrity, Scaglione makes similar noises, describing how he’s confident “science-backed” actions will get cruise F&B back on track soon.

All this talk of roadmaps and protocols sounds great in theory – but how might the cruise dining room of the future actually look? Listen to Kathy Casey and you might be surprised to learn that it may not be so different from what’s been happening already. Dining times will have to be staggered, of course, and passengers probably won’t be plopped next to a group of strangers. But when it comes to famous cruise institutions like the buffet, Casey describes how previous (if less serious) health emergencies had already nudged the pendulum in the right direction, “When you get outbreaks like norovirus, staff can switch over to serving the customer. That’s fairly simple.” Trevethan agrees, noting that even before the pandemic, “guests chose [their food] at the buffet, but waiters served them by bringing plates to the table with personalised service”.

“The safety and well-being of our guests and crew has always been our top priority. All our safety and food health protocols are executed with the highest level of sanitation.”
Fabio Scaglione, Celebrity Cruises

This makes sense. As cruise passengers become increasingly cosmopolitan – work by Deloitte found that 70% of cruisers now expected to be engaged in a ‘personalised, authentic’ way – customising dining options seems sensible from both a health and a business perspective. So too is the idea of small plates, with Casey describing how trendy restaurants in places like Las Vegas are already seducing diners with meals in personal jars, pans and other unique containers. On a related note, cocktails on tap could well become more popular too. For one thing, they’re quick to make, which avoids risky crowds forming by the bar. For another, they’re easy to personalise, a pre-cut orange peel here, a risk-free olive straight from the jar there.

The food guests eat, Casey adds, might change alongside their tableware. With nearly twelve traumatic months of lockdown and economic turmoil behind them, she believes passengers may be looking for robust, hearty, comfortable flavours. And given the collective health scare we’ve all just endured, she wonders if ‘immune-building’ foods and drinks might become popular too. Among other things, Casey describes healthy juices with turmeric and ginger, vegetables that could even be cultivated at sea. For instance, Holland America Line began growing its own microgreens aboard its Koningsdam ship in back 2016, an experiment that would now have the added benefit of keeping passengers isolated from infectious spots onshore.

You get the sense, in other words, that on-board cooking over the next few years may change in ways that are gradual, not revolutionary. All the same, operators are clearly looking at more fundamental changes too. From his office in Florida, for instance, Scaglione says he’s especially excited about all the technological enhancements his team is working on. Pretty soon, guests will be able to view restaurant menus on Celebrity’s app, using a QR code. Once again, this makes sense from a hygiene perspective – and fits in with the broader zeitgeist around personalisation. “Combined with our digital innovation to increase ‘touchless’ experiences,” says Scaglione, “I believe F&B will continue to reach new heights without jeopardising the high-quality experience we provide.”

Over at Silversea, Trevethan approaches the same questions from a different angle, arguing that a streamlined menu and efficient pre-ordering will ensure that room service is a viable option for guests who want to stay socially distant at mealtimes. And for those who don’t, Casey suggests that operators may choose to host more meals outside. Apart from being safer than sitting dozens or hundreds of guests together inside, this approach would also make eating more exciting. “If you could do themed dinners outside, that would be special,” she says. “We might see the dining experience as even more of an escape.”

Certainly, this is the path that Silversea seems to be going down. Launching later this year, the company’s ‘S.A.L.T.’ (Sea and Land Taste) programme promises to “unlock entire ecosystems around food and drink”. Beyond the usual PR spin, the scheme really does sound exciting, offering passengers the chance to cook and eat local food from menus that change as their ship docks in new ports. “The new concept will take experiential culinary travel to new levels,” Trevethan says, “combining the richest local cuisine, culinary heritage, and food culture from all over the world”.

Sounds promising – even if the “when you want, where you want” approach started by Norwegian may be transformed forever.

Potatoes are eaten each week on Norwegian’s biggest vessels, such as Royal Caribbean’s Symphony of the Seas. Norwegian

Of cruisers expect to be engaged in a ‘personalised, authentic’ way.
Deloitte 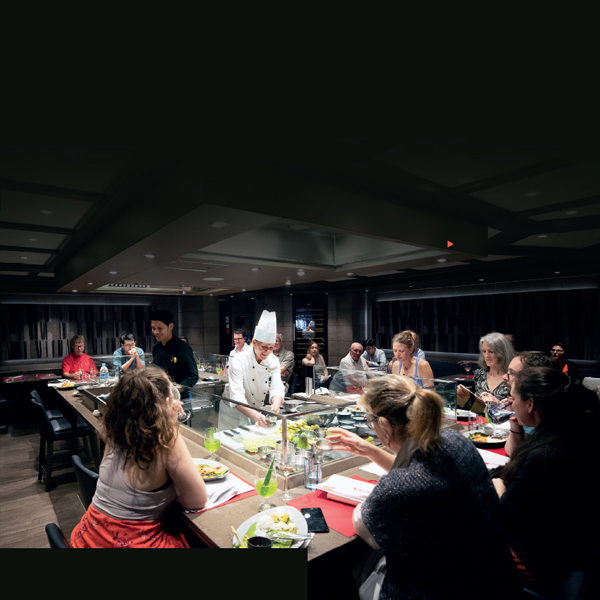 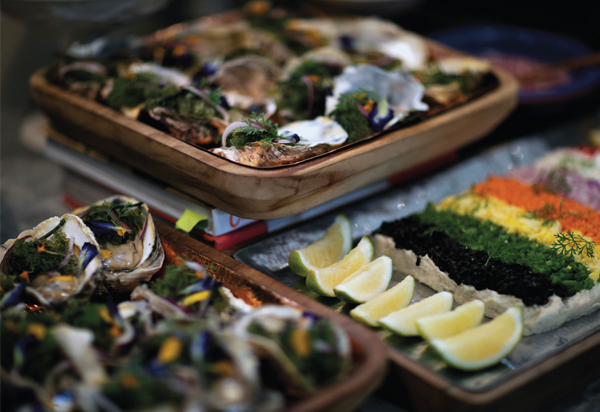 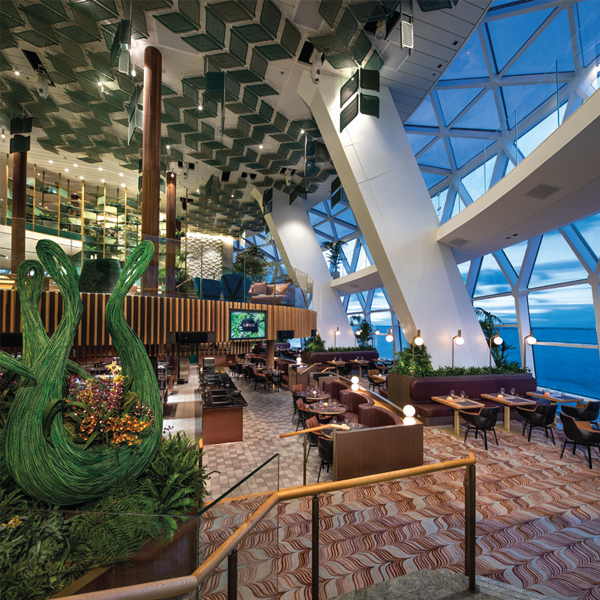 For future cruise dining experiences, dining times are likely to be staggered, and passengers will probably not be seated next to a group of strangers. Image Credit: Celebrity Cruises 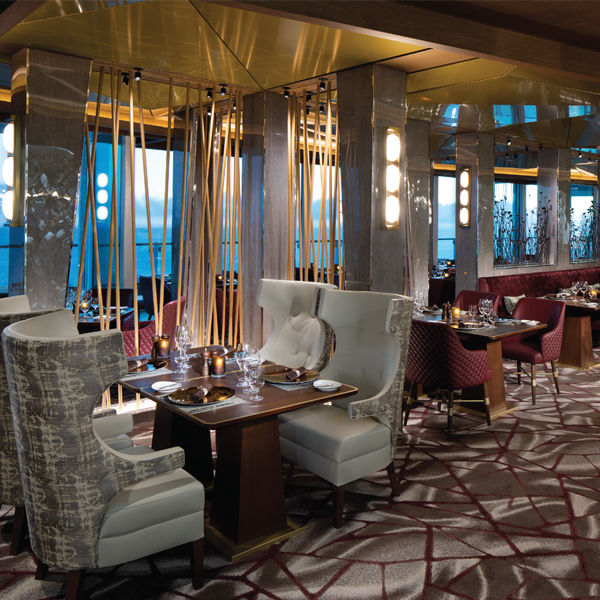 Celebrity Cruises plans to implement a digital menu that will be accessible on their app using a QR code, improving on-board hygiene while offering new opportunities for personalisation. Image Credit: Celebrity Cruises
Post to: