With many large cruise liners dry docked for the foreseeable future, and towns and cities along more populated routes still in lockdown, the expedition cruise sector looks well placed to capitalise on its growing appeal as an intrepid form of travel. Will Moffitt speaks to Monique Ponfoort, CEO of Aurora Expeditions, about how the traditional company model is being adapted to suit the current climate – and whether the expedition sector could thrive in a post-pandemic world.

From a satellite view the islands of Franz Josef Land look like fine grains of salt floating in a swathe of icy blue water. Located midway between the Barents and the Kara Sea, around 900km from the North Pole and some 3,000km from Moscow, these tundra-covered islands make up the world’s northernmost archipelago. The territory was first discovered by Austria-Hungarian explorers Julius von Payer and Karl Weyprecht, who named it after the Austrian emperor Franz Joseph I. It is a place of rising glaciers, polar bears, butting walrus colonies and beluga and bowhead whales.

The landmass forms a significant part – often a jawdropping finale – to cruise excursions in the Russian Far East, where travellers can glimpse the Russian base at Novaya Zemlya, the site of the most powerful nuclear detonation ever recorded, as well as visit working meteorological huts and inspect 10,000-yearold mammoth tusks. With temperatures slumping to −40°C and visitors cut off from most advanced forms of civilisation, this remote part of the Russian archipelago is an unusual holiday destination. For expeditionary cruisers, however, it is a popular one.

At Aurora Expeditions, crowned the world’s leading polar expedition operator in 2020, these cold excursions are selling exceptionally well. “We’re very optimistic in the demand that we’re seeing for Antarctica or the Arctic moving forward,” says Monique Ponfoort, CEO of the Australian expeditionary company. “It’s picking up now and that’s not just out of the UK. I’m seeing it out of the USA. And I’m seeing it out of Australia and in other parts of south-east Asia.”

Previously at Ponant, the French expeditionary outfit, Ponfoort took over as CEO of Aurora in October 2020. At the time Covid-19 had put itineraries on hold, leaving ships dry docked and immobile. Despite the chaos, she felt compelled to make the move. Her convictions were based on a deeply felt respect for Aurora’s “ethos” as a company and a desire for more personal autonomy. Stepping in as CEO, however, the task of anticipating what new problem the virus might inflict and assembling a roadmap for recovery was far from straightforward.

“[It was] about sitting down and looking at what the future could be like, and planning to adjust your course,” Ponfoort says, smiling at the seafaring metaphor. “And then [it was about] focusing on finding the right pathway strategically to take this outstanding brand forward.” Leading a company that has been going strong for over 30 years comes with its own pressures, but taking the reins during a global pandemic is something altogether more challenging – particularly as Ponfoort knew of Aurora’s reputation as a serious expeditionary outfit, well respected by experts and operational specialists.

“At Aurora, people had put many years into building a fantastic company,” Ponfoort explains. “[It] has just built a new ship and still has another one coming, so the focus on growth was and still is very strong.”

Sustained growth is something this small segment of the global cruise industry has been very good at, pulling in record numbers of guests and birthing increasingly adventurous itineraries over the past five years. According to CLIA, the number of trips to Antarctica, the Arctic, the Galápagos Islands and Greenland rose by almost one-third between 2017 and 2018, reaching 148,000 passengers – a trend that has been predicted to increase over the next five years. Alaska also experienced double-digit expansion with year-on-year growth of 17% in 2017 and 13% in 2018, accounting for more than one million passengers.

The vessels themselves have changed too. When expeditionary cruising began in the 1960s intrepid explorers such as Lars-Eric Lindblad, founder of eponymous Lindblad Travel, toured in old Soviet icebreakers with rickety bunkbeds. Now the sector can deliver a little more luxury. Operators such as Ponant and Silversea cater for affluent travellers in search of personal enrichment and comfort. On board their vessels guests can enjoy fine dining, luxury suites and cinema rooms.

Alongside established names like Aurora and Lindblad, mainstream cruise lines have also joined the party. Celebrity Cruises has its Xpeditions brand, specialising in Galápagos Islands tours, while Crystal Cruises was the first to send a large luxury cruise ship through the Northwest Passage in 2016.

“Generally speaking, they’re [already] avid cruisers and they’re looking to try something new and small ships appeal to them,” Ponfoort says. “I think you’ll always get a little bit of that because people are still discovering expedition cruising. And even before the pandemic, you had a big increase of people coming across to the sector.”

A growing sense of climate change awareness is a key driver of this demand, with guests seeking to glimpse the Arctic and Antarctica as the ice caps continue to recede. The expeditionary ethos also ties in with a trend among more affluent passengers who are seeking to enrich the mind and create lifelong memories.

While once expeditionary voyages were more like research tours for explorers, scientists and nature enthusiasts – Aurora was founded by Australian mountaineer Greg Mortimer in 1991 – those experts now deliver tailor-made itineraries to worldly travellers. That unique expertise is still very much the lifeblood of a successful expedition.

Take an Aurora cruise to the Antarctic and you can spend a day exploring the local scenery on Zodiacs, swimming with cold-water diving instructors or learning about glacier degradation from a marine climatologist. Aurora’s professional photographer can even show you how to get the perfect shot of a penguin. In the evening a historian can teach you about the pioneering exploration of Scott or Shackleton, or a naturalist can take you through the challenges of marine conservation in the region.

These experts are not merely the preserve of polar enthusiasts. Journey with Aurora to Raja Ampat and the West Papua Islands in Indonesia, and biodiversity experts are on hand to talk guests through the 1,500 types of fish in the ‘Coral Triangle’. The next day a local historian will take you on a guided tour of Ambon, the capital city of Maluku, one of Indonesia’s oldest provinces, where you can learn about the fraught history of Dutch colonial rule. While some guests are happy to explore every facet of the local climate and culture, others are particular about the type of trip they’re looking for. “Even within the expedition segment, there’s many different types of experiences. I think people are sitting at home and studying [a lot more],” Ponfoort says. “When people learn about travel they speak to their friends and they do their research, and we’re seeing a lot more of that. When people are calling us, they’re very knowledgeable and they know what they want.”

Invariably, the ships that venture into these remote locations need to be careful to avoid any damage to local ecosystems. This is particularly true in the polar regions, where expeditionary outfits must ensure that they don’t come aground and risk fuel spill.

“One of our key missions is to take guests on our voyages and educate them to make them ambassadors for the places they visit,” Ponfoort says. “We have to keep a minimum footprint and travel with respect for everywhere we go. We are conscious of all aspects of sustainability, from looking after our ships through to introducing special citizen science programmes where guests can actively be involved.”

New technologies are helping expeditionary teams avoid such mistakes. Aurora’s second purpose-built adventure ship, Sylvia Earle, named after an acclaimed marine biologist and oceanographer, is being built to world-class polar standards and is due to be launched in Ushuaia, Argentina, in October 2021. The vessel, which has a capacity of 126 passengers, also has a Tier-3 engine that is said to deliver an 80% reduction in emissions. It can also utilise virtual anchoring to hold its position instead of dropping an anchor onto the sea floor.

Other cruise lines are following suit. Set to launch this year, Ponant’s Le Commandant Charcot will become the world’s first electric-hybrid polar exploration ship. Named after French polar scientist Jean-Baptiste Charcot, the ship is classed as a Polar Class 2 icebreaker, making it capable of reaching the geographic North Pole. It also uses liquefied gas in transit and relies on battery power when stationary.

Ponfoort isn’t worried about Aurora’s competitors, though. Instead, her focus is on collaborating with her team of experts to deliver on a growing list of exotic itineraries. “You don’t have to look far in our company for a wealth of knowledge. And that’s what we do really well,” she says. “We sit and design every single part of the day-by-day itineraries, we discuss them and challenge them. And then we find these beautiful outcomes.”

Despite the chaos and complications caused by Covid-19, Ponfoort envisages a bright future for expeditionary cruises – but operators will need to weather the storm before the sunshine comes. “It’s been difficult for cruise operators,” she says. “It’s been very hard, but it’s about finding a pathway forward and being optimistic, determined and resilient.”

The Aurora Greg Mortimer, one of the company's ships designed for active expeditions. 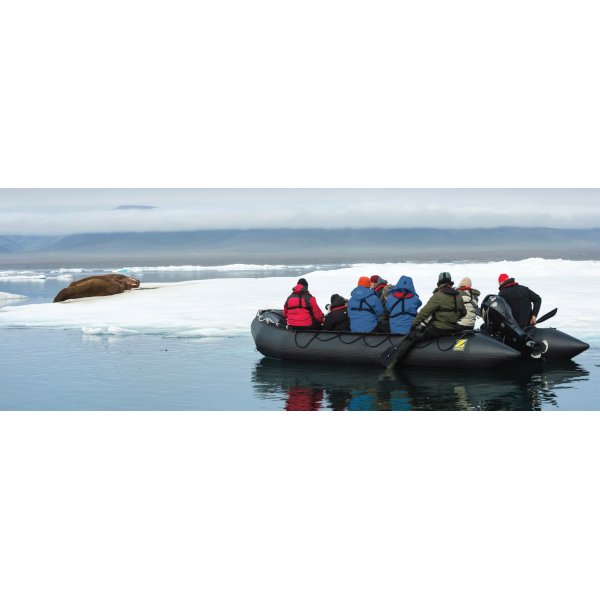 Guests on a polar cruise with Aurora glimpse a walrus in its natural habitat.
Post to: