An odyssey for the senses

More operators are investing in fun and immersive dining experiences to draw travellers to their cruise line, from interactive on-board adventures to once-in-a-lifetime excursions. Elly Earls speaks to Michael Bickel, president and CEO of TableMation Studios, which uses technological innovation to create a theatrical dining experience for Celebrity Cruises, and Christopher Prelog, president of Windstar Cruises, about creating unique dining environments at sea.

Whether it is buffet service or burger bars, the cruise food and beverage (F&B) model has tended to be traditional, with operators sticking to classics that are a reliable hit. In recent years, some cruise companies have started to up their game with speciality restaurants, partnerships with celebrity chefs, adventurous culinary excursions and a wider range of plant-based dishes. Others have taken it to a new level, investing in state-of-the-art technology that brings cruisers together over a shared experience.

At Disney Cruises, this has taken the form of interactive themed dinners that fully immerse families in the adventures of their children’s favourite characters. While the Frozen dining adventure brings the kingdom of Arendelle to life – including a recreation of the aurora borealis on the ship’s windows – the Avengers: Quantum Encounter requires guests to play an interactive role in a mission that unfolds around them, while digging into a diverse menu inspired by the Marvel cinematic universe.

On Celebrity Cruises, 3D projection mapping technology is used to introduce guests to Le Petit Chef. True to his name, the bite-sized character creates an animated version of each course on the diner’s plate, right before that actual dish is served. One of the brand’s newer shows, Le Petit Chef and Family, went viral on TikTok after being shared by a guest. In this particular show, the cooking process takes place over the four seasons and tugs on diner’s heartstrings.

“Over those four seasons, we follow Le Petit Chef in his life. He starts out as a young child meeting his wife, and as the seasons change, they grow older, they have a family, have grandchildren, then at the end there’s a family reunion. It’s very emotional and people are sitting there crying,” says Michael Bickel, president and CEO of TableMation Studios, which works with artists at artistic collective Skullmapping to create 3D-animated dining experiences for restaurants on shore and at sea.

For Bickel, the beauty of the experience is that it is communal. “Everyone’s laughing at the same time, everyone’s ‘aah’-ing at the same time. They’re elbowing the person next to them who they don’t know and talking to them. The world is a crazy place now and everybody’s on one side of an opinion [or] another side of an opinion, but here, everybody’s having a good time, everyone’s doing it together and to me, that’s what adds to the magic of what we do,” he says.

The process of creating such a unique dining environment at sea is an involved one. It starts with a meeting between TableMation, Skullmapping and Celebrity’s F&B team, led by Michelin-starred chef Cornelius Gallagher, who is consulted on both the script and the menu. Then follows a painstaking design process with 24 hours dedicated to every five seconds of the animation. “As Skullmapping develops the show, Cornelius Gallagher and his staff create dishes and send videos to us of how the dishes are made. The animators match that. It takes about a year from start to finish to create one show,” Bickel explains.

As many cruisers stay on a Celebrity ship for more than a week, the company decided that they wanted a few different options. “On most ships, guests can see a different show on Monday, Wednesday and Friday and have three totally different experiences,” Bickel says. But when Le Grand Bistro (on the newer ships) and Qsine (on the older ones) is not showing Le Petit Chef, you would not know. The projectors are hidden in the ceilings and it is only in the evening that the venues become TableMation theatres.

After testing the show on one ship in 2018, it was only six weeks before it became the top-rated restaurant on the ship. Celebrity immediately put in an order for the show for two more ships, then six. Le Petit Chef now entertains guests on 13 vessels, with a new show set to launch on the Celebrity Beyond, which sets sail in April 2022. “It’s called How to become the world’s greatest celebrity chef. It’s an amazing experience,” Bickel enthuses. “If it goes well, the guests will graduate and become great chefs.”

For Celebrity, its shareability certainly does not hurt. “When you look at the videos of people dining, half of them – unfortunately to some degree – are watching through their phones. They want to share this amazing experience and put it on their TikTok, Instagram, Facebook, all their social media platforms because it’s unique and that’s what people are looking for,” Bickel says.

From the unreal to the real

Of course, technology is not the only way to create an immersive culinary experience at sea. At boutique cruise line Windstar Cruises, which operates a fleet of small luxury cruise ships carrying up to 312 passengers and has always focused heavily on the F&B experience, guests find themselves immersed in a culinary landscape not just on board, but when they leave the ships too.

“It’s a bit counterintuitive, but it’s not just our job to feed guests on board but also know the best places to eat off our yachts,” says Windstar president Christopher Prelog. “It’s part of our DNA as a small cruise company that’s focused on bringing our guests closer to the world. So much of travel is about food.”

On top of its culinary offerings on board, Windstar provides shore excursions that go far beyond the typical bus tour and lunch experience. “We like to have a mix of wine, brewery and distillery tours, as well as hands-on cooking classes, plus really once-in-a-lifetime culinary moments, like dining in a tree pod served by waiters on zipline, or a helicopter journey to a Michelin-starred restaurant in a chateau,” Prelog explains.

Pandemic notwithstanding, guests are also invited along on market tours, where the chef walks them through the quality check process explaining what to look for in fresh fish, seafood and produce items. The market products purchased are then brought back to the ship and the chef creates a dish around it to feature on the dinner menu in the Amphora restaurant the same evening.

Given the size of the Windstar yachts, the range of dining options is also impressive. On its star plus class yachts – their largest, with a capacity of just over 300 passengers – there are five different dining outlets, plus the grab and go Yacht Club Café and complimentary room service.

A powerful and personal experience

It is Windstar’s themed cruises, created in partnership with the James Beard Foundation (JBF), a non-profit organisation that elevates and supports the people behind the US’s food culture, that go the extra mile.

“We’ve partnered with the JBF for more than five years, and it started as a way for us to align ourselves and our values with a respected culinary organisation,” Prelog explains. “We wanted to enrich our culinary experiences, giving our guests unparalleled access to the most cutting edge and accomplished culinarians in the industry.”

The current partnership works to include three themed cruises per year, hosted by a JBF-affiliated chef. These include chef demonstrations, which are typically on at-sea days, as well as a hosted four-course dinner one night of the cruise where the JBF chef adds four of their own dishes to Amphora restaurant’s nightly menu. Each of the themed cruise chefs also provides special recipes that are then featured on Windstar’s menus across the fleet and sailing regions.

Windstar Cruises’ 2022 line-up is an all-female trio, including Atlanta chef Jennifer Hill Booker, San Francisco’s Tanya Holland, and Boston’s Irene Li. All three are acclaimed chefs, cookbook authors, reality TV personalities, business owners, philanthropists and changemakers. “What is unique is that each one has a special connection to the places they are sailing, whether through food or family heritage, this creates powerful and inspiring personal experiences that our guests will never forget,” Prelog notes.

It all feeds into the same idea Bickel comes back to when discussing the animated experience that is proving so popular on board Celebrity vessels. In order to set themselves apart, cruise operators are increasingly opting to create immersive experiences around food that passengers will not find anywhere else, on land or at sea. “Coming out of the pandemic, they want to go out and have an experience, they don’t just want a meal, and we are right there with that,” Bickel concludes. 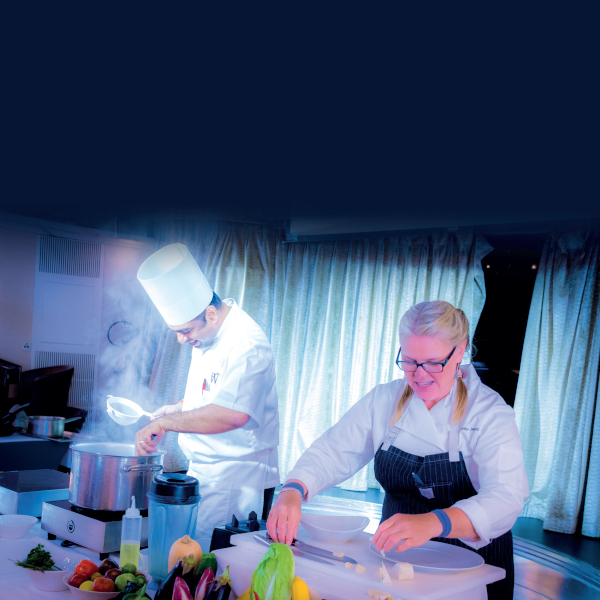 Award-winning chef Jennifer Jasinski demonstrates the art of cooking for passengers aboard a Windstar Cruise ship. 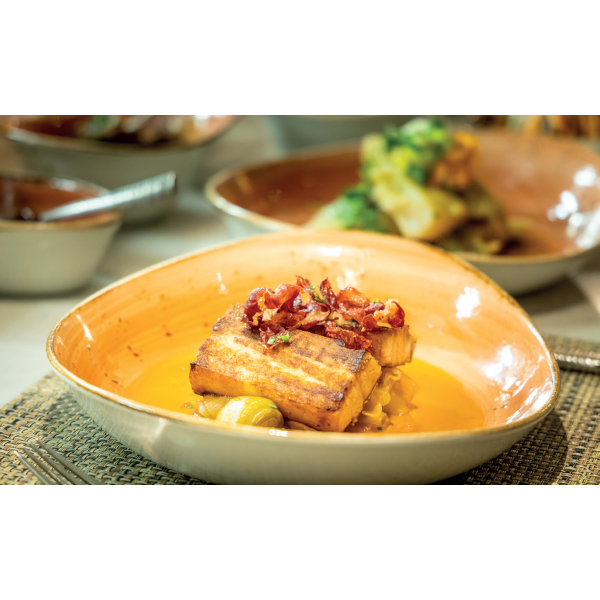 Cruise companies provide an array of foods, from favourites like pork belly to vegetarian and vegan dishes. 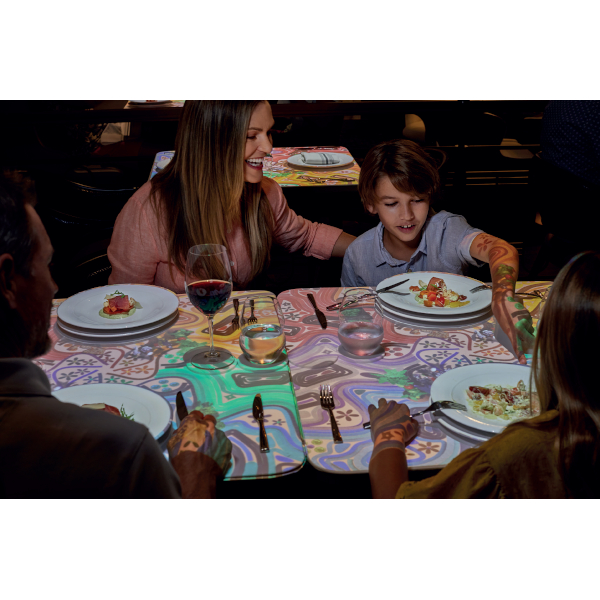 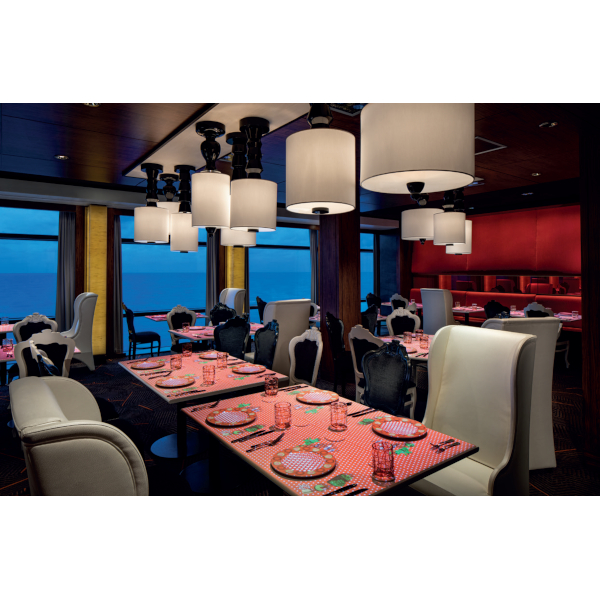 Aboard Celebrity Cruises, Le Petit Chef provides passengers with a culinary experience both delicious and visually dazzling.
Post to: