An ocean of opportunities

With low levels of Covid-19 and around two million citizens set to receive a vaccine in the next few months, things in New Zealand are almost back to normal again. For its cruise industry, that means a renewed focus on local travel. Andrea Valentino talks to Sarina Bratton, chair of Asia-Pacifi c for Ponant, and Debbie Summers, chair of the New Zealand Cruise Association, about why the island nation proved so irresistible to travellers before the pandemic, the potential for Trans-Tasman cruising to boom again – and how safety measures must be accompanied by long-term infrastructure investments.

On 8 October 1769, a rickety wooden ship dropped anchor off the moorlands of New Zealand, at a cove the Maori call Turanganui- a-Kiwa, or the Great Standing Place of Kiwa. After coming ashore, the European newcomers, accompanied by a talented draughtsman from Tahiti, quickly found themselves in trouble. A fight broke out, some of the Maori were killed and the arrivals fled back to their boat. Yet from this inauspicious start, Captain James Cook and his men would learn more of this new land and the people who lived there, and forever transform the history of Turanga-nui-a-Kiwa.

New Zealand has had an intimate relationship with the sea ever since – how could it not when the nearest landmass is 1,000 miles of ocean away? From Cook and his draughtsman, through to the indentured servants who came in the nineteenth century and the country’s successes in the America’s Cup, this is a land, as Mark Twain once put it, that “lies by itself, out in the water.” It feels natural, then, that in recent times New Zealand has seen a swell in cruise tourism. In 2018 alone, the industry leapt by 28%, contributing NZ$569.8m (£298m) to the national economy. With secluded beaches, natural beauty and over a dozen ports of call, it probably felt like the bonanza could go on forever. Then Covid-19 struck, leaving itineraries on hold and vessels motionless. Yet even as much of the planet is still trapped in lockdown, New Zealand’s cruise ships are already setting sail once more. Welcoming passengers on local trips, operators hope to begin cruises to Australia again soon. And why not? Having taken care to totally flatten the curve of coronavirus at home, the country’s ships are now starting to reap the rewards – though there’s still work to be done before New Zealand can truly take its place at the top table of cruise destinations.

“We have many cruise-friendly ports... [They are] wildly different in history, geology and geography, making for exciting itineraries.”

Even a decade ago, New Zealand hadn’t really made its mark on international cruising. Isolated from traditional markets, the country only received 100,000 passengers in 2010. Just nine years on, though, and everything had changed. In 2019, 325,000 travellers explored the country by ship, something Sarina Bratton puts down to a boom in the neighbourhood. “A lot of this growth has been spurred by significant additional cruise ship deployment for Australia, with New Zealand also benefiting from the capacity,” explains Bratton, chair of Asia-Pacific for Ponant.

An aging population and excellent exchange rate mean that one in every 17 Australians now takes a cruise every year. More to the point, many of these tourists are clearly attracted to their Antipodean cousins. As Bratton notes, 49% of New Zealand’s cruise passengers arrive from Australia, likely a combination of geographic proximity and cultural familiarity. All the same, it’d be wrong to imply that New Zealand’s recent victories are simply the work of outsiders. “Although we are a small country, we have many cruise-friendly ports all within a night’s sail or less of one another,” says Debbie Summers, chair of the New Zealand Cruise Association. “These are also wildly different in history, geology and geography, making for exciting itineraries.”

Look at an itinerary from 2018 or 2019 and you can see what she means. One morning you’re in Doubtful Sound, a fjord where forests tumble down to the sea almost vertically, like a thunderstorm of green. The next you’ve reached Port Chalmers, a handsome colonial town flanked by hills.

The third you’re at Akaroa, where hundreds of rare dolphins frolic in the harbour. And all this isn’t even counting New Zealand’s cosmopolitan cities, or the wild places further south. As Bratton notes, the South Island port of Dunedin is a convenient spot to start trips down to Antarctica, an area of “extraordinary wildlife” where people can visit cabins once used by explorers like Scott and Shackleton.

At the same time, New Zealand’s cruise industry has been nurtured by the locals. For starters, politicians and insiders have been careful not to tarnish their country’s green credentials. At Ponant, for instance, Bratton and her colleagues have instituted a “zeroimpact disembarkation protocol” aimed at preserving “delicate environments and cultures.” That’s shadowed by work with local communities. In Auckland’s Hauraki Gulf, environmental groups and cruise lines collaborated to slow down incoming ships, protecting nearby whales. Between that and the country’s other triumphs, you can probably forgive the official in the New Zealand port of Tauranga who expected a “jam-packed” 2020 – just weeks before coronavirus reached his shores.

In April last year, as coronavirus challenged hospitals from New York to Bergamo, the government of New Zealand had yet another problem on its agenda. A month earlier, the Ruby Princess, a Carnival Cruises ship, visited five New Zealand ports before returning to Australia – only for 16 cases of coronavirus in the North Island town of Hawke’s Bay to be linked back to the vessel. Led by Prime Minister Jacinda Ardern, the New Zealand government even threatened to sue Carnival for the fiasco, though in the end it apparently left the job to private lawyers.

“There is huge potential to start cruising again in our region, as soon as it is safe to do so.”

Though New Zealand has kept coronavirus deaths remarkably low, with limited itineraries and copious safety regulations, it will be a cautious reopening from the land of the long white cloud. Nonetheless, the experts seem confident that slow and steady can ultimately win the race. “We went hard and fast early,” says Summers. “This must now give us a great opportunity to restart soon.”

That’s especially true, she adds, when Australia rejoins the party. “There is huge potential to start cruising again in our region, as soon as it is safe to do so. We have no community transmission here in New Zealand and Australia is getting closer and closer.”

Happily, there are signs that the Trans-Tasman route that brought New Zealand such joy before 2020 may soon be active once more. Calls for a safe return to Trans-Tasman cruising have been growing louder since a two-way air bubble was agreed between the nations, enabling fliers to move quarantine-free between both countries. Joel Katz, managing director for Australasia at Cruise Lines International Association called the agreement a “positive step forward for tourism in Australia and New Zealand, particularly for the many thousands of travel agents and other businesses that have been devastated by border restrictions over the past year”. However, Katz also highlighted what he felt was a “lack of progress” being made towards a responsible resumption of local cruise operations between the two nations.

Others consider the resumption of air travel between the countries a sign that cruising can follow suit, although how soon remains the million-dollar question. Australian-based Coral Expeditions has confirmed that it is seeking approval for a winter voyage in New Zealand and an early January departure.

Meanwhile, Kevin O’Sullivan, CEO of New Zealand Cruise Association, told Radio New Zealand that the 2021–22 season could be viable, with New Zealanders accounting for 10% of passengers and Australians 50%.

So, does that mean New Zealand can reclaim its spot as one of the hottest cruise destinations around? Summers certainly thinks so – even if coronavirus rears its head once again. “I believe that cruise success [relies] partly on its ability to be nimble,” she explains. “If we have to go into further regional lockdowns, then cruises can shift to another port fairly easily.”

Not that New Zealand’s cruising reprisal is without its challenges. Some insiders have grumbled about the lack of proper infrastructure in the country, particularly around getting passengers from remote ports to city centres. Ship capacity is another challenge. The New Zealand Cruise Association tried to build a dolphin structure in Auckland, for example, but was rejected by the local council. Yet promises to come up with a decent alternative, and a shiny new cruise berth near Christchurch, suggest that New Zealand’s cruise industry will only keep growing. If Cook’s visit back in the 18th century heralded one transformation of this land alone, you wouldn’t bet against another soon enough. 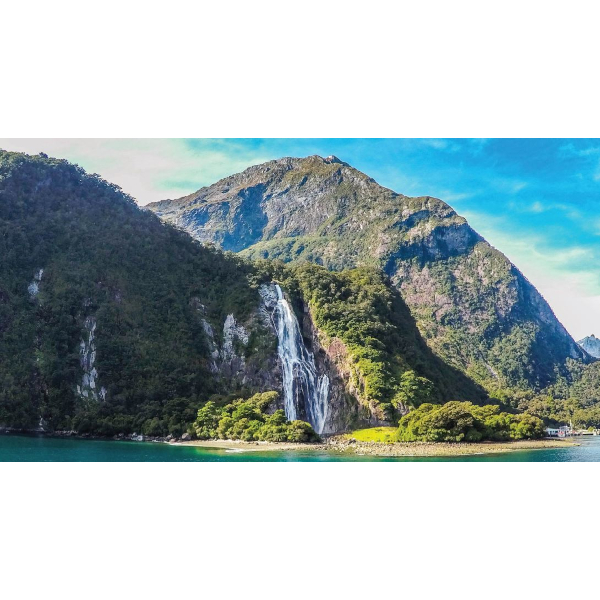 Milford Sound, one of New Zealand's most picturesque natural attractions. 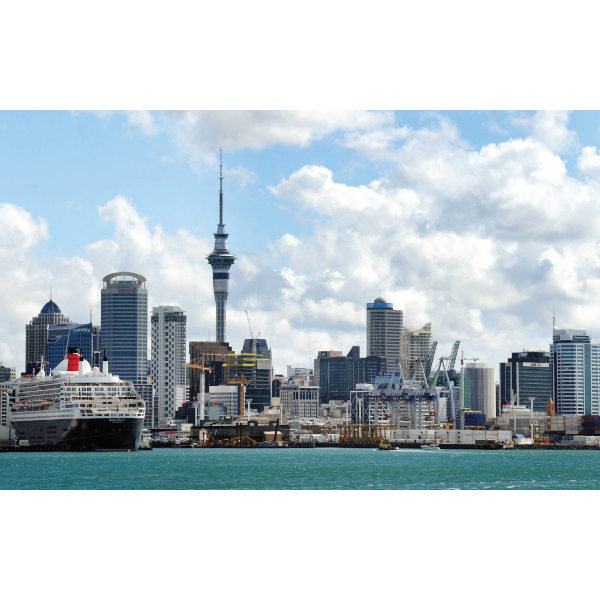 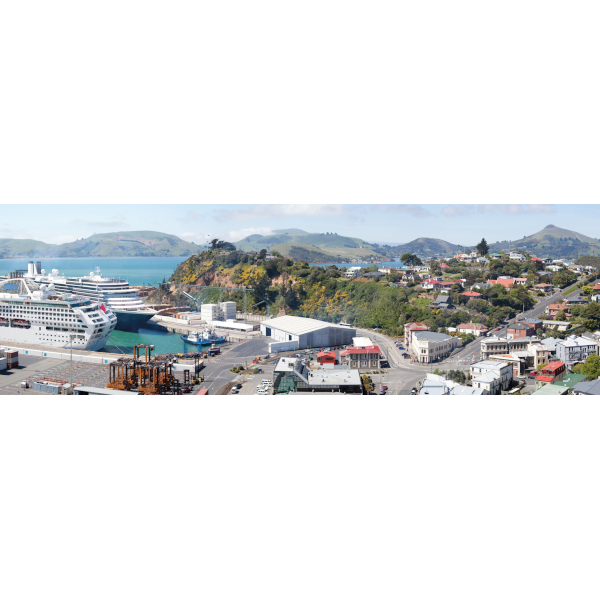 Cruise ships docked at Port Chalmers, a suburb district of Dunedin.
Post to: