Recent regulations have made cruise holidays more accessible, but for guests with special needs and mobility issues, commitment to the spirit of the law is just as important as compliance with its letter. Tim Gunn talks to Ronald Pettit of Royal Caribbean, Special Needs at Sea’s Andrew Garnett and Carnival’s Vicky Rey about ensuring that all guests are treated with dignity.

This is an article about accessibility on cruise ships. Its first three paragraphs are written in the style of a social story, a communicative tool that Royal Caribbean uses to help guests with autism prepare for the differences and complexities of life at sea. Social stories are written in the first-person and make information clear, concrete and appropriate for the reader, rather than relying on implication or assumed knowledge. It’s helpful to consider how the way I address people can impact my understanding of their needs.

It’s a legal requirement for operators to accommodate disabled passengers, but I don’t have to read this article to realise that. This article is about using the law as a starting point for making cruise holidays truly inclusive. That isn’t easy. Depending on where a ship docks, regulations like the Americans with Disabilities Act (ADA), the UK Equality Act and EU Regulation 1177/2010 prevent discrimination, but accessibility can still mean different things to cruise lines operating in the same regions.

In this article I will find quotes from representatives of two cruise lines and a disability travel organisation. All three of these people are working to improve accessibility on cruise ships. Even though they may have different needs, everyone who boards a cruise ship wants to have the most enjoyable holiday possible.

For Ronald Pettit, director for disability inclusion at Royal Caribbean, the goal is to come as close as he can to giving people a vacation from their disabilities. “I know I can’t take that away,” he says, “but what we want to do is make cruising effortless and easy, as well as accessible.”

That’s the thought process behind Royal Caribbean’s Autism Friendly programme and, with it, the company’s cruise-specific social story. In a purely functional sense, Royal Caribbean cruises were not necessarily inaccessible to autistic people and their families before the programme started. As Pettit recalls, when Royal Caribbean began working with specialist travel agency Autism on the Seas in 2007, it realised that guests with special needs that it didn’t directly cater for were already holidaying on its ships – it just hadn’t thought to identify and address them specifically.

Pettit is also Royal Caribbean’s director of ADA compliance, but, as he sees it, “compliance is really only about a minimum level of accessibility. It’s the foundation that accessibility is built upon, but it’s not the final standard.” Instead, he thinks of his work as a journey, passing through accessibility compliance on its way to true disability inclusion.

“Compliance is really only about a minimum level of accessibility. It’s the foundation that accessibility is built upon, but it’s not the final standard.”
Ronald Pettit

That’s an apt metaphor for the cruise industry, and the social story form is itself a powerful navigational tool to use along the way. Dr Carol Gray, its originator, has argued that by producing social stories authors “learn to abandon many of the typical social assumptions that work so well most of the time”, and focus intently on their audience’s experience as valid and worthy of respect.

The cruise industry hasn’t always respected the disabled experience. Shortly after he founded equipment provider Special Needs at Sea in 2007, CEO Andrew Garnett’s offer to help an unnamed operator improve its accessibility service was rejected by a representative who told him disabled people were not its “type of clientele”.

Since then, Garnett believes the reality of ageing passenger demographics has made that sort of discrimination economically as well as socially untenable. “It was viewed more as a burden in the past,” he explains. “But the baby boomer generation has affected our culture in so many ways, and as they come to need these services, they’re doing it again with regard to our understanding and acceptance of accessibility.

“If you were to ask the majority of our customers if they had a disability, they would emphatically say no,” Garnett continues. “Maybe they only need a mobility scooter when they’re going to be walking more than they’re accustomed to, or they sleep with oxygen but don’t consider it a special need in that sense.”

As a result of his work, even Garnett’s understanding of accessibility has developed in recent years. He remembers a call he received from a cruise customer who rented a mobility scooter she didn’t use on her trip. “Immediately in my mind I was like, ‘Oh god, she’s calling for a refund,’” he says, “but she wanted to rent another scooter.”

Politely, Garnett asked why the customer was so keen to pay for something she didn’t seem to need. She told him that, though she could still walk reasonably well, her ability to do so was declining, and having the scooter meant she didn’t need to worry about conserving energy or avoiding tiring activities. Her aim was to push herself to walk for as long as she could, and having access to a mobility scooter actually helped her do so.

Pettit has observed something similar in his work with Autism on the Seas, which plans to run 37 staff-assisted special needs cruise packages on Royal Caribbean ships next year. On top of the line’s autismfriendly offering, which is most suitable for higherfunctioning individuals, these cruises provide a specialist carer for every two or three passengers with developmental disabilities.

“Often people just don’t know what it’s going to be like to sail with an autistic family member,” Pettit explains. “Many families won’t even go to the theatre or to a restaurant because of all the challenges, but Autism on the Seas’ staff-assisted cruises provide that initial vacation option. And many families find that they only need to go on one to realise they can cruise without that support.”

Moreover, with ships becoming more and more like destinations in themselves, Garnett argues that cruises are actually the best options for accessible holidays. Instead of having to find suitable hotels, meals, routes, tours and activities in a number of different locations, cruisers get to travel with their accessible accommodation, their gluten-free options, their tailored programming and their wheelchairfriendly tour agency.

“Especially when they’re prescribed oxygen, people assume they can’t travel anymore,” Garnett says plaintively. ”That’s what we’re trying to combat, because we want to make sure that everybody understands you don’t have to experience the world only on television or the internet – you can actually go in person. And I think that a cruise vacation is the best vacation for someone that maybe has a little bit of difficulty.”

As Carnival’s vice-president for guest care and communications, and its ADA responsible officer, Vicky Rey is tasked with making sure the line capitalises on the advantages it has over land-based hospitality providers. As she sees it, both of her roles require the same compassionate and sensitive approach to ensuring each guest is treated as a unique individual with their own perspective, whatever their accessibility needs.

In practice, however, that’s as much a logistical and managerial task as anything else, requiring Rey’s communications teams in Miami to maintain constant contact with ships all over the world, as well as people considering booking and guests that have already returned home.

“It’s one guest who is having a journey, so to them it should be a cohesive experience, and not a precruise part that has to be repeated on board, or a scenario where something happened on board that the post-cruise team doesn’t know about,” Rey explains. This is a crucial consideration for any operator aiming to, as Pettit puts it, help people take a holiday from their disabilities. Integrated pre and post-cruise communications means individuals and families are never stuck reiterating their requirements and calling attention to what makes them different to other guests.

That said, while many of Garnett’s clients are unwilling to consider themselves disabled, there are also holidaymakers who think of their disabilities as important parts of their identities.

“Believe it or not,” says Rey, “people are very attached to their mobility devices. In some cases they may not want to part with them.” Particularly when guests don’t disclose that they use a wheelchair or mobility scooter until check-in, such situations require Carnival staff to be good listeners and creative problem-solvers, working out where and how people can transition between devices. That’s why Rey draws attention to the importance of Carnival’s hiring policies and ADA training schemes in making their cruises inclusive and accessible.

“Even our president goes through ADA training,” she notes proudly, “which is important because as we build and refurbish ships, everybody needs to have a good understanding of the programme that we want to provide.”

Similarly, at Royal Caribbean, Pettit is closely involved in ensuring innovation doesn’t come at the expense of inclusion. On the company’s Oasis-class ships, he’s successfully advocated for lift-equipped two-storey suites, wheelchair access to the Aquatheatre ‘splash zone’ and even wheelchair spots on the on-board carousels. Such work requires the access team to assist and advise designers and shipyards to ensure nothing gets lost in the translation from drawing board to open sea.

Nevertheless, even as he points out that economic concerns have driven the industry to embrace accessibility, Garnett cautions that the same interests are likely to function as a limit on the accommodations operators will make. “These are publicly traded companies, so they have to answer to the shareholders and make as much profit as they can,” he explains. “By making larger staterooms, they will have to have fewer staterooms, which in turn means lower revenue.”

Garnett does expect that non-accessible tours and activities at ports of call will become less competitive in the coming years, but he thinks the most important change stemming from the increasing interest in accessible cruising will be improvements in mobility devices and other personal technologies – which could work to improve the lives of guests at home, as well as on holiday.

But Pettit has a counter. “We’ve learned – like any business out there will ever learn – that once a person with a disability and their family find a company that accommodates their needs, they become brand loyal.” In fact, Royal Caribbean sees a noticeably higher proportion of its disabled guests return and join its Crown and Anchor loyalty programme than other passenger segments. It would be churlish to think that they do so simply because the line is ADA-compliant.

“It has gotten easier to work with our designers over time,” Pettit says, “but there are still challenges as we move forward. The regulations are a foundation, but when you come up with something new you can’t rely on formal guidelines, so you have to take the spirit of the law and work out how to apply it.” 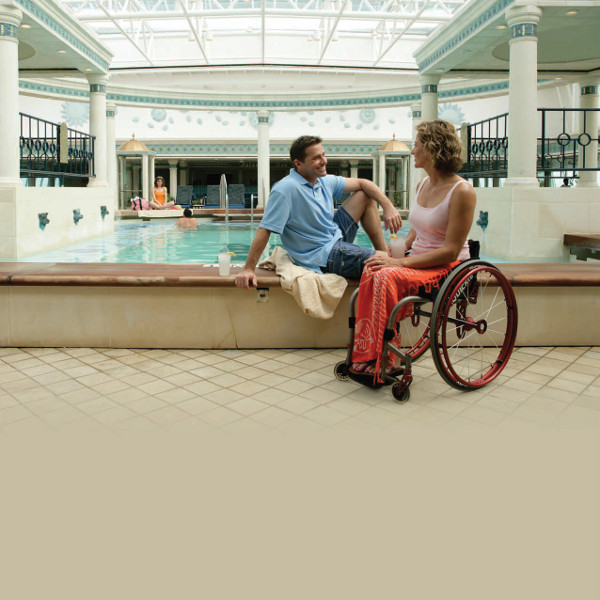 Royal Caribbean sees a higher proportion of its disabled guests return than other passenger segments. 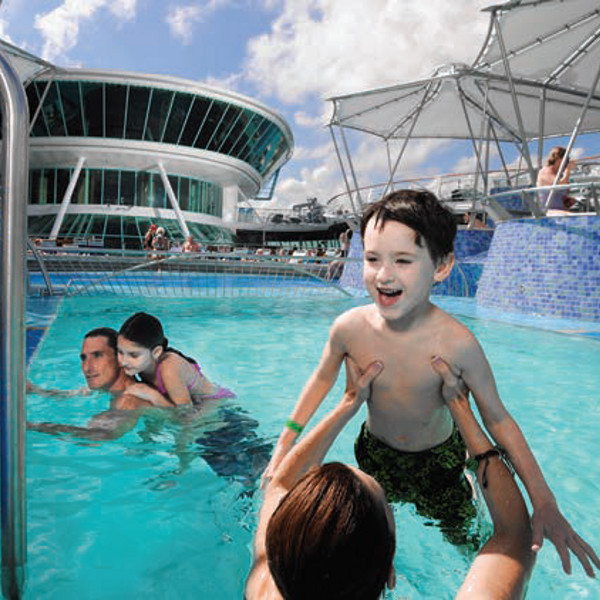 Royal Caribbean uses social stories as a way to help guests with autism prepare for life at sea. 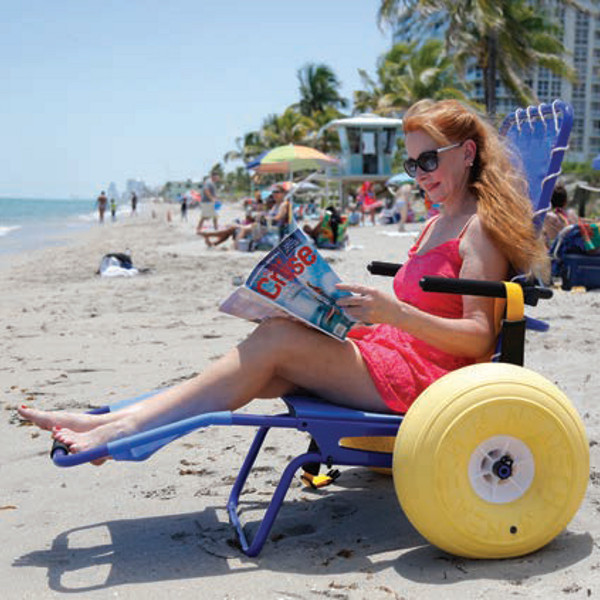 Special Needs at Sea tries to ensure passengers are free to travel wherever they desire with any assistance they need.
Post to: